Tips for Inshore Fishing in the Winter | Great Days Outdoors

Tips for Inshore Fishing in the Winter

In the winter months, it pays to know….

Inshore fishing in the winter is not for everyone. Along the Gulf Coast, the water temperatures are usually at their lowest from late December until the first part of February. The part that gets most people is the combination of cold, wind and wet. All of these contribute to the “on the water” cold that you have to get used to.

However, a benefit for winter inshore anglers is the potential for incredible winter fishing. Especially for trout and redfish still existing along Alabama’s numerous creeks, rivers, and bayous.

I can still remember what the old-timers used to say about Fowl River. The big trout would turn on when you had ice on the eyes of your rod. Now that’s cold!

There are several reasons why I enjoy fishing for speckled trout and redfish in the late winter months.

I can remember a week-long winter period in the deep bend of a river. For hours we would catch a fish on nearly every cast. Most of the fish were from one to two pounds, but you could have culled a ten-fish limit weighing 30 pounds.  The best part of fishing for winter trout and redfish is you don’t need live bait to catch quality fish. Also, when you locate post-cold front schools, the number of fish in place can be huge. And the fish aren’t going anywhere.

Let’s take a look at how to get dialed in on inshore fishing in the winter cold. 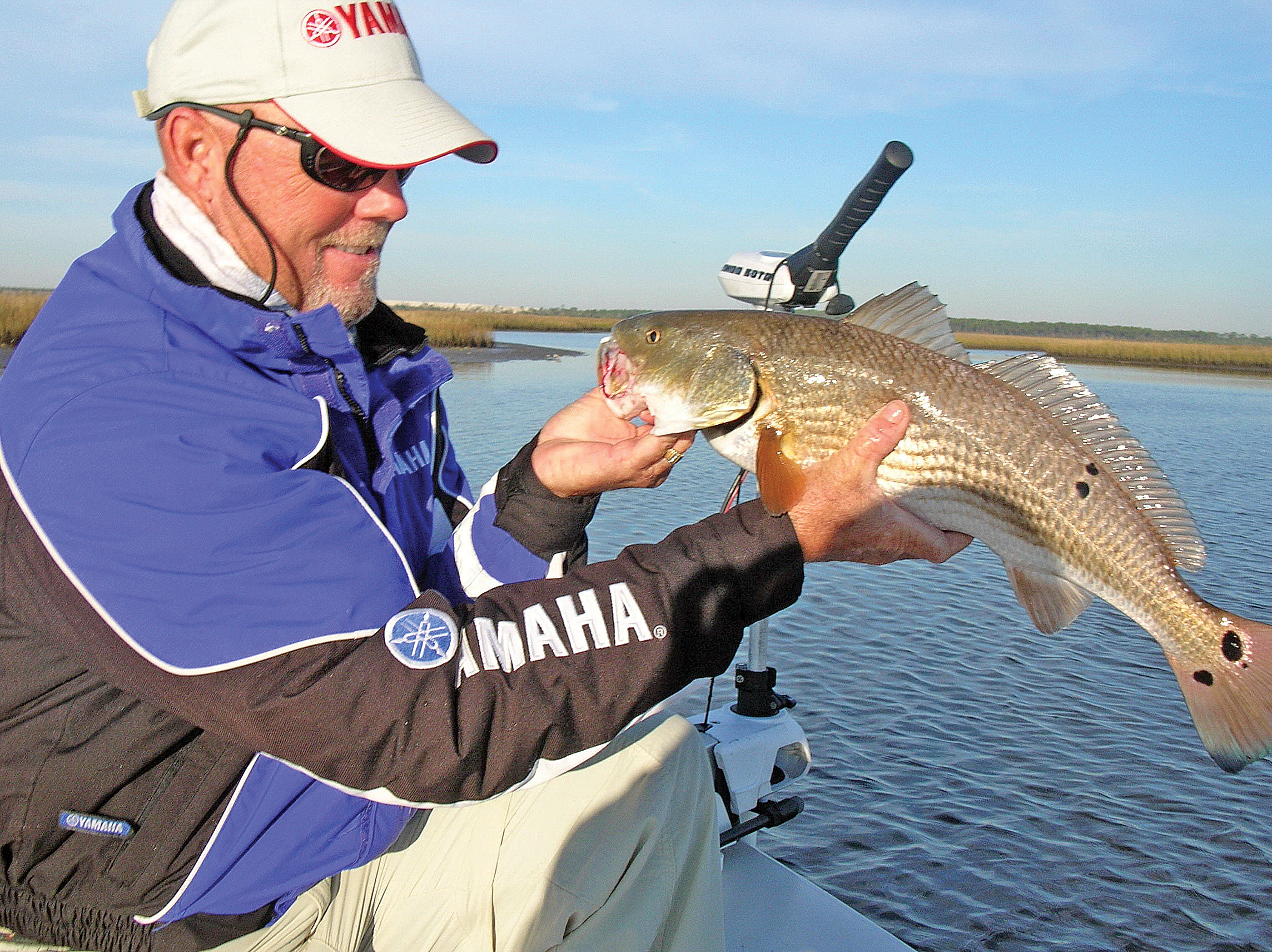 For inshore fishing in the winter months, the fish are easy to locate because they will seek out and hold along the deeper sections of the rivers and bayous. This task becomes even easier in smaller bodies of water because most of the unproductive areas can be eliminated quickly. Usually, in smaller rivers and bayous like Fish River and Bon Secour River on the east side of Mobile Bay, plus Fowl River and the smaller bayous along the Mississippi. Sound to the west, the fish tend to stage in the outside bends where the water is considerably deeper than the surrounding area. This is especially true post-front on bluebird days or on a falling tide.

Keep in mind “deep” is relative to what is available to the fish in the surrounding areas. I have a classic winter location I go to loaded with nice trout and reds every winter. This is a prime example of the deep-is-relative principle. I found a little four-foot channel wending its way through and surrounded by a large shallow flat. It literally becomes the only “deep water” for nearly a half-mile when the tide falls or the weather gets cold. The fish in the area use the channel to travel back and forth to the largely flat and to the surrounding tidal creeks to feed on warmer days, or if the water is high on an incoming tide.

Along rivers having lots of deeper water, I concentrate my fishing along the ledges forming tide lines. Deeper rivers can be harder to pattern at times but the payoff is usually found in bigger fish and the ability to withstand more fishing pressure. If the tide is falling, the fish will usually position themselves along the drop, whereas on an incoming tide that’s most of the way in, the fish will locate themselves on top of the ledge.

One of the most productive areas to find fish in the winter months is along areas with a shell bottom. All types of inshore species love hard-bottom areas. Many anglers make the mistake of thinking that oyster shells have to be present. But since many rivers and creeks don’t have oyster habitat available, anglers overlook a productive area loaded with fish. No doubt, oyster-laden bottoms are one of the best places to find trout, and especially redfish in the winter months. However, great fishing can be found around areas with clam-shell bottoms as well. Believe me, fish don’t know the difference.

Certain areas along the Mobile Delta are loaded with hard, clam-shell bottoms, which in turn are loaded with winter fish. North Pass and the lower sections of the Tensaw River and Spanish River bars are prime examples.

One of the best ways to locate those productive areas is to get out on a low tide when coinciding with a hard north wind. When these two events merge, you won’t believe what it uncovers.

Putting Fish in the Boat

Once you have located a school of winter fish, you might ask, What is the best way to catch them?

Fortunately for most of us, getting a big school of fish to eat in the winter months isn’t too difficult. Sometimes the fish will get finicky after a high-pressure bluebird day rolls through. Eventually, they will adjust later in the day and begin feeding. To me, finding the right presentation for that particular day is the key to consistently catching fish.

On most cold days, when the water temperatures are in the lower fifties, a slower bottom- bumping presentation is probably best, especially if the fish are positioned along the bottom of the channels on a falling tide. When that occurs, look for plastic grubs and jigs to produce best. If the tide is rising later in the day when the afternoon is warmest, look for the bigger fish to move up on top of the flats near deep water or along oyster bottoms. When that occurs, I will use bigger baits. Try a suspending jerkbait or swimbait because the bigger fish will be feeding on mullet almost exclusively.

Something I discovered about winter fishing is you normally catch bigger specks in the last half of the incoming tide. I really like to work the tide lines that mark the presence of current along a depth change. Many like to troll to locate fish. I prefer to use the quiet power of the current or a trolling motor to cover water. Remember, the clearer the water, the quieter you’ll have to be, and the winter months produce the clearest water of the year.

One of the best tips I can give you about locating fish on new water is this; slow down on fishing in new areas and you should start getting some bites. If you do not get a bite, I can guarantee if you slow down and rework the same area, you’ll begin to put fish in your boat. People are known to spend too much time working unproductive water the right way instead of fishing more of the right water the wrong way.

Another important tip to remember: when conditions and water temperatures don’t change drastically in the winter months, specks and reds won’t be going anywhere. They will stay in place and use the same areas day after day. 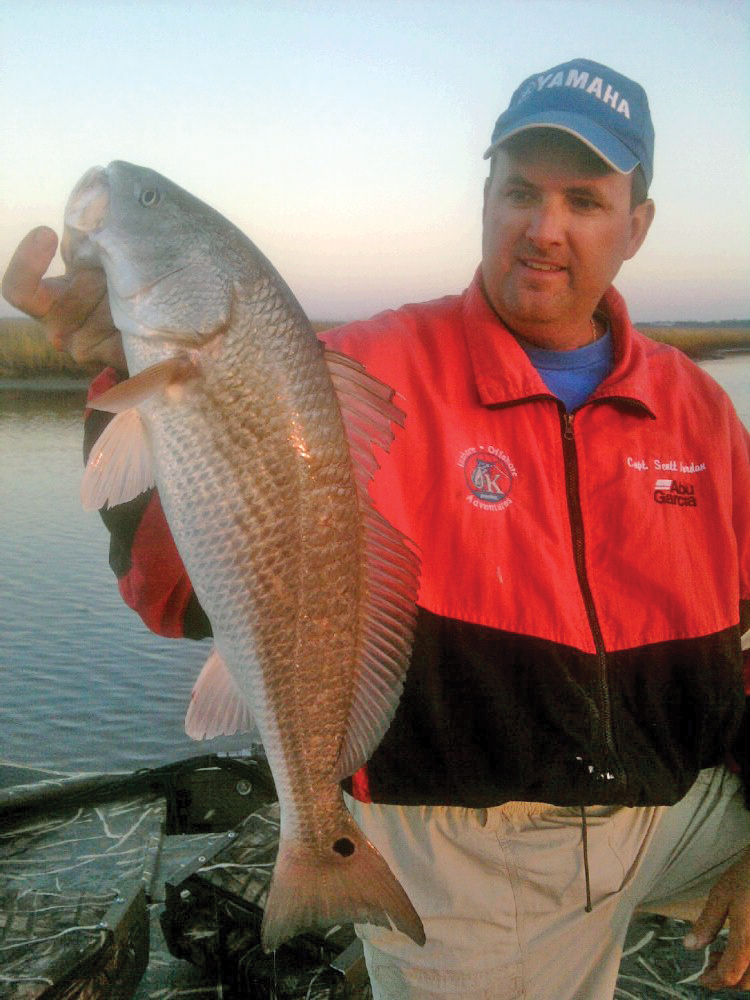 The author targets late winter trout and redfish along hard shell bottoms during a rising tide. This photo was taken by Captain Scott Jordan.

I know there are several theories on the best way to stay warm on the water. But on the coast, it’s hard to beat a good thermos of hot chocolate to warm up with and a good plan for layered clothing. I rarely wear gloves when fishing but hand warmers will help keep you casting on the coldest winter days.

I always have an assortment of jigheads from one-half to one-eighth ounce on hand to cover the slower presentations and will catch most of my winter trout on those. Be sure to have curly tails, paddle tails, and grubs with straight tails such as flukes and Bass Assassins. You never know what the fish will want under the conditions on any given day. Be sure to have plenty of Berkley Gulp! products on hand because of the scent factor. Gulps! will make a difference for you on certain days, especially on redfish.

One of the best ways to catch a big winter trout is to throw a big mullet-imitating plug. I feel like big trout will feed on mullet because they know to eat something big every few days to conserve energy. Throw big baits like MirroLures and Catch 2000s on an incoming tide and hold on!