Swordfish: Gladiators of the Sea

Xiphias Gladius: A Fish Aptly Named for Being the Toughest and Meanest Sport Fish, the Broadbill Swordfish.

In the past, swordfishing used to be a mere afterthought to Gulf Coast outdoorsmen simply because there weren’t many of them to be caught in the Northern Gulf before 2001. In November 2000, the National Marine Fisheries Service (NMFS) implemented a ban on long-line fishing in several key areas in the Gulf of Mexico, including Desoto Canyon. This is an area now teaming with swordfish. NMFS also implemented bans along the East coast in the Atlantic. This caused an increase in both the size and number of swordfish in the Gulf. Likely, due to their highly migratory nature. Since the ban in 2000, anglers have noticed an impressive, steady increase in the number of fish in the Gulf. The average size increasing every year, as well.

Swordfishing: Not Your Normal Day of Fishing

Swordfish spend the majority of their lives deep in the water column sometimes sounding to 2,500 feet in pursuit of prey. Special organs keep their eyes and their brain warmer than the surrounding water. This unique adaptation improves their vision while patrolling the depths. This makes them dominant deep-water predators that prey on squid, cephalopods and a variety of benthic fish species. At night, swordfish migrate toward the surface to feed on squid and various species of baitfish. Fishermen have the best opportunity for swordfishing at this time.

Swordfish trips present a nice change of pace from the typical fishing trip. There is nothing like a calm night drifting lazily in the Gulf under the billions of stars. The most beautiful, amazing creatures are seen during night. The aquarium behind the boat is quickly forgotten once the clicker on the reel sounds off. This is the signal for the start of the fight. 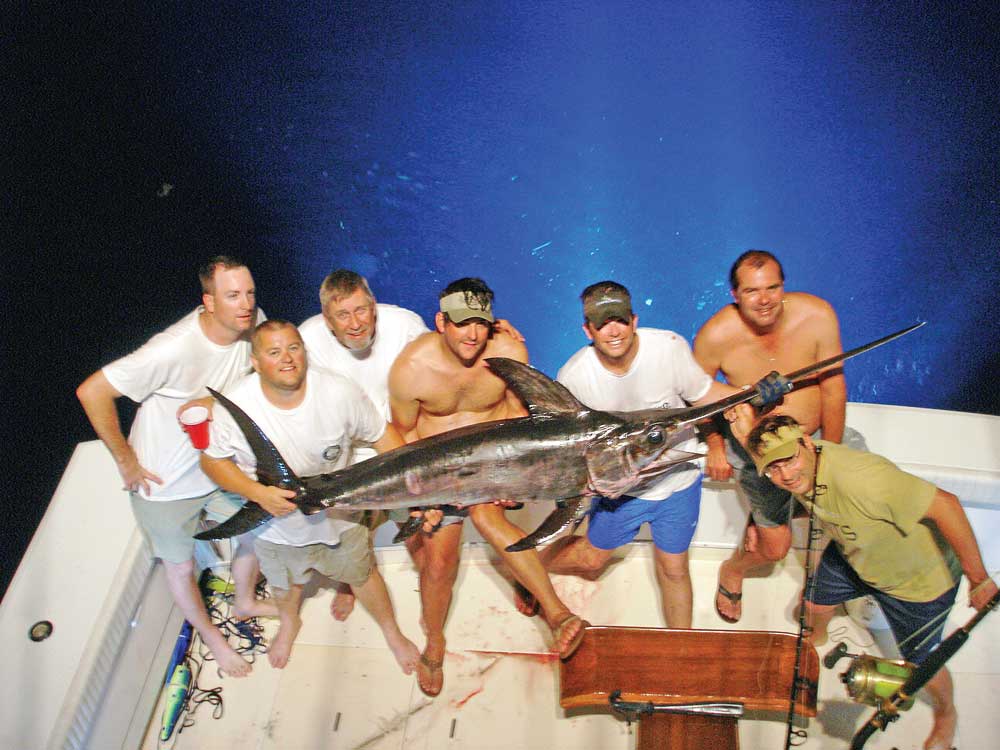 Anglers have a better chance landing a swordfish at night. Photo by Jim Durham

Where and How to Set Up

There are several options for fishermen leaving from any of the ports along the Alabama coast, as well as ports in Florida between the Alabama state line and Panama City when heading offshore for a night of swordfishing. One of the best areas for swordfishing in the northern Gulf is Desoto Canyon. Desoto Canyon runs east to west and is about 60 to 65 miles offshore. The far eastern end of Desoto Canyon comes to a sharp point, forming an area called The Spur. It’s a very good area to concentrate on. This being due to deep-water currents hitting the sheer face of the canyon wall, resulting in nutrient upwelling. Other good areas include The Steps, Alabama Alps, and The Squiggles.

Swordfishing can be done anywhere beyond the 100-fathom curve. If you’re on a two-day blue-water trip and spending the night offshore, but not in one of the previously mentioned areas, it’s still worthwhile to put at least one bait out for swordfish while you sleep. However, do so at your own risk. It seems that a hungry swordfish usually shows up when the crew is in the greatest need of sound sleep. Especially after a particularly tough and exhausting day of fishing. Boats have also had success trolling for swordfish at night using glow-in-the-dark lures. Mold Craft makes a glow-in-the-dark version of their legendary Wide Range lure that is perfect for this scenario.

“Swordfish behavior is heavily influenced by the moon as with all life on Earth.”

Swordfish behavior is heavily influenced by the moon as with all life on Earth. Although there is some debate, it is very hard to argue that the night of a full moon presents the greatest opportunity for swordfishing. It seems that regardless of the moon’s phase, a noticeable increase in swordfish feeding activity occurs during moonrise and moonset. These time periods usually lasts about an hour. It’s important to know what time the moon will be rising or setting. You must be prepared with fresh baits in the water at this time. Most GPS units give this information, but it’s a good idea to have an up-to-date moon/tide fishing calendar on the boat at all times.

Upon arriving at whichever location you choose to fish, there are a few things to look for while swordfishing that night. Rips are not only good to troll during the day. They are excellent spots to fish near at night for swords. Temperature breaks anywhere in the water column are also swordfish hot spots. Before setting up to fish, stop the boat long enough to determine which direction the boat will drift that evening. Position the boat accordingly so that the boat will drift over the best looking spots in that particular area.

Rigging for swordfish is fairly simple. They don’t seem to be wary of heavy leaders or tackle, such as large swivels or leads. A 12- to 16-foot-long mono leader between 300 to 400 pounds with a large circle hook snelled to the end is a very good setup for swords. Eagle Claw’s L2045G circle hook, between 15/0 and 17/0, works well for this application.

1. It is very difficult to set the hook with enough force required for setting a J-hook. This is because of the amount of mono—which stretches—between the rod tip and the hook.

2. The tissue in the mouth of a swordfish is extremely soft and delicate. Pulling the hooks can happen very easily. Odds are more favorable with a circle hook. Circle hooks are designed for fishermen to catch the corner of the swordfish’s mouth, unlike J-hooks. The hook usually pulls completely through the other side. This decreases the chance of pulling as quickly as a J-hook would. Although, the longer the fight wears on, the bigger the hole in the side of the fish’s mouth, which will eventually break all the way through.

Incorporating a glow stick or electric LED deep dropping light above the swivel will greatly improve the chances of the bait being noticed. Lindgren-Pittman makes electric deep dropping lights just for this application and offers them in multiple colors, as well as multicolored lights. The multicolored lights seem to be the most effective which are constantly changing colors as they communicate. A Promar LED strobe light is also an effective visual attractant.

The amount of lead to use depends upon how strong the current is on that particular night. However, 16 to 20 ounces is usually enough weight. Attach the weight at the swivel; a three-way swivel is highly recommended here. It’s important to rig the weight where it will drop off when a fish bites or swats the bait with its sword so that the fish can take some line, allowing it to swallow the bait before the angler pushes the drag to strike and set the hook. There are a few ways to rig the weights to drop off, and it will take some practice to perfect. One way to rig a drop weight is the use of a very light rubber band, or take rigging wire and make one to three loose twists that are just enough to hold the weight. But remember, everything weighs less under water.

Large, whole squid are arguably the best bait to use for swordfishing. However, a butterfly fileted hard tail—blue runner—works well, too. Most local tackle shops stock squid just for swordfishing. Baitmasters also sells whole squid. They offer them in several sizes and give the option of rigged or unrigged, with the rigged squid available with circle hooks or J-hooks. Fresh tuna, bonita or mackerel bellies are excellent swordfish baits, as well. Keep that in mind while fishing during the day.

Setting the lines can be tricky if not thought out beforehand and done correctly. Depending on the size of the boat, three to four lines set at different depths is the typical setup. The first line deployed into the water will be the deepest bait at around 350 to 400 feet down with the last line set the shallowest at 75 to 100 feet down. Some fishermen mark the line every 50 feet or so to be able to accurately set their lines. Others use the good ol’ “guesstimation” method. The most accurate way to set the lines is to use a line counter.

Lower lines slowly. The current must pull the bait away from the lead. If not, the leader will tangle up. Once the bait is at the desired depth, attach a balloon to the line with a rubber band or tie it around the line as you tie the end to seal the balloon after inflating. Then let the current take the balloon out away from the boat, doing so with each line and setting them about 25 to 30 feet apart. This will decrease the chance of lines crossing and/or tangling. Use bright-colored balloons because they are easily seen in the dark. You can also attach a glow stick to the outside of the balloon with electrical tape.

A Few Things To Keep In Mind

Once the fish is in the boat, it could potentially go ballistic, tearing up everything or anyone in its path.

Swordfish are notorious for being mean and can cause danger when at the boat, on the wire, or being gaffed. Be sure to have a flying gaff on board for larger fish. Almost every swordfish you encounter will require at least a second gaff to land. One person needs to grab the fish’s sword to control the fish. A thick pair of leather gloves is a necessity in this situation.

Once the fish is in the boat, it could potentially go ballistic, tearing up everything or anyone in its path. A good fish bat can help in this situation, but its best to stay back until the fish has calmed down. A hack saw is handy for removing the fish’s long sword so that it will fit in the fish box more easily. An insulated fish bag may be necessary to properly keep larger fish cool so it does not spoil. 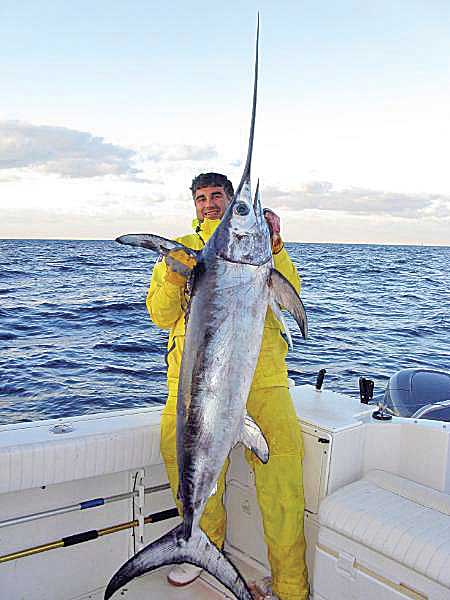 In the past 10 years, the number and size of swordfish have steadily increased. Photo by Angelo Depaola

Obviously, it is very important to swordfish stocks that the long-line ban continue to be in place. As recreational fishermen, it’s important to join and contribute to the organizations that tirelessly fight for recreational fishermen on many levels. Organizations like The Billfish Foundation and Coastal Conservation Association (CCA) have been vital to the recovery and sustainability of countless offshore and inshore species.

However, these organizations are dependent upon every recreational fisherman who cherishes a great/night of fishing. Hopefully, these efforts will allow children to be blessed with a lifetime full of the sweet smell of salt air, sunsets on a slick calm sea, and screaming drags. Add to that the excited whoops, hollers high-fives, and smiles of good friends as a big fish breaks the surface. Last but not least, the feeling that overwhelms you as you point the boat back toward home with aching muscles and a box full of fish.