Luck seems to follow those who are well prepared for turkey hunting.

Unless you are one of those “lucky” hunters who we always seem to hear about, successful turkey hunters earn just about every long beard they’re fortunate enough to take. Through all my experiences in the turkey woods, I have reached the conclusion that it’s just plain easier to be lucky than it is to be good.

Taking mature gobblers requires a turkey hunter to be three things. You must be extensive in oyur scouting, a skilled woodsman, and an efficient caller. Even if you master all of the above you must still have turkeys on the property you hunt. Having access to property with birds that receive light turkey hunting pressure is a bonus these days.

Once you decide on the area you plan on turkey hunting, it’s time to start doing a little homework. Most opening day gobblers that are killed are “already in the freezer” weeks before the season is even open.

Turkey hunting requires a lot of hard work, especially in the area of scouting. Don’t underestimate the importance of this.  Many guys think that by going out and listening- they’re scouting. This is a big mistake.

When scouting for turkeys pre-season, there are certain things I must know that will give me the confidence to hunt in the area. Where are the turkeys roosting? Are the gobblers roosting over water? If so, which side? Where are they traveling to? Are there hens nearby? Are they roosting with hens?

“Turkey hunting requires a lot of hard work, especially in the area of scouting. Don’t underestimate the importance of this.”

Finding turkey sign is almost as fun as lining up a bead on a big long beard’s neck. Look for scratchings along hardwood ridges and creek bottoms. Even in areas with extensive pine plantations, you will often find oaks along rows. Turkeys use creek bottoms as corridors to get to and from preferred feeding and roosting areas. The bigger the scratchings, the bigger the turkeys. Gobblers also love to scratch near the base of bigger trees as well.

Gobblers will also leave sign along sandy roads leading to and from fields and food plots. I like to look for gobbler tracks when it hasn’t rained in several days because it will give me a better indicator of what’s really there.

Last year, my 13-year-old son found a log landing at the intersection of several roads. It was just loaded with strut marks from a big tom. At mid-day, he took all of his equipment and created a natural blind alongside the clearing with the sun at his back. I was a little nervous, to be honest, but I knew he was capable of pulling it off. He had already taken sixteen turkeys; his first when he was just seven. My brother John and I had taught him how to be a woodsman and how to read turkey sign. When my son Harrison described the sign and the location he found, we knew it was the real deal.

Around four o’ clock that afternoon he called in his first turkey by himself. It was a twenty-pound long beard sporting a 10 ¼ inch beard and 1 ¼ inch spurs! The old tom gobbled at first in a nearby bottom but the soft yelps on a slate were just too much for the old tom to take, and he strutted and drummed the entire way to the clearing.

That turkey was taken because of my son’s ability to find fresh gobbler sign in an area that the gobblers were using to attract hens. What a deadly combination. 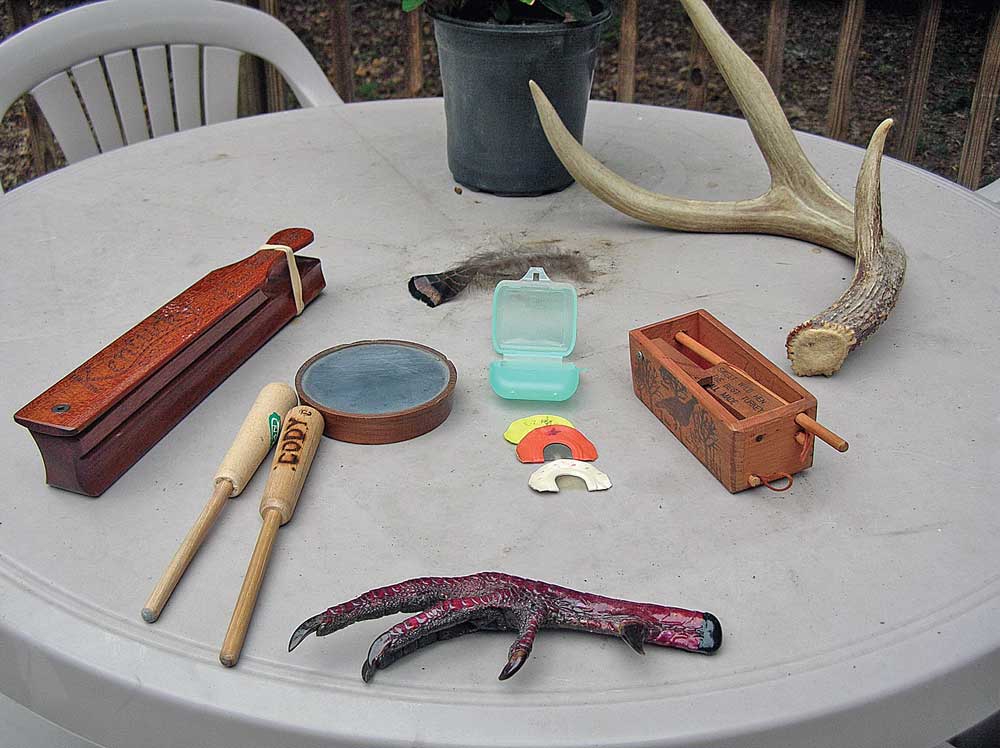 Have all tools cleaning, prepared, and ready before the season opens. Photo by Scott Jordan

A true turkey hunter can hunt a particular turkey, even for multiple days in a row, without that turkey ever knowing he was being hunted. For me, being a good woodsman is simply learning how to get close to the game I am after without spooking it. One of the most important aspects of turkey hunting is getting between where the turkeys are and where they want to be. This sounds simple, but in reality, it’s a nightmare for those hunters not familiar with the details of the land and without an understanding of the travel routes of their turkeys.

“You should be so familiar with the land and the turkeys on it that if you had to, you should be able to take a tom without calling.”

You should be so familiar with the land and the turkeys on it. So much so that, if you had to, you should be able to take a tom without calling.  Never call to and condition preseason gobblers. Locator calls are fine, but too much can also turn turkeys off. I like to let the woods wake up and let nature take its course when scouting.

When traveling to and from areas where you think there might be turkeys, take the least intrusive routes. Go out of your way to not spook the turkeys you will be hunting. If you need to scout areas like fields or log landings, do so in the middle of the day.

This aspect of turkey hunting is the easiest because you don’t have to be a great caller in order to bag turkeys. Practicing the different sounds that turkeys make and knowing how and when to use each call is critical to calling success. Once you have mastered the art of calling, be sure to have at least one type of slate call, a box call, and several mouth calls packed in your turkey vest on opening day. Be able to produce realistic sounds with proper rhythm and tone. Have plenty of sanding tools and strikers in case you lose one in the woods.

Make no mistake, good calling makes all the difference. Guys that can’t call well are not as successful as those that can. It’s that simple.

Someone asked World Turkey Calling Champion, Preston Pittman, about all the fancy calling that contest callers always do and how that wasn’t necessary to kill a turkey. Pittman stared at the guy and stated, “No, you don’t have to be a great caller, but trust me, you don’t want these guys hunting your turkeys!”  He winked and then walked off.

There are differences in how gobblers respond to a hunter’s calls in different parts of the country. In Alabama, turkeys will become conditioned to over-calling and poor calling. These older turkeys become almost impossible to call in unless you are dialed into what real hens sound like.

One of the best ways to learn about how to sound like a turkey is to purchase tapes and listen to how the experts sound.  There are also tapes of real hens on the market as well.  I learned how to take my calling to the next level by going to local, regional, and national calling contests where the best callers are on stage. Take a tape recorder so that you can practice on your own what you are hearing. For listings for calling contests in your area, go to the National Wild Turkey Federation’s website. 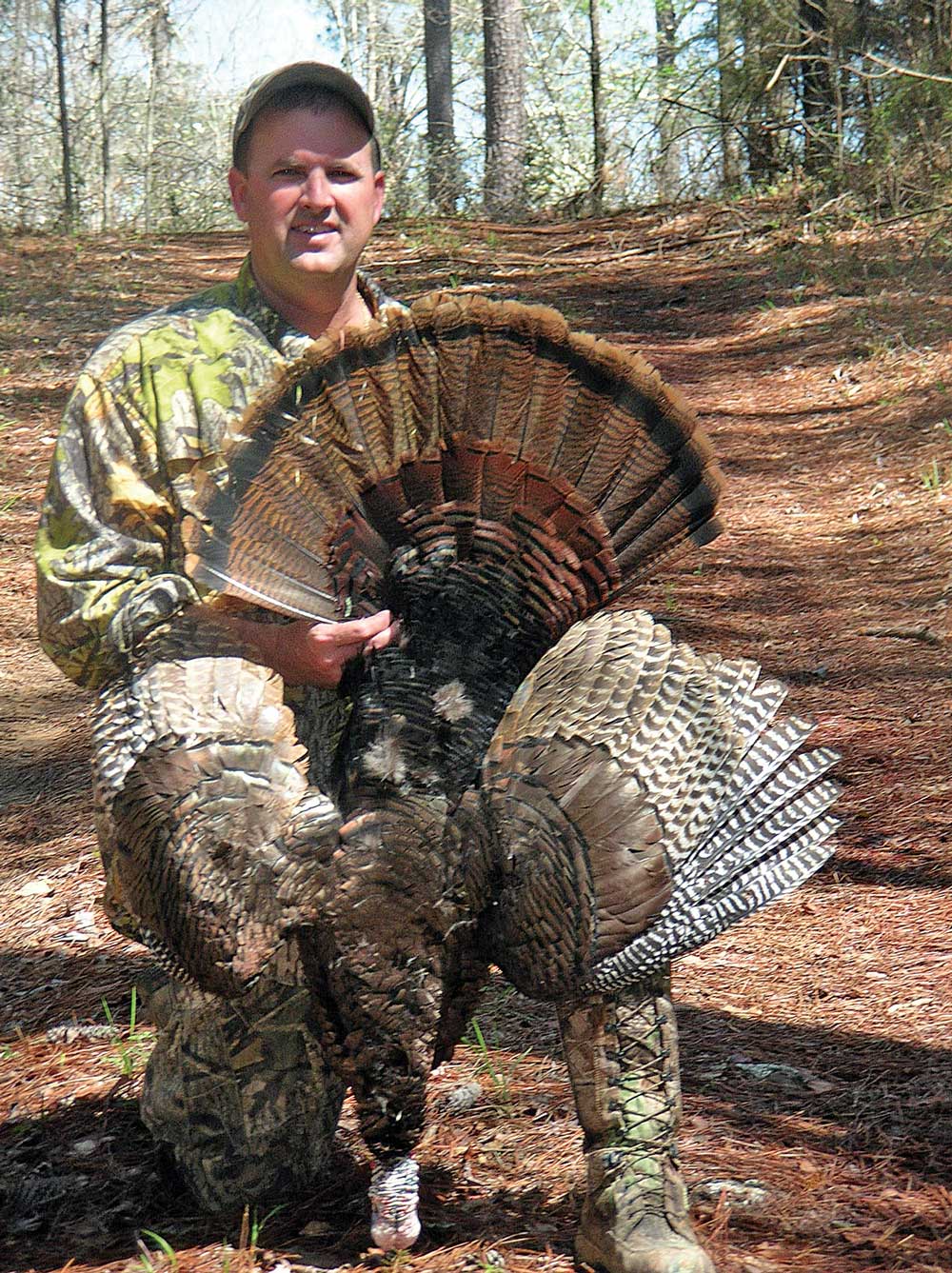 Learning the turkeys’ habits where you hunt will put you where the turkeys are… and where they want to go. Photo by Scott Jordan

Putting it all Together

Turkey hunting success begins weeks before the first hint of daylight shines down on opening day. I’ve always been a fan of hard work and preparation in every aspect of life, and this certainly applies to turkey hunting. The guys who rely on a little luck to make it happen are just plain lucky, or they’re just in a place with a lot of turkeys.

Being lucky has nothing to do with that!