What is upwelling? What is downwelling? What is satellite radar altimetry? What are satellite altimetry charts? How can all these things help anglers find fish? One of the first things that anglers who decide to get into the offshore fishing game discover is that this sort of fishing is not cheap.  The boats are expensive, the gear is expensive and the fuel is expensive. However, the most expensive element of offshore big game fishing is simple: it’s time.  Anglers who take the trouble to go offshore need to do everything possible to maximize their productive fishing time and eliminate the dead time of just driving and looking for fish. This is where satellite radar altimetry and satellite altimetry charts come in.  Let’s face it, there’s a lot of water out there, and most of it looks an awful lot alike.

Up to fairly recently, offshore big game fishing involved a great deal of looking and riding time and much less actual fishing and catching time. But with the advent of certain advanced technologies and tools, offshore anglers can spend much less time and money on unproductive riding and more time on catching the pelagics they are after. 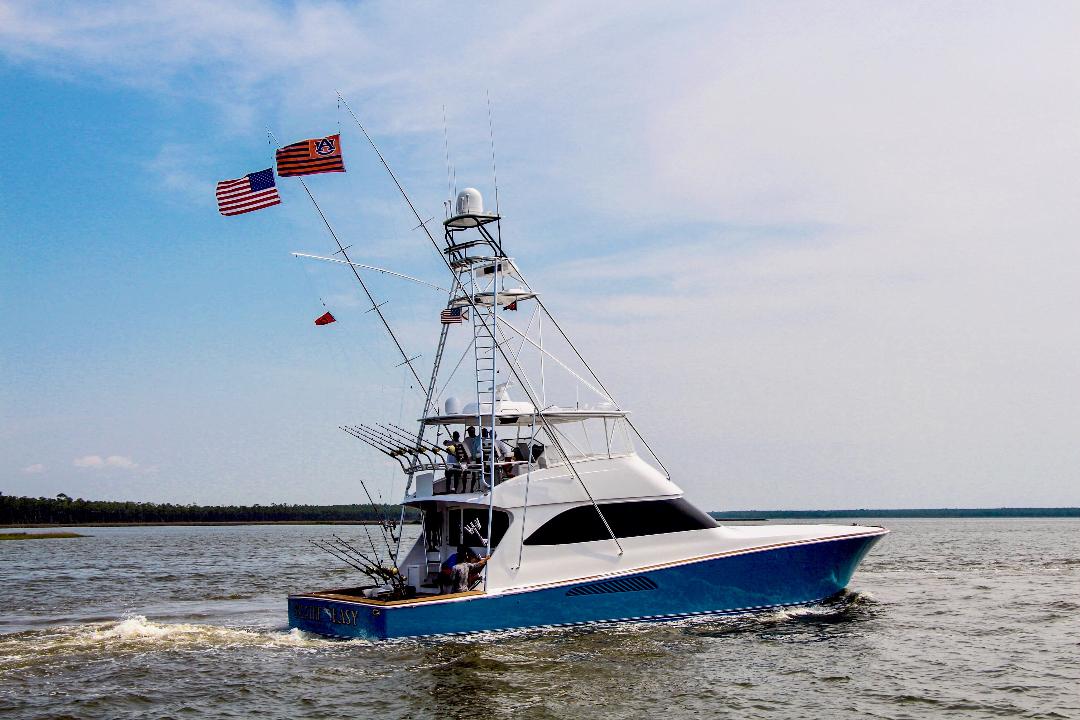 We went to the source, Thomas Hilton who is head of Hilton’s Fishing Charts, LLC., and asked him to respond to our questions about the satellite technology and services offshore anglers can use to make their fishing more successful.

GDO:  What is satellite radar altimetry?  What is upwelling?  Why does this provide important offshore fishing information? What sort of information does this service provide? How do you receive and produce this information?

Hilton:  “Satellite radar altimetry is the measurement of the ocean’s surface height using instruments shooting radar from satellites which create a contour chart of the ocean surface every day.  The measurements are very subtle, as each isobar represents about 2-inches while each horizontal line of latitude represents 60 nautical miles – measurements of only a few inches in height differential spanning over sometimes hundreds of miles.   The significance of this imagery is that it shows areas associated with downwelling and upwelling currents. What is upwelling? Upwellings are the depressions (isobar measurements below mean sea level) that indicate nutrient-rich areas while the bulges (isobar measurements above mean sea level) indicate downwelling, nutrient-poor areas. The pelagics follow the food supply, and since downwelling currents push everything down, including nutrients, there is not much food to be had in these areas.   Upwelling currents bring nutrients from the deep up to the surface where they interact with sunlight, creating the beginning of the food chain.

Now, there is a caveat to altimetry; the big assumption here is the bait is swimming with the free-flowing currents, but with the introduction of the deep water oil structures such as spars, drill ships, and semi-submersibles, the bait is no longer flowing with the currents but instead staying within the refuge provided by these deep water oil structures.  So, over the years we have gotten reports from subscribers detailing how they caught lots of tuna (and marlin) near rigs in really bad altimetry, if the bait is not leaving, the predators are not leaving and it really doesn’t matter what the altimetry is showing.  So, if you are open water rip fishing, you had better take heed to what the satellite altimetry chart is showing, but if you are rig fishing, you can pretty much ignore it.”

Hilton:  “Each imagery in Hilton’s (sea temps, chlorophyll, altimetry, and currents) has favorable and unfavorable areas and by finding areas that have the most overlapping favorable conditions you narrow down your target areas for the best chances of success.  We also provide tools to help refine the data; tweak the sea temp shots to pop out where the weed lines are located, the Trip Planner tool allows you to create routes along dynamic structures such as temp breaks, color changes, etc. so that you can compare that route to all of the other imageries, OR to its own history. 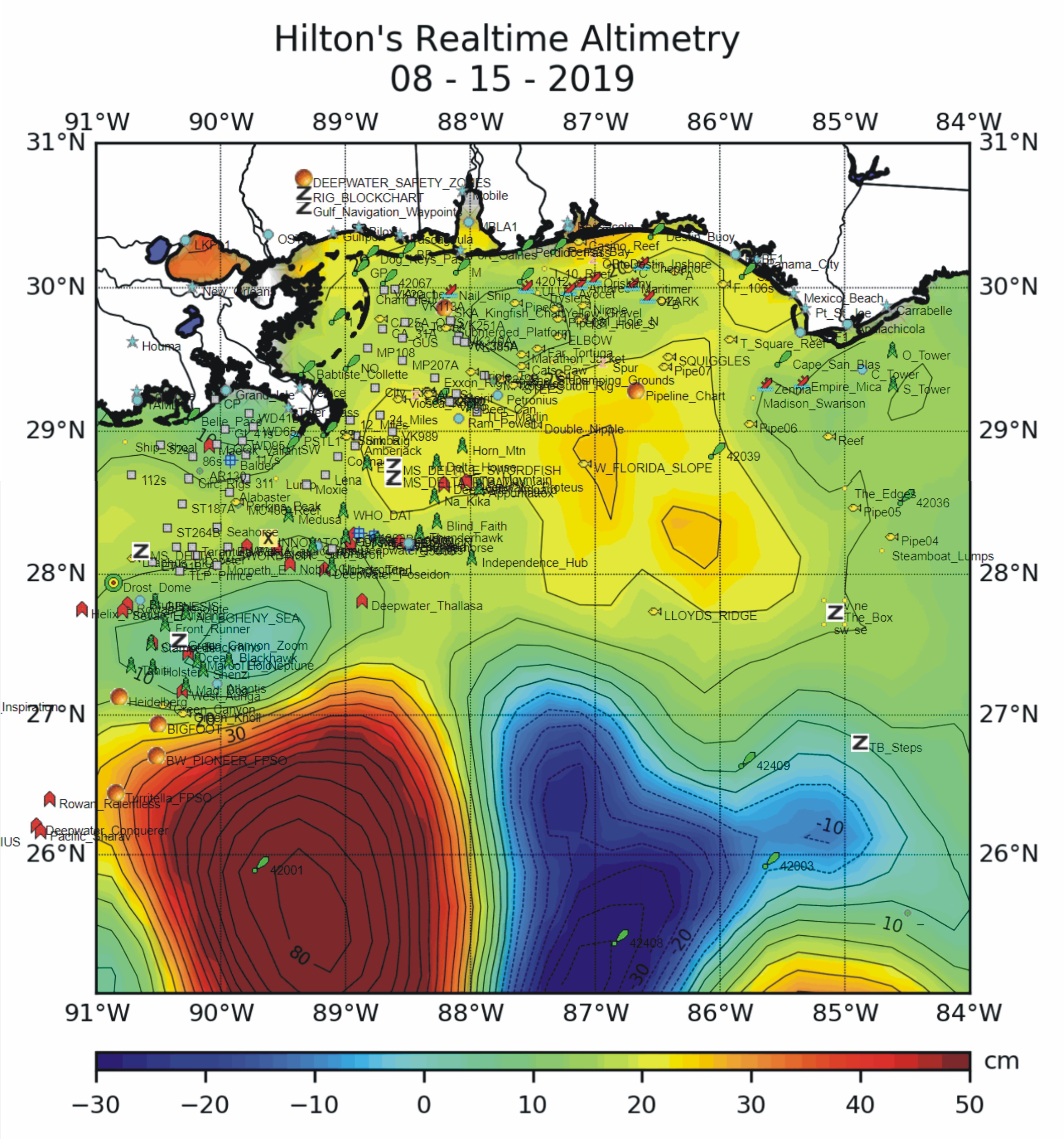 The areas in Blue indicate upwellings (depressions) while the areas in red indicate downwelling (bulges).

Let’s say you created a route on the latest SST shot of a well-defined temp break, you can compare this route to SST shots that are 2, 4, 8 hours older to determine which way it is drifting and how fast so that you can interpolate how to intercept it when your boat is actually out on the water.  And, because you have so many more generations of SST shots, you can track those breaks associated with color changes and track them accordingly.”

GDO:  Please describe your Real Time Navigator and how it can help offshore anglers.

Hilton:  “We launched the website 15-1/2 years ago which allows satellite radar altimetry chart images to download to our servers in a geo-referenced format with known waypoints overlaid and gives our subscribers the ability to access this data anytime and as often as they like.   We give you the tools to analyze these shots, save them as historical logs as well as to tell the system which satellite altimetry charts you want to download to our RT-NAV navigation app.   You can monitor the conditions from your home, office, or boat in the days preceding your fishing trip and can download the satellite altimetry charts into your smart device to navigate upon outside of cell range using our nav app.

Once you have downloaded the shots into the app and are in navigation mode, your smart device becomes a satellite-based GPS chartplotter, just like the chartplotter on your helm except you are navigating on the dynamic Hilton’s imageries.  You can create instantaneous routes to waypoints by just clicking on the name, or route to temp breaks and/or color changes.   The Nav Bar in the upper left corner of the nav app screen shows your current lat/lon position as well as the distance/bearing to whatever you may be navigating to.  Currently, we have 36 regions which cover the Gulf of Mexico, East Coast, West Coast, Central America and northern coast of South America, Bermuda, Bahamas, Windward Islands, Puerto Rico, Virgin Islands, Dominican Republic, etc.”

GDO:  How can your service help anglers catch more big fish and also save money while doing it?

Hilton:  “Hilton’s has helped countless anglers over the years catch tournament-winning fish by giving them the tools to know where to go before you leave the dock.   Additionally, you can push the time frame to download the absolute latest satellite radar altimetry charts right before you leave the dock so that you are navigating on images that are just a few hours old, or for those boats equipped with satellite communication packages, you can download whenever you wish while offshore outside of cell range. Since you know where you are going before you leave the dock, you will save hundreds of dollars in fuel costs by increasing your efficiencies fishing productive waters instead of wasting fuel aimlessly wandering/looking.” 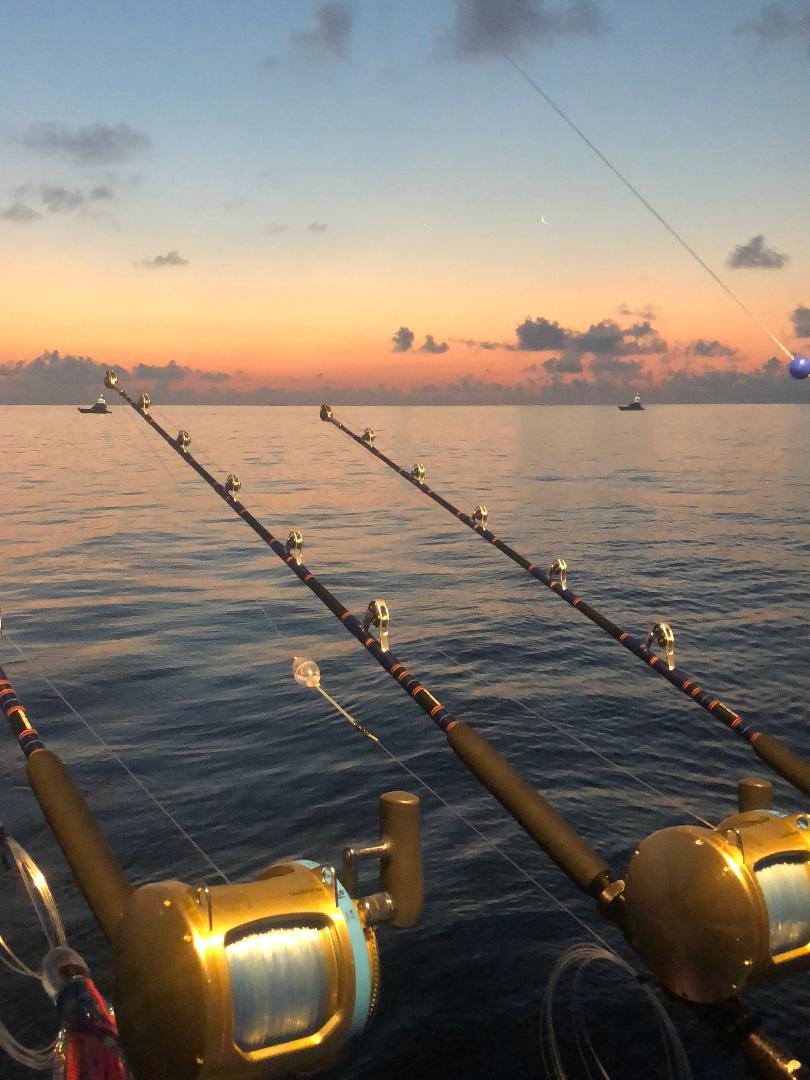 Anything else you’d like our readers to know about your products?

Hilton:  “Hilton’s has led the fish forecasting industry for many years now, but we cannot sit back on our laurels, we pride ourselves not only in staying on the forefront of technological advances, but answering the phone or emails when subscribers have questions/issues using the service or nav app.   This year for instance, we added; 1) a new sea temp adjustment bar which streamlines the process of customizing the SST charts, 2) the ability to determine major/minor feeding times at any point on the earth, 3) we introduced “H.E.L.P.”, Hilton’s Electronic Logbook Program, which allows you to look back in time at selected tournaments or reverse-engineering your private fishing trips.   We believe that H.E.L.P. will be a great learning tool by looking at areas where fish were caught in the past, determining trends, then looking at today’s satellite altimetry charts right before you go fishing to look for similar trends. We are currently working on other improvements scheduled to come out at the Miami Boat Show in February.”

Captain Patrick Ivie has fished offshore from Orange Beach, Alabama for a long time, and he is a believer in the Hilton’s System. 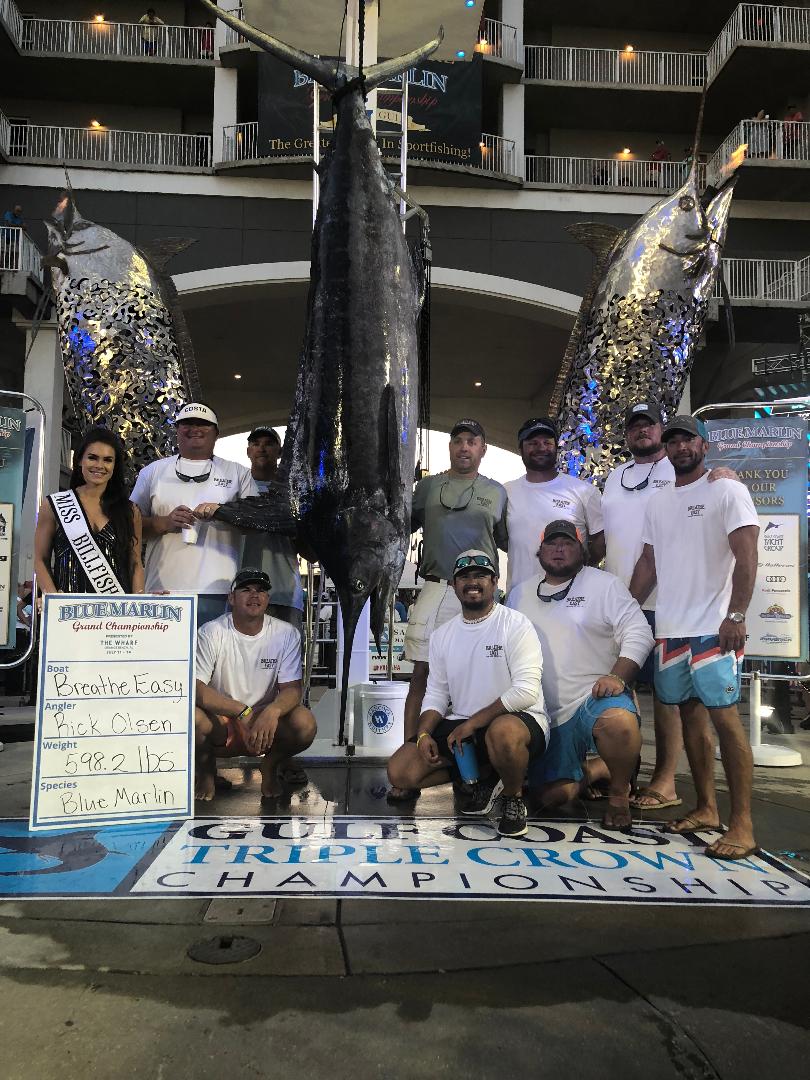 Hilton’s puts Captain Ivey and his anglers on winning fish.

“I have been using Hilton’s for around ten years or so. At first we also used a couple of other on-line sites as well, but Hilton’s is now the only site I use.  Hilton’s gives the offshore angler the ability to look at real-time live data at any point throughout the day or night assuming you have internet or WiFi, which most big sport fishing boats do,” Ivie said.  “We are constantly looking for any edge over our competitions where is hundreds of thousands, if not millions, of dollars on the line.”

“How often I access the Hilton’s System depends on a lot of things.  But I would say I access it three to five times a day at minimum. I’ll take pictures of what I like to see on Hilton’s and throughout the trip, I’ll pull up those photos and look at them to make sure I’m seeing what I want to see,” Ivey pointed out. 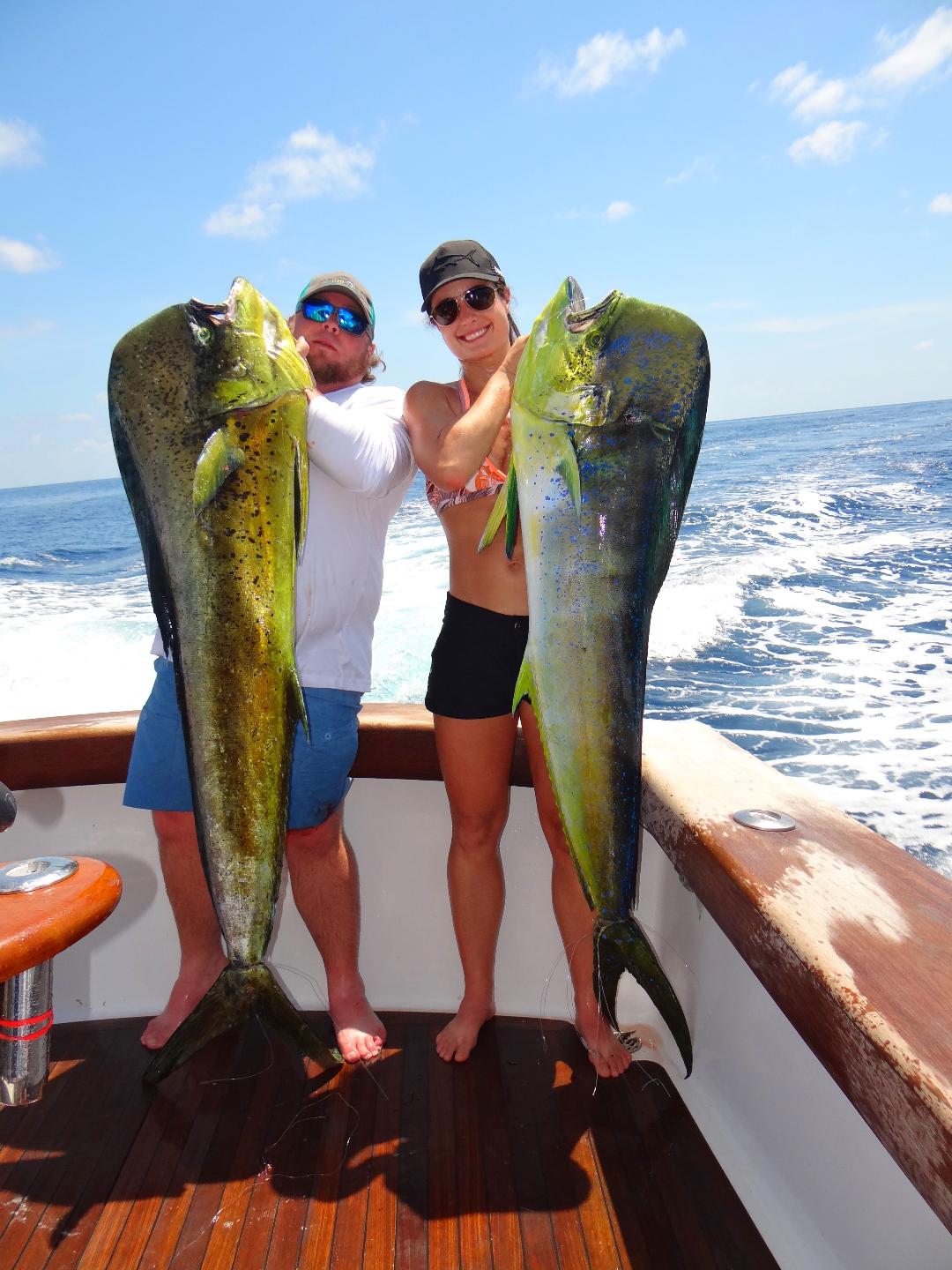 Not all big offshore fish found with Hilton’s system are pointed on the end.

According to Ivey, not only does Hilton’s provide him with the data and info he needs to get the job done but the customer support is top-notch.

“Hilton’s has been instrumental in helping me put us on fish and is a major role in where we go.  We never leave the dock to go fun fishing or tournament fishing without looking at Hilton’s satellite altimetry charts. “During our peak tournament season, we are on Hilton’s every single day looking at what the water is doing,” Ivey stated.  “Tom Hilton will go above and beyond to help you with his service. I’ve called Tom in the middle of the night and asked what it looks like out here when we lost internet service. He’ll answer the phone every time. Tom is also an avid fisherman and knows what to look for. He’s definitely not a desk jockey trying to make a quick dollar. Hilton’s is the only service I use now for my offshore fishing, and you’ll not find better customer service anywhere.”