When crappie fishing in Alabama, anglers generally know the top destinations. From north to south, the state is littered with well-known crappie venues that produce consistently. Whether analyzed from a traditional perspective or from current trends, fisheries like Eufaula, Martin, Weiss, and Pickwick rank favorably with any crappie lakes in the country, and even out-of-the-way stops like Millers Ferry draw legions of anglers each year. Those renowned lakes certainly deserve their reputations, but Alabama crappie fishing is not confined to just the top destinations. Plenty of other places, like Bear Creek Alabama and Lake Wedowee, exist within state boundaries with eager populations of slabs waiting to be caught. In fact, a survey of top crappie fishermen and fisheries biologists across Alabama yielded a litany of responses. The state doesn’t lack for crappie fishing sites, regardless of whether they are on the national radar or not.

“Overlooked” is just one word to describe these crappie waters; “unknown” or “unexploited” or “underutilized” are other terms that characterize the fishing in some of these places. Following are just a few of those locations. 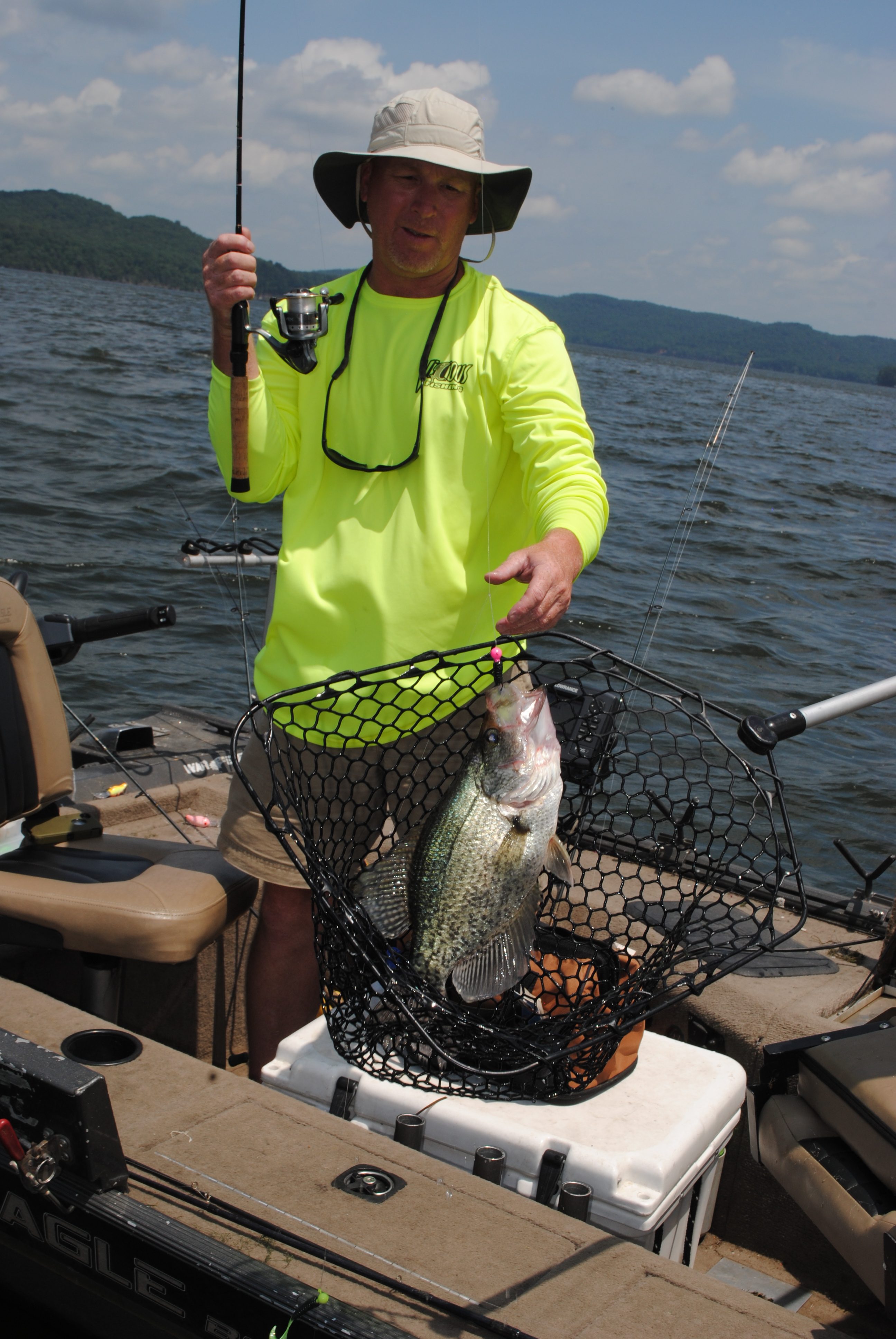 For a change of pace and great crappie fishing in Alabama, seek out overlooked, unknown, unexploited, or underutilized hotspots.

Claiborne can be very good

Claiborne, the last impoundment on the Alabama River, is one fishery that surfaces immediately in the discussion of overlooked crappie hotspots. Both Dave Armstrong, District V Fisheries Supervisor for the Wildlife and Freshwater Fisheries (WFF) division of the Department of Conservation and Natural Resources (DCNR), and guide Gerald Overstreet recommend Claiborne as a likely option for crappie fishing in south-central Alabama.

Overstreet normally crappie fishes on Millers Ferry, but if he’s looking for a change in scenery, Claiborne offers plenty of possibilities. 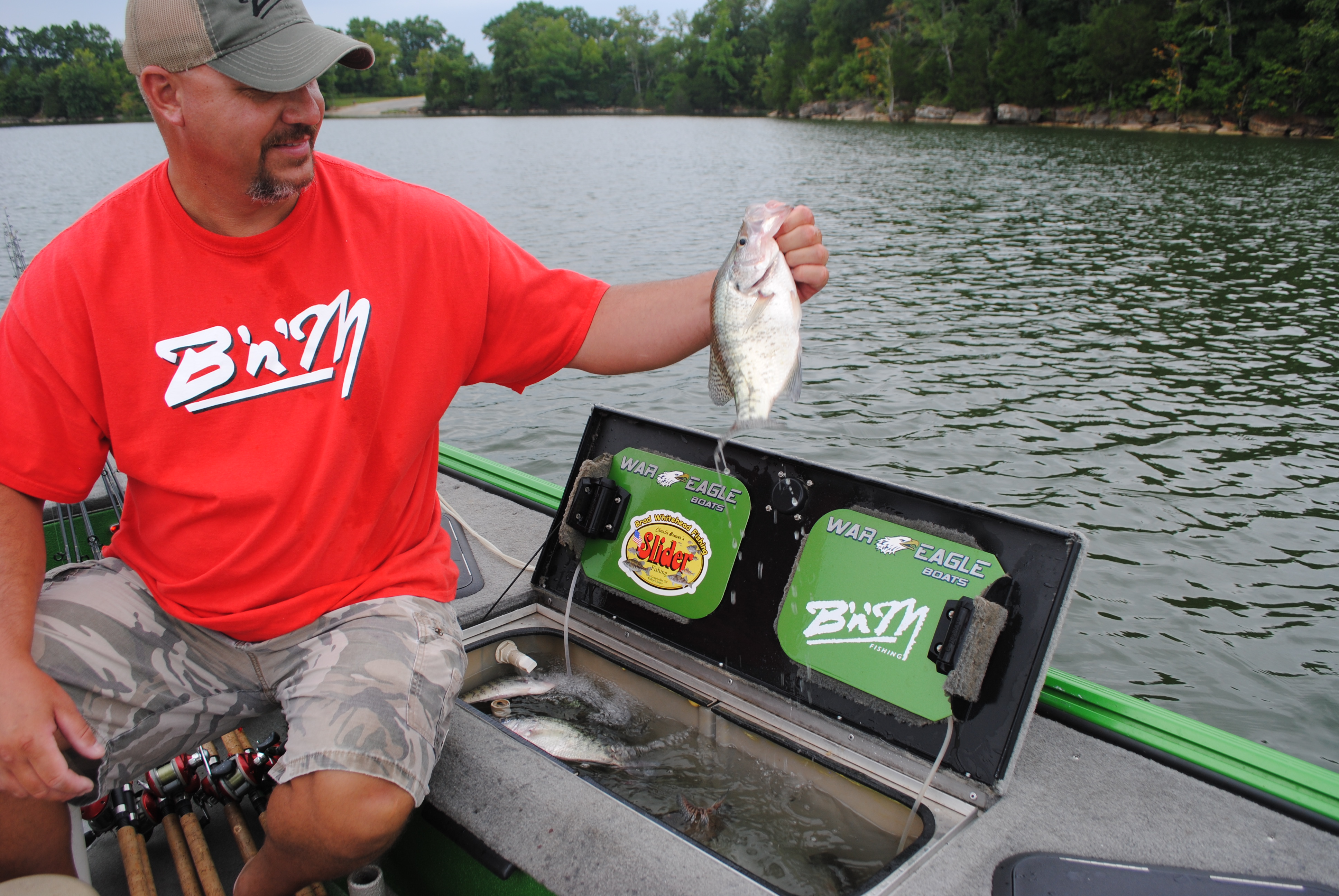 If you are willing to put in the effort to get to places other are less like to go, you can load up on crappie for unexploited waters.

Located immediately below Millers Ferry Lock and Dam, Claiborne winds a twisted path from near Camden for 60 miles downstream. Although it covers less than 6,000 acres, various tributaries provide good crappie fishing, mainly on the lower end of the otherwise skinny reservoir. Good crappie fishing can also be found on the main river run as well.

Armstrong mentioned the fishing in Silver Creek, Maiben Lake, Camp Creek, Cane Creek, Tallatchee Creek, and McCalls Ferry. A good launch on the lower end is at Isaac Creek near the dam. On the upper end, which has fewer public access points, Armstrong recommends launching at Holley’s Ferry or Clifton Ferry.

“Given that boat access ramps are somewhat off the beaten path and with not a lot of access in the upper reservoir, we consider it only moderately exploited,” Armstrong said. “Fish populations here are very stable with lower mortality, and we see older fish because of that.”

Overstreet Guide Service is known for fishing wood structure in current all along the Alabama River, and he finds that situation regularly on Claiborne. He mainly slow-trolls into the current or makes vertical presentations into structure.

Another possibility for crappie fishing in Alabama is Lake Demopolis in the western part of the state. Jay Haffner, District III Fisheries Supervisor, oversees management of lakes in west-central Alabama and suggests that Demopolis is good crappie water although it doesn’t get that much attention outside the local area.

Overstreet makes a few trips to Demopolis each year and says the fishing on the Tombigbee reservoir is different from other Alabama crappie waters. Old-school casting to stumps, brush piles, and shallow grass still catches plenty of crappie there.

Anglers, both locals, and visitors from outside the state, annually flock to Weiss Lake, the uppermost Coosa impoundment in northeast Alabama, and the pressure and crowded conditions in late winter, spring, and fall are definitely factors to be considered when planning a trip.

Most anglers usually just join in the crowd, but Mike Holley, District II Fisheries Supervisor, points out an alternative not far away on the Tallapoosa chain, one that is generally less crowded than such a popular destination as Weiss.

“Harris Reservoir, ‘Lake Wedowee,’ is probably the most overlooked crappie lake in District II,” Holley said. “Due to the deep water that is characteristic of Harris, crappie tend to be harder to locate and catch, but those (fishermen) that figure out how to catch them catch some really nice crappie, particularly on the lower end of Lake  Wedowee, around Highway 48 and south to the dam.

“We have seen excellent size structure at Harris during our standardized sampling for crappie over the last several years, with good numbers of crappie around 12-14 inches.”

Located near the town of Wedowee south of Interstate 20 in extreme east Alabama, the lake is unique in that the crappie are so unexploited that many tend to die of old age. Holley noted that Alabama crappie generally live a maximum of about eight years.

Because of the deep water on Lake Wedowee, spider rigging appears to be the preferred method of targeting fish although one-pole, vertical jigging around structure up to about 25 feet deep will also produce.

While Lake Wedowee is one alternative in the region. Weiss Lake guide Darrell Baker (Weiss Lake Crappie Guides, (256) 557-0129) offers a couple other possibilities, Guntersville on the Tennessee River and Logan Martin on the Coosa.

Guntersville is an ironic choice for crappie fishing in Alabama, considering its own crowded conditions, but the pressure comes mainly from bass fishermen. While the crappie fishing is well-known to locals, it’s generally off the radar of fishermen from outside the region. Much the same is true of Logan Martin, located near Pell City, as well.

“Just like Lake Wedowee, both have really big crappie and everybody looks at those two lakes as a bass lake,” Baker said.

Crappie fishermen in Alabama have plenty of options the northwest, and the Bear Creek Development Authority (BCDA) lakes are technically a part of the overall Tennessee River system. However, because they are several miles removed from the main river, the lakes of Bear Creek Alabama – Cedar, Upper Bear, Little Bear, and Big Bear – are usually considered separate fisheries.

Three of the small lakes fall entirely within Franklin County boundaries with Upper Bear spilling into Marion and Winston counties as well. Cedar is the largest at 4,500 acres and holds great numbers of keeper-sized fish. Little Bear, at just over 1,500 acres, is known for producing a better quality crappie.

“I have taken so many guys that didn’t know Little Bear existed,” Muscle Shoals guide Brad Whitehead said. “They have heard of Cedar but not Little Bear.”

Crappie fishing on Big Bear is great to do with friends; there are plenty of fish and no size limit.

The Bear Creek Alabama lakes are easily fished and provide a good fallback plan if wind produces rough conditions on the Tennessee River. The pristine waters of the lakes also produce some of the best-eating fish around for Whitehead (Brad Whitehead Fishing, (256) 483-0834) and his clients.

“One of the reasons that many people call me is to fill their freezer with crappie filets,” Whitehead said. “They want crappie to eat, and there are plenty of fish to be caught on the Bear Creek Alabama lakes.”

“Bear Creek, aka Big Bear,” Ekema when quizzed about which lake is most overlooked in his supervising area. “Good numbers, no size limit.”

The designation of Big Bear is something of a misnomer. It is the smallest of the BCDA impoundments at only 600 acres. It is navigable, however, and produces good fish in a picturesque setting with limited pressure except for a few locals who live close to the lake.

Lewis Smith Lake, between Jasper and Cullman, contrasts with the Bear Creek Alabama impoundments in several ways. First of all, Smith is hard to miss, a much bigger impoundment featuring three huge arms that sprawl in a variety of directions. It is also a well-known fishery, just not for crappie.

Known as a spotted bass and striper lake, Smith is just beginning to ease into the consciousness of the crappie-fishing community. A very few tight-lipped locals have been catching crappie there for years. Only recently have reports begun to filter out about the good crappie fishing on Smith. 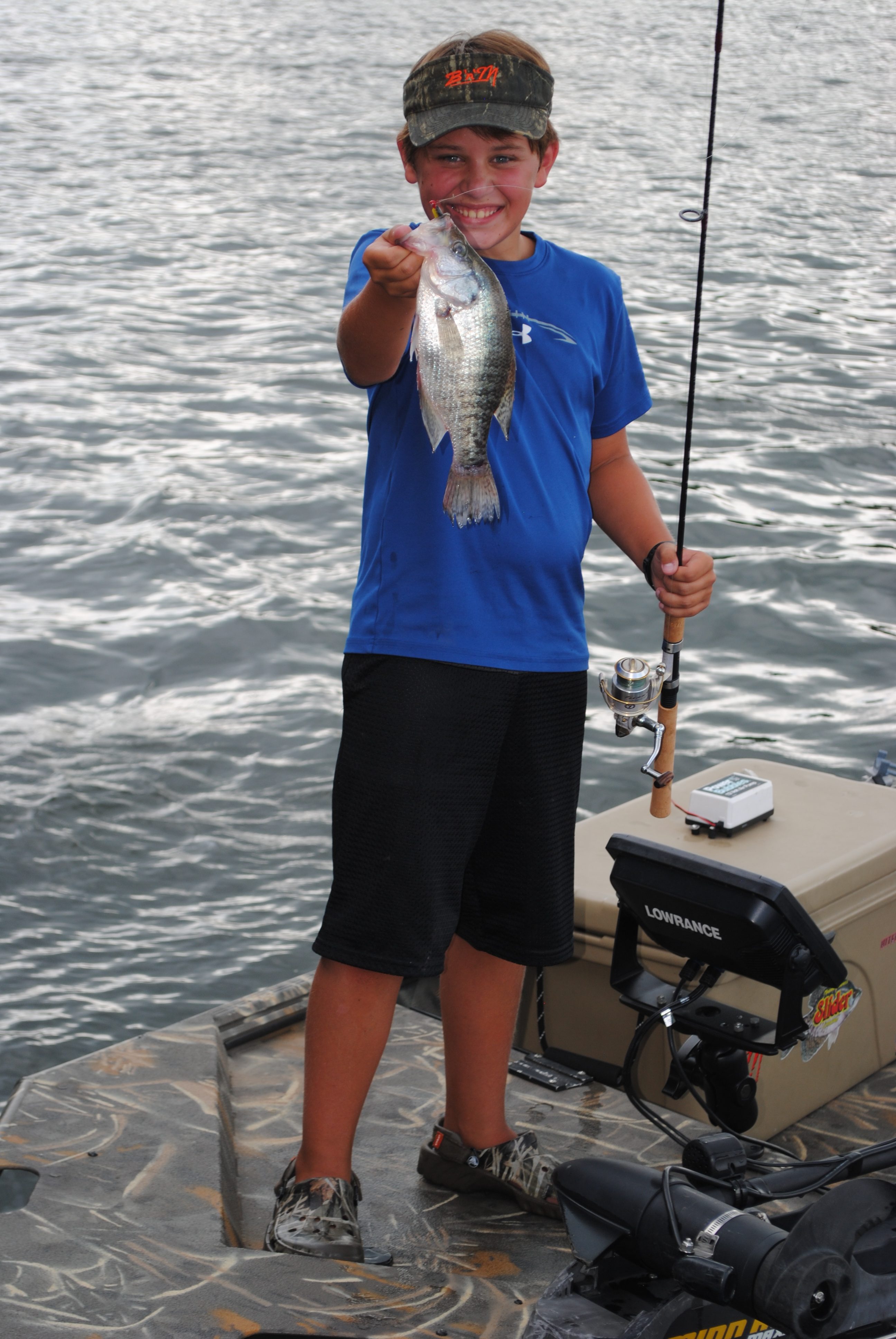 For Haffner, the news proved to be something of a surprise because he has been sampling fish populations on Smith for over 20 years. Only in the last 10 years or so have crappie begun to show up in significant numbers in those seine and shocking surveys.

“Yes, it definitely remains one of our most overlooked lakes for crappie fishing in Alabama,” Haffner said.

Depth is the main problem facing crappie fishermen on Smith, where water can easily be over 100 feet deep even close to the bank. Modern electronics have unlocked some of the crappie fishing on Smith, however.

The crappie there are no different there than on other lakes; they like to hold in and around wood structure. While some crappie do suspend in the vast open-water areas on Smith, identifying brush piles and stumps on a quality electronics set-up is a good way to target the fish.

Fishermen generally take a vertical approach because of the water depths with double-minnow rigs being a go-to approach. Other anglers vertically fish small spoons or traditional crappie jigs around the wood.

Eufaula is a factory for crappie fishing in Alabama, in the southeast portion of the state. The big reservoir on the Chattahoochee River attracts anglers from around the region, including many from Georgia and Florida. However, District IV Fisheries Supervisor Ken Weathers said other good possibilities exist.

“Winter-time drift fishing near the dam at Lake Frank Jackson is very popular and productive,” he said. “Gantt Lake near Andalusia has a healthy population of both black and white crappie.

Neither of these sites pump out the crappie like Eufaula, but local anglers love them, especially February through mid-April.”

Lake Frank Jackson is located at Opp and surrounds the state park of the same name. Crappie fishermen find fish suspended in 10-15 feet of water near the dam and target them with minnow rigs or jigs tipped with minnows.

Gantt is not far away. The 2,700-acre impoundment on the Conecuh River features a combination of deeper water surrounded by flats. The crappie feed on the edge of the flats most of the year and can be targeted with trolling methods, long-lining early in the year when they move shallow and spider rigging later when they move slightly deeper.

Haffner mentions a final location in his district that provides excellent crappie fishing with minimal pressure. The idea generally applies across much of the state: Target crappie at a state public fishing lake (PFL).

The Fisheries section of the WFF manages 23 of the lakes across the state. While not all of the state lakes boast crappie populations, Haffner notes that Dallas County Public Lake south of Selma is one that does.

“It’s another one of those overlooked crappie spots in my district,” Haffner said. 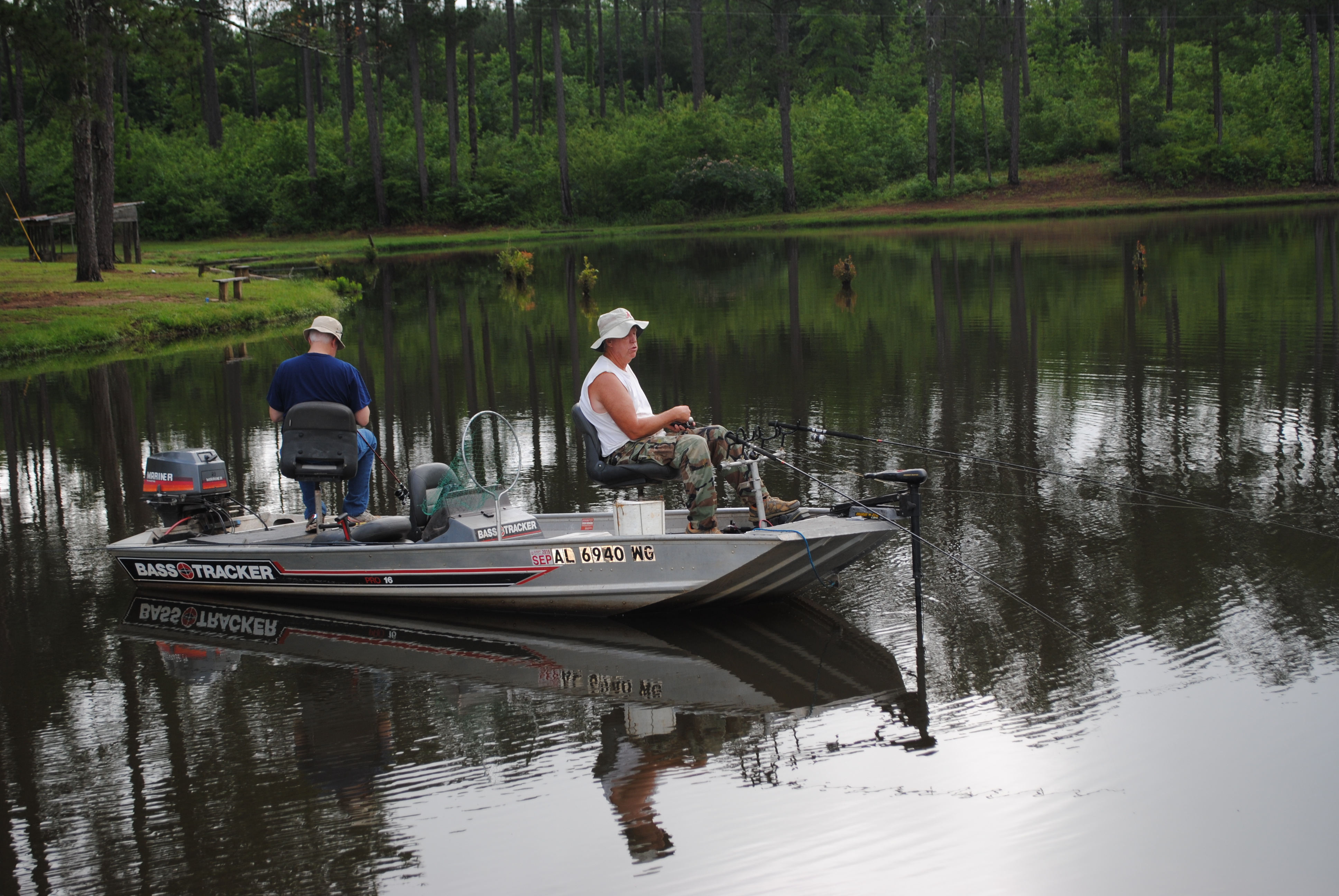 Weathers points out Lee County Public Fishing Lake south of Auburn. The 130-acre lake, one of the largest in the system, has produced over 9,000 crappie in the last year.

“In general, the state public lakes are not heavily pressured,” Ekema said. “They are a good fishing resource and are usually fairly easily fished from the bank or from a boat.”

Wether you try out Lake Wedowee, Bear Creek Alabama or one of the other lesser known venues, crappie fishing in Alabama generally rates good to excellent just about every year. While much of the crappie fishing in the state takes place at traditional destinations, consider a trip to one of these alternative sites. Just like the better-known fisheries, the crappie bite in these fisheries every day of the year as well. 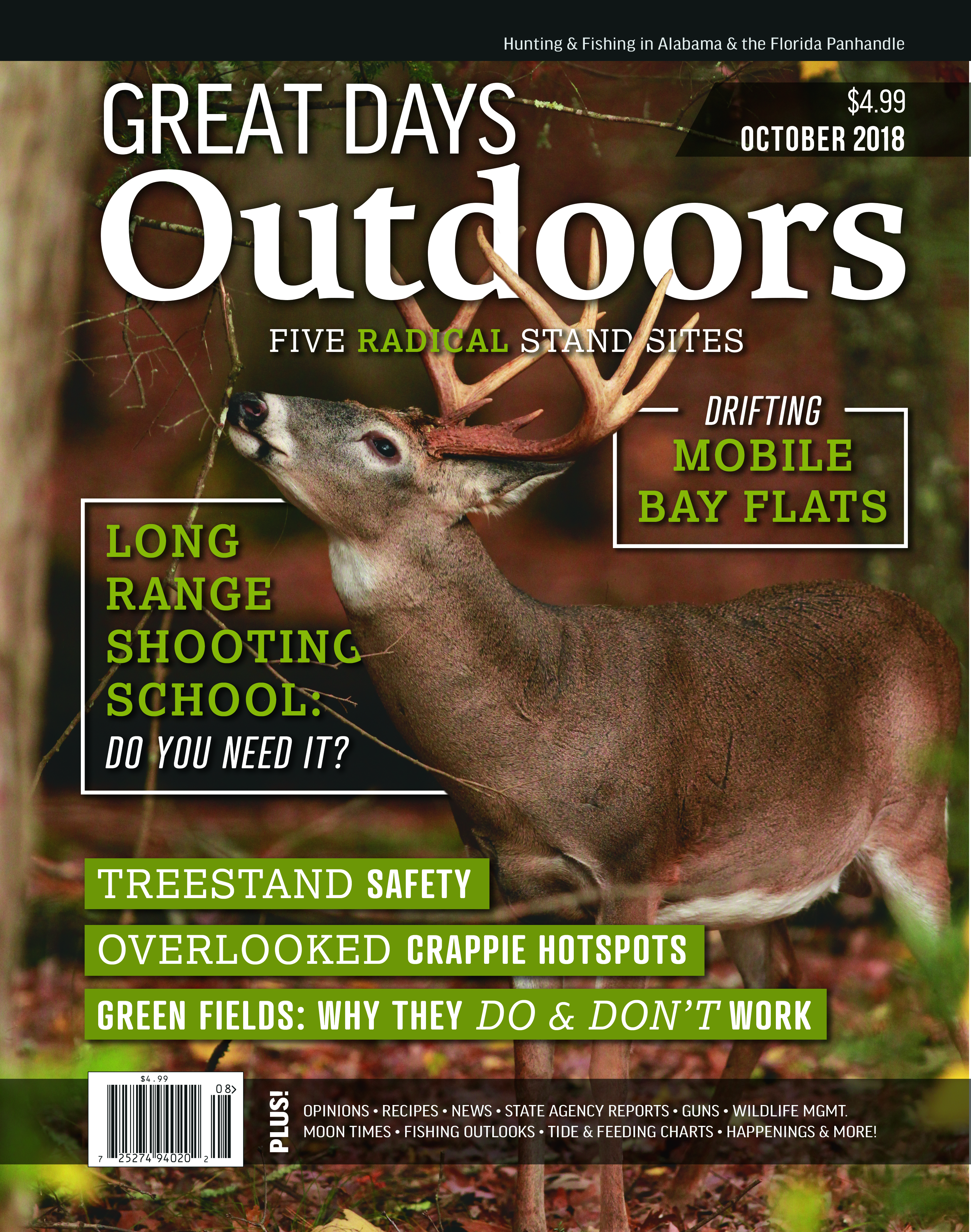 This article first appeared in the October 2018 print issue of Great Days Outdoors Magazine. For more great hunting and fishing content for the deep South, subscribe to Great Days Outdoors print and digital editions or click the image to download this issue.