What can be done about our declining turkey population?

For close to fifty years, Alabama has been famous for its great turkey hunting. This reputation is well earned and well deserved. Famous turkey hunters of yesteryear like Ben Rogers Lee and Billy McCoy helped push this narrative and today personalities like Eddie Salter and Mr. Tom Kelly keep Alabama at the forefront of turkey talk all over the country.

The early season and liberal bag limits, along with an estimated population near the top of all states bring hundreds if not several thousand hunters to our neck of the woods each spring. Many of these hunters find themselves at one of the dozens of commercial hunting lodges where they experience excellent hunting in some of the best turkey habitats the South has to offer. To many hunters, this is what Alabama turkey hunting is all about.

These days, many local hunters are beginning to experience a very different kind of Alabama turkey hunting. Ten years ago, an Alabama turkey hunter didn’t need access to some high dollar property to experience consistently good hunting.  All over the southern third of Alabama as well as certain other parts of the state, hunters found good populations of turkeys just about anywhere that good habitat existed. Sadly, these days this is not always the case.

Alabama, as well as other Southeastern states, is experiencing a noticeable decline in turkey numbers. This decline is actually quite dramatic in some areas, including certain counties in South Alabama that historically were among the best in the state.

The Game and Fish Commission is very much aware of this decline. A lot of good research is being conducted by Alabama and other Southeastern states to address the causes of this decline and how to address the future, should this situation fail to correct itself. Added to that, estimating the population is far from an exact science and may be quite difficult to track. The sad part is until the population rebounds, many Alabama turkey hunters are going to see somewhat poor to mediocre hunting as their new normal. For me, this is more than a little depressing.

Why is this happening and what if anything can be done to help? The reasons for the decline are numerous. It is everything from loss of habitat, poor reproduction due to the increasing raccoon population to increases in predator populations, both furred (bobcats, foxes, and coyotes) and feathered (hawks, owls, and eagles). In the opinion of some very knowledgeable people, the liberalization of deer baiting laws has come to the detriment of our turkeys. Adding to these issues is another very big problem: The rapid increase of wild hog populations has seriously impacted what was once some of the state’s best turkey hunting ground.

Can anything be done to help? The answer is yes. There is plenty that can be done but most of it is time-consuming, expensive and often out of the hands of most hunters who do not own the property they are hunting. This is especially true when it comes to addressing the loss of habitat.

Let’s look at each of these issues and what can be done to try and make things better in the years ahead.

This issue is by far the most challenging of all that our turkeys and turkey hunters face. One doesn’t have to drive over much of Alabama to notice a landscape quite different than existed twenty to thirty years ago. Much of the forests especially in the southern third of the state, have changed from a mixed pine/hardwood forest to a pine monoculture. Often, the only mast producing hardwoods in these forests are along the SMZs (Stream Management Zones). In many places, these strips of hardwood trees are barely twenty yards wide. While these trees often provide roosting areas and travel corridors for turkeys, they don’t supply enough acorns and other types of mast to support large flocks of turkeys through the winter months. 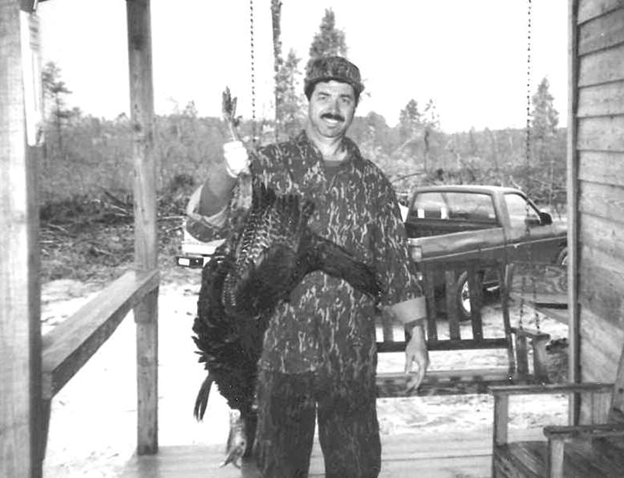 The “Good Old Days of Alabama Turkey Hunting” were all that and so much more. So many great hunts. Photo submitted by Doug Max.

The large pine stands and clear-cut areas often provide excellent nesting and brood habitat, but this does little to supply food during the cooler months when insects are almost non-existent. Therefore, the turkeys seem to revert to the creek drainages and SMZs throughout most of the winter. If these stands of hardwoods are too small, an adequate food supply just will not be there.

Another issue with the pine monoculture is that much of it is in fast-growing Loblolly pines. This type pine cannot tolerate controlled burning until they reach a certain size and age. By that time, many of these forests will become far too thick for good turkey habitat.

Many of these Loblolly pine plantations replaced what once were stands of Longleaf pines. The Longleaf pines were fire resistant even at a very young age and landowners often kept the land under controlled burning plans. This greatly reduced the undergrowth, opening the woods, thus making them ideal for turkeys to travel in.  This practice also caused much new growth to sprout, providing food through the last part of winter and early spring, when food is normally scarce.

Short of preserving much of your hardwood timber, controlled burning of pine stands is the next best tool a landowner has to positively impact turkey numbers.

As discussed earlier, most hunters don’t own the property they hunt and have little to no control of timber harvest practices or permission to control burn the land. On top of that, controlled burning is not cheap and for that reason, many landowners have ceased doing so. Until the amount of controlled burns somewhat approaches the levels of twenty years ago, much of the forest habitat will just not be suitable to sustain large numbers of turkeys.

Nest predators have a far greater impact on turkey populations than carnivore predators. It is very likely that up to 75% of all turkey nests are destroyed by some type of nest predator. The vast majority of these nests are lost to raccoons.

“If you have the time or the money to hire a good trapper, it is well worth it.”

Trapping of coons has dropped dramatically in the last ten years as fur prices are at rock bottom. This has led to an explosion in the coon population and caused devastating effects in the hatching success of turkey eggs. If you have the time or the money to hire a good trapper, it is well worth it. I cannot overstate the detrimental affect coons are having on hatching success.

Carnivore predators, while killing a certain amount of turkeys, are probably a bit exaggerated on their negative effects. The number one culprit of these predators is the bobcat. Bobcats are very stealthy and extremely quick. Not only can they easily catch the young poults, they often ambush adult turkeys. Foxes are very quick as well but are mainly a threat to the younger turkeys.

My opinion on coyotes is that they are somewhat neutral when it comes to turkeys. While they manage to kill a few birds, they also prey on certain nest predators. While many turkey hunters like to hate the coyotes, I think that threat is overblown.

Trapping is the only method for control of all these carnivore predators, but it is very difficult to stay ahead of them. It will require a full-time effort to do so.

Avian predators, especially hawks, are a very real threat to poults the first few weeks of their lives. Due to the fact that killing of all avian predators is illegal, there is basically nothing that can legally be done to address this problem.

In certain areas, the explosion of wild hog populations has been nothing short of devastating to turkey numbers. I mentioned earlier that not only do the hogs destroy turkey nests, but the worst damage they do is also to greatly reduce the amount of hardwood mast. Without an adequate winter food supply, large flocks of turkeys just cannot exist.

Trapping is the only effective means of keeping wild hog numbers in check. Again, this is a full-time job and not an easy task. There are some very effective trapping systems available but they are quite expensive and out of reach financially for most hunters.

Regarding deer baiting, our state’s laws have been greatly relaxed in recent years as to what is considered baiting. The result of this is that there is probably ten times the amount of corn on the ground in Alabama forests versus ten years ago.

Corn obviously attracts turkeys, but at the same time concentrates their feeding zones into small areas. This allows those carnivore predators to more easily ambush the birds.

However, the main problem when it comes to feeding corn is that it exposes the turkeys to certain alpha toxins, especially if they encounter molded corn. Wild turkeys do not have the strong immune system to protect them from these toxins. Time will tell what effect the deer baiting will have on Alabama’s turkeys.

There are thousands of new turkey hunters in Alabama that never knew the good times many of us experienced years ago. Most of them will tell you we have plenty of turkeys. It’s mainly us old timers who can easily see the decline.

This coming spring will mark my 50th turkey season and I have truly been blessed with more exciting moments that I could possibly count. That said, the last several years have given me a bad case of the Alabama Blues. Let’s hope we can turn this around and that we can all be dancing to a different tune.