No matter the season, anglers who are serious about catching speckled trout in our coastal waters need to think about things that smell and we’re not talking now about unwashed anglers after a long day’s fishing. Lures which provide action, color and scent are the best speckled trout lures and much more effective at fooling big speckled trout than lures which don’t provide all of these three factors.

And for day in and day out good trout lures, it’s hard to beat the Fight Club series of soft-body scented lures made by Fishbites, based out of St. Augustine, Florida.  We reached out to Fishbites to find out why their lures are so effective.

And How Did Fishbites Come about?

“Our bait research was undertaken by Dr. William Carr who was the foremost authority on chemoreception in marine species.  His research concluded that bait odors we humans smell in the air, gasses, have virtually nothing in common with the chemicals that fish detect in the water. 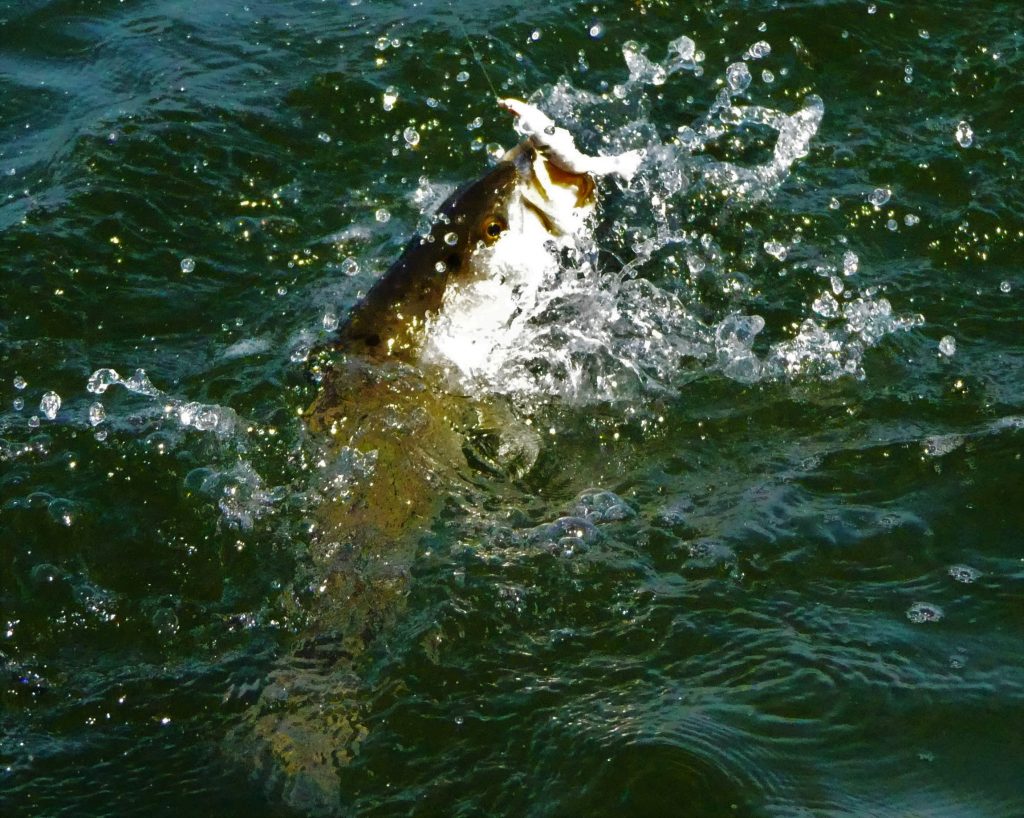 Fish can only detect substances that actually dissolve in water.  As they swim, fish will detect these chemicals with their nose and mouth because they use both in tandem to detect and track down injured prey items,” says Michael Carr, vice president of Fishbites.

“But the scent component is only part of what makes an effective bait.  Once the fish bites, the mouthparts take over and if the anticipated flavor does not match the scent the fish tracked, the fish will often spit the bait out,” Carr explained.  “Think of it this way: if you drive past a fast-food restaurant and smell french fries, and you pull in to get some, if these french fries taste like cardboard, you’re probably not going to get past the first few fries.

Fish are somewhat the same way and Fishbites’ unique flavor/scent formulation has taken this into account from day one of its introduction.  Fish not only attack our lures aggressively, but they hold on longer because of the flavor we infuse into each bait.”

There are Scents, and There are Tough Scents

Scott Jones, Sales Manager for Fishbites and an avid speckled trout angler pointed out that one of the major benefits of their lure is their long “hook life” and the fact they hold up to abuse. 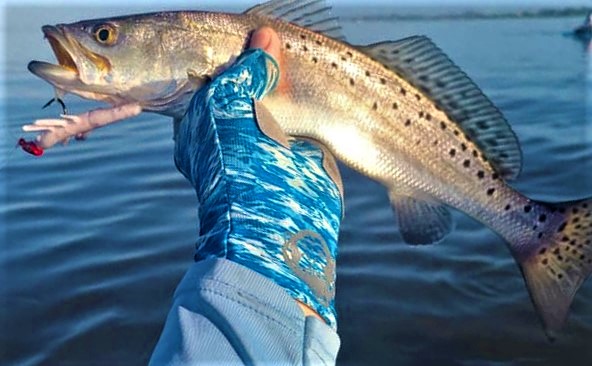 Captain Mike Wilson of Bama Slam Inshore Adventures in Gulf Shores fishes the Alabama Gulf Coast region for specks quite often and he agrees that Fishbites are some of the top speckled trout lures.

“Fishbites Fight Club saltwater baits are extremely durable and outlast other scented soft baits by far.  They last cast after cast, fish after fish, making them a very cost-efficient alternative to other scented soft and live bait.  But most importantly, they catch fish,” Wilson said.

With many other kinds of scented soft lures, anglers are lucky to catch more than a single fish on each bait and this can get very expensive quickly. Fishbites baits attract fish, and the fish can’t tear up the soft scented body easily. 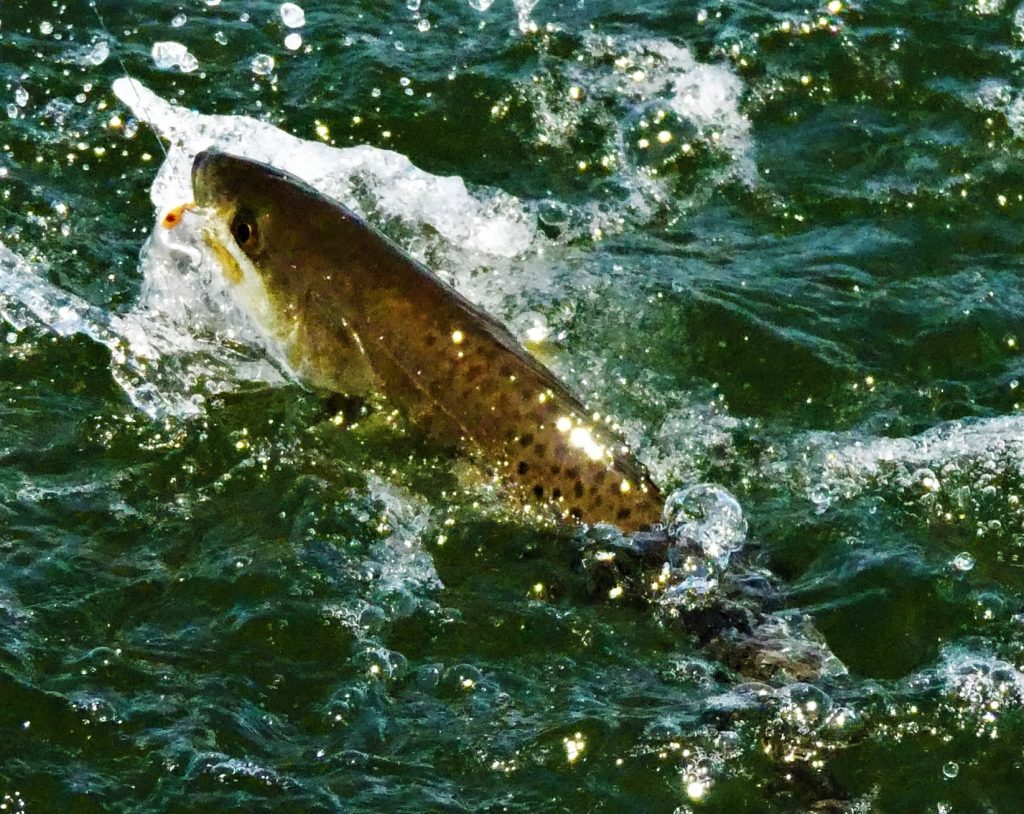 Big specks will jump all over Fishbites.

Still, there are lots of choices for anglers to use when throwing Fishbites Fight Club Series soft scented baits to the specks. A multitude of forms, each with different actions and different colors are offered.

The Fight Club series consists of the Dirty Boxer, which is a curly tail with great action, the Butt Kicker, a paddle tail, the Fighting Shrimp. a natural-looking shrimp and the Brawler, a jerk bait that is deadly on specks when fished unweighted over grass beds These baits do not require a jar or other cumbersome vessel to store them. A simple zip-lock bag will keep the baits in great shape and they don’t dry out as quickly as other scented lures.

How to Fish the Scented Soft Lures for Specks

“I like to use the Fight Club series of lures in clean, moving water around sharp bends in creeks and bayous, and if there’s a drop off, that’s even better. In deeper water, I may go to a 3/8 oz jig head.  Around docks and oyster bars, the Fight Club lures can be deadly,” Jones said.

Also, the Fight Club series of scented soft lures are great under a popping cork for a “search” lure to help locate active specks.

“The Dirty Boxer in white or chartreuse color, specks will take even a motionless bait because of the scent which draws the fish,” Jones commented. “If the specks are on a hot bite and then the bite tapers off, try switching color or body style. A different color or a different action from the lure may trigger the bite again.” 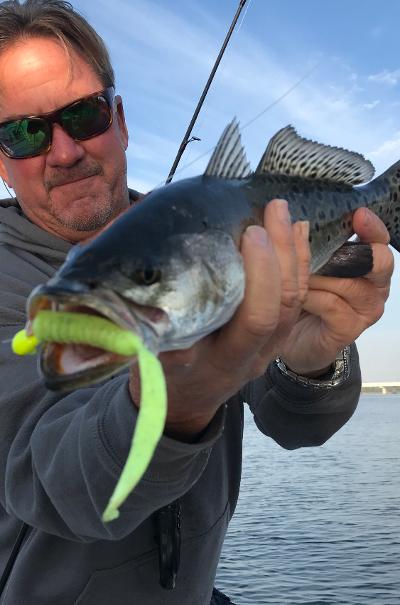 The Dirty Boxer ripple-tail bait gets lots of attention.

Captain Mike Wilson from Bama Slam Inshore Adventures has found Fishbites baits and the Fight Club Series in particular to be some of the best winter speckled trout lures.

“I use a variety of Fishbites Fight Club lures, and if specks are present, one or more of the four selections will usually catch fish,” Wilson said.

When it comes to some of the specifics of fishing Fight Club baits in winter and early spring, Wilson has some advice.

“Whatever bait I select, I rig it on a FCC Lures ¼ oz. jig head.  Most of the time I choose red, but occasionally I will try unpainted, white or yellow.  I tie it on eight pound Vicious low-vis green mono. But when the water is really clear, I drop down to a six pound. test which will garner more strikes,” Wilson said.  “I fish the bait ‘low and slow’, and I mean really slow.

The specks are slow and lethargic in the winter cold water, and they are on the bottom.  Let the bait drop to the bottom before retrieving.  Fish it like you are bass fishing with a plastic worm: slow retrieve, bump off bottom, let it sit, bump it again, slow retrieve.  If you think you are going too slow, slow down a little more.”