At that time, we only had one thermal imaging optic. It was a small monocular with a 320×240 resolution made by the FLIR corporation. It was the best thermal imaging for hunting available and we called it the “Golden Egg”. It was a $6000.00 masterpiece that, when thinking back, I’m sure we looked like the three blind witches in the movie Clash of the Titans as we passed it around and fought over it, wanting to catch a glimpse.

We used the small “Thermal Spotter” to find animals which would appear as small dots if past 100 yards. Standard night vision scopes and monoculars were used to navigate and take the shot. It was cumbersome, but thermal hog hunting was now a possibility. 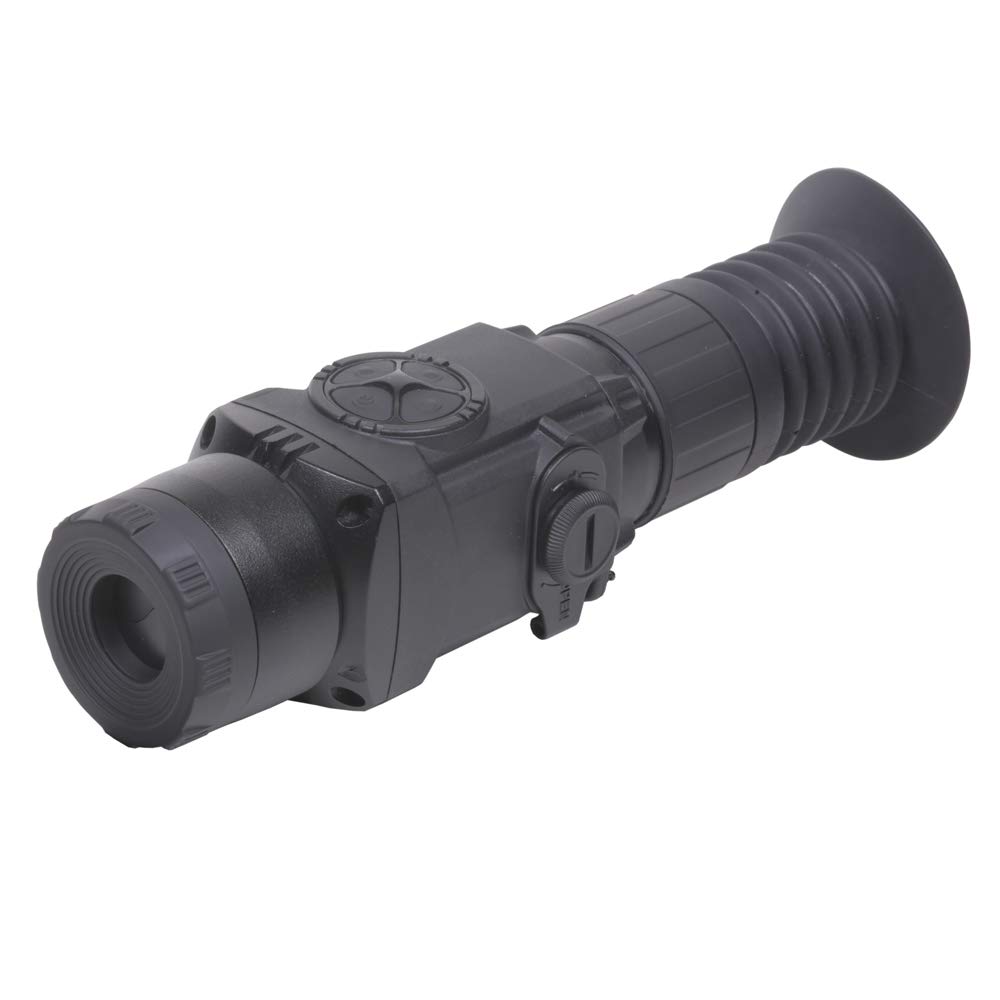 The early days of dealing with thermal imaging technology could be quite the headache, but it was worth it in the end. Now the market for Thermal imaging riflescopes has a plethora of options like this Pulsar Core RXQ30V 1.6-6.4×22 Thermal Riflescope which retails for around $1,900. Credit: Amazon

Night vision, which amplifies light so you can see in the dark, has been on a plateau for the past 20 years in terms of optical technical advancement. While there are newly introduced models offering multiple tubes and colors, for the most part, the image quality and features have remained stagnant. In my opinion, based on hundreds of hours cruising hog hunting land, you must have night vision to navigate with and properly identify animals. Otherwise, mistakes can be made and you surely will stumble through the dark even though you have a rifle topped with a thermal scope.

On the other hand, technically thermal imaging has taken a rocketship type trajectory.

When I started out, the 320×240 resolution spotter was “top of the line” technology. Units with a 160×140 resolution and a slow frame rate were common and would still cost several thousand dollars.

I was the first guy in my initial hog eradication group to acquire a thermal weapon sight. It was a 320×240 resolution with a 30 HTZ frame rate. It was new to the market and worked ok, but I quickly found issues with it that the manufacturer had overlooked.

When I came to thermal hog hunting, this was a frustrating time for me as I knew that the engineers who designed this equipment had little to no field experience and didn’t test these units in varying conditions. My thoughts were confirmed when the company rep rode along with us on a hunting trip and he advised to calibrate the unit while it viewed the sky so as not to get a ghost image in the scope. I soon found that you needed a uniform surface to calibrate against like the lens cover or your hand. It was a truly frustrating learning time that only happened through experience. I felt like I was on my own as this technology was still in its infancy.  In addition, since the best thermal imaging for hunting cost over $10,000.00, there were not many people who had thermal imaging scopes that I could compare notes with.

It wasn’t until 2012 did the FLIR corporation develop what is currently known as 640×480 resolution. That resolution offers a crisp and detailed image which is said to have 4 times as many pixels as the 320 resolution.  It is still the highest resolution available to date. 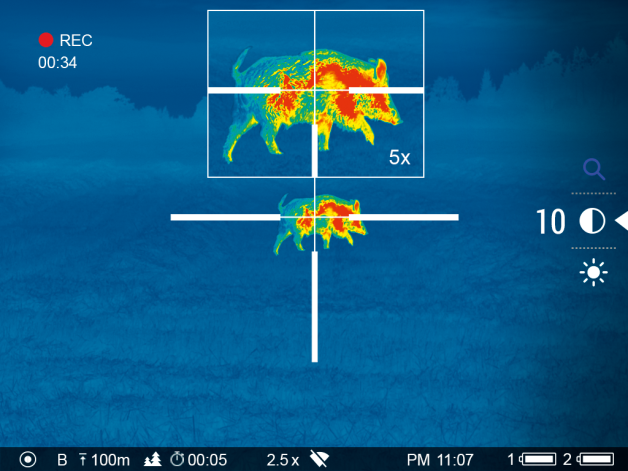 Thermal imaging scope technology, like most other technology, has progressed at a rapid pace. Pulsar offers Picture-in-picture displays to magnify the image at the top-center for precise shot placement. Credit: Pulsar

Another well-known company had developed their own thermal imaging scopes using FLIR brand sensors. They reached out to me and soon I was in possession of their scope that incorporated the newly released 640×480 resolution FLIR sensor technology and I was amazed. I could use this unit in every environmental condition and humidity where the actual FLIR brand military scopes I had would wash out or show no contrast in overcast, high humidity situations. The key was the time they spent on perfecting the firmware in the scope circuit board. 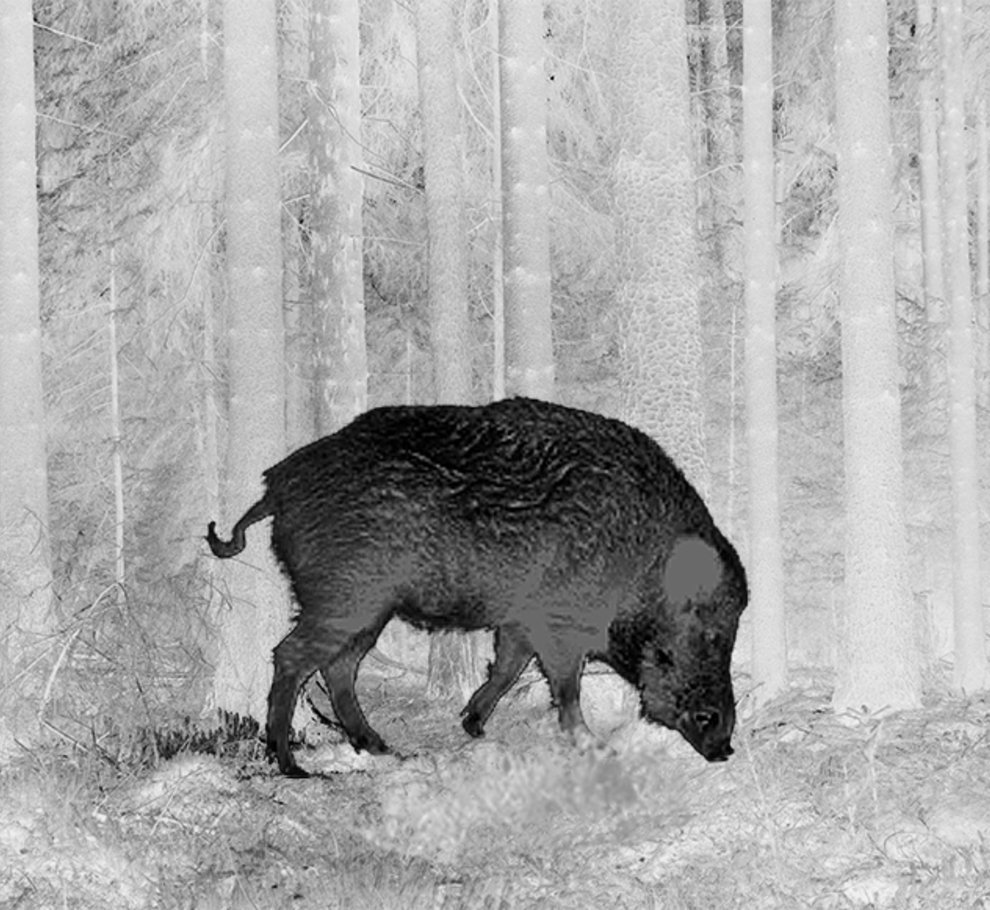 Much the same with televisions, if you can afford a higher resolution thermal imaging scope, get it. The better image quality will help out tremendously. Credit: Pulsar

Generally, the best thermal imaging for hunting has a larger objective lens  with more native magnification. They all have digital zoom, but the native magnification will be the most clear and less grainy. Every time you zoom the scope, the image will pixelate, which divides the image into little boxes which may make identification difficult. This is more noticeable and crucial on the lower resolution models.

I feel that a high resolution scope with a lower magnification of around 1.8-2.5 or so gives you the best of both worlds. You have a sharp and crisp image for those 50-100 yard shots and then if you need to take a farther shot, you can still press the zoom button and have a usable image that’s not too grainy, where if you zoomed a lower resolution scope, the image will be blurry and seemingly unrecognizable. If you must buy a low resolution scope, purchase the one with more native magnification. Usually something with a 50mm lens is perfect in both versions.

Hertz (HTZ) basically is how fast the sensor processes images. The human eye processes approximately 27 frames per second or 27 HTZ. Most scopes and imagers are 30 HTZ. 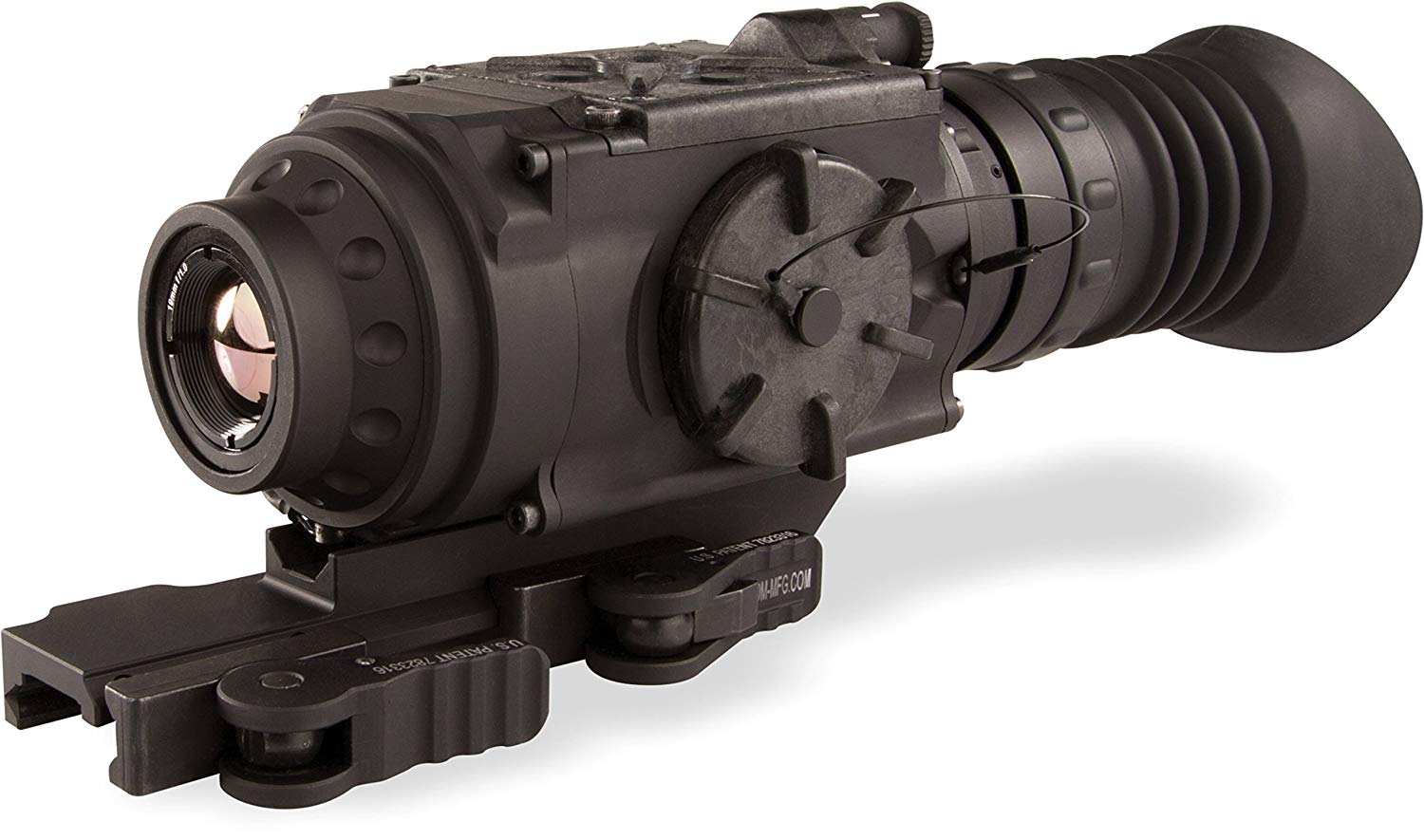 When looking at thermal imaging scopes to purchase, avoid choosing anything with less than a 30 htz refresh rate. The FLIR Thermosight Pro PTS233 1.5-6x19mm Thermal Imaging Rifle Scope above has a 60 Hz core and retails for around $2,200. Credit: Amazon

Most televisions are 120 htz currently so the big screens seem smooth without a blur when the quarterback throws the ball across the field while you watch your favorite team. Same goes for htz in a thermal imaging rifle scope. The higher the htz rating, the smoother the image will look when you pan across a field. 30 htz does just fine and 50 or 60 does seem a little better. But remember, your eye can only process slightly less than 30 so it really does not factor in as much as your gun shop sales guy wants you to think it does. Having said that, if you look through a 9 htz imager, the salesperson has a valid point. Because a 9 htz imager is much slower than your eye speed, it really stinks in a thermal imaging rifle scope so good luck trying to hit running objects such as a hog. When looking for the best, cheap thermal imaging for hog hunting, try and avoid anything less than 30htz.

It is in your best interest to research products and companies and specifically to determine if the company your are interested in has customer service issues. Trust me, you will eventually run into an issue and need to send your unit in for repair.

One of the biggest red flags to look for is whether the company had a reputation of releasing unfinished products, in terms of Research and development. There are some out there. Be sure the company you buy from takes pride in finishing a product before throwing it on the market. Finally compare product warranties and determine how well they back them up.

If you follow these guidelines, you will find the best, cheap thermal imaging for hunting the types of animals, ranges, and terrain that you most often encounter.