Can One Turkey Call Do It All? | Great Days Outdoors

Can One Turkey Call Do It All?

Among the many turkey calls on the market, can one simulate every turkey sound in the wild?

There are a multitude of turkey calls on the market today. Is there one call that can emulate every turkey sound to help you bag a turkey this spring?

Turkey calls have been around for centuries.

In 1940, at an excavation site located in what is now Kentucky Lake, near Benton, Ky., many Indian artifacts were uncovered. Archeologists discovered some wingbone style yelpers that were made from bone and antlers fashioned together. Analysis showed these calls were made of turkey bone and were dated around 6500 B.C.

Today, many turkey chasers use just one type of call for a large percentage of the season. Some old-timers will swear by a box call. Others only use a mouth diaphragm. And some died-in-the-wool hunters fancy an old slate or crystal call.

Turkey hunters are particular about the types of callers they prefer. Some claim even the brand name can make a difference to a wise old gobbler. While a majority of hunters have a favorite call, savvy hunters know they need to change up from time to time.

“While a majority of hunters have a favorite call, savvy hunters know they need to change up from time to time.”

Does one call out there exist that can do everything a turkey hunter needs to get a gobbler into shotgun range? Maybe, maybe not. But we’ll look at some of the most popular models and see if one stands out. 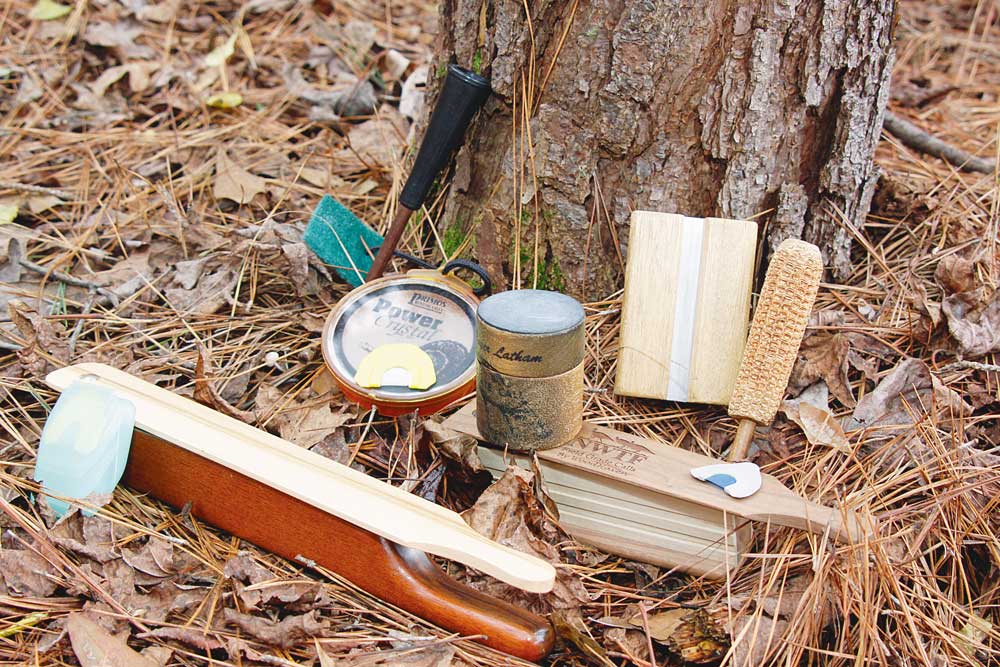 There is a multitude of turkey calls to choose from today. Photo by Charles Johnson

In 1897, Henry Gibson was awarded a patent for the turkey box call. The original call was honed from a solid piece of cedar wood.

Around 1939, M.L. Lynch of Birmingham, Ala. began making and selling calls. Later, he used mahogany pieces glued together and a walnut lid. Lynch sold the company in 1970 and production was moved to Mississippi.

“I began making box calls for Doug Camp and Junior Robinson in 1979 when they started Southland Game calls,” says Donnie Gallahar of Talladega, Ala. “We glued the boxes together using poplar, maple and mahogany.”

A few years later, Camp began his own company—Camp Callers—and Gallahar made all of his box calls. Camp and Gallahar came out with a long box call. The call could produce very loud, high-pitched turkey yelps. It soon became a favorite among many turkey hunters.

Gallahar made the long box from poplar with a hard maple lid. He says this gives the call a very high-pitch sound. They dubbed the call Screamin’ Hen for its loud, high-pitched calls. Also, Gallahar and Camp developed a shorter box, Kee-Kee Box, just for kee-kee type calls.

“You can do all the yelps, clucks and purrs on a box call,” comments Gallahar. “We never tried to make a gobbling box with any of our calls. We hunted public land and didn’t want to get shot.”

Certain box calls, like the Lynch, can be used to gobble. It takes a little practice and setup, but it can be done. The long box is preferred for hunting windy days since it produces a much louder volume.

A box call is probably the easiest call to learn how to use. All of the basic turkey calls can be made with a box. Most boxes have one side a little thicker than the other. This allows for different tone and pitches of simulated turkey sounds. With minimum practice, a box call right out of the package is ready to hunt.

“You can change the sound on a box by canting the lid in a different direction when calling,” Gallahar explains. “Also, you can put downward pressure on the lid, which will change the sound.”

Gallahar advises using chalk on the box lid to keep the sound smooth. Do not use a chalk that has oil in it. This can cause a squeaky to less-than-desirable sound to come out of the box. He recommends the lid be cleaned at least twice per season using a fine Scotch-Brite pad or 150 grit (or finer) sandpaper to remove excess chalk.

Moisture can affect the sounds of a box call. The box call can be used on drizzly, rainy days afield by placing in a plastic bag. Some old-timers used empty bread bags to protect the box and call in a gobbler during rainy weather.

Gallahar has hunted turkeys since 1972. Over the years, he has taken hundreds of turkeys across many different states. He stated that he liked the long box around 75 percent of the time for turkey hunting.

Gallahar enjoys building calls and calling in old gobblers. But he gets a thrill, he says, hearing stories from kids and women about taking their first turkey.

Around 1912, a patent was issued for the first crude slate friction call.

Over the years, this type of call has seen many improvements and variations in materials. Still, the slate call is a formidable call that can entice its share of springtime gobbles. The slate friction call is also popular among fall turkey hunters.

Originally, the slate call was referred to as the pot-and-peg call.

A piece of thin slate was affixed to the top of a hollowed-out box of wood. A wooden dowel or peg about the size of a pencil was inserted in the end of a corn cob or round piece of wood. The point of the peg is usually rounded off to a blunt point. The peg is drawn across the slate with slight pressure to create turkey sounds.

“I like the slate over the copper, aluminum or crystal type callers,” Gallahar reports. “The slate caller has a more realistic sound of a turkey than the other calls.”

The slate or other friction type callers require more practice than the box call. The feel of the peg or striker on the surface of the call must be learned. Also, the angle of how the peg is touching the surface can make a difference in the sound of the call.

Once learned, all of the calls of the wild turkey can be emulated from a slate friction call with the exception of the gobble. Many of the friction callers are compact and easy to carry in the spring woods. Different strikers can be used to obtain various sounds.

“A hardwood peg seems to do better on slate calls,” says Gallahar. “But sometimes it depends on the mood of the turkey.”

On slate calls, chalk can be applied to the surface for a smoother sound. With glass and crystal calls, a rough sanding stone is needed to rough-sand the surface before attempting to use the call. Hunters should practice with different strikers to obtain the turkey sounds they desire. 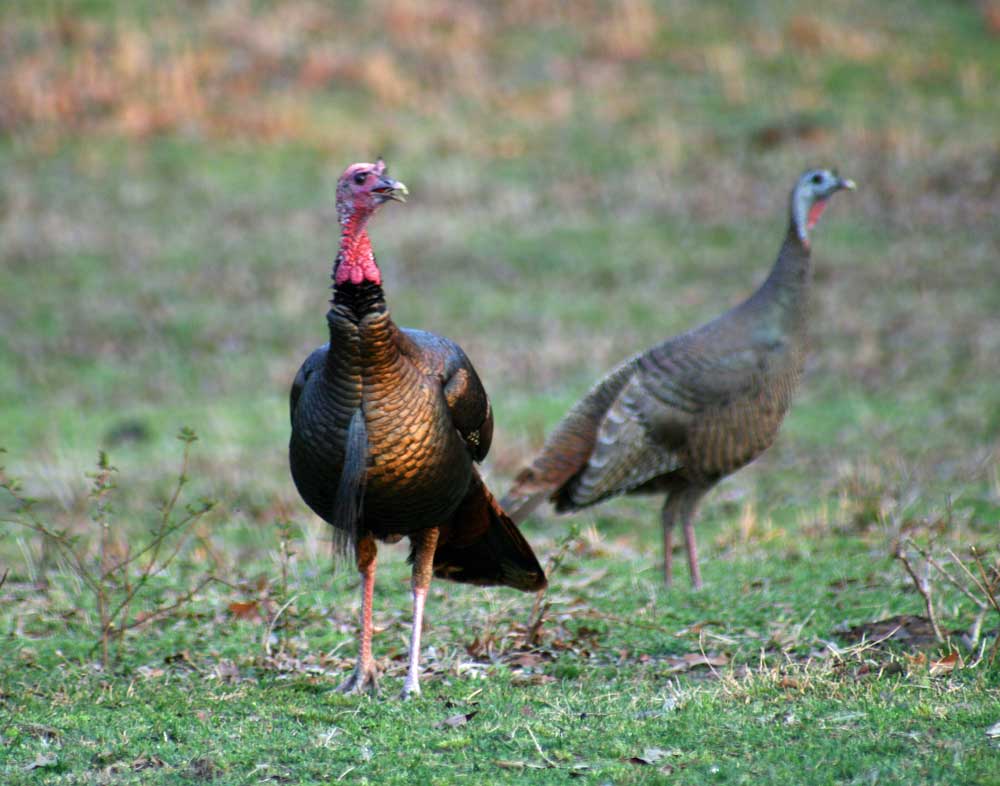 In some areas, turkeys may get accustomed to a certain type of call. Photo by Charles Johnson

Probably the most popular caller among spring turkey hunters is the diaphragm or mouth call. Compared to other turkey calls, the diaphragm mouth call came about a little later.

One of the first patents for the diaphragm call was issued in 1929. Improvements and modifications have been made over the years by various companies.

The mouth call is a relatively simple caller. A piece of thin rubber or latex is stretched across a soft metal frame. The frame is horseshoe-shaped and the rubber reed is held in place with a durable type of tape. Callers are trimmed and are half-moon shaped once completed.

“The advantage I like in using the diaphragm is having the gun up in position and still being able to call,” Gallahar says. “There is little movement when using a diaphragm call.”

That is one of the main advantages in mouth callers. Turkey hunters can call to the turkey without making any movements with their hands. Box and slate style calls usually require two hands and there is some movement, although it’s very slight.

The mouth caller can make every sound of the wild turkey.

However, it’s one of the most difficult callers to learn to call effectively. Many novice hunters gag when they first attempt to use a mouth diaphragm. This is one caller that you just can’t use effectively when you first start out.

“By using some pressure from your tongue on the reed, you can make different sounds,” Gallahar says.

Another disadvantage of mouth callers is they do require a little more care. Gallahar has heard from some hunters of diaphragm calls over the last six years. He recommends keeping the call in the original case and in a cool, dry place when not in use.

So can one call do it all for springtime gobblers? For a majority of turkey hunters, probably not. But, whatever call you choose, when that old gobbler sounds off and walks into shotgun range, you know it will be a great day outdoors.