When to Choose a Forestry Mulcher for Wildlife Habitat

When to Choose a Forestry Mulcher for Wildlife Habitat

For a hunting landowner, managing the property is an ongoing process. There are roads and firebreaks to be built and maintained, timber to be thinned and selectively cut to provide sunlight for forage plant growth, brush needs to be cleared with a forestry mulcher, mid-story growth needs to be dealt with, food plots need to be planted and maintained and much more. 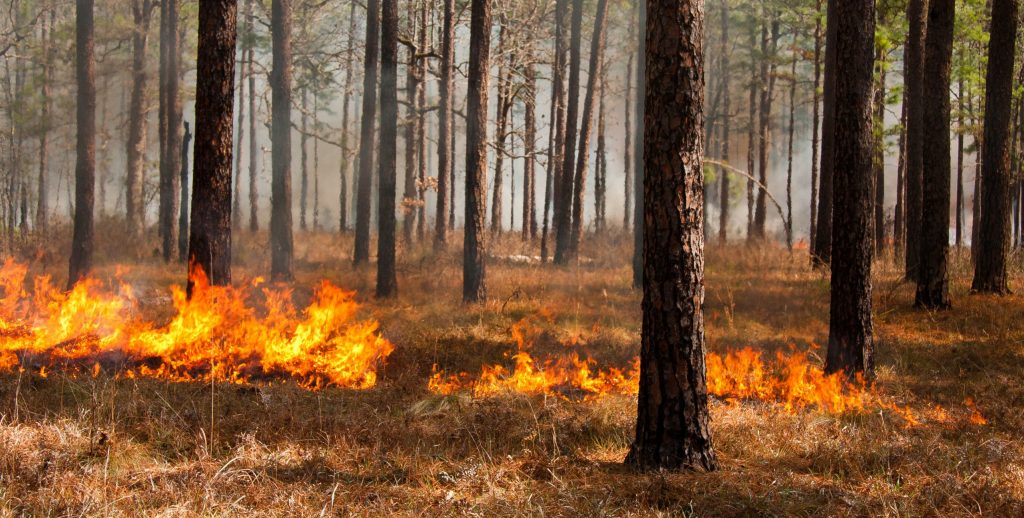 A controlled burn is an effective way to maintain overgrowth but, in much moire dry conditions, burning isn’t always the safest option.

Controlled burning is a recognized and efficient way to reduce the build-up of overgrown brush and forest “litter” that can result in uncontrollable and destructive wildfires. It can reduce insect populations, destroy invasive plants and the ashes return nutrients to the soil.  By opening the forest canopy, sunlight can penetrate the forest floor and help young trees and forage plants grow, providing a food base for wildlife.

While controlled burning is a recognized land management tool there are situations where it can’t be utilized.  If an area is in a drought situation, a fire can be dangerous.  In addition, depending on the location and proximity to urban areas, there may be government restrictions on controlled burning making it unfeasible except during certain times. Additionally, undesirable plants can often become so established that prescribed fire is not the best choice to terminate them.

That is where other tools, such as forestry mulchers come into play.

We reached out to Brian Shepherd Brush Clearing Services, with offices in Georgia and Arkansas, Georgia to bring us up to speed on what forest mulchers can do and considerations for their use. That interview can be heard below. Forestry munchers can be used for many types of land management jobs. From habitat restoration projects and mid-story removal to food plot creation and expansion.

There are different types of forestry mulchers. While the less powerful ones are effective and fill a need, they are limited to smaller applications which is why BCS runs 300 to 600 horsepower machines that are able to work on a much larger scale.  That increased horsepower allows for quicker project completion which equates to greater value for the landowner.

“I have learned over the years that you can take a big machine and cut small material with it but you can’t take a little and cut bigger material with it. Sometimes you just need bigger machinery with more horsepower to be more productive,” Shepherd explained. “Working a forest mulcher is a very tough environment on equipment especially in the hot summer months and we found that with bigger machinery we have less breakdowns and downtime.”

When is a forest mulcher the best choice for land management?

Shepherd used the example of a 20-year-old pine stand that has been thinned and has a dense stand of mid-story material in the four-to-six-inch diameter range that is 20 to 30 feet tall and you may have trouble getting fire to burn that back.  He also said that in cases where the under-story is big or tall there is the chance that the fire will be too hot and jump over the tops of the trees.

“That is where a forestry mulcher will put that mid-story down on the ground and reduce it to a point where you can manage it with fire or herbicide,” Shepherd noted.

“Fuel load reduction” comprises a large amount of BCS’s business because of the risk involved in not removing this material, be it standing or lying on the ground. The years of huge forest fires that have occurred in the west are largely because of the excessive “fuel load” that has accumulated because of the lack of under-story and mid-story management.

“We are seeing a lot more state and federal contracts that are written specifically with fuel load reduction and even from private landowners who recognize that the mid-story is high up and they could do more damage than good by running a fire,” Shepherd said.

Shepherd pointed that another area in which forestry mulchers contribute is in creating and maintaining firebreaks. 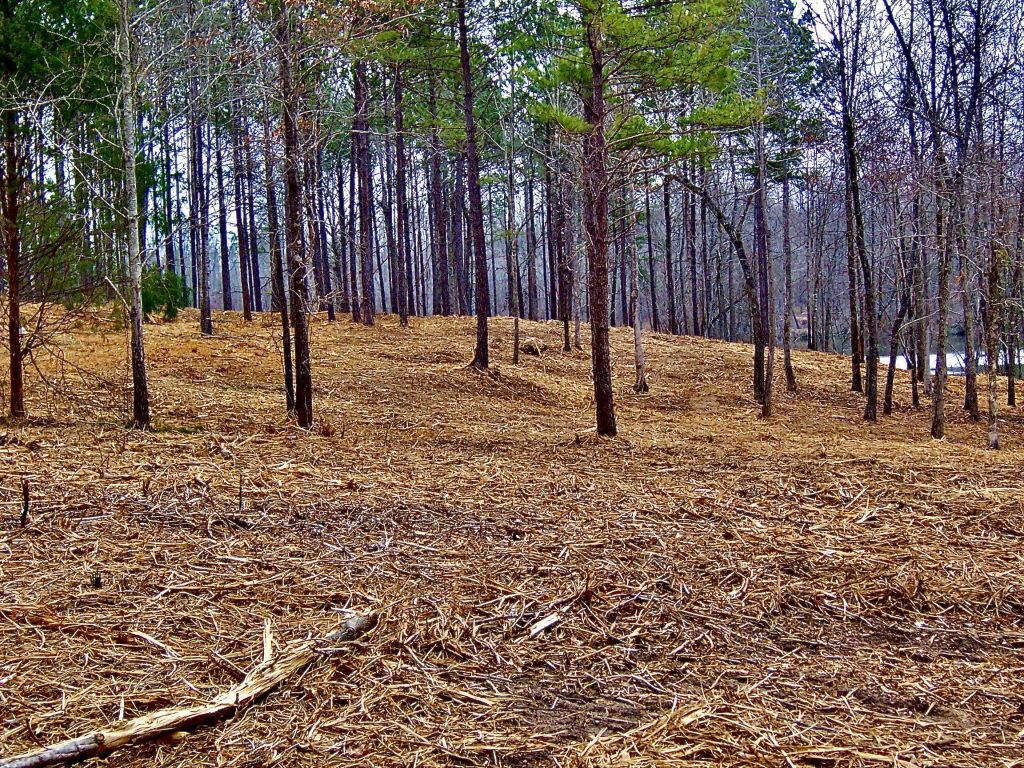 Maintaining a large firebreak is the perfect job for a forestry mulcher.

“We can go in and initially open a firebreak up to 20 plus feet wide, so it’s going to create a road or trail access as well as a break,” Shepherd noted.  “But you need to use either a heavy fire break plow on the back of the dozer or a heavy offset plow on a tractor to make sure the break is plowed dirt.”

“If you leave that mulch there for any length of time and it isn’t plowed, it will be all dried out and will be a tinderbox and a fire is going to burn right across,” he said.

In addition to facilitating firebreaks utilizing a forestry mulcher can be effective in re-claiming roads and minimizes soil disturbance and erosion.

According to Shepherd, in order to have a good road system there has to be sunlight hitting the roads to dry them out.  If it has a lot of vegetation encroaching on it and a lot of shaded areas there are going to be constant wet spots and they are going to become wet holes or ruts.

“Where the mulcher is really good is at widening these roads and getting them daylight and it can also create some edge effect if you widen them out to between 20 and 30 feet on either side.  That way you can maintain the edge with a rotary mower or herbicides,” Shepherd said.

Utilizing a forestry mulcher instead of a bulldozer or even a tractor for mid-story removal isn’t as harmful to root structure of the trees that are to be kept.  If those trees are in poor health to begin with you run the risk of substantial collateral damage.

“Whether we are removing the mid-story or getting rid of some invasive species that are trying to take over, by using a forestry mulcher we are reducing the chance of root and soil disturbance and we don’t impact those trees that much,” Shepherd said.

While forestry mulchers can do a multitude of tasks sometimes there are situations that push their limits.

Shepherd says that expanding food plots that have encroaching vegetation is relatively easy.  If you have an area that you want to make into a food plot and have ag ready, if the trees are bigger than about eight inches in diameter forestry mulchers may not be your best bet. The environmental impact of the brush clearing process should be taken into account before starting a project.

“In some cases, the mulcher isn’t going to work for new food plots if you are talking about bigger trees.  You are going to need to stump it and root rake it because if you leave all those stumps in the ground it is going to take several years before you are going to be at a point where you can run any kind of ag equipment there,” Shepherd noted.

Regardless of how careful and mindful you are of the environmental effects, mulching and using heavy equipment does affect the ecosystem and wildlife.  Shepherd pointed out that there are two major considerations in any project.

“Number one is to minimize environmental impact so we want to be sure it’s dry enough so that there isn’t a lot of soil disturbance that can damage plant communities,” Shepherd said.  “The second is the timing of the year in terms of the effect on wildlife, like ground nesting birds and to minimize wildlife mortality.”

“In a perfect world it would be nice not to run any mechanical equipment, like a forestry mulcher, from mid-March to July 1st,” he said.  “But that is going to depend on where you are in the country, what you want to do, the weather and it can be a narrow window of opportunity.”

Shepherd stressed that anyone managing their property for timber, wildlife and recreation has to do their homework, work with a forester or a biologist, come up with maps, determine objectives and establish a time frame as to what you want to do when and by whom.  He also stresses that you need to have “boots on the ground”.

“You can look at aerial photos in Google Earth all day long but everything is different in the woods,” he advised.  “Once you get out there and start walking and look at everything, you can determine what is going to be the best things to do at what time of year for a particular project.”