It’s nice out here a half-mile off the beach at Orange Beach. The breeze is light, but cool. There is no heavy boat traffic coming out of Perdido Pass like just a couple of months earlier. Kids are back in school. Folks are back at work and I’m in my kayak fishing. That’s the way things ought to be. I am sure most kayak anglers can relate.

My cigar minnow bait is trolling very slowly behind me as I just keep the kayak moving enough to make the bait gently move through the water. Just at this moment of peace and quiet, everything changes and it changes fast.

My rod bends way over. My reel squeals and whistles as line is ripped off the spool and the drag allows line to run off the reel at a rapid pace. All I can do is turn my kayak around to face the direction my unseen opponent has decided to run, hold on and wait to see what happens.

My kayak starts to move slowly as the big fish I’ve hooked pulls me and the easy-floating kayak along. We’re going on an Alabama Gulf Coast sleigh ride, one of the most thrilling things that can happen to an off-the-beach kayak angler, and I can’t wait to see what I’ve hooked. 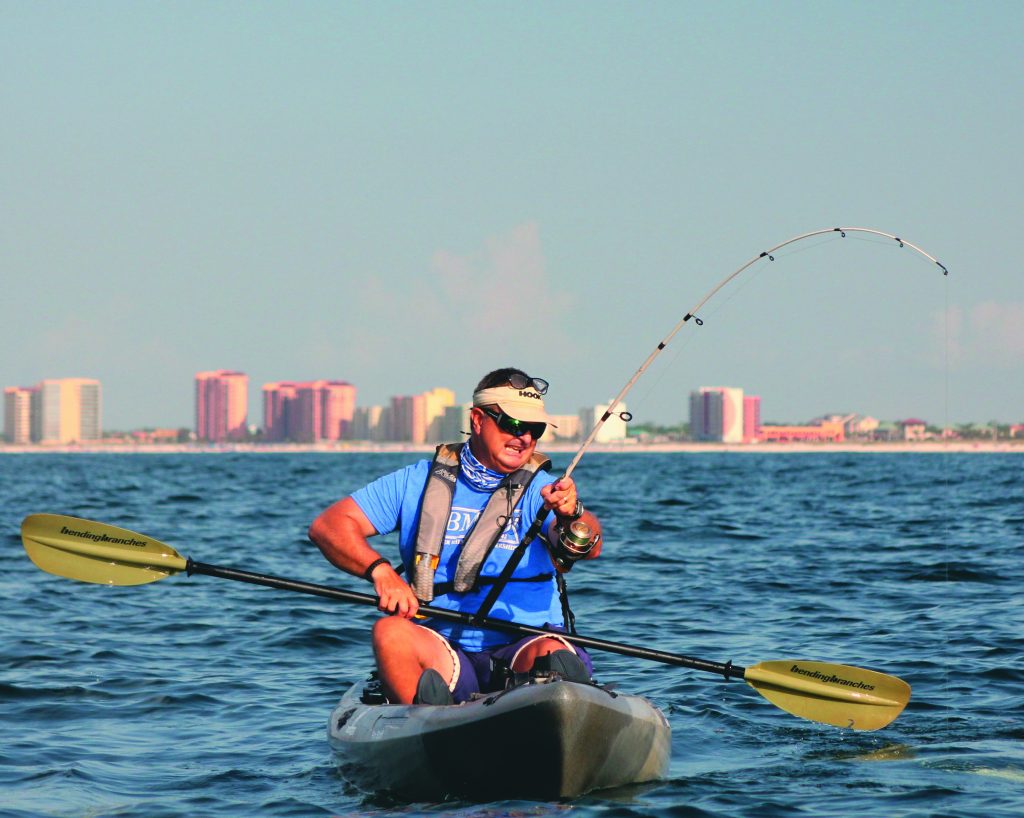 Tim Perkins, a river bass tournament angler on most kayak trips, has found something quite a bit bigger than the usual river bass. Photo by Ed Mashburn

What Can We Catch?

For most of the year, kayak anglers who launch their lightweight boats off the beaches on the Alabama coast can expect to meet up with some big, strong fish. Just what kind of fish a kayaker might encounter depends on the time of year.

For instance, in summer and early fall, kayak anglers can reasonably expect to find Spanish and king mackerel anywhere from a couple of miles offshore to just past the second bar a couple hundred yards off the white sand. These mackerel are prime kayak angler targets. They both will devour frozen or live cigar minnows or Spanish sardines in a heartbeat. They are both great fun to catch from a kayak. Big kings will tow a kayak and give an angler a real thrill for a short time.

“Big kings will tow a kayak and give an angler a real thrill.”

In the summer, anglers can find schools of big, strong, aggressive jack crevalle near the beaches. When one of these bad boys takes off, the kayak will really move and big jacks don’t give up easily.

Kayak anglers will often encounter those mini-tuna, locally called bonito. These strong fish will tow a kayak and angler for a long way. A 10-pound or larger bonito is a really tough customer that often takes live baits intended for kings and other better-eating gamefish.

Almost all year long, kayak anglers can look for birds working offshore from the beaches and find schools of redfish. Big bull redfish are more fun than the law ought to allow for kayak anglers. A 30-pounder will give a kayak angler a sleigh ride for a long time before it tires.

Of course, there are some very large sharks just off the beaches in Alabama and a shark is just about the toughest character any kayak angler can find. Sharks are fun to play, but they should not be brought into a kayak. Don’t try to unhook a shark! Just cut the leader a foot or two above the hook and let Mr. Tooth go. He’ll get rid of the hook very soon with no harm done to anyone.

In short, there’s always something for kayak anglers to catch when fishing off the beaches of Alabama.

How do We Rig?

Kayak anglers can use the same gear for their offshore fishing that they use for catching bull reds or big kings off the piers. A medium-heavy 7-foot long rod is good. For a reel, either a spinning or level-wind will work just fine as long as it holds at least 250 yards of line. Of course, if the kayak angler is purposely targeting tarpon or other truly big gamefish, the equipment needs to be considerably heavier.

The biggest thing when it comes to getting equipment together for off-the-beach kayak fishing is to have gear that can handle a lot of different kinds of lures and baits. Kayak anglers can’t bring a whole garage full of rods and reels along on a trip, so rigging needs to be flexible.

It is not only possible, but also a great deal of fun to take a 9-weight fly rod along on a kayak off- the-beach fishing trip. It’s hard to cast a fly rod sitting down in a kayak, but if the kayak angler can quietly paddle into close casting distance to a school of feeding Spanish mackerel or reds, hooking into a strong fish on a fly rod is just about the most fun kind of fishing possible. Fairly large white or chartreuse streamer flies work well. Sometimes big white poppers on the surface can elicit some monstrous strikes.

However, the most common rig for kayak anglers to use when fishing off the beach is the traditional wire leader live bait stinger rig. This rig allows kayak anglers to hook and play big toothy fish like king mackerel. Also, using this live bait rig means that the kayak angler can slow-troll and keep the craft under control and in good position for when that big fish hits.

By the way, set the reel drag very light when slow-trolling a live bait. Just enough drag to keep the bait itself from pulling line out is good. When that big king hits, you want the fish to be able to run and run without too much pressure to either pull the hooks or break the line. After that first smoking-fast run, the drag can be tightened down and the fish worked in.

One of the true advantages of kayak fishing for big fish is that because kayaks are so light and tow so easily, big fish can run and pull against the reel drag, but the kayak itself will move and help keep the line from reaching breaking point. A kayak is truly a superb way to play big fish on relatively light line. Just be patient and let big fish play themselves down and tire enough to be landed.

Where Can We Go?

Even though Alabama doesn’t have a long coastline, anywhere along the Alabama coast that anglers can legally park a vehicle and drag a kayak across the sand to the water puts the paddle angler in good territory for fishing. Many public access areas offer kayak anglers good launch spots so please be considerate of swimmers and other folks who may be on the beach. Try to avoid beach spots where smaller kids are swimming, too. Please be courteous and do not try to drag a kayak from the roadway across private property.

A very good place for kayak anglers to access the deep water of the gulf is Perdido Pass. There’s a wonderful kayak launching spot on the east side of the Perdido Pass Bridge. There’s a good public restroom and shower facility and the water of the pass is only a hundred yards or so from the parking area. Kayak anglers can unload the ‘yak, park the vehicle and be on the water in less than 10 minutes from this spot – and what water this is!

Perdido Pass itself can give kayak anglers some great inshore fishing around the bridge structure for reds and mangrove snapper. A live shrimp dropped down along the hard structure won’t last long in Perdido Pass. During cooler months, the big rock jetties toward the outside end of Perdido Pass produce some of the best sheepshead fishing anywhere along the whole Gulf Coast. Paddle out to the jetties. Find the most protected spot along the structure and let a shrimp or fiddler crab on a circle or kahle hook go down along the rocks and see how long the black and white sheepshead can resist the free meal.

Kayak anglers can paddle or pedal out through the pass and be on the big water of the Gulf of Mexico in less than 30 minutes. Then, all kinds of big gulf fish are possible to catch. Some very big kings and Spanish have been hooked and caught just east or west of the pass where the water changes colors and drops off deeper. 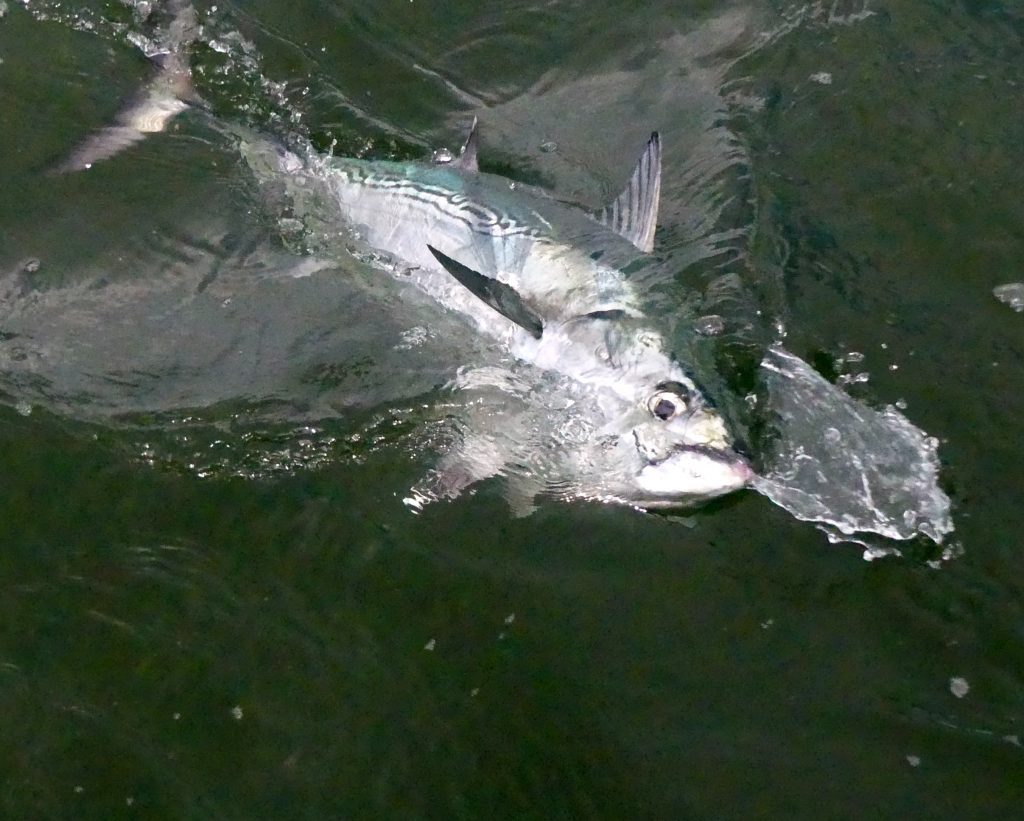 Bonito aren’t good to eat, but they are very strong fighters and they will make a kayak angler work hard. Photo by Ed Mashburn

Kayak fishing is a wonderful way to catch some big, strong fish just off the Alabama coast. However, like any other kind of fishing, there are times when kayak trips off the beach should be rescheduled until conditions get better.

For instance, when the surf is too high, it can be very difficult and very dangerous to try to launch a kayak. In fact, launching a kayak in high surf conditions is the best way I know of to get to buy a whole lot of new fishing equipment. If a kayak gets sideways in the surf, it will roll over and anything in the small boat not securely tied down will be gone. Not only is launching in too high a surf a good way to lose a bunch of equipment, it’s a good way to get hurt – or worse. Any kind of boat in a high surf is very dangerous and a person who is in kayak that gets rolled in the surf is at risk of injury.

“The light, flat, polite surf of this morning may turn into a raging, rolling, hard-breaking thug of a surf if the afternoon breeze kicks up and builds the waves.”

So, how high is too high when it comes to surf and launching a kayak from the beach? It’s impossible to make a general statement, but if the kayaker looks at the surf and wonders, “Is that too much surf for me?” then it’s probably too high for a safe launch.

In my opinion, and this is the standard I use for myself, if the surf is breaking much over my knees when I take two steps into the surf, it’s too high. I would rather come back and launch on a day when I know that I can handle the surf than to take a chance and have a disaster of a day.

Also, kayak anglers must be aware that the surf conditions can change in the course of a day. The light, flat, polite surf of this morning may turn into a raging, rolling, hard-breaking thug of a surf if the afternoon breeze kicks up and builds the waves.

The best thing a beginner off-the-beach kayak angler should do to help ensure a safe trip is to wear a good personal floatation device at all times when in the kayak. The next best thing – go fishing with someone who has been there before and who knows when conditions start going downhill. An experienced kayak angler can help a newcomer avoid many potential problems in equipment selection, judgment of conditions as well as launching and landing procedures.

A good source of local kayak fishing information is the Mobile Bay Kayak Fishing Association (mbkfa.com), an online group of kayak anglers who use their fine site to arrange trips, give advice and discuss kayak fishing topics.