A mighty oak stands tall in the late winter chill, its bare limbs and branches an indication of changing conditions. Even though the oak appears lifeless, there is life inside and nearby. The mighty oak still provides refuge and rest for wildlife.

Nestled in the joint of a branch and the trunk, a gray squirrel was napping in the mid-morning sun. The scaly bark and shadows from above camouflaged the squirrel almost completely. The long hairs of its tail flittered in the light breeze. Near the base, another squirrel scoured the leaf litter for more acorns.

A hunter, stealthily squirrel scouting and stalking a few yards distance, picked out the sound of rustling leaves. His head turned and his eyes focused on the movement. Slowly raising his rifle, the crosshairs of the scope settled across the squirrel. With the crack of the rifle, the squirrel dropped lifeless on the forest floor.

In a scurry, the napping squirrel rushed out on the limb. A slight hesitation and another rifle crack, found him next to his cousin. The hunter remains motionless. Only his eyes move in search for another bushy-tailed target. Slowly he moves to retrieve his game.

A squirrel hunt in the late season can provide many opportunities for hunters. This is a great time to get outdoors and take a kid squirrel scouting. Also, deer hunters can use the time to scout and locate new areas for next season. Savvy turkey hunters might also locate the hangouts of an old tom.

Most older hunters cut their teeth on squirrel scouting. Some younger hunters today moved from a squirrel hollow to a deer stand, but both recall the tactics and skills developed from hunting bushytails. While squirrel hunting may not be as popular as other species, it can still be a training ground for young and old hunters alike.

“Don’t look for the whole squirrel. Try to pick out an ear, a hump or something that does not look natural in the tree.” — Tyler Ponder, squirrel hunter

“I started out squirrel and rabbit hunting with my uncles,” mentions Tyler Ponder of Cleburne County, Ala. “After learning how to hunt squirrels I moved on to deer.”

Ponder said they hunted squirrels ether by sitting and waiting on them to move or by stalking or slipping slowly along creek bottoms. After scouting squirrels, they would move in closer if needed to get a shot. The tactic is similar to a spot and stalk on deer.

Late season squirrels can be more skittish than in early October. In some areas, there have been plenty of hunting traffic in the woods. Even though squirrels weren’t the primary target, they were scared enough to become better hiders.

Usually a squirrel’s first defense is to scamper up a tree. They can flatten out on a limb or curl up into a ball of fur in a fork of a tree. Late season hunters can use this to their advantage. Picking out a bushytail in the branches of a 40-foot tall oak is not as simple as it sounds.

“Don’t look for the whole squirrel,” Ponder advises. “Try to pick out an ear, a hump or something that does not look natural in the tree.”

One trick some old squirrel hunters use is for one hunter to remain still and watch the tree while another hunter circles around to the other side. Sometimes the squirrel will shift position slightly, but enough for the first hunter to pick him off.

Throughout the Cotton State, squirrels are plentiful. With the diverse habitat around the state, the wily bushytails can make their home almost anywhere. However, in the winter months, certain areas will harbor more squirrels than others.

“Creek bottoms with a few oaks are good spots to locate squirrels,” Ponder reports. “Sometimes there are left over acorns in these areas.”

Ponder mentions squirrel scouting along creek bottoms is a little easier in the damp leaves. Also, these spots are more likely to have water oaks, which tend to drop their nuts later in the season. Small branches and creeks running through a pine plantation are usually left standing for stream management zones.

Another area squirrels are likely to feed are along agriculture fields. Edges along hedgerows or forest borders may have some remaining soybeans, corn or peanuts. There could be remnants of some grain that was not harvested.

Weather can be a major factor for late season squirrel scoutings. Cold, blustery days will have old Mr. Bushytail curled up in a hollow tree. He won’t be much inclined to venture out and play. Windy conditions make it difficult for squirrels to detect danger. Also, a hunter will have a challenge to see a squirrel in dancing tree limbs.

Crisp, still mornings are probably the best time to bag a limit of squirrels. As the sun peaks over the horizon, squirrels begin foraging along the ground for acorns and seeds. The scratching of little feet in the frosty leaves will give away their position.

Ponder advises not to shoot the first squirrel that shows itself. Be patient, and watch for other squirrels to join in on the breakfast party. Sometimes after the first shot from a .22 or .17 rifle, the other squirrels will freeze motionless. They will attempt to locate the direction of the sound and a ready hunter can pick off another bushytail.

An accurate rifle with a quality scope will offer longer shots in the bare, winter woods. Shots at 40 or even 50 yards are not uncommon. Squirrels are a small target, but with practice and an accurate rifle, the long shot challenge can pay off. 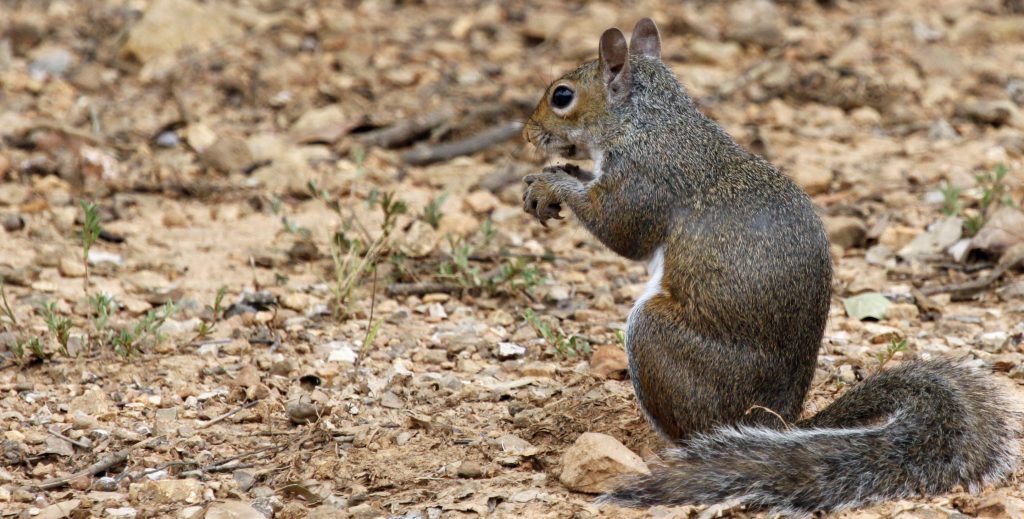 During the winter, squirrels spend more time feeding on the ground. Photo by Charles Johnson.

Another advantage of squirrel scouting in the late season is the opportunity to scout for deer and turkey. With squirrel season open until March 5, that’s only 10 days before spring turkey season opens in most counties around the state. Hunters will want to listen for any gobbles on those cool, still mornings.

“Don’t try to call to the turkeys,” advises Bob Phillips of Lincoln, Ala. “Your calling will only educate that turkey before the season arrives.”

Phillips mentions hunters should listen and note the location where the turkey is gobbling. Old toms like to hang around the same area, especially if there are some hens around. Chances are he will be close to the same spot on opening morning of turkey season.

Turkey scratchings is another sign squirrel hunters might run across in hardwoods and mixed pines areas. Turkeys love to scratch up the forest floor to feed on acorns, nuts, seeds and insects. These raked out areas can be several yards across. By observing the fluffed up the leaves or pine straw, hunters can tell how fresh the scratching sign is.

“In the winter months turkeys, usually will roost in pines,” mentions Phillips. “Look for a group of large pines off the side of a ridge.”

Hunters will also want to be observant for deer sign. Your squirrel scouting may take you into a new area where few hunters have ventured. Be on the lookout for rubs, tracks and trails that indicate deer are using the neighborhood. In some sections of the state, deer may still be making scrapes.

Deer trails along the forest floor will stand out fairly well in the fallen leaves, especially a regularly used trail. Hunters may want to backtrack up or down the trail to determine where the deer might be coming or going. It’s possible to locate a feeding or bedding area.

Hunters will want to mark the spot on a map or use a GPS unit. Surveyor’s ribbon is another option to mark a candidate spot for additional scouting. This will be the place to set a stand for deer season in about seven months.

Late season squirrel hunting provides another opportunity for adult hunters to get a kid in the outdoors. This is the perfect time to introduce a youngster to hunting. Squirrels are plentiful and they provide the perfect scenario to teach kids and novice hunters about stalking, tracking and shooting.

The hunting and woodsmanship skills passed along to newbies will never be forgotten by either teacher or student. Each will treasure the memories of squirrel scouting and a great day outdoors.