Turkey hunters must change their calling tactics to bag late season birds. Here are some late season turkey hunting tips so you can get that gobbler.

Hunting pressure can be a relative term. In some areas, turkeys may be hunted hard every day of the season. While in other areas, gobblers may only feel the pressure a few days a week. Unless a hunter owns the land being hunted, there can be no control over hunting pressure.

Public hunting areas probably receive the most intense pressure. In some cases, a gobbler can sound off and immediately five or more hunters start competing for the bird’s attention. Unless it’s opening day of the season, no one knows how hard that one bird has been pressured already.

Hunting clubs may not be much better in regards to hunting pressure. However, most clubs have a sign in board so everyone knows where and when others have been hunting, at least if the members are following the rules.

Many turkey hunters give up on a gobbler or avoid certain areas altogether due to hunting pressure. However, heavily pressured birds can be successfully hunted and tagged, but that requires a change in calling, approach, and setup. 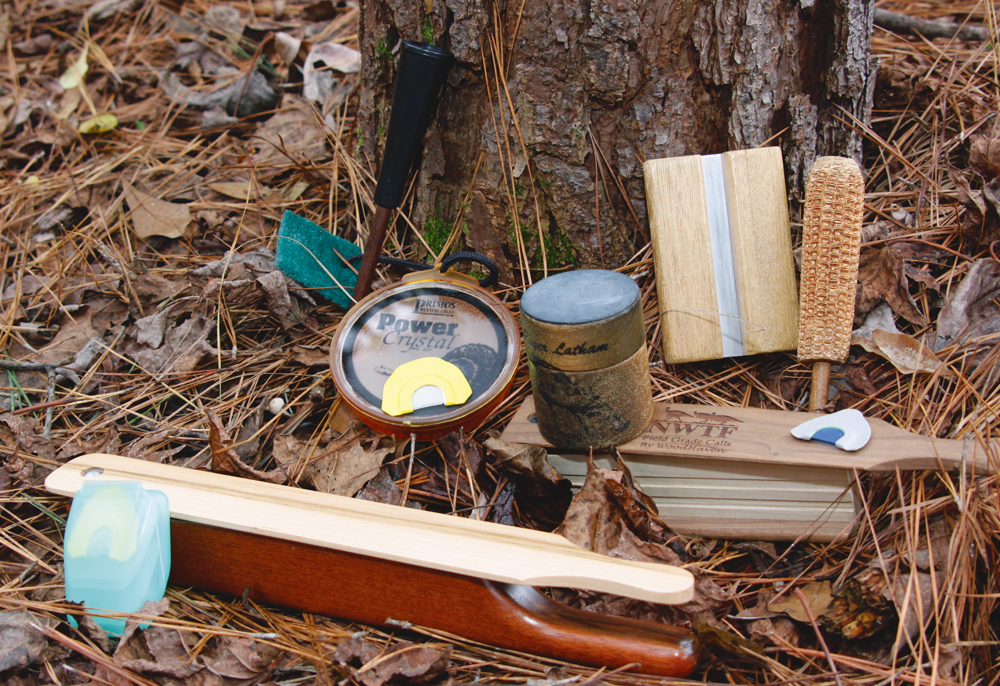 Use different types of callers on pressured turkeys. Photo by Charles Johnson

Tone Down Your Calling

Turkey hunters want a response from a gobbler. They either throw out some hen yelps to get old Tom to gobble or use some type of shock-gobble call. Owl hooters, pileated woodpeckers, crow and other types of calls are used by hunters to try to make a turkey gobble.

“Sometimes it is best not to make a call at all,” mentions Bob Phillips of Lincoln, Ala. “Turkeys that have been hunted a lot know that some calls are fake.”

Phillips added that while certain shock-type gobble calls will work in some situations, it is best to avoid them when hunting high-pressure birds. Many hunters will use some type of shock call and then a few minutes later begin yelping like a turkey. The gobbler knows that is not natural.

Some heavily pressured gobblers may only call a few times at daybreak. They will wait and listen for other sounds before flying down. Turkey hunters in earshot of the gobbler will throw out every call they can muster from their repertoire and at times increase their calling volume significantly.

Gobblers still alive at the midpoint of the season didn’t make it that far by being dumb. They have learned every fake call and how to avoid them. At this time, hunters need to make a change in calling tactics if they want to fill out a turkey tag.

“Most hunters call too much,” Phillips comments. “They also call too loud trying to get a bird to answer them. Instead, start with a few, low, soft yelps. That’s much better.” 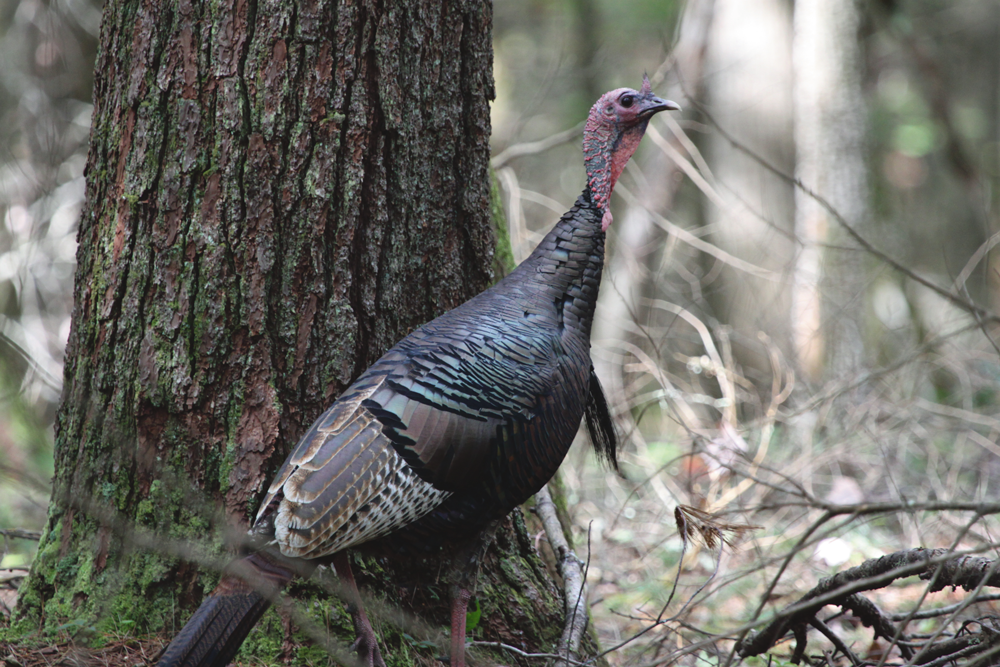 Several decades ago, turkey hunters could only choose from a few calls. Back then, only box calls, slates, and tube yelpers were available. Today, hunters can pick from a multitude of different call types available.

“Skilled callers can make most of the sounds a wild turkey makes with a mouth call.”

One call used primarily by turkey chasers in the spring is a mouth diaphragm. Hunters need to practice to become proficient callers with a mouth diaphragm. Skilled callers can make most of the sounds a wild turkey makes with a mouth call. However, the yelp and cackle are probably the most replicated by hunters. After a few weeks of hearing these calls, an old gobbler can quickly learn to distinguish these notes from calls made by a real hen.

“Turkeys called to with the same call over and over learn that it is not another bird,” Phillips comments. “Too much of the same calling will cause a turkey to hush up.”

Phillips says this silent treatment by gobblers is especially true where there is a lot of hunting pressure. A turkey hammered with the same calls over and over every day learns not to respond to that call.

Phillips recommends not using any type of turkey call when scouting for gobblers before the season begins. One thing hunters can do is let the bird and area rest for a few days. This may not be possible on public or hunting club lands. However, giving the gobbler a break is one change of tactics that can pay off down the road.

“Change up your calls,” Phillips advises. “Switch to a box, a slate or some other type of call you haven’t been using.”

Also, Phillips says to change the call rhythm or cadence. Hunters can become set in a calling routine and turkeys quickly learn this. Different calls will produce different tones. When hunting pressured birds, callers want to sound like a different turkey. This change may get the old gobbler to respond.

On some hunts, Phillips will use two calls at the same time, a mouth call and slate or glass used in tandem. With this method, the different tones or notes will make it sound like two or more different hens calling. According to Phillips, being proficient on a few different types of callers will increase your chances of getting a gobbler into shotgun range.

“I will usually yelp with a raspy mouth caller,” he explains. “Then I will purr or pit with the slate or glass call.”

From years of experience, Phillips knows that the gobbler dictates how much and how often a hunter should call. In the morning when the gobbler hits the ground, he gobbles a lot. That’s when the hunter needs to call a lot. Once the action gets close in, the caller needs to tone it down some.

Weather can affect the range and loudness of calls. On calm still mornings, sound travels farther. Therefore, the calling can be softer. On windy days and in trees with thick foliage, the sound from the calls won’t travel as far. However, keep in mind turkeys have excellent hearing. Calling too loud can spook a gobbler. 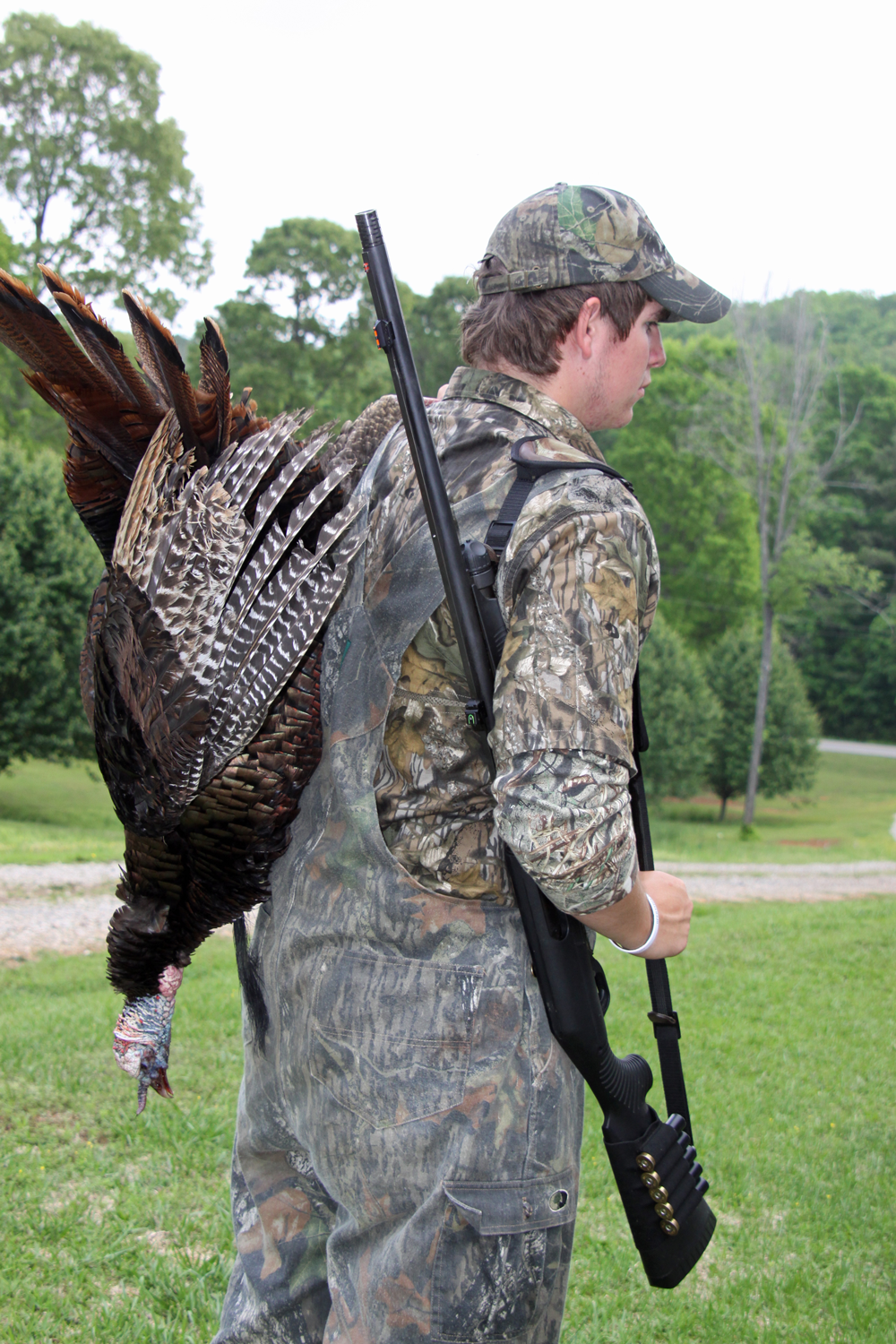 The end result from plenty of patience. Photo by Charles Johnson

Time for a Change in Approach

Turkey hunters can become creatures of habit. They walk the same trails, hunt in the same direction from their vehicles and approach the turkey from the same spots. These habits can also educate a gobbler to the presence of a hunter. After only a few hunting days of this repetition, a sly gobbler may change area codes.

“If you know a turkey has been hunted pretty hard, change your approach to that turkey,” Phillips mentions. “By approaching the turkey from a different direction, he is less likely to know he is being hunted.”

This technique may require a little more effort on part of the hunter. However, it will be worth it when you are carrying the bird out over your shoulder.

Decoys can be another option for high-pressured turkeys. Many decoys on the market today are very lifelike and can grab a gobbler’s attention. Turkeys approaching a decoy will still be cautious so call low and softly to avoid alerting the gobbler.

The decoys should be placed no farther than 20 to 30 yards out from the hunter. This helps the hunter judge the distance to the bird when the tom approaches the decoys. Sometimes a gobbler will circle and walk in from a different angle.

“I like to use a hen and a jake for decoys,” Phillips comments. “I want the head of the jake up high and the head as white as it can be. That old gobbler cannot stand for the jake’s head to be sticking up.”

Phillips explains that boss gobblers have an ego. They want the jake to bow down to the king. When an old tom sees an aggressive jake, he will come in closer. With this decoy setup, the gobbler’s attention is diverted away from the hunters.

Another tactic Phillips has used on some old birds is hunting in midday to afternoon hours. Where legal, this method can throw the gobbler completely off guard. A majority of turkey hunters only hunt the first few hours of the day. By midmorning, most hunters have already left the turkey woods.

Phillips says the turkeys may not gobble as much, but they can be more responsive at this time. By late morning, a gobbler may be searching for another hen. He is likely to answer with some course yelps or clucks. Hunters need to remain alert for the sound of an approaching gobbler.

“Hunt where you know there are turkeys,” Phillips explains. “The gobblers may be hushed mouth, but they are still in the area looking for a hen.”

Phillips says turkey hunting requires more patience than anything else and hunting pressured birds requires another dose of patience. Use your hunting skills and a change in tactics to put a high-pressured gobbler in your sights. The final outcome will have been a great day outdoors.