Some anglers and fishery managers may have thought that the  “Great Red Snapper Count (GRSC)”, a $10 million study of red snapper populations on the entire shelf of the Gulf of Mexico by more than 20 top marine scientists extending over two years, would bring an end to the bickering over red snapper seasons.

The study indicated that there are about 110 million red snapper over two years old on the continental shelf from Texas to the Florida Keys, which is more than three times the 36 million that had previously been estimated by federal fishery managers. 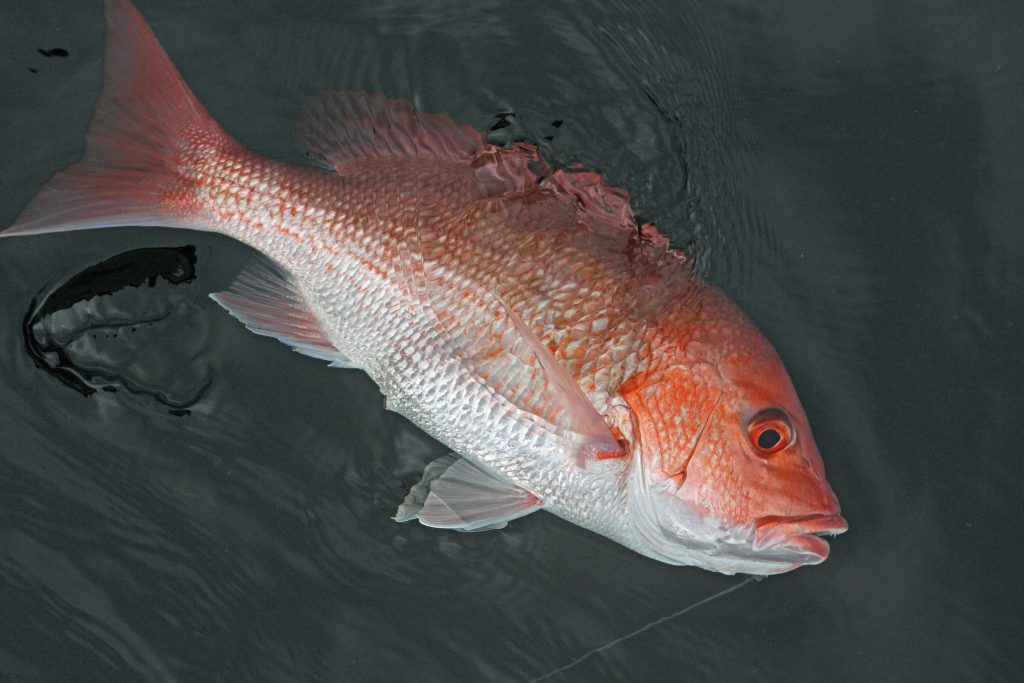 A just-released study indicates there may be more than three times as many red snapper in the Gulf as previously estimated, but so far federal fishery managers have not taken the new findings into account. (Photo Credit ADCNR)

Not so fast, my friend.

While the Gulf of Mexico Fishery Management Council has recommended to NOAA Fisheries to basically hold the line on red snapper size limits and harvests for the 2021 and 2022 fishing year, there’s trouble ahead, particularly for Alabama and Mississippi, if a process known as “calibration” goes forward.  Calibration will equalize the valuation of the new study with the old,and much maligned, federal method of estimating snapper abundance. 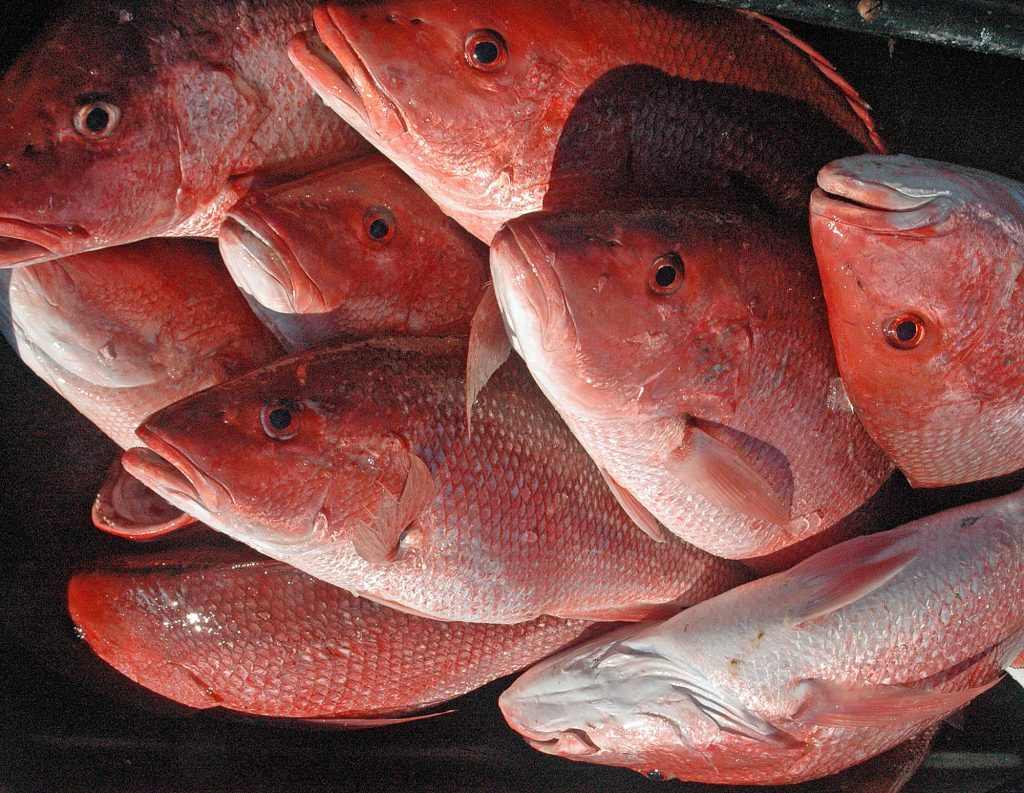 Red snapper are clearly abundant in the Gulf waters off Alabama and other Gulf states, but federal managers continue to manage the harvest very conservatively. (Photo Credit Alabama Department of Conservation and Natural Resources)

But first, the good news.

According to Scott Bannon, Alabama Department of Conservation and Natural Resources Director of Marine Resources, Alabama private fleet anglers and charter boats without federal permits can expect about the same Gulf snapper season they had last year.

The season will begin May 28 and continue Fridays through Mondays until the quota, expected to be about the same as last year, is reached. Anglers will be allowed two fish per day over 16 inches long, as last year. And everybody who knows the water is likely to catch plenty of keepers if wind and weather cooperate.

The bad news is with what the quota will be in the future. The Council voted to recommend NOAA Fisheries accept the states’ data to manage recreational harvest but the agency could refuse the recommendation in the coming weeks or months and require the states to calibrate their data beginning this year. 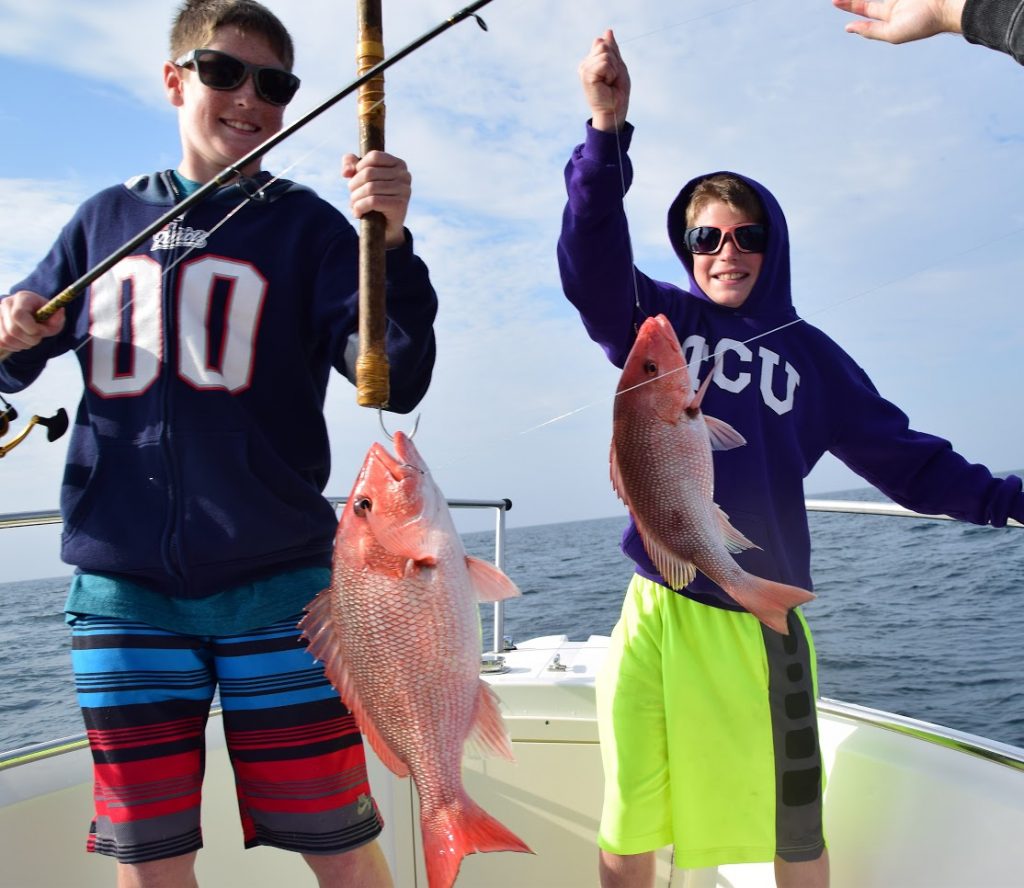 Red snapper are abundant both on artificial reefs and on natural structure—and surprisingly also on flat featureless bottom according to the new study. (Frank Sargeant)

Here’s what Scott Bannon, Director of Marine Resources for the Alabama Department of Conservation and Natural Resources, says on the matter:

But the committee then recommended that the acceptable biological catch (ABC) be set at 15.4 million pounds, which Bannon vigorously questioned, because the latter figure controls the allowable total harvest.

Discussions will continue, but ultimately the federal agency has the final say on the catch, and that could mean fewer fish for Gulf Coast anglers as well as lots less money for beachfront hotels, motels, restaurants and marinas, already staggered but starting to recover after a year of the pandemic.

Catch limits are allocated by states based on historical landings, so Florida gets 1.95 million pounds, Alabama 1.14 million pounds, even though Alabama has much better red snapper fishing than most parts of Florida’s Gulf Coast due to the massive presence of artificial reefs placed by government, conservation groups and private anglers. 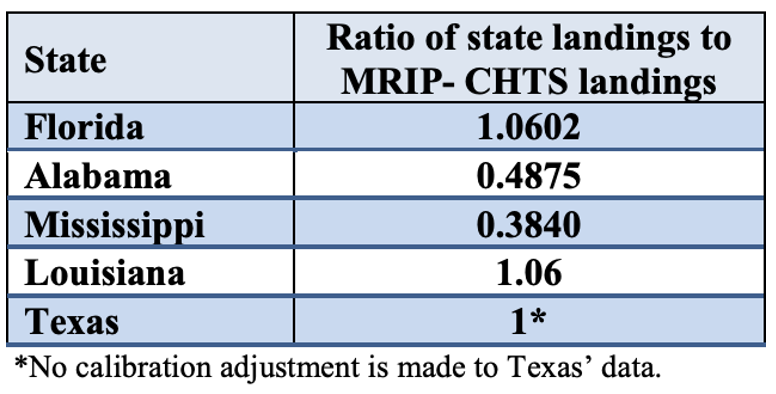 Alabama however, offered a plan using abundance information from its own fishery- independent surveys.  The surveys, begun in 2011, incorporate survey methods very similar to those used in the GRSC study.  Using the removal rate identified in latest federal red snapper stock assessments, Alabama calculated the number of pounds available for harvest from the abundance estimate.

NOAA Fisheries and representatives from each of the states’ fisheries agencies discussed methods to calculate the calibration of the two data sources and a simple ratio to convert state survey data to federal data was settled. The ratios are in the following table.

This would mean that while Florida, Louisiana and Texas see virtually no change in their allowable catch, Alabama and Mississippi anglers would get dramatically fewer fish via shorter seasons, at a time when not only the GRSC says there are lots of fish, but also angler experience confirms it.

“Our goal is to avoid calibration,” Bannon said. “With calibration, Alabama and Mississippi allocations would be cut in half.”

Alabama’s managers have argued that the federal assessment has significantly underestimated the amount of red snapper in the Gulf of Mexico, particularly off Alabama.  The GRSC and nearly a decade of fisheries independent survey work off Alabama confirms this is the case.

Under calibration alternatives, Alabama’s quota for red snapper could go from 1.12 million pounds in 2020 to 547,298 pounds in 2021. The cut is based on the MRIP, which indicated vast overharvest by both Alabama and Mississippi in 2019.

However, both states have been using a smartphone app to register fish caught immediately on the day they are landed, which they say is much more accurate than the archaic MRIP phone interview and mail system. 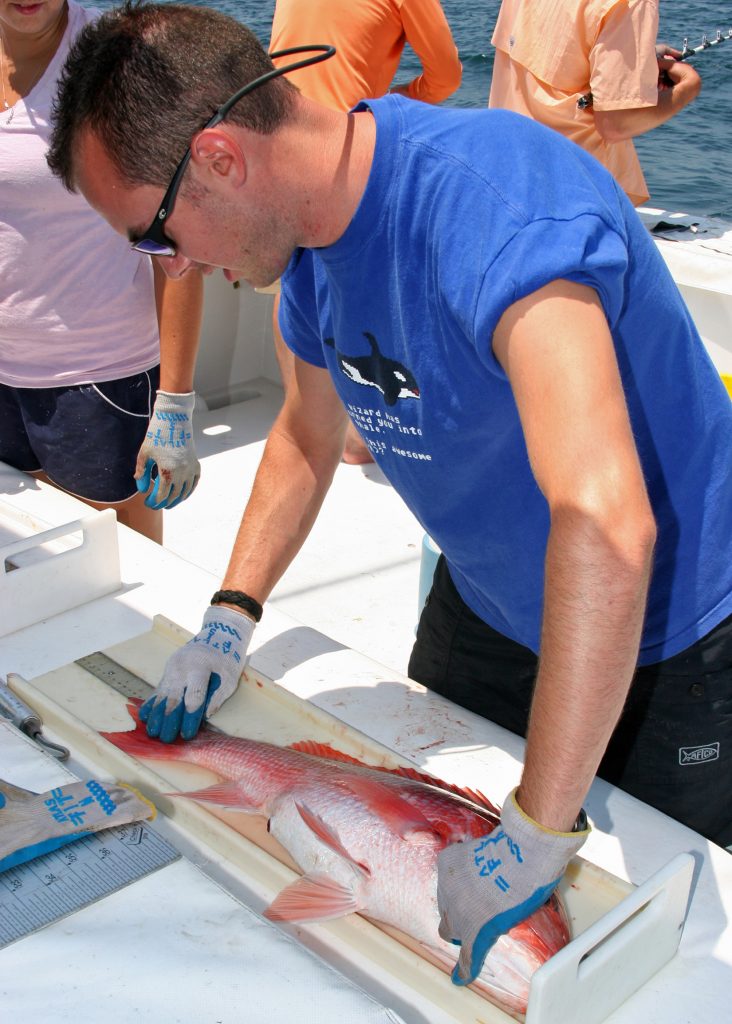 Alabama’s Marine Resources Division was among a number of state agencies assisting the the Great Red Snapper Count, which indicated a much larger snapper population in the Gulf than previously thought. (Photo Credit ADCNR)

“Naturally we didn’t agree with their number,” Bannon said. “NOAA Fisheries said that calibration was going to be required because the fishery may have met the overfishing limit in 2019. The catch for 2019 barely exceeded the 15.5 million-pound limit by 150,000 pounds. That is Gulf-wide in all sectors, including private anglers, for-hire and commercial, but with the new Great Red Snapper Count data, whether there was overfishing at all in 2019 is in question.”

To be sure, there’s reason to be conservative in management of a fishery so heavily subscribed as Gulf red snapper. There’s no question that fishing pressure can wipe out the fish in a given location in short order when a hot spot becomes widely-known. That’s why charter skippers guard their “numbers” so carefully.

And, modern fish-finding technology, including live imaging, side scan and forward scan sonar along with pinpoint GPS has made it much easier to find productive terrain than ever before.

Further, there are a lot more of us today who own offshore capable boats and have the gear and the know-how to get out there, find the fish and load them up.

It’s entirely conceivable that a too-liberal Gulf red snapper season could crash the snapper numbers on known structure, which includes just about all of it these days.

It has to be noted that the majority of the “new” fish uncovered by the Great Red Snapper Count were not on the ledges, reefs, oil rigs and artificial reefs where snapper anglers fish, but on flat sand and mud bottom scattered over hundreds of square miles. The huge schools seen on some reefs were not there. 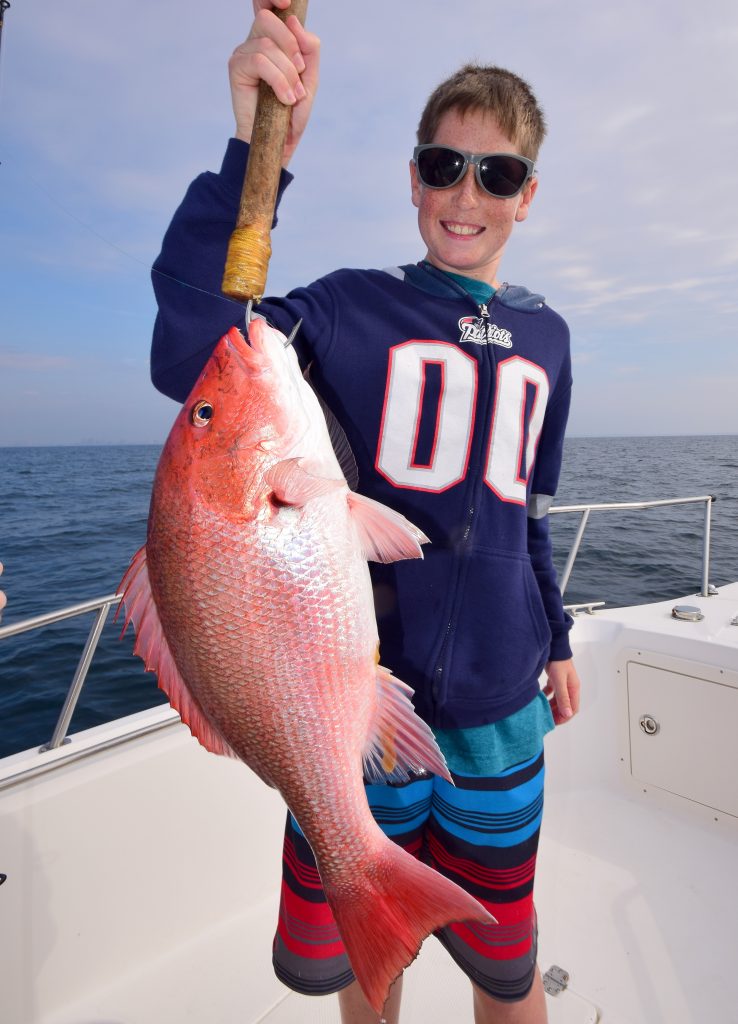 Snappers are easy to catch, even for young fishermen, and they’re one of the best table fish in saltwater. (Frank Sargeant)

So, even though there might still remain millions of snapper on the featureless mud and sand bottom of the gulf, anglers would see few on the spots where they concentrate and where fishing is highly productive.  If the harvest goes too high, the effect would be the same as if the population had crashed, and the finger would be pointed at the fishery managers for failing in their mission. The remaining fish would eventually repopulate the reefs but it might take a while and it would probably require scaling back harvest, so there’s reason to manage with care.

But also with balance

Bottom line is, let’s hope for further confirming evidence that there are a whole lot more red snapper in the Gulf than the feds have so far been willing to believe, that the state methods of counting harvest are accepted, and that they’ll take that into account before red snapper season in the Gulf of Mexico 2023 rolls around.