Take a very fast, very aggressive and very hard-pulling game fish. Put this fish in an attractive physical form. Then add this fish to several hundred like it. What do we have? Spanish mackerel, of course!

Spanish mackerel don’t get very big. A five-pounder is a big one. They typically run from little “keychain” fish of a pound or less to three pounds. What they lack in size, though, they make up in sheer numbers. Spanish almost always run in schools by the   hundreds.

Spanish are long, slender fish, silver in base color with their topsides a greenish-blue color and golden-yellow spots on their sides. The dorsal fin is a very dark grey or black, and this “pirate flag” top fin is a good way to positively identify a Spanish mackerel. Other closely related members of the mackerel family that occur here in the northern Gulf don’t have this black top fin. 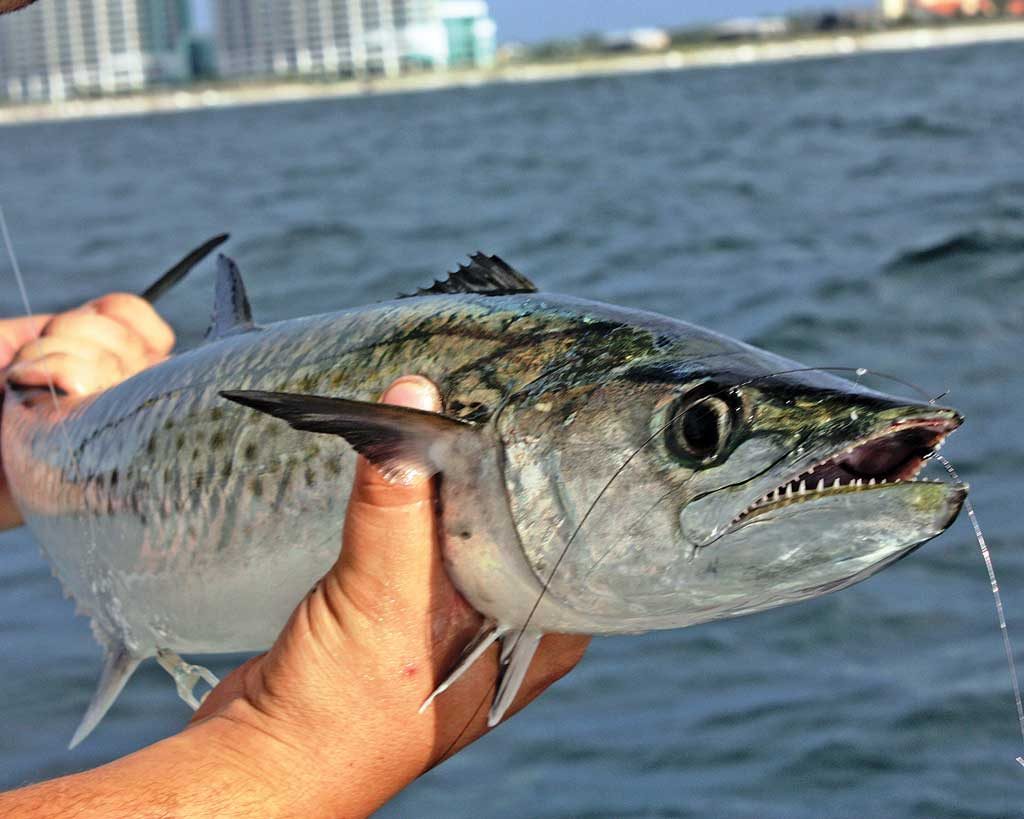 Is it a big Spanish or a juvie king mackerel? It has spots. No, it’s a young king. Photos by Ed Mashburn

Spanish mackerel are very attractive fish, and they look even better when they are firmly hooked on the end of my line. Of course, keeping a Spanish hooked can be a bit of trouble. Spanish come equipped with a mouthful of some of the sharpest teeth to be found anywhere.

Spanish are “tourist season” fish. They only appear when the water temperatures are 70 degrees or above, so don’t expect to see them in our Alabama waters at Christmas time.  From April to early November is Spanish season.

How to catch them—rig properly

When hooked on standard king mackerel gear or other heavy equipment, Spanish just can’t give a good account of themselves. For some really hot fun, anglers should look to lighter gear.

A spinning or baitcasting rig with 15 pound test line is perfect. In fact, 12 pound test is even better.

Spanish like to eat any kind of lure that looks like a minnow and is moved through the water very fast. I believe it’s impossible to move a lure too fast for Spanish. They like lures traveling at warp speed. Small spoons, jigs, and the classic Gotcha lure are all Spanish killers, but for the most reliable results, it’s hard to beat a small live cigar minnow rigged on a down-sized stinger rig.

Whatever bait or lure is chosen, the crucial part of the rig is the leader. Spanish have very sharp teeth, and even heavy monofilament leaders will be cut.

For a real blast with a bunch of hungry Spanish, anglers should try the old “MacDonald’s Straw Lure,” otherwise known as a bubble rig. This rig is simple. It consists of a clear plastic float that is filled with water and tied about two feet above a leader with a two-inch section of plastic drinking straw threaded over the leader. To the end of the line is tied a small gold treble hook. The clear plastic float filled with water allows extremely long casts, and the whole rig is retrieved across the top of the water as fast as it can possibly be moved. It sounds impossible to anyone who has never tried this, but it’s an absolutely deadly rig for Spanish. They can’t resist clashing the star lure as it flashes past them. The plastic straw also helps protect the leader from the razor-sharp teeth of the mackerel. Anglers can either make a bubble rig themselves or buy them ready-made at most coast bait and tackle shops.

Whatever bait or lure is chosen, the crucial part of the rig is the leader. Spanish have very sharp teeth, and even heavy monofilament leaders will be cut. A short six or eight inches is plenty long—light steel leader is needed in most cases. The problem with this steel leader?  Spanish have very good eyesight, and they can get very leader-shy on some days.  Even the thinnest wire can spook Spanish some days when the Gulf is especially clear.
When the Spanish are leader-shy, anglers may have to go to monofilament leader to get strikes, but they need to be resolved to lose some tackle. Spanish will take their share of lures and baits.

For maximum fun, anglers who can throw a fly rod can catch Spanish, and they are an absolute blast on a long rod. An 8 weight fly rod is plenty, and even a 5 weight is adequate for most Gulf Coast Spanish. Any sinking fly that looks like a minnow will catch Spanish. Clousers in white, silver and chartreuse have been very effective for me. As with spinning and casting gear, fly-casters will need to have a short bite leader of wire to prevent bite-offs. Tyger Leader is a good leader for fly fishing. It can be tied to the lure and the monofilament leader and doesn’t have to be twisted as most wire leader material.

Regardless of what kind of lightweight tackle is used, a bite-proof leader is necessary to catch Spanish.

Where to catch them

One of the best things about Spanish mackerel is where they can be found and caught.  How about everywhere? Just about any place an angler can get to saltwater on the Alabama Coast, Spanish will be there.

Many Spanish are caught from the Fairhope Pier in summertime. They make it as far up the Bay as the battleship in summer, also.  Spanish are very common in Grand Bay, on the western reaches of the Mobile Bay system.

However, for the very best Spanish mackerel fishing, it’s hard to beat the Gulf itself.  Thousands of are caught each year from the Gulf Shores State Park Pier. Small boat anglers who stay within sight of the beaches and condos of Alabama catch tons of Spanish.

Even beach anglers catch lots of them. Just keep an eye open for signs of feeding fish, cast a lure into the feeding frenzy, and bring it back fast. If Spanish are there, they’ll hit.

One of the most reliable ways to find Spanish mackerel is to watch for flocks of feeding birds. When the seabirds start to dive into the water after baitfish, it’s best to assume Spanish mackerel are under the birds.

Spanish are one of the most commonly-found game fish on the Gulf. They are truly a “tourist” fish.

How to prepare them for the table

Spanish mackerel complement everything. They are pretty to look at, loads of fun to catch, and very good on the table. Spanish can be prepared in just about any way, but there are a few things to do that help ensure best eating results.

First, when filleting Spanish, make sure to get all the skin off the fillets. This can be hard, because Spanish mackerel have tender and easily-torn skin.  The skin can give a strong taste to its mild and delicious meat.

Also, when filleting Spanish, be sure and remove the dark line of meat that runs along the lateral line of the fish. This dark meat can give a strong flavor. Other than these two cautions, Spanish is one of the best-eating fish in the Gulf.

My favorite ways to cook Spanish? I like to sauté my Spanish mackerel fillets in butter.  Just a little pepper and salt for seasoning, and a touch of Tony’s for flavor, and that’s it.  When the flesh turns opaque and firm, it’s ready for the plate.

My other favorite way to cook Spanish is to grill them over a low fire. I rub the fillets with olive oil, dust on a little black pepper, and put them to the fire. By the way, I use a grill skillet with all of my fish fillets. This light metal skillet with holes in the bottom to let in heat and smoke keeps the tender fish from falling apart and dropping down into the grill fire as it is turned while cooking. 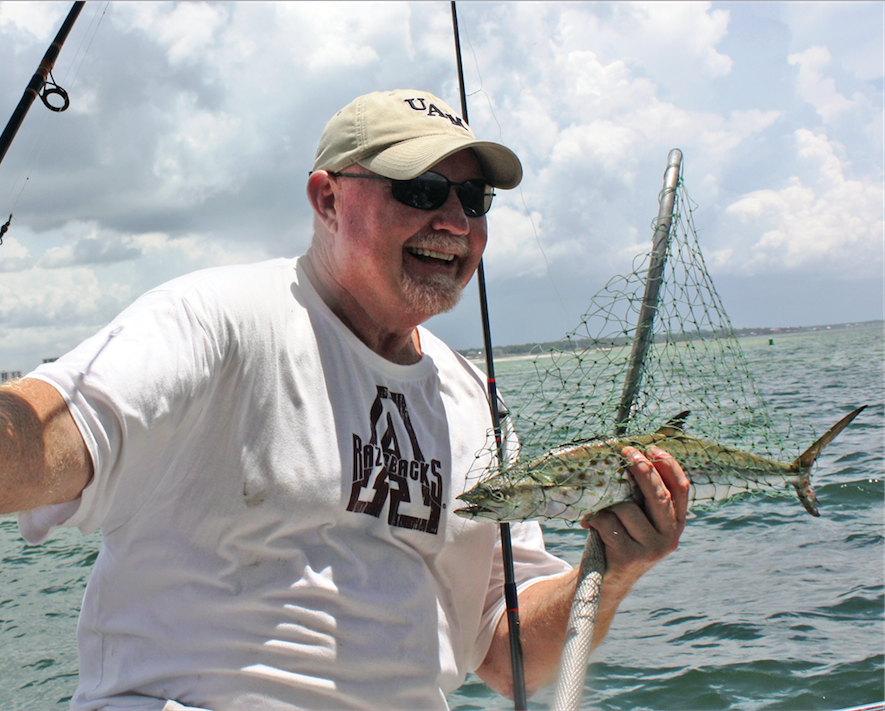 Even little Spanish are great fun on a fly rod. Photo by Ed Mashburn

Is it a Big Spanish or Small King?

Let’s look at the laws regarding king mackerel size. Kings must be 24 inches long from nose to fork to be legally kept. Anglers can keep two kings each. Spanish don’t have a minimum length in Alabama waters, and anglers can keep fifteen of them. The problem comes when we catch a fish that is either a really big Spanish or a juvenile king. These fish look very much alike when they’re both about 20 inches long. However, if we keep an undersized king, it could get very expensive if the Game and Fish folks check us at the dock.

So, how to tell the difference so we can let that baby king go and keep the trophy Spanish? The most reliable way is to look at the dorsal fin. If the fish in question is a Spanish, it will have a black or nearly black dorsal fin. A baby king’s dorsal will be lighter in color—a light grey or greenish-colored fin.

Also, the lateral line in MOST kings takes a decided dip toward the belly of the fish about halfway down the fish’s side. However, this lateral line dip is not totally reliable. A few kings don’t have this dip, and this can lead to confusion in the two species, which, as we said before, can be expensive if we’re found to have an undersize king in our ice chest.

For both coastal residents and visiting tourists, July is one of the very best months to catch some of these mini-rockets of the Gulf waters. Grab a light rod and reel, put on a shiny lure that can be cast a long way, and start casting. It’s almost a sure bet that in only a little while, that rapidly-retrieved lure will be intercepted by a toothy little killer with golden spots and a pirate’s flag on top. That’s when the fun begins. 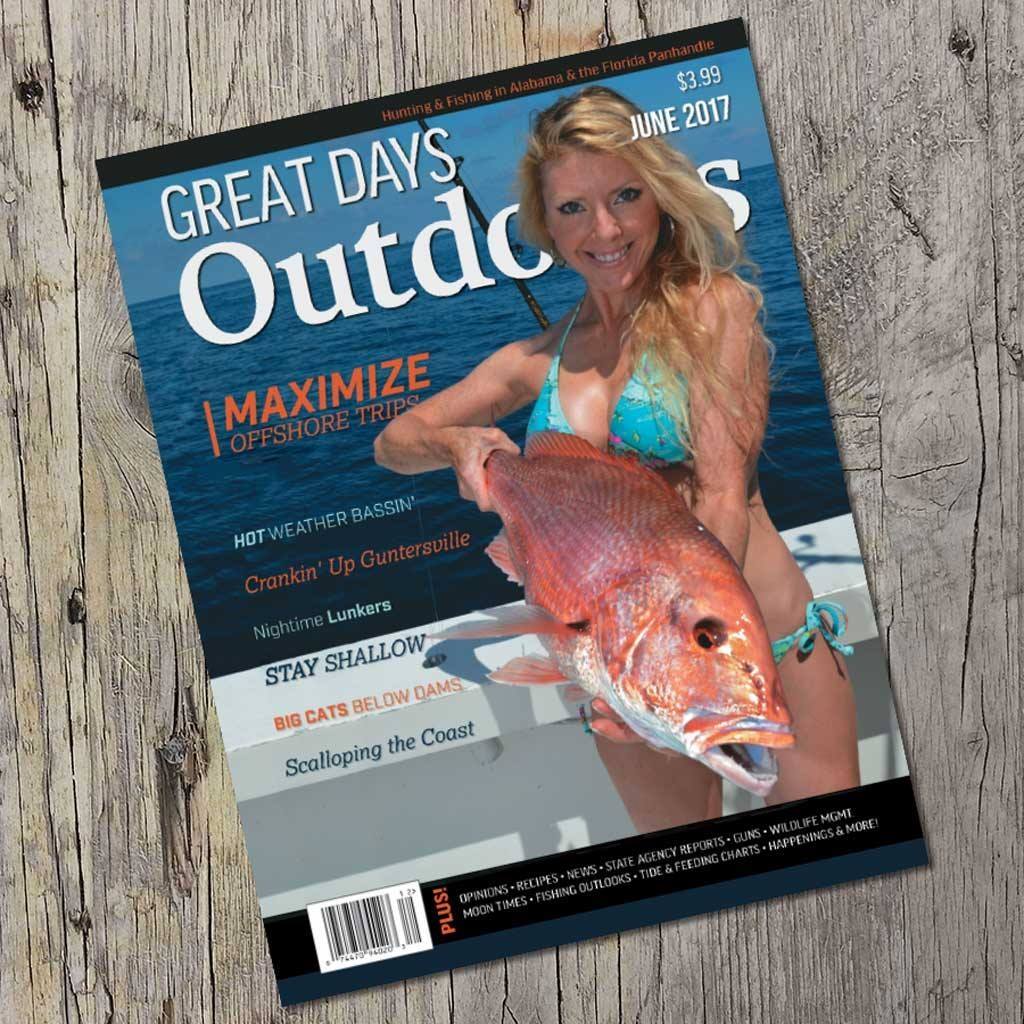 This article originally appeared in the print edition of Great Days Outdoors magazine in June 2012. For more great hunting and fishing content for the deep South, subscribe to Great Days Outdoors print and digital editions or click the image to download this issue.