Some of the biggest game fish can be found below the massive dams of lakes.

Clear, powerful water swirled and rolled at the foot of the massive dam that stretched from one side of the Tennessee River to the other side.

The water swirled in boat-lifting humps, and the guide in the back of the boat had to work with the motor to hold the boat’s position in the strong current. I was a bit unsure of things as I sat in the front seat of the fishing boat.

For a first-timer, this tailrace fishing below Wheeler Dam in northwest Alabama was a pretty intimidating scene. Gulls screamed overhead, the water roared and whirlpooled, and the operating noises of the dam created very intense surroundings.

The guide yelled,” Okay, now! Cast into the seam between the main currents. Let the bait sink and then hold on!”

When I lobbed my shad-minnow bait into the relatively quieter water where two powerful currents met and cancelled each other out, I didn’t quite know what to expect. I learned very quickly why people travel long distances for tailrace fishing Alabama’s big dams.

My rod tip was rudely jerked down toward the swirling water, and something powerful decided that it wanted to be away from the dam and away from whatever was pulling it upward.

“Catching this ten-pound striper was a great way to start the day.”

The guide yelled, “Hold on! He’s going downstream. We need to follow him.”

With great skill the guide controlled the boat’s drift in the powerful current. In a short while, a big silver-sided, black-striped fish was soaking me with powerful thrusts of its tail at boatside.

Catching this ten-pound striper was a great way to start the day. 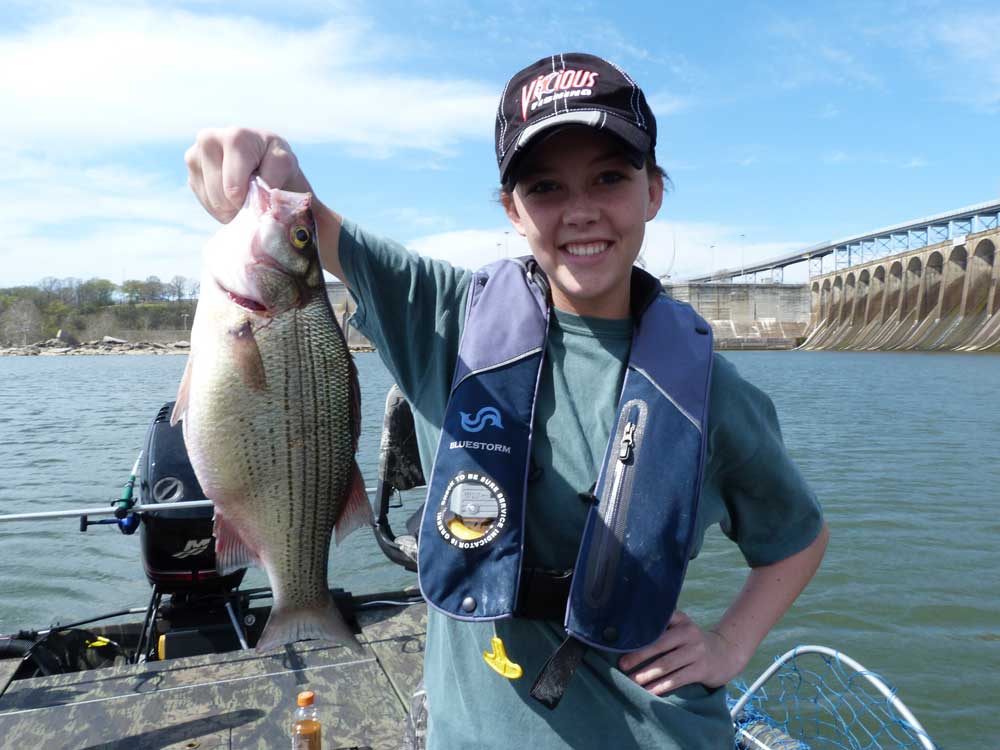 The guide unhooked and released the gorgeous striper after a few photos. Then he said, “Now, let’s go back up to the dam and find some smallmouth bass to catch.”

Since smallmouth bass just happen to be my favorite freshwater fish, I didn’t argue one bit.

By the way, we did find the smallmouths below the dam, and we had a ball catching those bronze-backed fish that pull so hard in the strong currents.

At any time of the year, fishing boats of various kinds and widely different sizes can be found just below the huge concrete dams that create Alabama’s massive impoundments. From sweltering summer to frigid cold winter, folks motor up to the dams and then fish the powerful water coming through the dams.

There has to be a good reason for this constant occupation of the water just below the big dams.

The reason folks fish the tailrace waters so faithfully is simple: fish are there, and the fish almost always bite.

Captain Brian Barton has fished the strong waters below Wheeler Dam and Wilson Dam for many years. And since he has the credentials, I chose him to help us understand why great fishing is found in tailrace waters of these dams.

How is Tailrace Fishing Done?

Captain Brian tells us that because of the faster currents in tailrace fishing, fish hit more aggressively and more often.

This makes them, in fact, easier to catch. His experience has shown that fish in the tailrace aren’t affected by cold fronts and other weather conditions like fish in the main lake.

Another big advantage of tailrace fishing below the big dams is less fishing pressure on the bass and stripers which gather there. These fine, strong fish will often locate behind rocks and the swift currents around the rocks that many anglers are not willing to navigate.

“A striper or smallmouth strike in the tailrace is often violent,” says Captain Brian. “When your bait or lure is drifting at a fast speed, a fish doesn’t have a lot of time to think about it. It’s often a reaction strike. This makes the hook-up percentage on bites in the tailwaters a lot higher.”

Captain Brian advises, “My best advice to folks who want to try the strong currents below the big dams is to be patient. Learning to read currents, how to position your boat, and how to control your boat is a very difficult task. I’ve been drifting tailraces for catfish, bass and stripers for more than thirty years. I still plan on breaking off twenty or thirty hooks in a day’s fishing while drifting shad.

“Many folks say there is no skill in drifting live bait. I beg to differ. Fishing live bait while avoiding hang-ups below dams is without a doubt one of the most difficult types of fishing there is. However, for those with the patience and dedication to learn, the rewards are a bountiful fish population just waiting to be caught.” 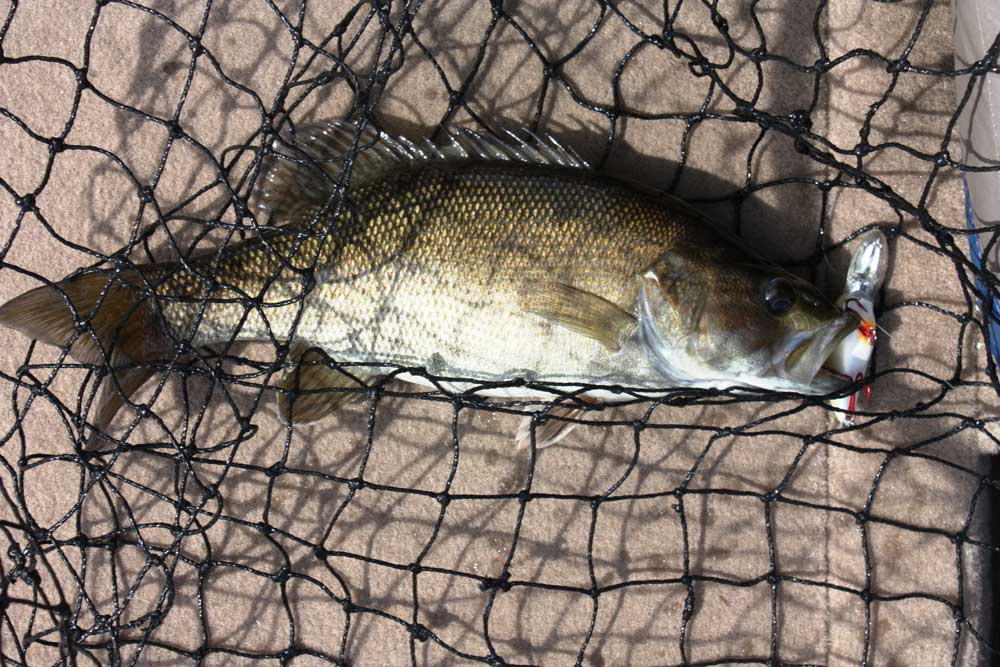 When is the Best Time?

Of course, the best time to go tailrace fishing is whenever you can, but there are some times during the year that anglers have better success below the dams when fishing for these hard-pulling fish.

“At certain times of the year, you have greater concentrations of fish in the tailrace waters, which means greater numbers of fish to catch,” says Captain Brian.

He continues, “For smallmouth, early spring and early fall bring the largest concentrations of fish. In spring, it’s the upstream migration to spawn that concentrates the fish below the dam. The fish will seek out pea gravel or other hard bottoms just outside the main current flow for spawning.

“In the fall, it’s the large concentration of yearling shad minnows that brings bass to the dams. In September and October, the fish forage themselves on the shad minnows in order to build body fat for the upcoming winter.”

When it comes to those big striper super-hard pullers, Captain Brian tells us that he finds the largest number of stripers in the tailrace in the middle of summer and again in fall.  Stripers always search out the coldest water in the lake in summer, and the turbulent waters below dams are most often where the coolest and most oxygenated waters are found.

In the fall, stripers are gorging on shad just like the smallmouths do.

What Kind of Equipment is Needed?

For both smallmouth and striper fishing below the dams, lure and bait selection is not complicated.

For anglers who prefer artificial lures, it’s hard to beat large swim baits like Mister Twister’s Sassy Shad. White pearl with a blue back and white pearl with black back have done very well for Captain Brian Barton through the years.

“In cold water, a Mister Twister Striper Lightin’ jig in a 1-oz model is best,” Captain Brian adds. “Throw the jig upstream and bounce it along the bottom back down the seam between two currents.”

He gets excited when he talks about live-bait fishing in the tailrace waters.

For line in the tailrace situation, anglers can sometimes go fairly light. Captain Brian uses 10-lb line when drifting and 12-lb test when anchored. With this light line, anglers have to keep a loose drag for when a big fish is hooked.

When fishing while drifting, the light line is not a problem unless the fish makes a run upstream. Sometimes an angler has to crank up the motor and play chase.

For rod and reel selection, Captain Brian tells us, “I use a B‘n’M seven-foot medium action Silver Cat rod. I use spinning rods when drifting and bait casting when anchored. These rods are marketed for catfish, but they make great striper rods, too. I spool with 10- or 12-lb Vicious mono. I like the Hi Vis Yellow for drifting so I can detect strikes or if the line begins to tighten due to a snag, I can see it in time to “pop” the rod before my hook and sinker become lodged between the rocks.”

How Big are Tailrace Stripers and Smallmouth Bass?

Anglers need to keep in mind that the former world-record smallmouth bass came from below Wheeler Dam. Some real champions are to be found swimming below Alabama’s big dams.

“The great thing about tailrace fishing is the concentrations of fish. When the fish are there and feeding, you can catch numbers in a hurry.”

“My largest striper in the tailrace is about 20 pounds,” Captain Brian Barton says, “but I have had clients catch fish in the upper 20s. My son, Andrew, caught a six-pound, 13-ounce smallmouth in March of 2014 below Wilson Dam. The average tailrace striper where I fish will average 10 to 15 pounds. Smallmouth will run 2.5 to 4 pounds.”

He adds, “The great thing about tailrace fishing is the concentrations of fish. When the fish are there and feeding, you can catch numbers in a hurry.”

Because of the forage below the dam—mainly shad—both smallmouth bass and stripers will be in the same places below the dams and eating the same thing, so anglers will never be completely sure what kind of hard-puller will be on the line next.

It becomes obvious when first looking at any of the big Alabama tailrace waters; these are some big, powerful streams which deserve respect.

Both Wheeler and Wilson Dams in particular have lots of boulders, logs, and other underwater structures that create both fish-holding conditions and navigational hazards. These waters are not places for a first-time boater to attempt.

When the dams are releasing water at full capacity, it can be hard to maintain a good drift and keep safe control of the boat. Anglers must be alert to not only the fishing, but also other boats, power transmission towers, and other structures in the water.

Anglers need to be aware that water conditions can and will change drastically in a very short time when water is released.

When the warning horn blows, anglers who are anchored should be ready to pull anchor and reposition very quickly if necessary.

Captain Brian says with emphasis, “Anglers should always wear a life vest and proceed with caution around dams.”

With a little patience to learn the waters and how different current conditions affect tailrace fishing, and some care and vigilance when fishing these powerful waters, Alabama anglers can find some of the best fishing in the world below the dams.

The tailrace waters below Alabama’s dams are sure to produce some truly great days outdoors.