On this fine June morning, something big and mean is treating me badly. This something big and very fast decided that my cigar minnow, which I had been slowly trolling behind my boat, was just the thing it wanted for breakfast.

Without any warning, my rod bent over. My reel made a painful sounding noise and my line smoked off my reel at an alarming rate. No doubt about it, I was connected to a pretty rude and powerful adversary and I loved every minute of it.

Trolling for big king mackerel, which have returned to their summertime feeding grounds off the coast of Alabama, is a tradition here in the Deep South. Anglers have been catching and having fun for a long time by simply pulling live baits or artificial lures behind their boats. However, like most things in the fishing world, trolling for kings can be improved in most cases by listening to a little advice from experts. 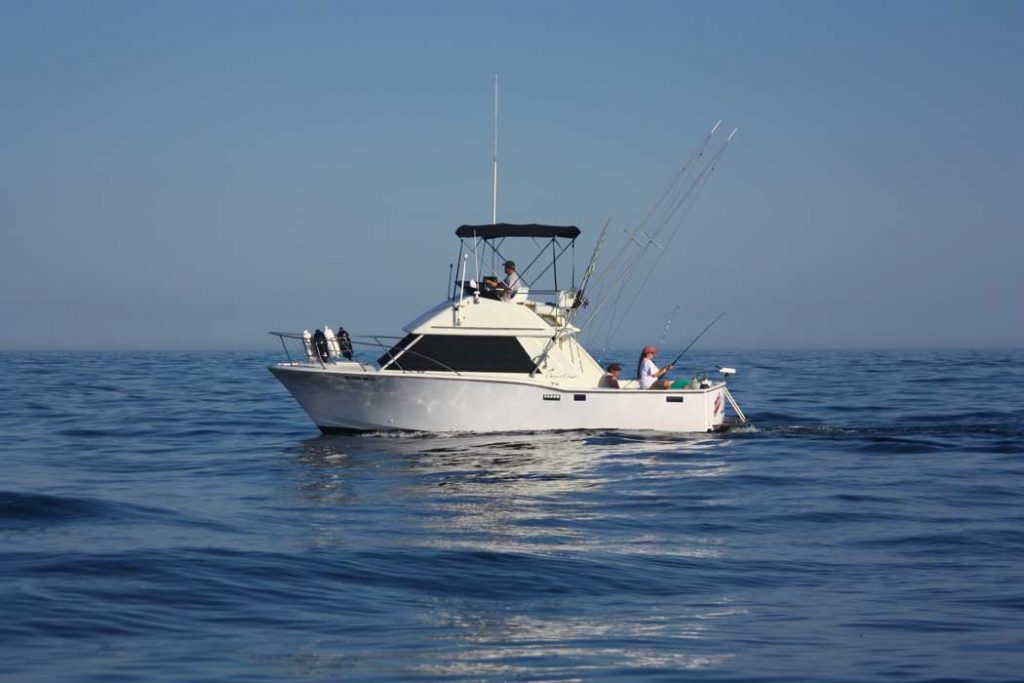 Capt. Troy Frady of Distraction Family Fishing Charters catches a lot of kings every season by trolling. He gives us the benefit of his many years of experience.

“Generally, the best trolling for kings will occur from mid-June all the way into October.” — Capt. Troy Frady

Captain Troy says, “The biggest thing here is the water temperature. We look for 70-degree surface water temperature. That’s the time we start trolling. The warmer it gets, the better. There’s no particular water clarity that we need when looking for kings. Generally, the closer to Pensacola we go, the clearer the water gets, but that’s not always the best for fishing. When the muddy water from heavy spring rains that empty out from Mobile Bay starts to clear up, it’s better. The fresh water tends to disperse the bait. Generally, the best trolling for kings will occur from mid-June all the way into October.”

Captain Troy pulls a combination of planer boards on his big boat to get baits down to deeper fish. At the same time, he pulls a flat line that presents bait to kings near the surface. Quite often, the largest kings take the shallow flat line.

He says, “Our trolling speed depends on the size of the planers we’re using. If we are using Number 1 or 2 planers, we’ll go as fast as seven knots, but we usually pull at five to six knots. We will slow-troll over reefs. We’ll use a 10- or 12-ounce lead with a three-way swivel with live bait. Cigar minnows are good. We’ll use stinger rigs.”

Captain Troy advises anglers who are new to the king mackerel trolling game to take a charter trip with a captain who does this kind of fishing every day. Watch how the baits are rigged. Look at the gear being used. Observe how the lines are presented. Ask questions and take notes. It’s easier to learn about the king mackerel trolling game by watching how experts do it. 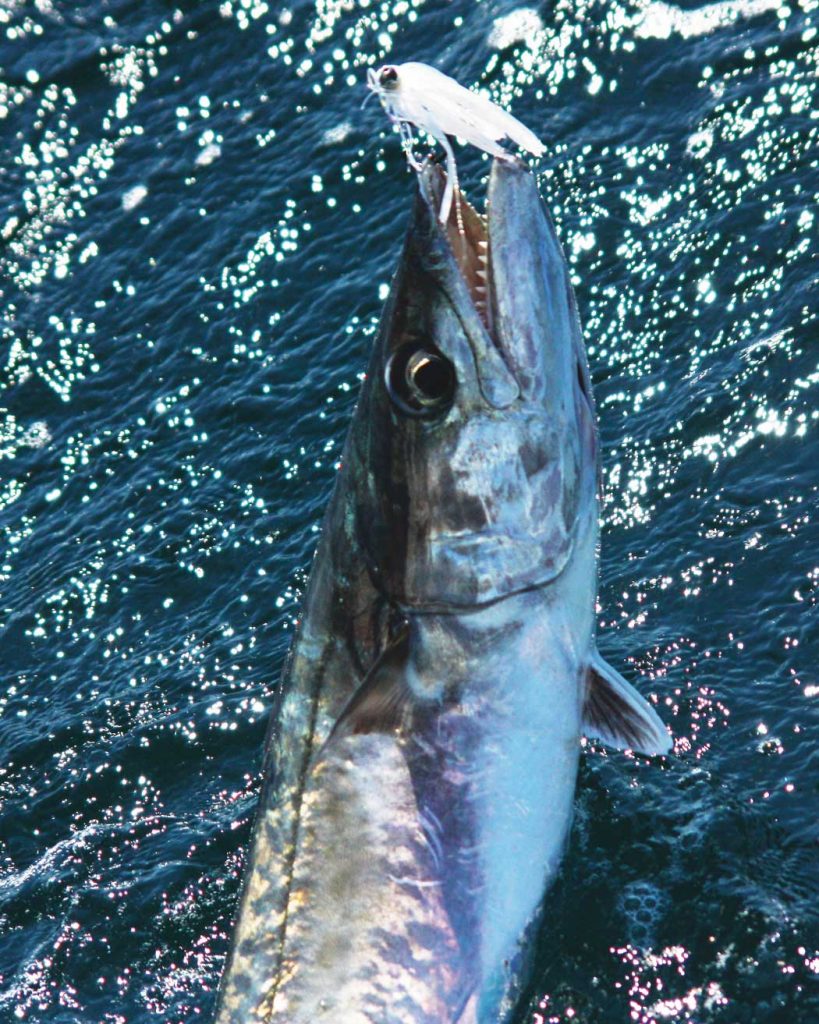 One of the best things about trolling for kings off the Alabama beaches is that small private boats are great platforms for catching these high-speed battlers. It doesn’t take a long-range run or super-heavy gear to catch some wonderful kings, but it does take some slow-speed patience.

Small boats are very effective at slow trolling for kings. This highly effective technique works just as it sounds. Go slowly. The boat should be moving forward just fast enough to move the baits and keep the lines apart. One to two knots is fine. It’s not even necessary to keep moving at all times. Some massive king mackerel strikes come when a trolled live bait, which has been allowed to sink as the boat is stopped, suddenly moves when the boat is put into gear and the movement is started again.

A couple of lines deployed from a small boat when slow trolling is just about right. A 2- or 3-hook stinger rig with a duster in pink, silver or purple colors with a frozen or live cigar minnow is the classic king mackerel offering in Alabama. Put one flat line out about 50 feet and let the second flat line out perhaps 100 feet. Put the rods in corner holders. Then just bump the boat in and out of gear to keep the baits apart and moving very slowly. There will be absolutely no doubt when a king takes the bait.

Using only two lines out from a smaller boat is much easier to keep them straight and untangled. Quite often, when a king strikes a bait on one line, another one will strike the second bait. Two angry hooked kings give plenty of action for most anglers and crew.

Slow trolling gear can be either spinning or conventional gear, whichever the angler prefers. The one thing that must be present is a reel that holds at least 250 yards of 20- to 25-pound test line. The reel drag must be smooth and not sticky at all. When a big smoker king hits, the drag must allow the fish to run under gentle pressure. A too tight drag setting or a drag that sticks will absolutely pull the hooks from the fish or break the line. The drag can be tightened down to fight the fish back to the boat when it has finished that first smoking fast run.

A small boat equipped with a good modern sonar unit is a very effective king mackerel catching device. While trolling, keep an eye on the screen. When balls of bait show up, get ready. The kings will not be far away. Also, look for bottom structure while trolling a mile or so off the coast of Alabama. Bait tends to cluster around the bottom stuff and the kings will be where the bait is. 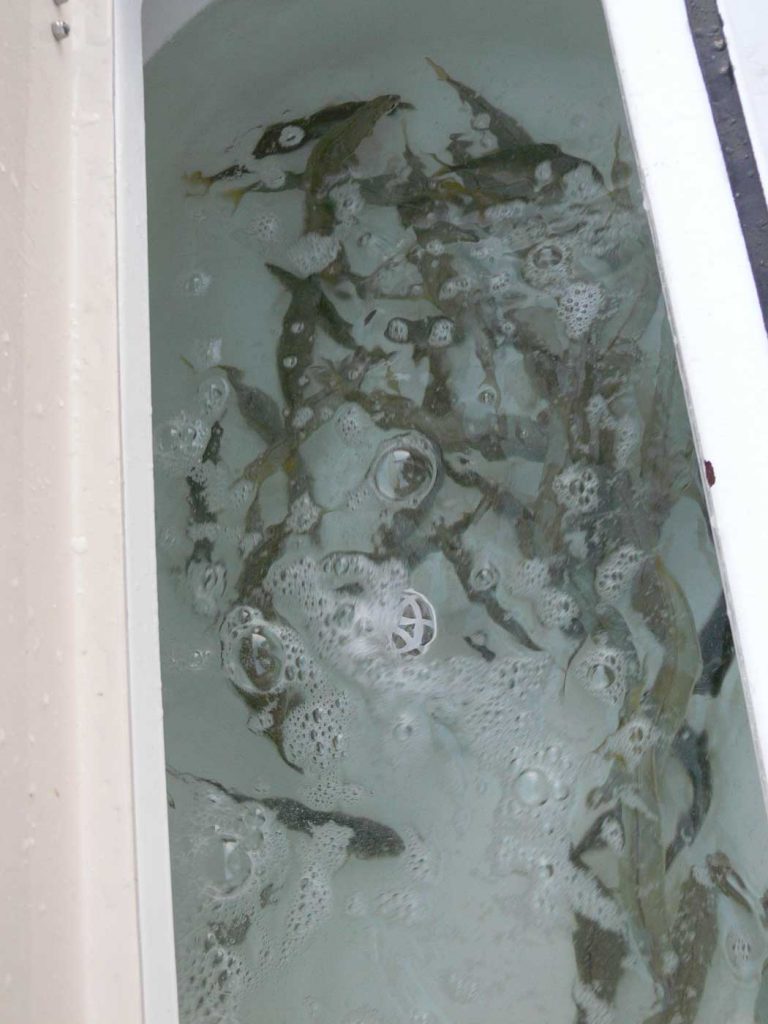 For Something Totally Different

Recently, many anglers on the Gulf Coast of Alabama have discovered that fishing for big fish like king mackerel from a kayak is a whole lot of fun. Since kings are often found well short of a mile offshore, they are within paddling range of most kayakers. On nice, suitable days, kayak anglers can launch off the beach anywhere in Alabama and be in great king fishing water very quickly.

“Kayak anglers need to be prepared to go on a ‘sleigh ride’ when a big king runs. It’s actually a lot of fun to be pulled around by a big fish.”

A kayak is a very effective form of craft for trolling for king mackerel. Quite often, kings don’t want their bait trolled at a high rate of speed. In fact, sometimes, the slower the speed, the more effective the trolling is for kings. Kayaks can be used to slow troll artificial lures, but live bait is generally better suited for paddlers.

Most anglers can paddle or pedal their kayaks at a speed of one and half miles per hour all day without becoming overly tired, and this speed is perfect for kings.

Kayak anglers can drop back a line with a live or frozen cigar minnow on a double-hook stinger rig leader and simply paddle around offshore and see what happens. Most days, kings won’t make kayak anglers wait long for results. When a big king takes a bait trolled by a kayaker, amazing things start to happen fast.

The most important thing for a kayak-trolling angler to keep in mind when fishing for kings is to a proper drag set. Keep the reel drag very light, just enough to hold the line without slipping as the bait is trolled.

Also, kayak anglers need to be prepared to go on a “sleigh ride” when a big king runs. It’s actually a lot of fun to be pulled around by a big fish. Since kings don’t usually have a lot of endurance, the ride won’t last too long.

Slow trolling in a kayak is a very effective and very amusing way to catch some large kings, but kayak anglers will want to make sure to keep handy a good pair of long-nosed pliers to help remove hooks from the toothy predators. You don’t want to try to remove hooks from a big king barehanded. There’s a high probability for angler pain in this situation.