Wild Hog Hunting: How to Hunt Hogs at Night

As the sun dips below the Alabama horizon, most people are getting ready for bedtime. However, for those ready to engage in some wild hog hunting, the day is just beginning. Running through the checklist: the AR15 magazines are topped off, night vision and thermal optics are cleaned, actions are lubricated, batteries are charged, and the truck door hinges are greased. These are just some of the tasks on the preparation checklist that will ensure success when wild hog hunting at night.

“There’s no room for Peter Pan on this hunt.” Sure there can and will be fun and laughter, but the level of tradecraft and concentration needs to be on par. The little things you must pay attention to when feral hog hunting can be the difference in loading up the truck or coming home to a disappointed dog with no scraps to chew on.

The more wild hog hunting you do, the more it will become a pastime that will mold itself into a tradition. You will most likely see hunting buddies come and go. Schedules get in the way. But the routine will remain. The addiction will build.

2030 Hours…You begin that slow drive to the local gas stop. You gas up and walk out with a piping hot cup of truck stop coffee. It is not the best by far, but you drank it that night when you killed that huge Boar. So you grimace as you sip the styrofoam infused java that has thickened as it sat in the pot for the last 2 hours.

2100 Hours: You are entering the first property you will check out, hoping the feral hogs are moving early this evening. Thermal scopes and spotters are turned on and ready. Coffee breath fills the truck.

2200 Hours: After riding a couple places you peer through your head mounted Night Vision as you drive into a field that you have taken wild hogs in before. Three hundred yards out you see black dots moving around with the randomness of a truck stop drug addict. But these black dots are addicts of a different kind, they are feral hogs, addicted to the freshly prepared agricultural field that a local farmer has painstakingly cared for. And on this night, instead of handing them some spare change…you’ll be distributing 5.56mm sleeping pills at 3100 feet per second. On a good night, this storyline might play out until daylight. On a bad night, you might waste a bunch of gas.

Most Old Timers think of night hunting as driving around in a four-wheel drive and occasionally holding a spotlight out the window hoping to catch a glimpse of the animals they are searching for. A past time thought of as “Taboo”, ranking somewhere up there with poaching and trespassing. Without a permit…still illegal.

Everyone has a story about someone they know being caught night hunting. Usually, it involves shooting deer from a truck window with a deer rifle, on a public roadway. Alcohol most likely in the equation. All dangerous, highly illegal, and frowned upon by most people.

The type of night hunting I am speaking about here involves suppressed weapons, thermal scopes, and helmet mounted night vision. All performed under a state nuisance permit normally issued in the spring and summer months. Depending on your budget, this method of night hunting could be considered expensive and if you are serious about it, time-consuming. It certainly does not include consuming alcohol. Save that for game day. 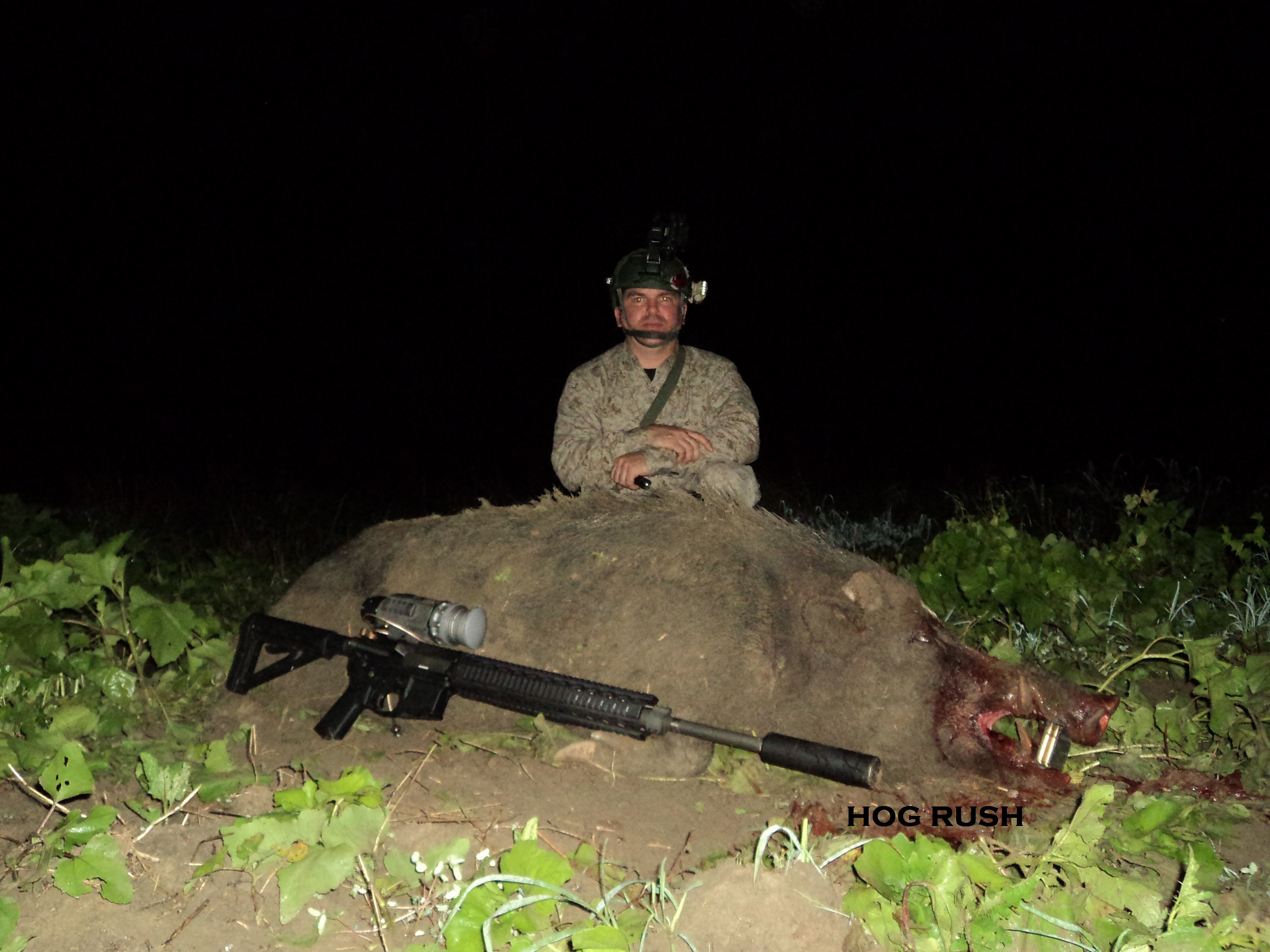 In the past 15 years, Alabama’s wild hog population has increased at an alarming rate. The good thing for farmers and landowners is that night vision technology has improved during this time. One of the main reasons that feral hogs are so prolific is that they are nocturnal most of the year, only coming out at night to feed and certainly breed. Wild hogs have 6-12 piglets per litter and up to three litters per year. Since a Piglet becomes sexually mature at 6 months, if you do the math, the numbers are astounding. Let’s say conservatively, a 6-month-old sow has 10 piglets. Five of which are also female. Six months later each of those 5 females have 10 of their own. That’s pushing nearly 100 pigs in a 12-18 month period from one feral hog when you average it out!

Contrary to what you may have heard or read about, feral hogs are very smart animals with a keen sense of smell. Their hearing and eyesight are very similar to the average human. I have the utmost respect for wild Hogs and it’s a shame they create the damage that makes them hated by most landowners. They are very resilient and tough as nails. When domesticated, they are known as the smartest animal on the farm.

Since feral hogs are so destructive in their search for food and comfort, they are despised by farmers and landowners. I have seen wild hogs dig holes so deep in a grassy hayfield, that a 2wd pickup truck would get stuck on a dry sunny day. Sometimes the areas of destruction will be the size of a football field. With holes over a foot deep. “Rooting” as its called, causes crop damage, erosion and runoff, and an overall aggravation to the farmers and plantation owners.

Feral hogs root the ground in search of grub worms and other sources of food such as acorns and grassroots. On a freshly planted corn field, wild hogs will go down each row like a machine and steal the seeds. If it were to rain during this time, the farmer would not realize this until the remaining seeds germinate revealing long bare spots in the field which will require spot replanting. The destruction can be very time consuming to remediate and it is very expensive, ultimately hindering profits. 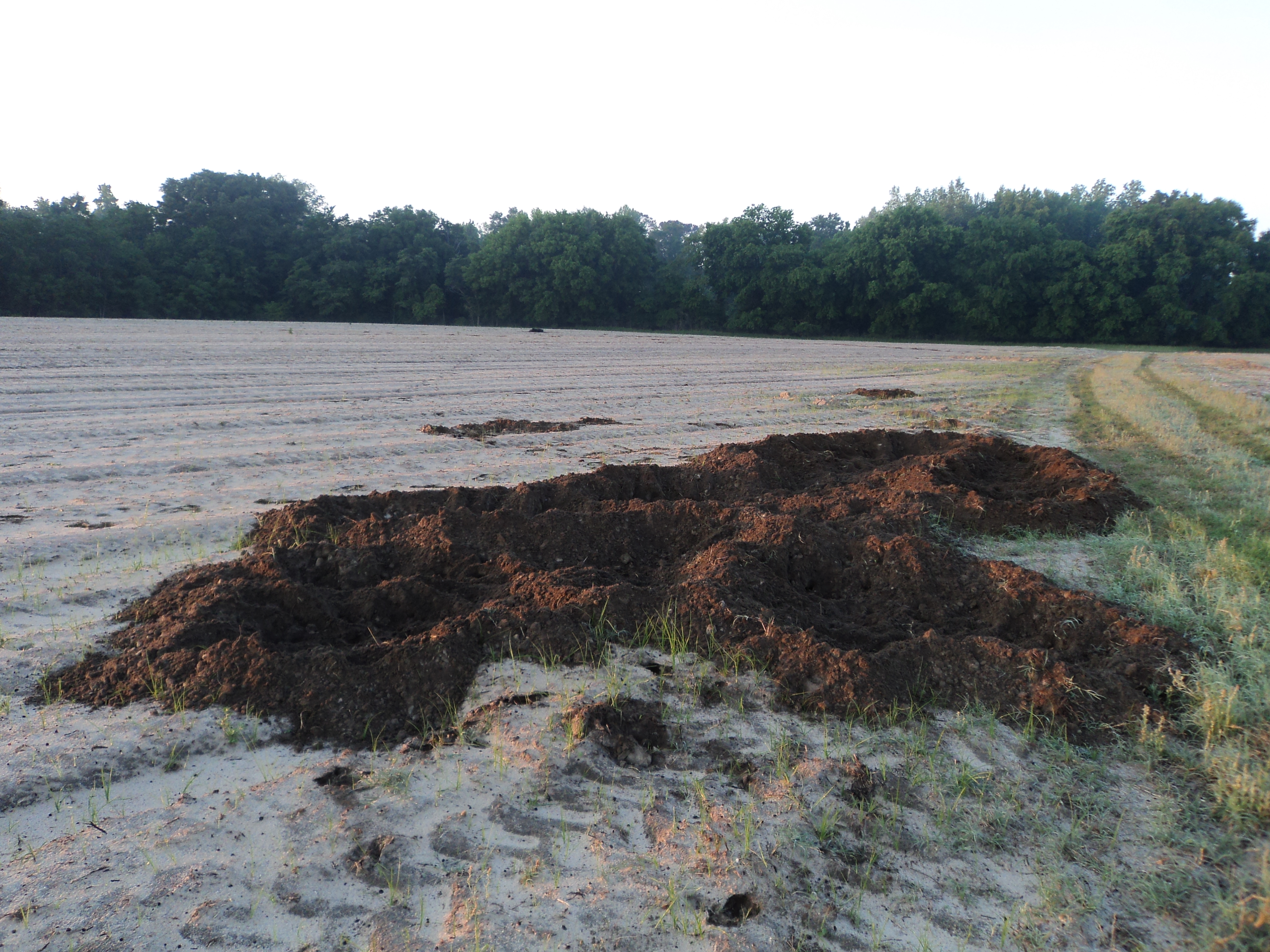 Over the past 8 years as an Alabama Hog hunting outfitter, my wild hog hunting outfit, HOG RUSH, LLC., has been responsible for the death of over 4000 free roaming feral hogs on farm lands and plantations. Every one of them rifle kills at night mostly using Suppressed weapons and thermal scopes. I have added a custom drone equipped with a thermal camera which changed the game in thermal hog hunting,. I have seen wild hog’s desire to live time and time again. They are fascinating animals and when prepared properly, wild hog meat is a delicacy.

When you start researching what gear you need to buy for wild hog hunting, first you should seriously consider what level of efficiency you will be satisfied with. Secondly, you should decide how much of an initial investment in time and money you are willing to make. Are you ok with sitting in a deer stand overlooking a feeder that has motion activated hog hunting lights? If so, you can be fairly successful with the same rifle you would normally use deer hunting and only adding a laser light for illumination.

The only investment you would need to make is the feeder, hog hunting light, and the laser light to illuminate the feral hogs once they enter your “Kill Zone”. With proper setup, you can set the feeder for certain times and get the hogs on a more consistent schedule in hopes you will be there waiting. This would not require any specialized optics or big investment. However, you will need a good bug repellant system and realistically, you will only have one or two shots as the hogs fade into the darkness once shots are fired.

On the thermal hog hunting end of the spectrum, you can spend thousands of dollars on specialized equipment similar to that of a military soldier. Thermal Scope, thermal spotter, helmet mounted night vision, AR15 style rifle with suppressor, electric buggy….all of these are tools that will help you become more successful at thermal hog hunting.

Most importantly, in my experience, time spent familiarizing yourself with your chosen equipment prior to the hunt will pay big dividends once you go out in the field. There is nothing worse than being out of breath as you reach the hogs or have inferior equipment that fails at the moment of truth. Get out to the range with experienced individuals and learn from each other. Take a walk in the woods every day to build cardio and muscle strength.

I hope you enjoyed this introduction to wild hog hunting at night. Look for future articles where I discuss in detail each and every aspect of tradecraft, equipment, marksmanship, and mindset. All from the perspective of a non-sponsored mind with real-world field experience.