Time moves at a constant pace. However, in some situations, it may fly by at super-sonic speeds and others drag on slower than a snail in a mudhole. It seems like only yesterday the firearm deer season opened in the Yellowhammer State.

Even though Alabama has a long deer season, almost three months, it can be ending before we realize it. And by this time, it would be a safe bet to conclude every inch of huntable deer land has been covered. Bucks may even be taking bets on which stands hunters will frequent the most in the coming weeks.

However, savvy deer hunters with an open slot remaining on their tag can change their tactics to complete their limit before time expires. They will have to get out of their comfort zone, change their approach and use some different techniques to bag a late season buck.

Swapping Stands and Going in Blind

This far into the season the deer have felt the pressure, especially bucks. They have become wise to the habits of the hunter. Bucks have changed their routes and patterns from those at the first of the season. The deer know when and how on which stands to avoid.

“I’ll change up my stand locations and even move some stands in the late season,” mentions Jeff Daniel of Golden Springs, Ala. “Sometimes it only takes one time of being busted by a buck for him to avoid that stand.”

Daniel added if he knows a buck is in the area, he will only hunt that stand if the wind is right. Also, he may relocate a stand or use a portable climber and move a few hundred yards away from an unproductive stand. This is a little extra work but overall worth the effort.

Ladder style stands are a good choice. Hunters can slip in and out of the stand quietly without the deer noticing. A comfortable stand is a must for a hunter to endure long hours waiting for a bruiser buck to show. However, over hunting a stand and leaving a hint of human odor will have deer detouring around the stand.

A recent deer study by biologists using GPS collared does saw fewer visits by deer on each consecutive day a stand was occupied during the season. The deer visits increased as the time between hunts in the stand increased. The conclusion, make certain the day you choose to hunt a particular stand is a good one.

Moving ladder stands during the season may not sound a like a wise choice. But, if the bucks are not showing up there, a new location is needed. Do some scouting in the area for fresh buck sign and choose a new stand sight accordingly.

“You don’t want to move a stand and take a chance on spooking deer while doing it,” Daniel advises. “Windy days are a good time to make the move, as any unwanted noise is muffled by the wind.”

Relocating a stand may not be possible at certain times. If the chances of alerting deer in the area are high use a different approach. Portable climbing stands can be a wise choice. New models by Summit or API are light-weight and easy to carry into a secret spot.

Another new hunting accessory that is invaluable to deer hunters any time during the season is pop-up blinds. Certain models are compact and easy to carry. They can be set up in minutes with minimum effort. The blinds provide concealment in movement and in scent control. A comfortable chair allows the hunter to remain in the blind all day if needed. 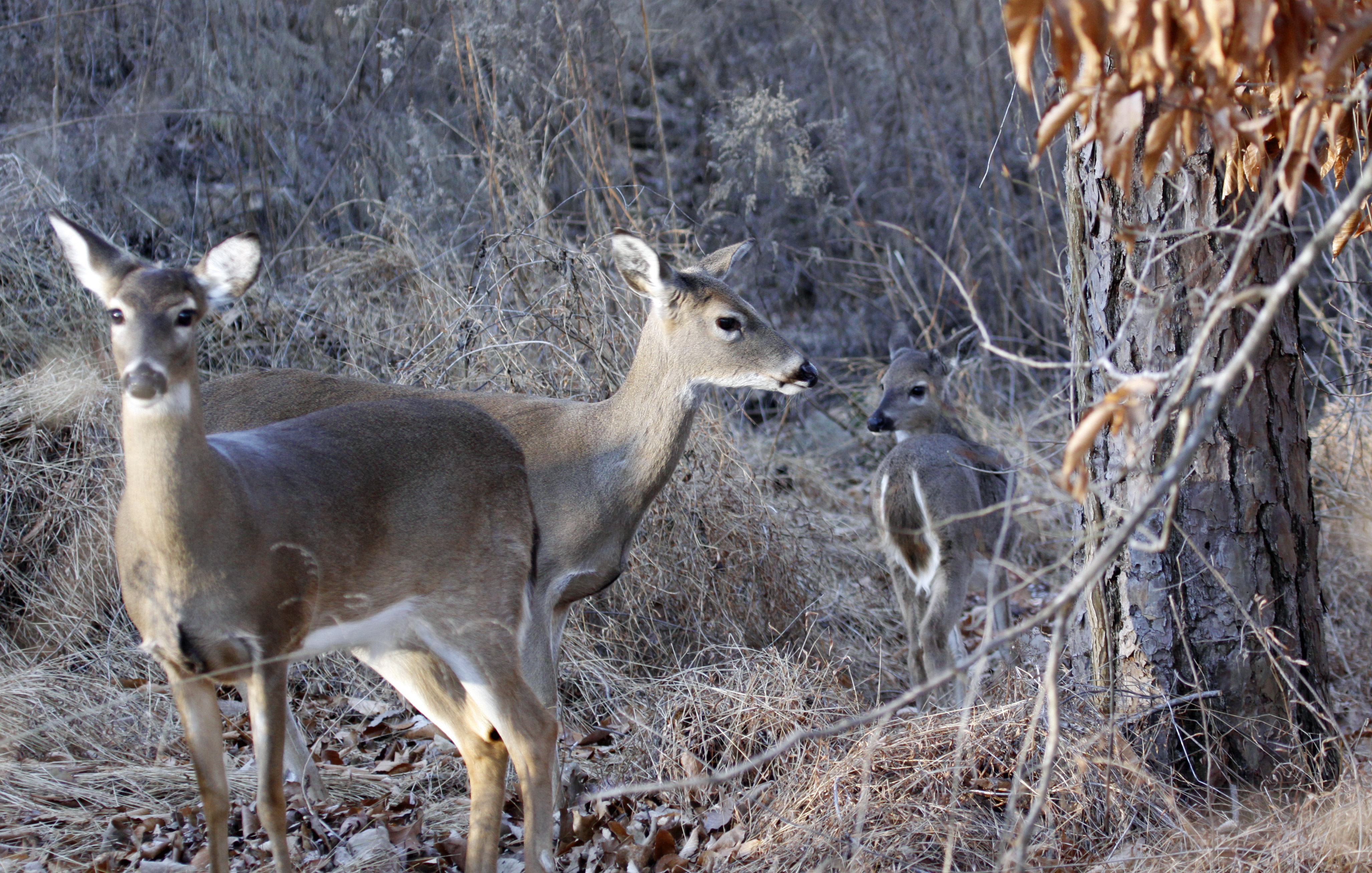 If does are around a buck may be close by. Photo by Charles Johnson.

Don’t Give Up on Calling

Alabama is a unique state when it comes to deer hunting, particularly the rut. By the time this article is printed the rut could be over in some areas of the state. And it cut be peak rut in other regions while some spots are waiting for the rut to begin.

“Deer can be vocal at times,” reports Matt Smith of Oxford, Ala. “In my hunting area, the bucks really start grunting more in late January.”

Smith said he has been surprised many times by the number of bucks grunting and snorting in the late season. He always carries along a grunt tube and calls frequently in the latter part of the season. Deer are curious animals and a low grunt could bring a buck in the direction of your stand.

Rattling can be another late-season tactic for bucks. Especially if the rut is just beginning in your area. Even in locations where the rut has concluded, rattling can still attract deer. Sometimes the deer may be a little more cautious in their approach since they are not willing to fight, but rather just observe.

“The rattling bags work fine for me,” comments Smith. “They are easier to carry in than a set of rattling horns and sound realistic enough.”

Some hunters will start off will a low-volume rattling sequence. But after the rut, it usually takes some fairly loud and aggressive rattling to get an old buck’s attention. If you know a buck is in the area give rattling a try. You never know what might show up.

Getting High and Staying Low

By this time, a majority of the foliage in on the forest floor. Tree stands that were obscured by red, gold and brown leaves now stand out in the open woods. Bucks will have no trouble picking out a human form on the stand. Natural limbs or pieces of camo netting will help hide the hunter while in his stand.

Also, deer do look up and if they have encountered movement or foul odors in the area, they know which direction to look for spotting a hunter on the stand. Most heights of ladder stand range from around 15- to 18- feet. They can be relocated to thicker cover, yet still provide a good view of the area.

“Also, deer do look up and if they have encountered movement or foul odors in the area, they know which direction to look for spotting a hunter on the stand.”

Hunters utilizing portable climbing stands can choose a tree that allows security and camouflage conditions. Picking a large diameter tree, a stand will safely fit, will provide a stable platform and hide the silhouette of the hunter. Also, a higher perch point has other advantages.

“In January after the leaves are gone, I like to climb higher up a tree,” comments Gene Irvin of Talladega, Ala. “Sometimes I may get 25- feet or higher which allows me to see deer further off.”

Irvin says being further up a tree puts him out of the line-of-sight of deer. Also, the higher altitude helps disperse any human odor. Hunters should always wear a safety harness or fall restraint device anytime they leave the ground.

Hunters wishing to remain attached to terra firma can opt for a blind as mentioned above or maybe a different approach. Smith recalls an old hunter using a “hammock” slung between two trees. The old hunter had someone sew in a gun scabbard.

“He would place the head of the hammock a little higher than foot end,” Smith described. “The hammock was close to the ground, but he could see deer approaching.”

Smith mentioned the old hunter would have deer walk in close. It may have been out of curiosity. The hammock looked like a log or fallen tree and did not spook the deer. This method would be safe and comfortable enough for an all-day hunt.

In the late season, food sources for deer are important, especially after the rut and during snaps of cold weather. Food plots, agriculture fields, and oak flats are top locations for locating late season deer. Bucks can become wary when approaching food plots or open fields.

Hunters can set their stands back inside the tree line 20- 30- yards and catch a buck approach before dark. Bucks may not enter the field until last light or later. A couple of trail cameras positioned back in the cover can give hunters an indication of what time the deer are moving in.

“I continue to use game cameras throughout the season,” advises Irvin. “The cameras tell me what deer are there and when they are moving.”

Certain model game cameras have a mode called plot watcher or something similar. When set to this mode the camera will take a photo every one-to-three minutes during daylight hours based on the settings. The photos are then loaded into the software and can be viewed as a time-lapse.

This camera feature allows hunters to see what time bucks may be entering the field during the day. The deer do not have to trigger the camera, so a wider area of view of the field or food plot can be monitored. Hunters will learn where to set a stand or blind and what time the deer are approaching.

Late season buck hunting can be a challenge. But, hunters that change their tactics and take a different approach can fill their tag know they had a great day outdoors.