Air rifle shooting and hunting has been growing in popularity but it isn’t the world of the simple bb gun. Today’s air guns are sophisticated and efficient tools. To get the inside track on what people need to know when getting involved in the sport and selecting the best air rifles for hunting, I interviewed Tyler Patner,  product manager for Pyramyd Air, one of the largest air gun retailers in the world. Read on to find out how to select the best ai rifle for your type of hunting whether that’s big game or small, or you can listen to the full interview below.

“When a lot of people think about air guns, they think of guns like the Daisy Red Ryder BB gun which is actually a spring piston air rifle,” Patner said.  “Most people are familiar with brake barrel air guns and they range from the low power models all the way up to small game hunting air guns that provide velocities of 1,100-1,200 feet per second.”

“CO2 cartridge guns aren’t used a whole lot for hunting because CO2 is a temperature sensitive gas and if you take it out in cold weather, you’re going to get very diminished performance and we typically don’t recommend them for hunting,’ Patner added.

The next step up the air-gun food chain is the single or multi pump guns which can shoot either bbs or pellets. The higher-powered models are adequate for small birds or game-like squirrels at 12-20 yards. 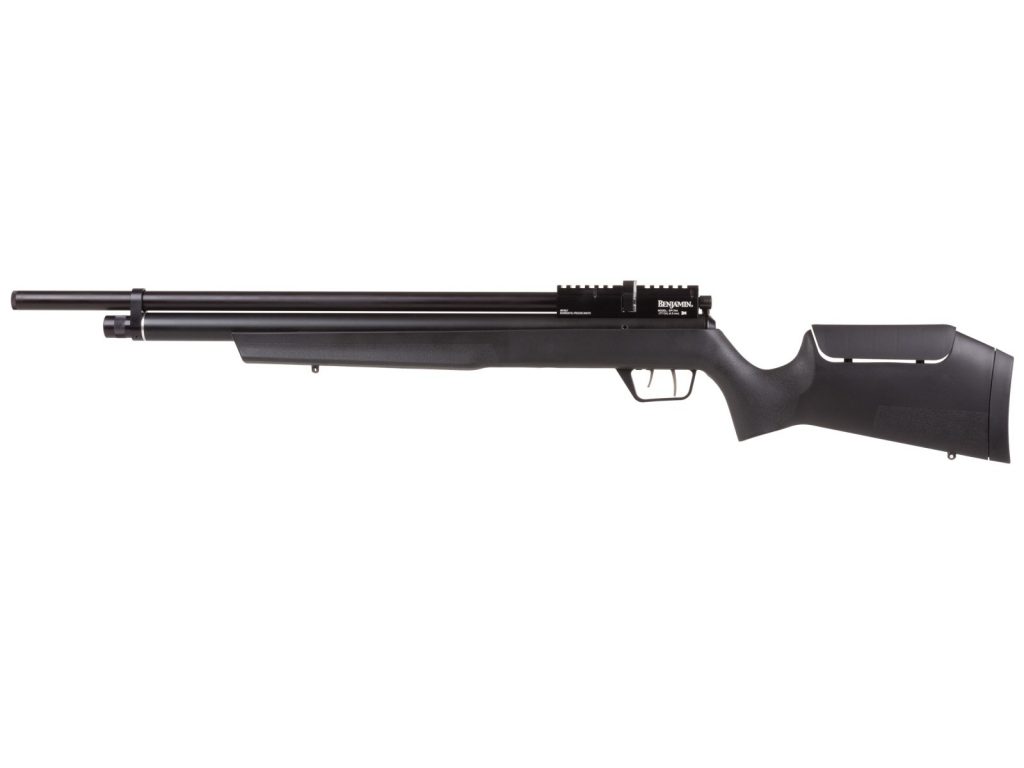 With caliber size ranging from .177  all the way up to .50, air rifles are growing in popularity as a legitimate hunting option.

Then comes the pre-charged pneumatic (PCP) air rifles which are charged from a separate source of air. These guns can range from low powered .177 calibers all the way up to .50 caliber “big bores” that are powerful enough to down big game.  This category is where the industry has seen significant growth and they are becoming more popular for hunting.

Patner says that the increasing popularity for airguns for hunting is due to the fact that they are relatively inexpensive, quiet, allowing for backyard fun while not disturbing neighbors, a person doesn’t have to go through a government background check and the requisite paperwork to own one, the air gun can be delivered right to your door with no hassle, ammunition is cheap and it is accurate.

“They are the best air rifle for hunting small game and teaching the fundamentals of shooting to young people and they are safe,” Patner said. “A .22 long rifle cartridge has about 100-foot pounds of energy and that that bullet is going straight through a squirrel and who knows where it will end up.  A .22 caliber break barrel rifle produces about 20-foot pounds of energy and that is good enough to take a squirrel out to 50 yards.”

An additional benefit of using an air gun is that if the projectile, that is traveling between 800 and 1,000 feet per second passes though the game animal, it won’t travel very far because it is dumping most of its energy in the animal it hits.

From a fundamental shooting perspective there is a difference between shooting an air rifle and a rimfire or centerfire firearm and it has to do with recoil and the realization that it takes a little bit longer to get the projectile out of the barrel of an air rifle.  That means the shooter has to stay on target longer than one would with a more powerful cartridge to make sure they actually hit what they aimed at.

Patner points out that spring and gas piston break barrel air guns are not the easiest to shoot.  They have a “weird” recoil in that it recoils back into a person’s shoulder but also forward as the piston hits home.  That means shooters have to hold their shot after they pull the trigger, albeit just milliseconds, but it is different than a normal firearm. It is similar to the ignition delay on a black powder flintlock or percussion cap rifle.

What about medium and even big game hunting air rifles for sale?

According to Patner when it comes to whitetail size deer or larger game animals, while there are some .357 caliber air rifles being used effectively, the trend is towards the .45 and .50 caliber air rifles.that produce upwards of 700-foot pounds of energy.

“That is more power than most pistol caliber rounds offer and a number of companies produce big bore air rifles, including the AirForce Texan line of guns, the Hatsan Piledriver platform and the Umarex Hammer,” Patner said. “That is a ton of power and there’s not a whole they can’t do within reasonable distances.

What is a “reasonable distance”?

“Part of the education process for folks is that they’re not going to taking 200-yard shots with a .50 caliber air gun and they need to try to keep shots in the 30 to maybe 60- or 70-yard distances, basically a little further than a normal archery distance,” Patner said.  “That is the distance where these guns are going to shine and can do just as good a job as most of your firearms are.”

Adding a scope to your air rifle is easy and takes your gun to a different level.

While some air rifles in .25, .30 and .35 caliber, such as the FX Airguns Impact in .35 caliber and the Benjamin Bulldog in .35 caliber have magazines, for the most part, the larger calibers are pretty much single shot rifles.

“The Umarex Hammer rifle does have a two round magazine so there is no lag time with a follow up shot but most of the larger caliber rifles are single shots,” Patner noted.  “It is really just a matter of pulling the bolt back and cycling the next round into the chamber and you can shoot as fast as you can reload.”

Since air guns are not classified as “firearms” by the Bureau of Alcohol, Tobacco and Firearms (ATF) they are not subject to significant government regulations.  You do not have to go through a background check to purchase one and it can even be shipped directly to your front door.

An additional benefit of air guns, from .17 up to .50 caliber, is that they are relatively quiet when they are shot compared to traditional firearms.  One of the reasons for this is that suppressor laws for firearms don’t equally apply to air guns and manufacturers are able to build in moderators or shrouds on many of the guns to keep the nose level fairly low.

That means you can play around in your backyard with the smaller calibers without really bothering the neighbors and hone up your shooting skills without calling a lot of attention to yourself.  It also means if you want to do some “pre-deer hunting season” hunting or shooting on your hunting property, or you need to engage in some antlerless deer harvest, you can do it without noise pollution and overly spooking your herd.

As a comparison, a lawn mower operates at around 90 dBs, a doorbell is about 70 dBs and a washing machine is about 75 dBs.

Patner pointed out that in terms of the regulation of hunting with air guns, it is very much a “state by state” deal so you need to do your homework to make sure you are following the rules.

“To help with that, we created kind of an air gun map, which is a resource we have on our Pyramyd Air website where you can actually select your state and it’ll give you a list of basically all the game animals that are legal to take and what the restrictions are or what the specifics are on what you have to use for those animals,” Patner said.

So, what does it cost to break into the airgun game?

The retailer Sears is credited with coining the “good, better, best” analogy.  You could buy a “good” shirt, a “better” shirt or the “best” shirt.  This holds true for air rifles and accessories depending on the quality of the equipment you purchase. 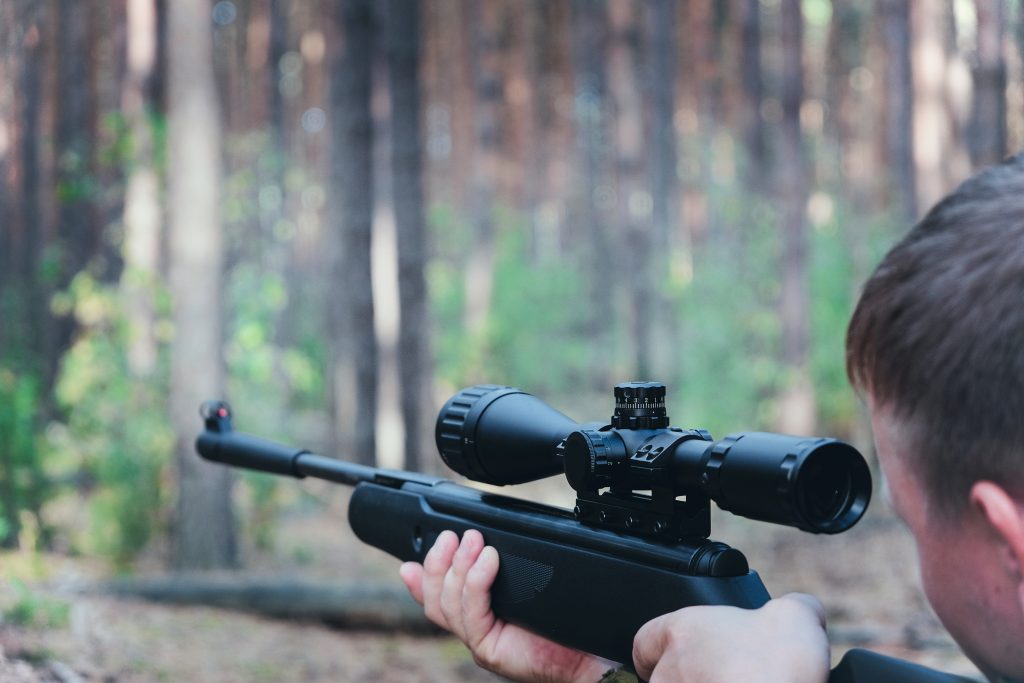 Air rifles land in a wide price range and are very customizable, giving hunters many options to find the right gun for their particular situation.

Patner said that if you are just looking at small game hunting with an entry level break barrel rifle you can probably get away with spending about $200 for a gun and, depending on the model, maybe even a scope along with ammo. If you want to jump to higher quality, a gun will run $300 to $500 and, with good optics, easily end up in the $600 to $700+ range.  For PCP’s it is a bit pricier simply because you need more stuff.

“With PCPs the problem that most folks have with pre charge guns is that there’s ancillary equipment necessary. You need a tank, a compressor or a hand pump and when I talk about a hand pump, I’m talking about a bicycle pump on crack,” Patner said.  “For example, you can spend $300 for a gun, anywhere from $150 -$250 for a hand pump, then invest in a scope and the package can be around 600-$700 or higher.”

Once you jump to the major leagues and get into the big bores, the power goes up and so does the investment and you can be talking about some “significant coin”.

Selecting an air rifle for hunting is as simple as defining your budget and what species you want to hunt. There is no question that today’s technology is capable of taking every game species with good shot placement. The benefits of little noise and no recoil make air rifles an attractive option for youth hunters, new hunters, and hunters who want to remain discreet. The lack of regulation in obtaining this quiet hunting tool makes it an attractive alternative to buying a suppressor and the ease of obtaining ammunition is welcome in today’s environment. No matter what your budget, your safe deserves a spot for an air rifle, or two.