In this article, we’re going to take a look at some of the best Alabama Trophy Deer Hunts on public lands, at Alabama Deer hunting lodges, and third, Alabama high fence deer hunts. We’ll dive into what you can expect to pay, the type of experience you can expect to have, and where the best opportunities are whether you’re choosing to DIY or go on Alabama guided deer hunts for the buck of your dreams.

Like many Alabama deer hunters, Brandon Smith once thought that hunting in an enclosure to take a trophy buck was too expensive for him. Little did he know, there are Alabama trophy deer hunts available for every budget. “If you’ve checked, the price of leasing land to hunt has gone up drastically. If you have a trailer or a clubhouse on the property or stay in a nearby motel, purchase your food and gas for your four-wheeler and count the costs to maintain that four-wheeler, your vehicle, the green fields on that land and the money you’ll spend for plowing, herbicides, fertilizer, lime and seed blends, you’ll probably spend more money than what you’ll pay for two nights lodging and three delicious meals per day and the opportunity to harvest a buck scoring 140-149 inches on Boone & Crockett (B&C) at an enclosure. That buck may be bigger than any buck you’ve ever seen on Alabama’s public or leased lands. Also, on each morning and afternoon hunt, you’ll get to see more trophy bucks than ever before in your lifetime with racks scoring 200-300+ inches.” 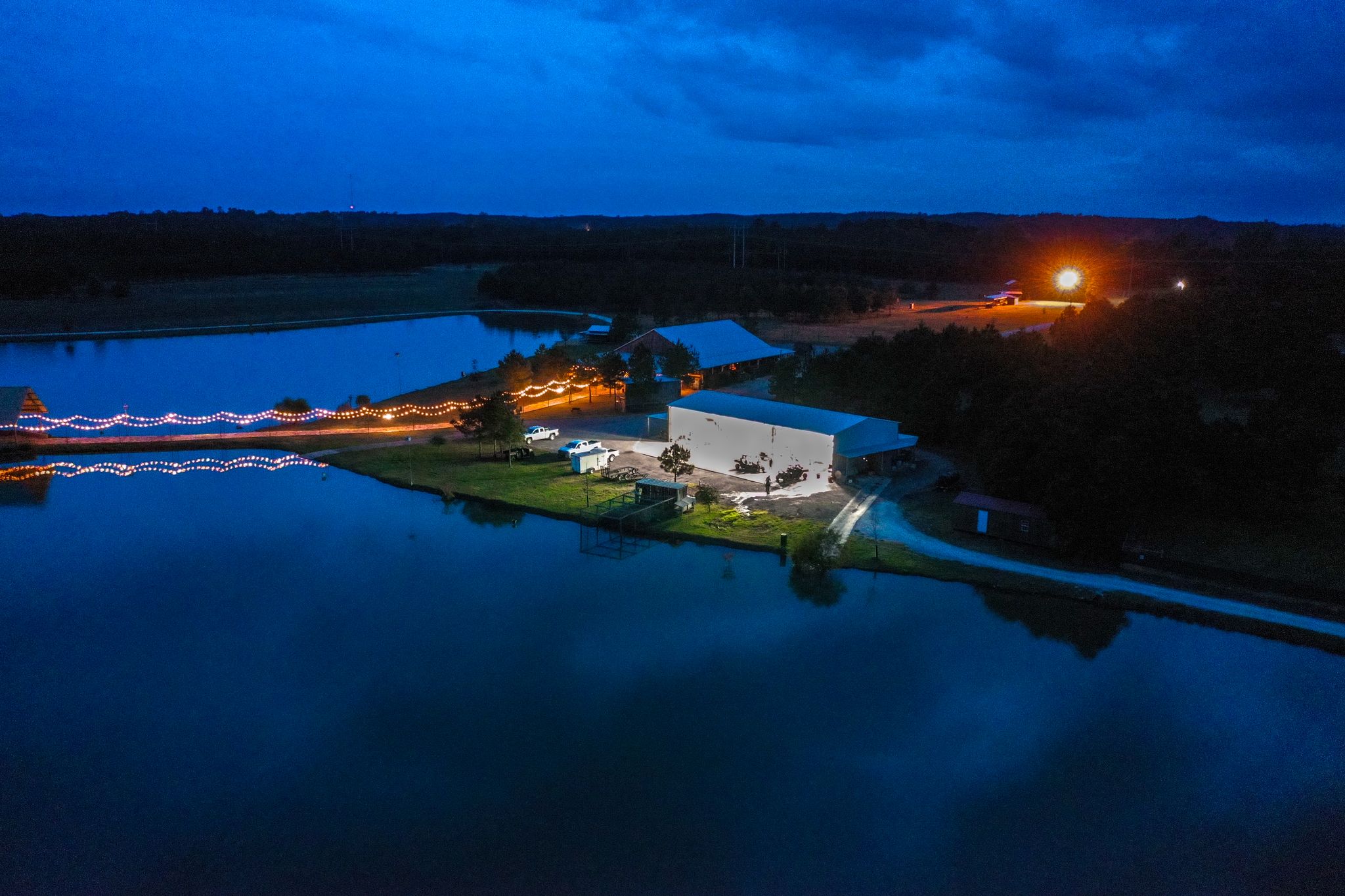 Alabamians are seeing more trophy bucks being taken throughout the state – from enclosures and also from public and private lands.

Today, Alabamians are seeing more trophy bucks being taken throughout the state – from enclosures and also from public and private lands. In 2020 already a hunter took a 198-inch Boone and Crocket buck with a crossbow on a Tallapoosa County family farm; and a bowhunter harvested a 217-pound, 11-point buck with a 27-inch inside spread at Black Warrior WMA in Lawrence and Winston counties.

* Dispersal of Bucks – If every morning during the rut, you knew you’d probably get beat up by a bigger, stronger, more-mature buck deer than you, chances would be that you’d move out of the neighborhood to feed, water and breed elsewhere. Two-year-old and older bucks do move when there’s an overabundance of bucks on a property.

* The Use of Quality Deer Management – More and more landowners, especially Alabama deer hunting lodges, are practicing the philosophy of letting little bucks walk to grow bigger bucks, this is happening on public land too, even on state WMAs. 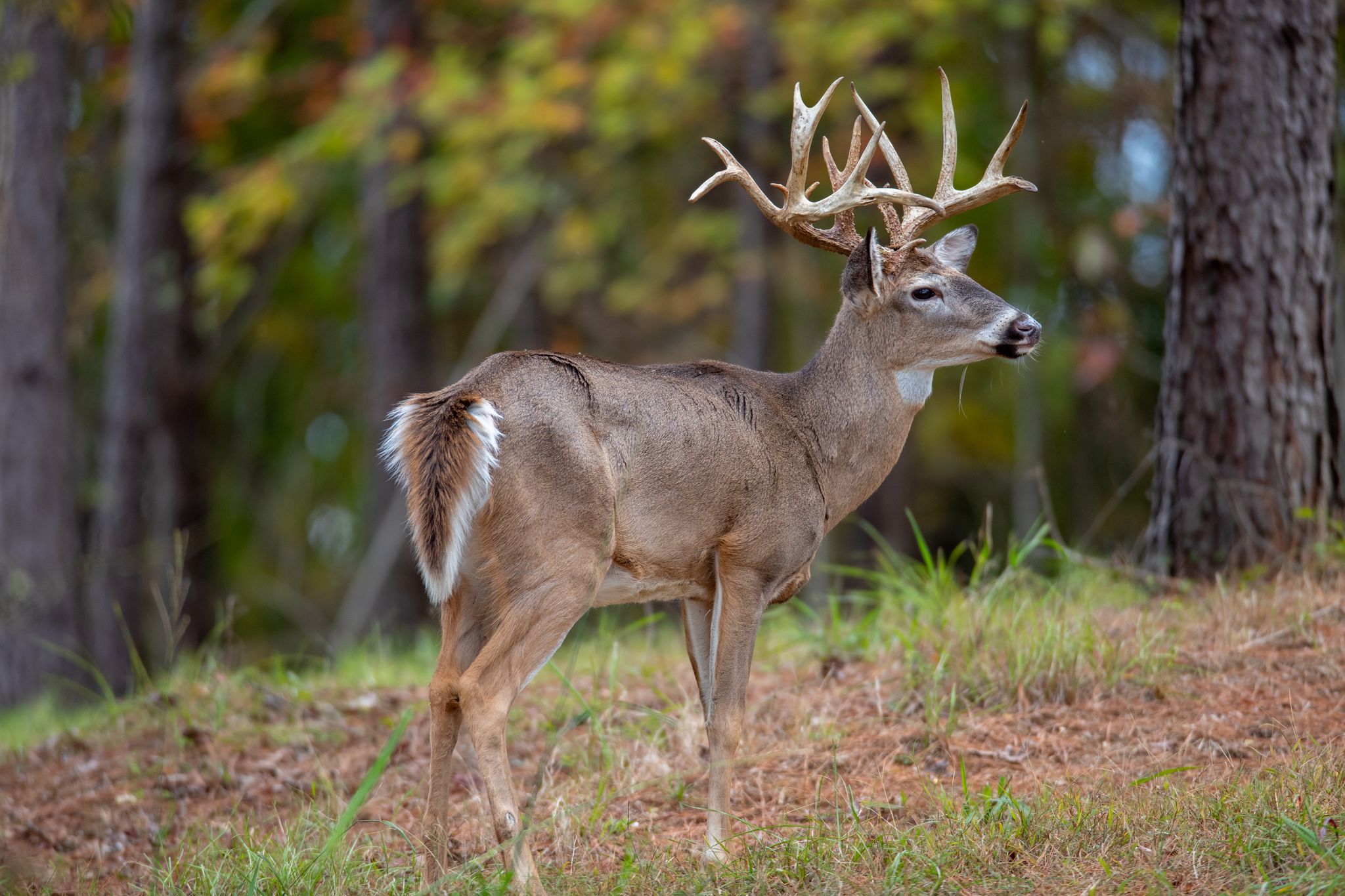 Alabama’s WMAs are beginning to produce more quality bucks like this one on public lands.

* The Practice of Hunting Trophy Bucks – Most Alabama deer hunters who have been hunting several years or more already have taken spikes, 4-pointers and small 8-pointers. Now they’re searching for bucks with racks that will score more than 110-120 inches.

* The Establishment of Deer Sanctuaries – Setting-up sanctuaries for deer is a key ingredient to consistently producing big bucks on the lands you hunt. Sanctuaries include the very-thick places on the land you hunt that hunters seldom go into, unless they’re blood trailing a deer.

* New Breakthroughs in Alabama High fence deer hunts Producing Enclosure Trophy Bucks – Alabama is one of the fastest-growing states for building enclosures, breeding and raising trophy deer. Because so many enclosures are in Alabama, the price of taking an older-age-class buck at them has dropped dramatically. Many breeders now can produce 200-inch buck deer in 1-1/2 to 2-1/2 years by artificially inseminating monster-sized bucks’ genetics into does with a history of producing bucks with large racks and heavy body weights.

* The Use of Trail Cameras – Because of the extensive use of trail cameras by hunters, they can learn before they hunt whether a trophy buck is on the property. Trail cameras from Alabama deer outfitters have allowed today’s deer hunters to selectively harvest the older-age-class bucks they want to take.

The least-expensive way to take a trophy buck is to hunt public lands. Today wildlife biologists on WMAs around the state are helping to produce bucks that will score 150-plus inches. Each year a steady increase of bucks this size have been harvested by hunters who put in the time to study the land, learn where the deer are on the land and hunt and scout as often as they can to pinpoint the places where their chances are best for taking a trophy buck. 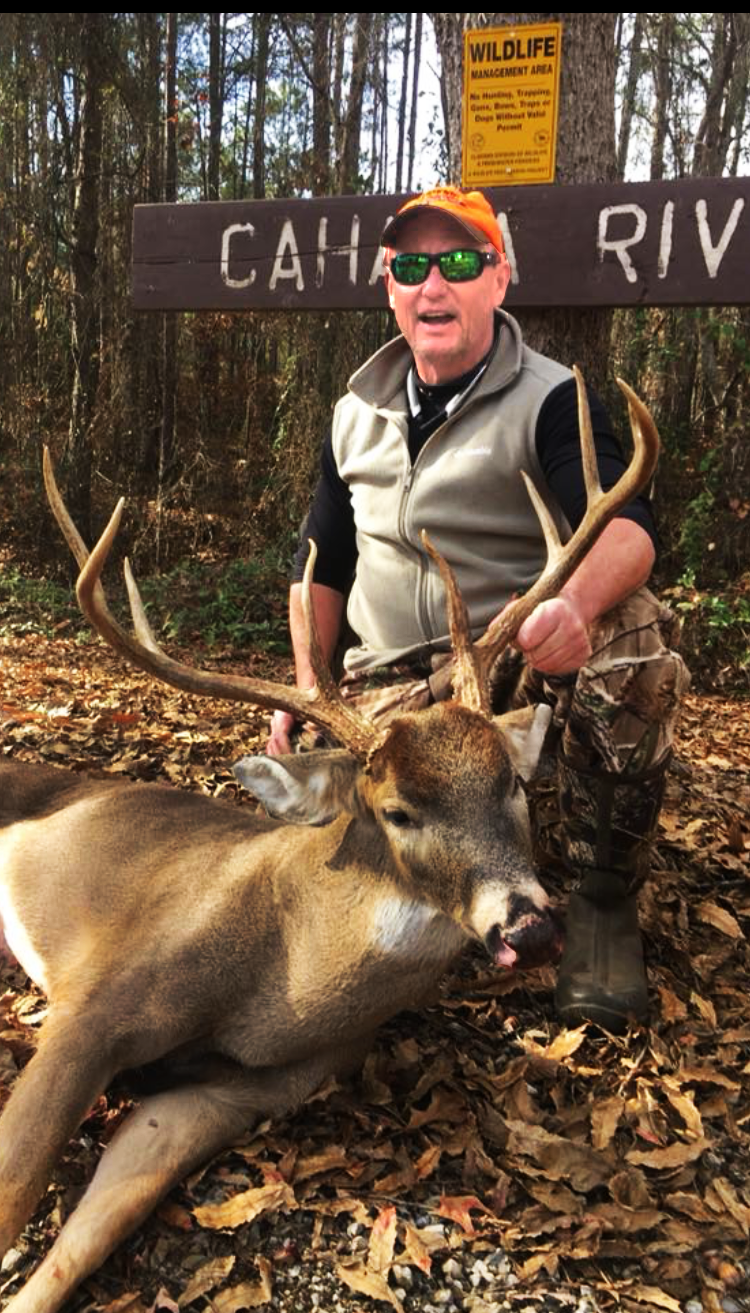 The hunters who hunt and scout before, during, and after deer season will take some nice bucks like this one on a WMA.

If you’re hunting deer on leased land, there’s a catch-22. When hunting a large tract of land in good deer country, the price to hunt that land may be over $1,000+ per year per person. Paying this rate, you still may have 30-100 members on the lease, which means higher hunter pressure.

You’ll be less likely to take an older-age-class buck on this lease. Or, you can belong to a lease for a smaller tract of land with five to 10 hunters. But once more, you’ll have to endure high hunting pressure and may or may not see a mature buck there.

Fortunately, there are a number of Alabama deer hunting lodges where for a fee a hunter can hunt land that not only homes a good population of older-age-class buck deer but also numbers of green fields, open spaces and stand sites. The hunting pressure on those lands is rotated, so the bucks aren’t hunted as heavily as they are on public lands and leased lands.

The lodge owner has spent the money to plant green fields, build shooting houses, hang tree stands, feed the deer supplementally, provide sanctuary for the bucks and scout the land to put the hunters in the very-best places to try to take an older-age-class buck.

Because Alabama has a number of enclosures that breed and protect their bucks until they reach the older-age classes, the price of harvesting one of these bucks has dropped dramatically, since the first Alabama high fence deer hunts were started in the state. “Great Days Outdoors” has interviewed Brandon Smith, the general manager of Soggy Bottom Lodge in Linden, Alabama. 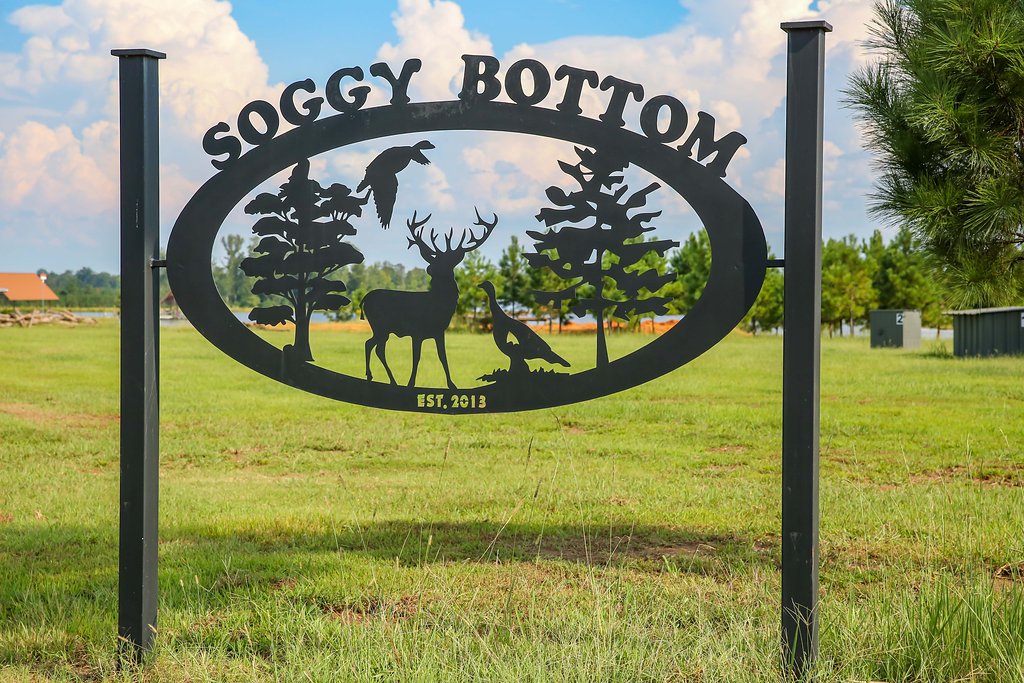 “Soggy Bottom, established in 2013, was opened to the public in 2015,” Smith reports. “The property is a little over 1,200 enclosed acres and homes trophy whitetails, elk and fallow deer and four fishing lakes. We hunt quail, ducks, pheasants, deer, turkeys, and  have an 18-station sporting-clays course, a Five-Stand range, and two of the finest lodges you’ll find in the Southeast. We also serve a five-star menu.”

“Our primary customers  for are corporate businesses and large family groups. I’m often asked, ‘Why do hunters come to enclosures to take whitetails?’ Corporate customers often bring their clients here to hunt because they know their clients will be successful, and our prices are reasonable. If I’m honest, I think they come primarily for the lodging, the meeting rooms available and the outstanding food.” “

“This setting gives the corporate people and their clients a chance to have a good time, harvest deer, turkey, ducks and/or quail and also get to know each other. They realize their clients probably will see more big bucks in a couple of days than they’ll see anywhere else in a lifetime.”

The minimum-size bucks that Soggy Bottom allows its hunters to harvest are 140 inches, but one hunter took a buck that scored 370 inches B&C. To take bucks that will score 140-149 inches, the cost is $4,500 and includes a three-day lodge stay with two nights and food during that time. A buck that will score 150-159 inches costs $5,500, which includes three days of food and two nights lodging.

Also remember, if you’re hunting on a lease, you have to control the property to keep it from being poached and protect the deer herd from the natural predators on the land. You never may see a buck that scores 150-inches or better. Enclosure owners put up high fences to keep predators out, stop poaching and be able to better control the genetics of the deer herd and the hunting pressure inside that enclosure. 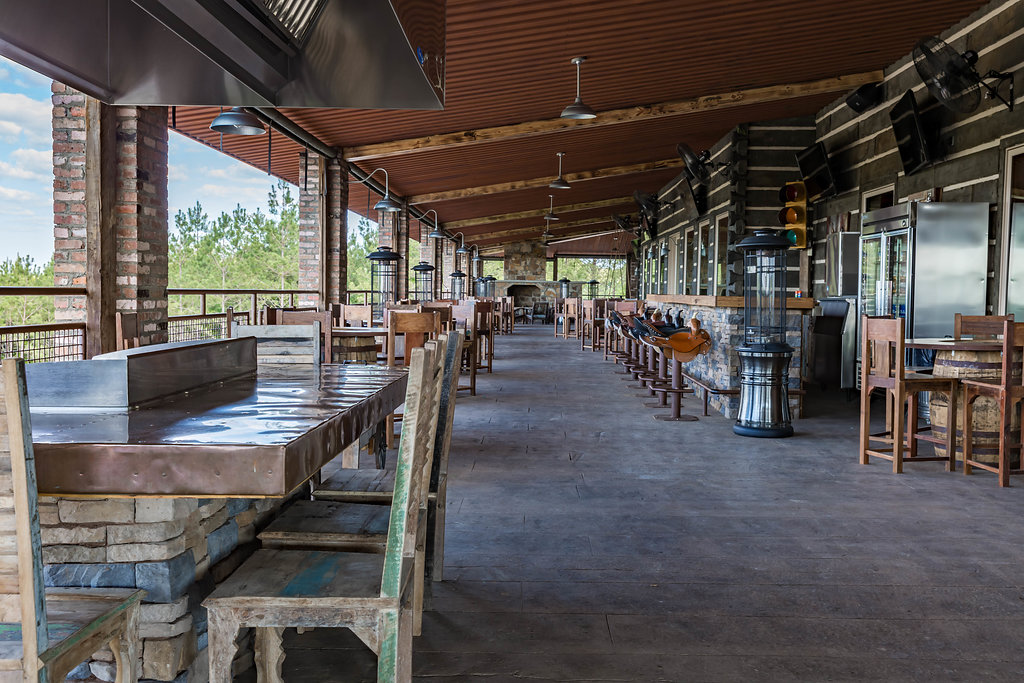 According to Smith, “In our area around Linden, hunting-lease prices are $15-$18 per acre. Also, most people will want to put green fields on that lease, so the lessees either will have to own or rent a tractor to plow, buy lime and fertilizer and plant crops for wildlife. Alabama guided deer hunts on enclosures is probably the least-expensive way to take a buck that will score 140 or 150.

Some of our customers tell me, ‘I’m tired of paying a really high lease price and never seeing a buck that’ll score even 110-120 inches B&C.’ Just to have the opportunity to see 8-20 bucks that will score 140 to over 200 inches in two days, stay in a fine lodge and eat delicious food is worth the price of our enclosure hunt. All of our hunters hunt with guides experienced enough to field judge each of the bucks they’ll see.”

Smith also mentions that since many hunters don’t hunt more than two or three days a year due to a lack of time, they want to enjoy a nice stay and also have the opportunity to take a buck bigger than they’ve ever seen on the places they hunt.

“Great Days Outdoors” isn’t promoting public land over Alabama Deer Hunting Lodges or Alabama High Fence deer hunts but rather wants to show the different options Alabama hunters have to take the bucks of their dreams.