It’s an obvious fact anglers have known for a long, long time- Gulf Coast game fish love to eat shrimp. Just about everything that swims will eagerly devour a properly presented shrimp. But anglers have also known for a long time that some days it’s hard to get live shrimp. And some days, it’s impossible to get live shrimp at all. Thus the need for a good, reliable substitute for live shrimp has been present for a long, long time, too. Traditionally, it has been very hard to get an artificial shrimp lure that looks and acts like a real shrimp.

However, about thirty years ago, the explosion of soft plastic lures which revolutionized freshwater bass fishing became a part of the Gulf Coast’s saltwater fishing scene. At first, saltwater anglers used many of the same soft plastic lures which bass anglers used. Some of these lures looked a little bit like live shrimp, and in the hands of a skilled angler, these original soft plastic shrimp look-alikes could be made to move and act very much like real live shrimp.

Thus was born the artificial shrimp lures of today.

Super realistic in appearance and with built-in scent, some of today’s artificial shrimp work just as well as the real deal- in some cases, even better than the real live shrimp.

We asked a number of experienced guides who depend on their ability to put their paying customers on fish every day to tell us about their use of artificial shrimp lures. In particular, we asked when these experts used unscented shrimp lures and when they had more success with the scented lures.

Captain Patric Garmeson (Ugly Fishing- 251-747-1554) tells us that he uses unscented artificial shrimp lures just about year-round.  He says,” I use a VUDU shrimp under a cork for reds, trout, flounder, and even largemouth bass. This unscented lure is really durable, and it holds up better than most of the scented shrimp lures.  Not as many undesirable fish- pinfish, croakers, and hardhead catfish- will bite and tear up this unscented lure.”

Captain Patric does go to the scented shrimp lures when he’s fishing deeper water. He rigs a GULP! Shrimp on a ¼ to 3/8 ounce jig head and works the lure on the bottom.

Captain Patric has had good success with the Fishbites Fight Club scented lures, and they seem to be more durable than most other scented shrimp lures.

Our buddy Captain Yano Serra (SpeckTackleLure Fishing- 251-610-0462) has fished the Mobile Bay system for a long time, and shrimp lures are one of his reliable choices for almost all species of game fish.

He says, “I use the unscented shrimp lures when the fish are hungry and actively feeding. I fish them under a popping cork. I use VUDU and DOA jigs, and I’ve used the old Beetle Grub for a long time.”

A prime situation for using unscented artificial shrimp lures according to Captain Yano is when birds are working bait under diving birds.

Another situation where the scented artificial shrimp lure really shines is when working thick structure. The artificial scented shrimp can be rigged weedless and snagless, and when the fish bite the scented lure, they tend to hold on to it longer for a better hook set.

Captain L. W. Burroughs (Intracoastal Experience- 850-585-7173) relies on a scent for most of his artificial shrimp use. He says,” I always put Smelly Jelly on my soft plastics.  There’s just so much advantage to scents. And in winter, the scent really helps.”

The scent on artificial shrimp lures is especially productive in low visibility situations.

Captain L.W. uses scented shrimp lures for catching speckled trout and white trout. He prefers to use a GULP! Shrimp for redfish because this lure has a strong scent.

Captain L.W. sums up his theory- “If I’m fishing soft plastic shrimp lures, I put a scent on ‘em.”

Captain Richard Rutland (Cold Blooded Fishing- 251-459-5077) agrees with Captain L.W. when he says, “I always put scent on my artificial shrimp lures- even under a popping cork.”

Captain Richard says, “Fish use their noses to find bait. Reds and flounder especially use scent to find their prey. I fish a lot of muddy water, and I use the scented lures to catch the fish because they use their sense of smell more in the muddy water.”

When asked what products he uses, Captain Richard recommends Pro-Cure which is added to the lure and GULP! Shrimp which has the scent built in.  He also says,” I like Fishbites strips. These seem to really match the scent of real shrimp.”

Captain Richard tells us, “Even when I’m fishing for trout, scent can’t hurt. In fact, I put it on everything I use except topwater plugs.”

Captain Bobby Abruscato (A-Team Fishing- 251-661-7696) fishes the waters of Mobile Bay and the surrounding waters, and he knows a lot about the fishing there. He says, “ I use unscented artificial shrimp lures all the time when I’m targeting trout. I like the VUDU Baby Shrimp because of its size and sink rate which is better than a grub on a jig head. It sinks more like a real shrimp- diagonally in the water and not straight to the bottom.”

He says, “ I use a GULP! Mantis Shrimp for reds- it has an incredible scent. I use a BDS jig head– It helps the GULP! have a life-like action.”

Captain Bobby adds that he carries and uses Fishbites and adds little pieces to lures to increase the scent.

Michael Carr of Fishbites tells us, “Some fish have a very complex sensory network for detecting chemicals in the water, specifically chemicals are given off by injured prey animals- feeding stimulants. Humans use our noses and mouths pretty much the same way except we are detecting gasses released in the air.” 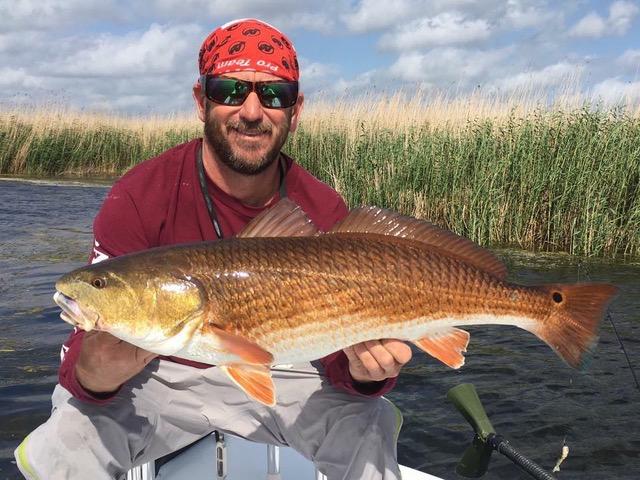 When asked how important is scent to a fish, Carr says, “You would first need to know if your target species hunts by scent alone or by sight or both.  Secondly, the scent is only part of the success story in fooling a fish.  Your bait should also have the flavor of the prey animal as well so that when a fish bites down, it gets the taste it’s expecting.  This dimension of the bait will decide if the fish tries to spit the bait out or inhale it.”

When advising anglers on the choice of Fishbites scented lures, Carr says, “Fishbites makes a variety of saltwater targeted flavor/scents. We offer these flavor/scents in a variety of colors and sizes of baits and lures that are sure to plug into almost any kind of saltwater fishing. For lure anglers, we recommend using our Fishbites Fight Club lures or our hybrid Bob’s Your Uncle Scented Bait Strips. Each of these lure products offers a power flavor/scent combo, but also provide a lot of visual action that is sure to catch the eye of many apex predators down below.”

Finally, Carr says, “In almost all conditions where a shrimp-eating fish would be coaxed by a PVC (unscented) artificial shrimp lure, adding scent would up your game by an order of magnitude. Again, it’s not just about the scent alone, but the flavor that will associate with that scent. If the two don’t line up, you run the risk of losing the strike because the fish spit out your lure.”