Diesel pickup trucks are a common site in the driveways and garages of many people who love fishing, hunting and otherwise connecting with the outdoors. Their towing ability and torque generally exceed regular gas engines, and that’s what makes them so popular with folks that pull boats and tractors. Their increased torque and towing capacity are primarily due to turbochargers that increase an engine’s efficiency and horsepower by delivering more air to the cylinders during the intake cycle. How do turbochargers accomplish this power boost while increasing fuel efficiency? By forcing more air into an engine’s cylinder, turbos supply more oxygen for each cylinder while also creating turbulence in the fuel mixture for better combustion. Thus, a turbocharger produces a boost in power and torque while burning cleaner with the potential to use less fuel. In order to maintain the efficiency and horsepower of their engine, diesel owners need to be able to identify bad turbo symptoms in order to maintain their engine properly.

A History of Turbochargers: What Does A Turbo Look Like

Although some engine builders began experimenting with increasing airflow for diesel engines in the late 1800s, it wasn’t until 1905 that turbochargers became a reality. Although Swiss engineer Alfred Buchi received a patent for an exhaust-driven compressor that forced more air into a diesel engine, it took him 20 years of tinkering before he could produce a reliable working model.

It was about 1925 when Buchi attached the first successful exhaust-gas turbocharging system to an engine and achieved a power increase of about 40 percent. These early units were referred to as turbosuperchargers because all forced-induction devices were known as superchargers back then.

Coupled with advances in metal and bearing technology, these early devices were initially attached to large marine diesel engines. However, experiments with aircraft engines led to the successful incorporation of turbos on several airplanes before the end of World War 2. 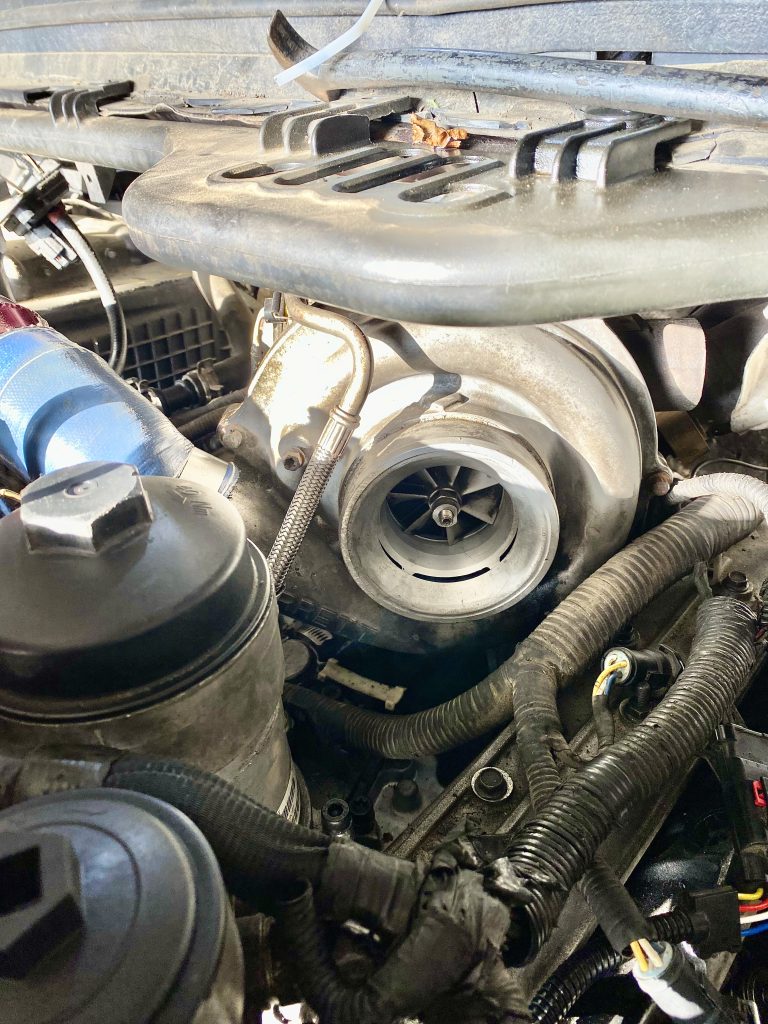 Over time, diesel turbochargers have become more compact and reliable.

With improved designs and better alloys, turbochargers became more compact and reliable, leading to their use on smaller, higher-speed engines. However, even though a few trucks were built with turbos, it was not until 1954 that Volvo introduced the first production vehicles with turbocharged diesel engines.

The newly developing Interstate system in the 1950s spurred renewed interest by many major engine builders, and within a couple of decades, most began offering a turbo option for their semi-trucks. Unfortunately, many drivers came to view those early options as less reliable with only minimal fuel savings. However, the oil crisis of 1973 led to still more advances, and by the 1980s, emission concerns cemented the widespread acceptance and nearly universal use of turbos on most all large trucks.

Dodge was the first U.S. automaker to offer pickup trucks with a turbocharged diesel engine in 1989 when it introduced the 5.9 Cummings. Ford and Chevrolet soon began offering models in their lineup, and today, every major manufacturer offers a variety of diesel options for their light and heavy-duty trucks.

For several decades larger ocean-going fishing boats have used a turbocharged diesel engine to power them through salt and brackish water. However, in the past decade, there have been several innovative turbocharged engines that have also joined the outboard market. With higher torque and lower operating rpm, these new motors offer several significant advantages and range from 50 to 300 hp.

Since turbochargers seem to be attached to almost every engine that burns diesel fuel, it might be a good idea to figure out if they need any maintenance or special care.

Estimates indicate that 90% of turbocharger failures result from ingesting a foreign object or poor maintenance. Any trash or debris that makes its way into a turbo intake will damage, if not destroy, a turbocharger. Faithfully cleaning/changing your air filter and engine oil according to the manufacturer’s instructions is the best way to prevent such a disaster. 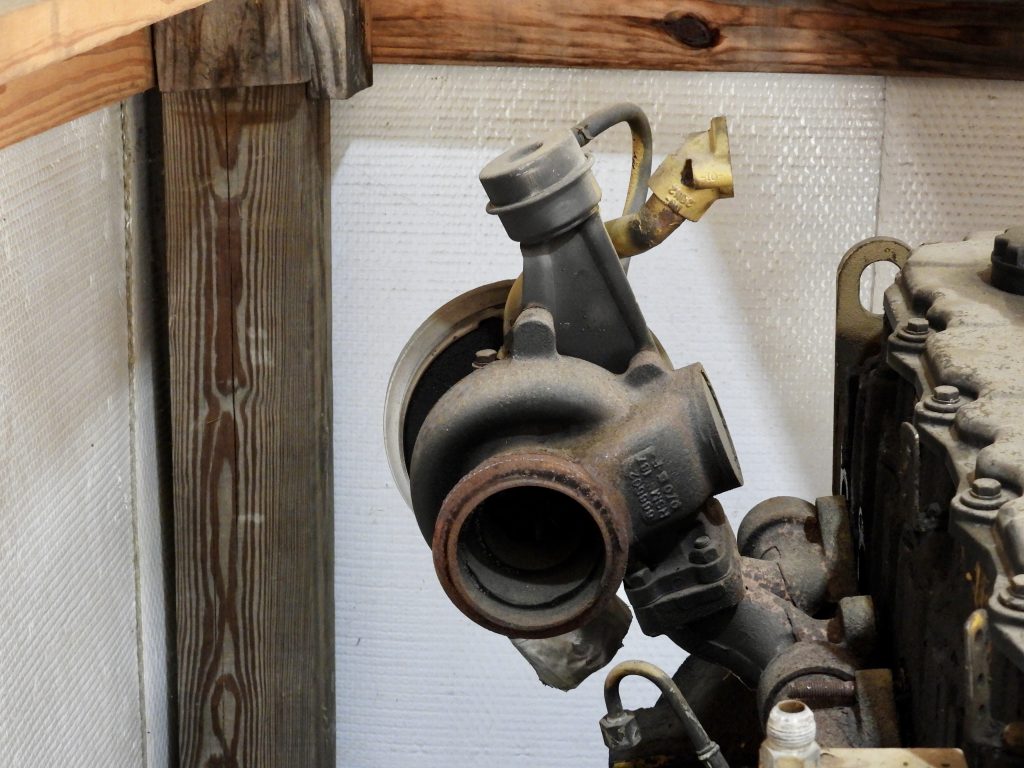 Being able to identify bad turbo symptoms is key to maintaining your diesel engine and can save you from having to replace it or having it rebuilt.

Clean filters can also prevent the loss of air pressure, which can create a vacuum at the turbocharger’s compressor oil seals, and if the pressure drop continues over time, it can affect those seals and cause a leak. Likewise, maintaining clean engine oil is vital to the life of both engine and turbo since they share the same oil.

Another good turbo tip is to let your engine idle for a minute or so after it’s run hard. This enables the turbocharger to slow down and cool off. Seasoned drivers who practice this often neglected procedure know that it can pay dividends over the life of the equipment.

How Often Do Turbos Need To Be Replaced

I talked to Ted Raby at Test-Calibration and asked him to explain the inner workings of a turbo and how to maintain and check for any bad turbo symptoms that could lead to premature failure.

Raby said that a single shaft connects two finned units. One sits inside a housing that vents the exhaust flow, and the other fins are inside the intake and act as a compressor to force air into each cylinder on the intake stroke. He said their bearings ride on a thin layer of oil, and maintaining clean oil and air are the keys to a turbo’s longevity.

“Turbochargers, theoretically, should last the life of an engine,” Raby said. “Because the turbo uses the engine’s oil for lubrication, an owner should check their engine oil regularly because it’s the lifeblood of any turbo.”

Raby noted that periodically inspecting and changing your engine air filter and using the correct engine oil, and replacing it according to the prescribed schedule is the best turbo maintenance. He said that as long as an engine doesn’t develop any internal issues that might contaminate the oil and the correct viscosity and change intervals are adhered to, it should not have any problems.

Raby discussed a few bad turbo symptoms or indicators that something might be going on with an engine’s turbo.

“If you notice excess exhaust smoke, experience reduced engine power, or an increase in fuel consumption, it might be time to take a close look at your turbo for any signs of excessive play in the shaft,” Raby explained.

Raby said the technicians at Test Calibration have the latest equipment and expertise to quickly diagnose any issues a customer might have with any of their turbo-powered diesel engines.

The widespread use of Diesel engines in trucks, tractors, inboards, and, more recently, outboards has been made possible by bolting turbochargers onto these engines. As a result, it has played a strategic role in decreasing engine size and weight while increasing its power-to-weight ratio.

If you follow the maintenance recommendations in your owner’s manual, you can expect years of good service from almost any turbocharged diesel, no matter where it’s mounted. But, if you suddenly see bad turbo symptoms like more exhaust gas in your rearview mirror, or notice a loss of power, give Ted Raby a call at Test Calibration for a quick diagnosis, and if you are within driving distance to Mobile, stop by and let them take a look.

They service most of Alabama, Mississippi, Florida, and parts of Louisiana, and can offer you tons of professional advice about your best options if you ever have an issue with your turbo Diesel engine.