Summertime fishing options offer shorebound anglers a myriad of species and locations. The compact area (30 miles) from the Florida State Line westward to Fort Morgan provides something special for just about any fisherman, local or visitor, experienced or novice. So much about beach fishing and pier fishing success is knowing the options of where to go, when to be there and what to tie onto your line.

A wide variety of public access venues are scattered intermittently along the coast of Baldwin County. Many simply offer the public access to get the beaches with few or even no amenities. But some, like the Gulf State Park venues are truly “gems” of the Emerald Coast.

Stretching across 6,500 acres of coastal dunes, lakes, marsh and forestland the main body of the Gulf State Park also offers anglers beach fishing and exploring along two miles of Gulf.

In addition, the 1540 foot long Gulf State Park Pier is one of the longest on the entire gulf coast, and boasts “2,448 feet of fishing space along the rails”. It is 20 feet wide and 20 feet above the water, with two fishing platforms outside the longshore sandbar. Just about any of the hundreds of species of fish that swim in the nearshore waters of the gulf have been hooked there, and LOTS of them at times. Plus the extensive “turtle-friendly” night lighting offers 24 hour fishing access to beat the heat, if the weather is too hot during the day. There is even a bathroom and shaded breezeway on the middle platform to allow anglers and walk-on visitors a respite if need be. And it has a fish cleaning station, fresh water spigots, electrical outlets, benches, a snack bar, tackle shop and even a pier side restaurant for their convenience.

But the fishing is the big draw for the pier, and over a half million people visit yearly since it was opened in 2009. During the summer months a plethora of fish species provide anglers hours and hours of fun and quite a few meals too. Spanish mackerel are probably the most sought after species. Most of the these “spotted speedsters” are in the one to two pound range, but they commonly exceed three pounds. They come equipped with razor sharp teeth and an innate ability to bite a lure or bait and run away so quickly, an unprepared angler might not even get a good look at it. Essential equipment for pier anglers includes a wide brimmed hat and polarized sunglasses to shade their eyes and get better viewing into the water. Sunscreen and water are good ideas too! They also will need some sort of de-hooking device or needle-nosed pliers, and 30 or 40 pound clear monofilament line for leader material to protect their lures from getting bit off by sharp mackerel teeth.

King mackerel are also a very much sought after species on the pier, though not nearly as plentiful as the spanish. Most are hooked from the end octagon by anglers employing one of several methods. Live bait fishing is very popular from the end of the pier and that method doesn’t require expending a lot of energy. The angler simply catches a scaled sardine (locally called an “LY”) or other small live baitfish, and lets it do most of the “work”. The angler puts a larger hook in the baitfish, attached to an 18 to 24 inch long steel leader to ward off the sharp teeth of the larger mackerel. The bait is then cast out and “free lined”, or “free floated” or even “trolled” into the likely strike zone.

Other methods of catching king mackerel (especially the smaller “schoolies”) is by “snobbling” frozen cigar minnows or casting medium to large sized plugs. 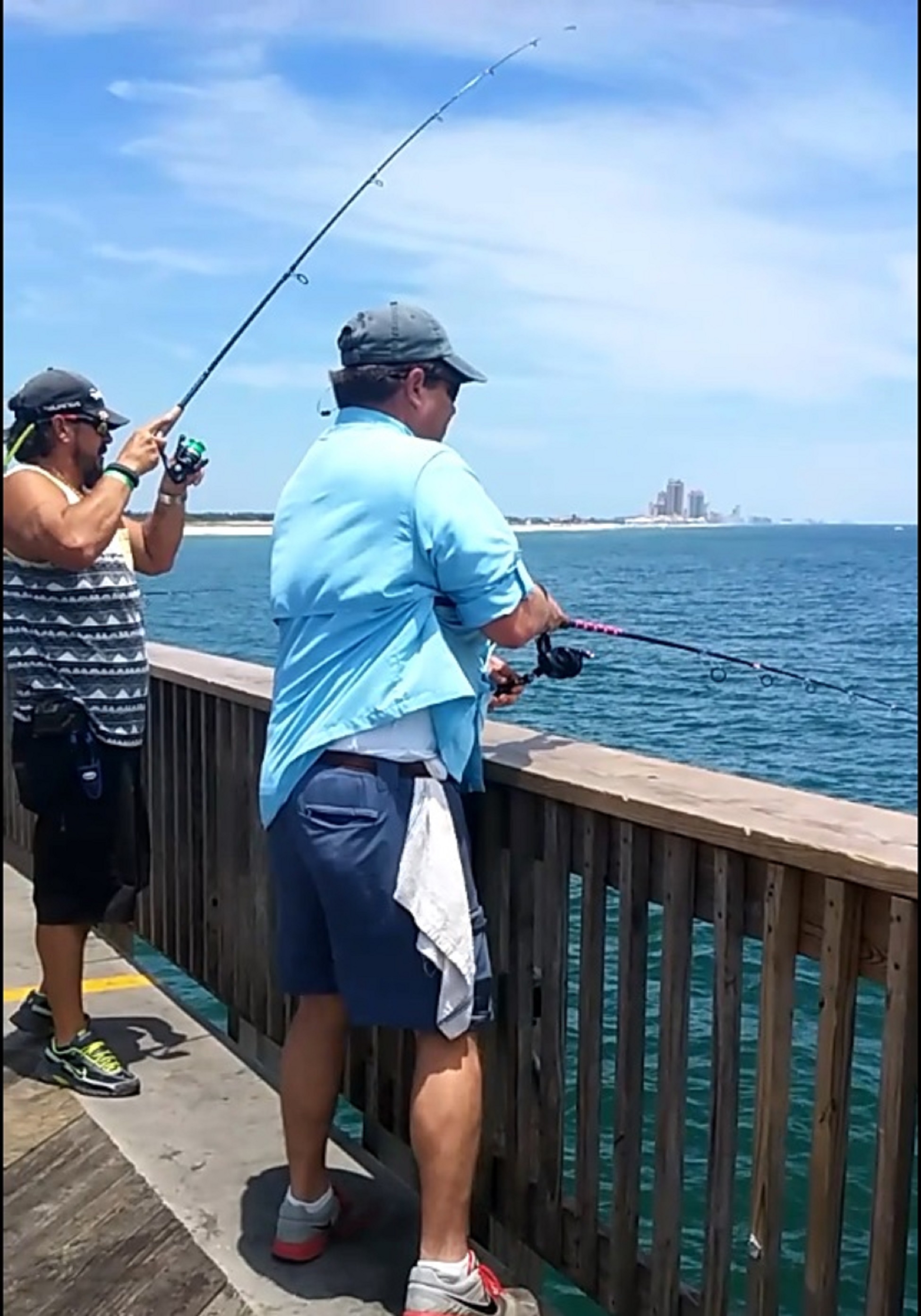 Many different species of fish can be caught right from the pier.

But double digit weight king mackerel are 10 times bigger and stronger than their spanish cousins, and just about as fast. Sometimes at the strike they run so fast the trailing line cuts through the water leaving a vapor trail of bubbles, lending to their nickname as “smokers”. That first run can be a long one too, sometimes 300 yards. So it’s a good idea to have about that much 15-20 pound line on a reel with a smooth drag. The rod should be medium heavy power with a fast action tip for throwing the lighter baits and capable of getting good casting distance (50-70 yards).

But midsummer is prime time for the ‘king of kings’ on the Gulf State Park Pier, the Alabama State Saltwater fish: Atlantic tarpon. These are strictly gamefish in Alabama, and nowadays a $61 Tarpon Tag is required to harvest one. Still, many are hooked incidentally (or intentionally) every summer from the pier, as well as while beach fishing; mostly in July through early August. Many of the tarpon hooked are on live bait intended for mackerel. But they also strike artificial lures. And the large plastic paddle-tailed swimbaits are a very popular and effective lure for tarpon.

Most tarpon get off by themselves, either during their acrobatic leaps from the water, long runs or simply breaking the line. Most anglers fishing equipment is simply not up to the rigors of fighting a fish that commonly exceeds 100 pounds. Occasionally an angler keeps the fish on throughout the fight (which may be hours), and intentionally ‘breaks off’ the fish at the pier. This counted as a ‘coup’ of sorts. Only rarely are these magnificent gamefish actually killed from the pier. But the venue offers “once in a lifetime” opportunities to hook one.

Other large fish catches include the popular red drum and jack crevalle. Both species are common catches from the pier in summer and often occur in large schools. When a “jack attack” or “bull red blitz” occurs on the pier, anyone wishing to hook one only has to throw out a bait or lure. And there is even an opportunity to fish for sharks (two nights a week) during most of the summer.

However the vast majority of fish hooked from the pier are much smaller and much less glamorous. Throughout the summertime, the common species of jacks provide endless hours of fishing entertainment to thousands of anglers with little or no saltwater nor beach fishing experience.

Blue runner (called “hardtail”) and ladyfish (called “skipjack”) are two very numerous species that can be caught on even light tackle (6 to 12 pound line). And they are very sporting to catch on commonly used ‘freshwater’ tackle suited for bass or walleye.

These fish (plus spanish mackerel and bluefish) strike a wide variety of natural baits and artificial lures; pretty much anything that moves. But one of the most popular and effective lures is the locally made ½ ounce leadhead jigs called “Looney jigs”. They are very durable and cost much less than hard baits and Gotcha plugs.

Of these venues, the Pavilion and Alabama Point East have much more room for anglers to find a quiet beach for a few hours of fishing in the early mornings and afternoons after 5pm. There can be a LOT of swimmers in the water during the middle of these summer days. Plus the predominant hot, sunny conditions are not very conducive for beach fishing.

Besides the gulf beach and the beach along Perdido Pass, the Alabama Point East park has relatively easy access to the east jetty and weir. A great place for fishing, snorkeling or to just relax and watch the waves, the bird life and the boats.

The City of Orange Beach maintains the parking lot under the west end of the Perdido Pass bridge. This popular spot allows anglers to park and walk just a few feet to the seawall overlooking the north side of Perdido Pass. Also the lot is well lit, so at night there is pretty good beach fishing as well. A great way to beat the daytime heat! There anglers can cast plugs, spoons and jigs for a variety of saltwater species such as bluefish, ladyfish and mackerel. The wall is about five feet above the water though, so a long handled landing net is a handy tool to aid anglers from losing bigger fish.

But most of these are marked as ‘NO FISHING’ areas (around the lifeguard towers) and considered “swimming beaches” during the summer months. Only Little Lagoon Park (three miles west of Hwy 59 on West Beach Boulevard) offers full time beach fishing. Consequently, this is a popular spot, and the parking lot (pay to park) often stays full during the mid-day hours. Finding a place to park there is generally not nearly as difficult in the early morning and late afternoon hours. Besides fishing is much better at those times anyway this time of year. The parking lot has a covered bathroom, vending machines and outdoor showers to rinse the sand and salt off.

During the summer months, anglers might fish in the gulf on either side of the seawall cut, or from it. Castnetting, crabbing, and snorkeling are popular pastimes at this venue as well as wadefishing. Anglers catch a lot of ladyfish here, but bluefish, redfish and speckled trout are common catches too. On the Lagoon side, anglers can wade along the edge of the pass and cast live bait or plugs for speckled trout, redfish, flounder and even spanish mackerel. And there is even a pier in the Lagoon a couple of hundred yards east of the parking lot that offers easier access to these fish.

The Fort Morgan peninsula (west of Gulf Shores along Highway 180) has several public access venues to the west end of Little Lagoon and the gulf beaches to the south. The Jeff Friend Trail (about six miles west of Hwy 59 on Hwy 180) is a kayak launch and nature trail that can put you on some fine wade fishing for speckled trout, redfish, flounder, and more along the northwest shore of the Lagoon.  And Pine Beach Trail a few miles farther west, offers more of the same at the west end of Little Lagoon as well as access to Gator Lake. Yes, it is named that for a reason!

Public parking at the south end of Mobile Street (nine miles west of Gulf Shores along Hwy 180) can provide beach anglers with access to two miles of undeveloped shoreline in the Bon Secour National Wildlife Refuge. This is a popular location for surf casters trying their luck at beach fishing for pompano and redfish. Wade fishers can plug for a variety of fish species including speckled trout, bluefish and ladyfish. Better get there early though, because the small parking lot (free) can fill up quickly during the summer months.

Farther west, Burgoyne Road (formerly known as “No Name Road”) is just outside the boundary to Fort Morgan. It also has limited parking and amenities, but does offer public access to the gulf beach. The area provides plenty of room for surf casting, wade and beach fishing. Speckled trout, ladyfish, redfish and bluefish are common catches, and even sharks and spanish mackerel can be caught there.

Anglers walking westward from the westward end of Highway 180, can access Fort Morgan Point. Though remote, this is a very popular fishing location. Mainly because it is situated at the end of the peninsula where Mobile Bay meets the Gulf of Mexico. This venue offers fishing for sharks of various sizes as well as ‘bull” reds and jack crevalle. All large, hard-fighting fish that require heavier tackle.

So it is easy to see the Baldwin County may occupy a relatively short distance along the gulf coast. But it offers a LOT of beach fishing and pier fishing options for the summertime anglers in such a small area.