Below the Dams | Great Days Outdoors

Tailrace Fishing Is Not for the Faint of Heart

I’ll admit it. I’m just a little bit nervous on this fishing trip. No, let me be honest here. I’m a lot nervous. I’m sitting in the back of Capt. Brian Barton’s boat and we’re tied up to a bollard on Wheeler Dam.

The very powerful currents of the water being released through the massive dam are lifting and dropping the boat in a very impressive manner. The many warning signs on the dam structure cautioning boaters about sudden and dangerous water releases don’t inspire confidence, either. The fact that boaters are required to wear personal floatation devices at all times when close to the dam makes me just a little skittery, too.

There’s no doubt about it, fishing the strong, powerful, and let’s again be honest, dangerous waters below any big electric power-generating dams in Alabama focuses any normally cautious angler’s attention remarkably. However, when I toss my jig into the mixed line of water where two strong currents meet and mingle, I feel the almost immediate strike and run of a fish that is using the current to its advantage.

At this point, there’s not much for me to do except hold on, let the drag do its job and hope that my gear is up to the task at hand. My hooked fish might be a smallmouth bass. Some world-class smallmouth live below this particular dam. It could be a big spotted bass or even a largemouth. It could be a hybrid striper or even a very big striped bass. Heck, it could even be a hungry catfish of very large size.

As it turns out, my fish came to the surface and made some great powerful jumps in the fast water. Catching this 3-pound tiger-striped smallmouth bass was a blast in the current below the dam. Captain Brian’s fish that he hooked at the same instant that I hooked my first fish was a strong, fat white bass that gave him and his spinning rod a real workout.

That’s the thing that makes the nervousness of approaching and fishing any of the dams on Alabama rivers most exciting. You never know what is going to come play. I also noticed that I was not feeling nearly as nervous about fishing the strong water below the dam as I did just a few minutes earlier. Big fish almost always have that effect when they come to play. 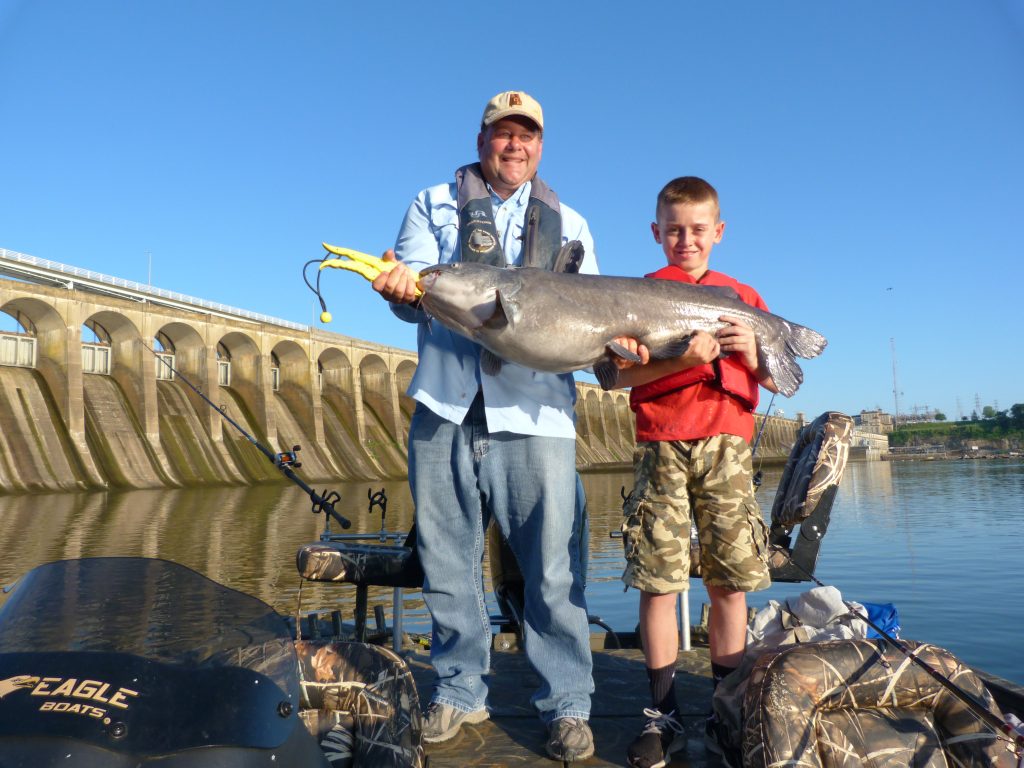 Capt. Brian Barton puts his charter client on some massive catfish below the dams. Photo by Ed Mashburn

Rule One: Know What You’re Doing

Of all the places in Alabama to fish that anglers should not try on their own with no previous experience fishing, below the big hydropower dams are the places. When the dams release water, the currents immediately below the dams become churning, rolling, very powerful mixtures of moving and still waters. Although experienced guides and anglers like my friend Brian Barton and his son Andrew fish these waters on an almost daily basis with confidence in their ability to navigate the strong waters safely, even they have great respect for the tailrace waters below the dams.

Brian Barton says, “Fishing below dams is very dangerous, especially during times of peak generation. The Tennessee Valley Authority dams along the Tennessee River require that boaters wear life vests at all times when fishing within 800 feet of the dam. Keep in mind to make sure your life vest is rated at least 50 pounds more than your body weight. An angler drowned below Wilson Dam a few years ago even though he had his life vest on and worn properly. When he fell out of his boat and his cotton clothes became waterlogged, it exceeded the capacity of the vest. When cotton clothing becomes wet, particularly wintertime clothing, it adds weight to your body very quickly.”

Andrew Barton adds, “Not all Alabama dams are created equally. Some are harder and more dangerous to navigate due to shallow rock piles and other obstructions. The better places to fish are areas of multiple eddy pockets, wing dams, rock piles, both deep and shallow and variety of water depths.”

In other words, for best fishing success below the big dams, anglers need to get close to the dangerous underwater stuff, but not too close. When the boat starts to grind on rocks and the lower unit of the outboard impacts solid material, you’re too close and are in danger. The best advice for anglers who want to experience the great fishing below big dams in Alabama is to spend some time fishing with a guide or experienced local angler who knows the water and the hazards.

The Main Targets for Anglers

It would hardly be worth the effort and danger to fish below the big dams if the kind and quality of potential fish to be caught were not so great. Basically, any kind of fish that lives in the lakes will congregate in the fast, moving water below the dams.

Captain Brian Barton tells us, “Fish stay below the dams all year long. Typically, your largest numbers of bass, stripers, white bass and catfish are in the spring and late summer to early fall. In the spring, fish are making their spawning migrations. In late summer and fall, huge numbers of newly hatched shad school at the base of the dams and this creates a feeding frenzy for all fish. Typically, the bite is better early in the morning or late afternoon. The most important factor is the presence or absence of current. Current pulls bait close to the dam and stimulates game fish to feed.”

According to Captains Brian and Andrew Barton, all game fish in the lakes below the dams congregate at the dam at some point in the year. In the spring, white bass arrive first, usually in mid to late March. The big stripers, smallmouth and largemouth bass usually start showing up in large numbers in April. The catfish peak is usually May and early June. Everything is dependent upon the timing of the shad arrival. The timing of the shad, the primary food source for all lake game fish species, is determined by water temperature and current flow. In years with above normal rainfall in late winter and early spring, the fishing below the dams tends to be better. 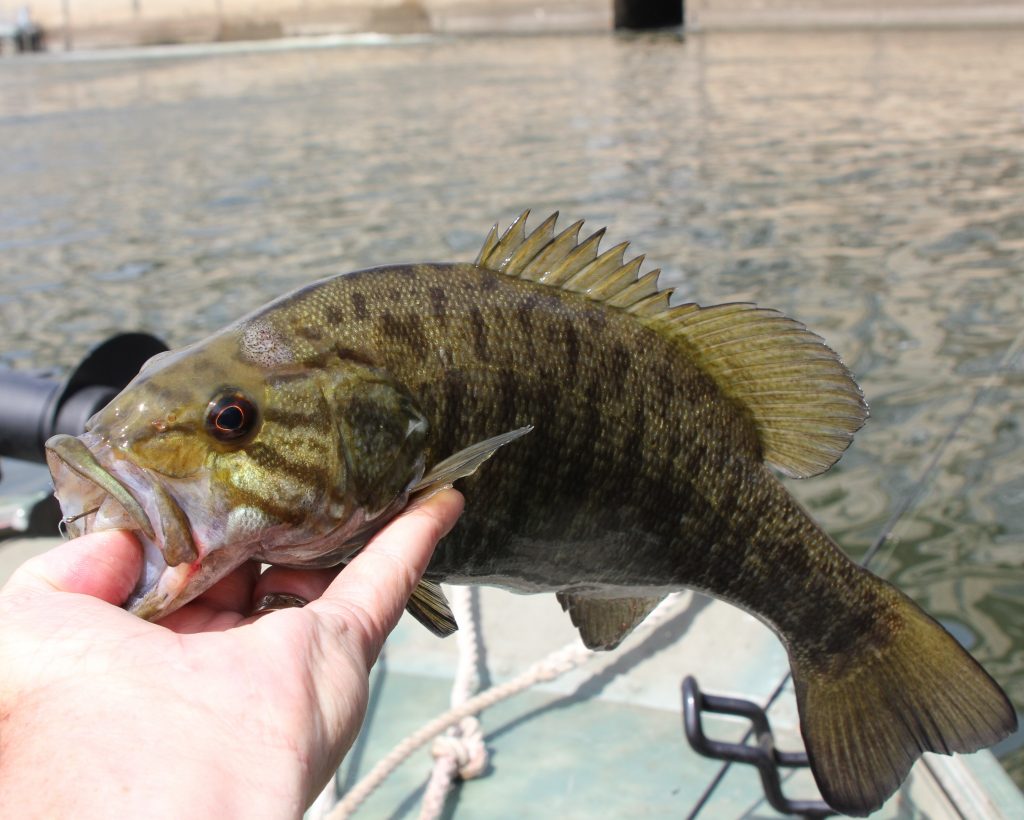 Some gorgeous smallmouth can be found below the Tennessee River string of dams and they are a blast to catch. Photo by Ed Mashburn

Go to the Bank

Although many anglers prefer to work the fast water below the big dams from boats, and this does allow maximum flexibility in choosing spots to fish, shore-bound anglers are not left out at all. In fact, some great fishing below dams can happen for bank anglers.

Captain Brian says, “Bank fishing below dams can be excellent under the right conditions. Fish of all kinds align in eddy currents along the banks. If you can find a rock point or wing dam that juts out horizontally from the bank creating a slack water area, you have found the jackpot. At night when the current cuts off, big flathead and blue catfish come out from their hiding places around the dams to cruise the shoreline in search of forage. Big bluegill will spawn in calm pockets off the edge of the tailrace in the spring and summer.

Once when fishing from the shoreline below a big dam, I was having a ball catching white bass that were holding in a big eddy created by water released from the dam turbines. These 2- to 3-pound bulldog white bass were just about all I could handle on my medium-weight spinning gear as they used the strong current to their advantage.

I made a long cast to the face of the dam and I let my white 1/4-ounce jig sink about six feet. When I started my retrieve across the fast current, something much, much bigger than the white bass I’d been catching made a violent strike. Line began melting off my reel. As the line hissed through the water, I saw a broad tail and a thick, massive side with black stripes on the silver background as it rolled on the surface.

This striper was something around 30 pounds and I did not have a chance of landing this massive, powerful fish. This striper ran and ran. When it reached the end of my line, the line popped. As far as I know, that big striper is still running, but that was a lot of fun while it lasted. I love fishing below the dams from the shore because it’s so easy to access and the fish will almost always be there for me to work.

Let’s Cut to the Chase

For anglers who are just starting out learning to fish the massive Alabama dams and the fast water below them, selecting the better spots to fish can be confusing to say the least. A lot of water pours through the dams and it can all look a lot alike.

“I catch more than half my total number of catfish and smallmouth bass each year within a half-mile downstream of a dam.” — Brian Brian, fishing guide

Both Captain Brian and Andrew advise anglers to look for places where different flows of water come together. They say for anglers to search out current seams. Fish tend to stack up in seams where two or more turbines meet. Bait gets pushed into these areas making it an easy target for game fish. Also, rock piles always hold fish. Look for fish to be behind rocks during peak generation. When the current is off, fish tend to position themselves along the top and front of the rock piles.

Anglers also need to look for blowdown trees. Fish will get behind a tree lying in the water where they can hide and wait to ambush prey.

Captain Brian says, “I catch more than half my total number of catfish and smallmouth bass each year within a half-mile downstream of a dam. Dams are without a doubt my favorite places to fish. About 75 percent of my guide trips start out below a power-generating dam. Although dams can be very dangerous, they are excellent places to fish. Anglers should always respect the turbulent waters below dams and never get too comfortable when fishing or navigating below dams.”

Dams and Lakes for Tailrace Fishing

Although there are many dams and tailrace situations suitable for fishing in Alabama, we’ll focus on the two primary rivers – the Tennessee River of north Alabama and the Coosa River chain of dams and lakes on the eastern side of the state. These dams all present great fishing and they all demand considerable skills and caution.