Picking The Best Bait For Redfish

Picking The Best Bait For Redfish

February can be cold and windy along the northern Gulf Coast, but there’s still some good fishing available, especially for those who enjoy casting to individual redfish they spot first. Because frontal winds in winter come out of the north and northwest, they push water out of local bays to the lowest levels of the year, and this forces fish on the flats to drop into the remaining holes and channels. Find these refuges, armed with the best bait for redfish, and the action is often immediate and sustained, not only for reds but also for trout and sheepshead.

Not only that, but as the sun gets high on the days after the frontal clouds disappear, reds often push into the shallowest water, particularly on areas with dark mud or grass bottom, where the heat is absorbed better than on white sand. On these spots, their dorsal fin and the tip of their tails often peek through the surface, particularly if they tip to feed.

Getting at these fish requires a very shallow draft boat, kayak or a canoe. Find a spot with shoreline access and you can readily wadefish to the action, though you’ll need waders to ward off the chill. (Check out froggtoggs stuff—they make some very durable models at prices far lower than the premium brands).

Catching tailing reds can also be a casting challenge. The lure usually has to land several feet in front of them to avoid spooking them, allowing the fish to swim up to it, then give a slight twitch to trigger the bite. Scented lures like the FishBites Fight Club Fight’n Shrimp and the Z-Man Scented Shrimpz are among the best bets among redfish lures, or add a fresh-cut shrimp tail to a bare jig head in the 1/8 ounce class with a 3/0 hook. The DOA Shrimp can also be effective in these situations, a slow crawl usually does the job. And you’ll occasionally score a surprising strike with a topwater like Rapala’s Skitter V, as well.

Scented soft plastics on small jig heads do the job when reds are in the marsh country in winter.

In the potholes, the fish are much less sensitive so long as you stay well back from the hole, the fish are unlikely to spook. A jig with the tail of a FishBites Fight’n Shrimp or a fresh-cut shrimp tail dragged along the bottom is likely to pick up sheepshead, flounder, trout and redfish and sometimes all four from one hole.

It’s possible to locate some of these holes and cuts on the open flats by careful study of Google Earth views, particularly on the Florida side of the FloraBama Line where waters are generally clearer.

Nearly all marsh creeks leading to the bays in both Florida and Alabama waters have a few of them as well, but the water is too dark to see where they are via satellite views.  You have to ease up the creeks and cast ahead until you start getting bit, then anchor and go to work.

Mississippi Sound has lots of likely candidates; Bayou La Fourche, Bull Bay Bayou, Bayou Bubie, Bayou Caddy, Bayou Sullivan and many others that produce, not only in the main Bayou, but far up the little creeks that let off them. West Fowl River, Fowl River and Deer River, all on the west side of Mobile Bay, are also worth exploring, as are the Magnolia River, Fish River and Bon Secour on the east side of the bay.

Don’t hesitate to go well up even creeks barely wide enough for your boat.  If there’s a three or four foot deep hole on a bend up there in the marsh, there are likely to be fish in it at this time of year. (Of course, the smaller the creek the quieter you have to be in getting close to the holes and a kayak or canoe with paddle or push pole is better than a skiff with an electric motor.) 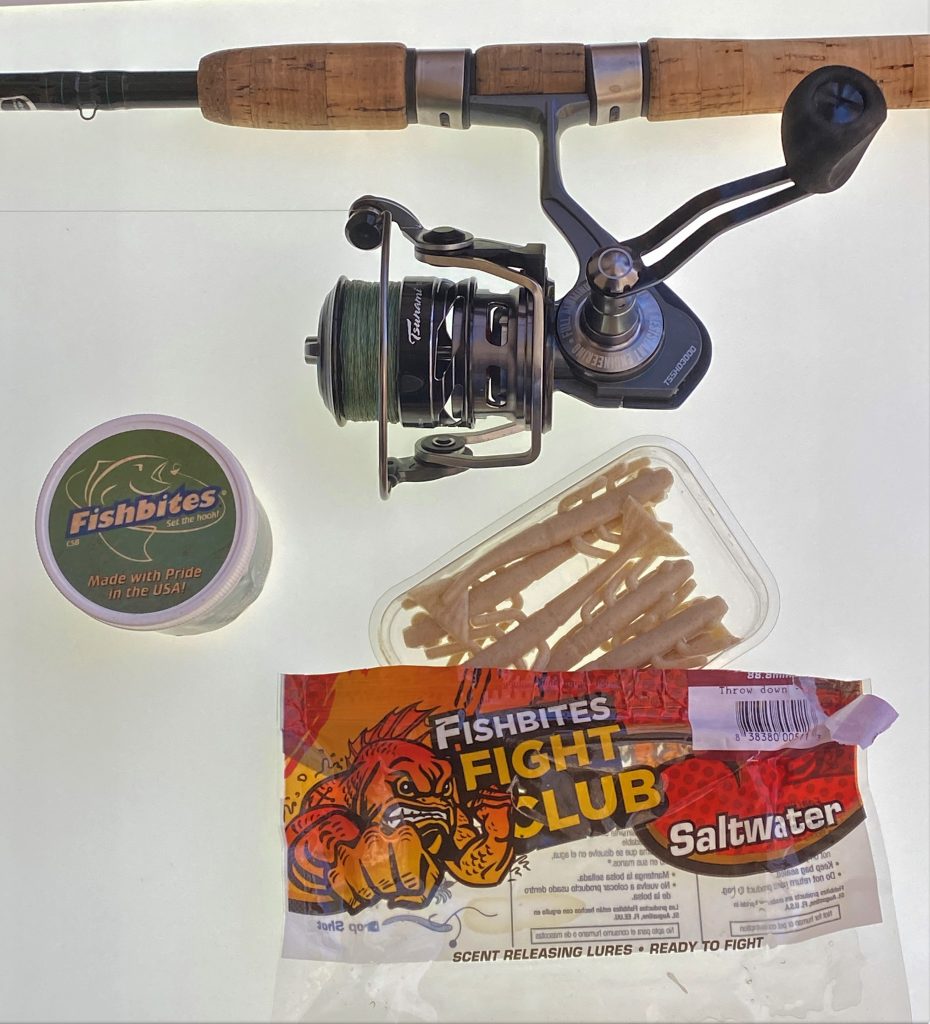 The FishBites Fight-Club Fight’n Shrimp puts out a powerful scent to lure reds from considerable distance anywhere current is moving.

While this sort of exploration means you’ll hit a lot of dry holes before you find one that’s “live”, you may sit in one spot and catch a dozen nice reds and trout from a hole about the size of the average suburban bedroom when you hit it right and these places tend to reload regularly on fronts that arrive later.

Tides are of course minimal on the northern Gulf Coast, but they’re enough to affect movement of fish in the backcountry.  On a high falling tide, you can sometimes sit at the mouth of a creek falling into a larger bayou and connect with reds waiting there for shrimp, killifish and crabs pushed out by the falling water. Lures that imitate these creatures are the best bait to use for redfish.

Bridges across the many bays of the northern Gulf are magnets for redfish pretty much year around. The pilings attract bait, and the bait attracts the reds.  Careful graphing with side scan or forward scan sonar can locate schools of these fish easiest, but if you don’t have the electronics you can also find them by trolling a big diving plug like the Rapala X-Rap Magnum 20, which goes down as much as 20 feet, up one side and down the other, as close to the pilings as possible.

Where you hook one fish, you can be sure there are others, sometimes dozens of them.

Once you know where the fish are, you can drop the anchor (quietly) and cast your redfish rig of scented baits to them on a half-ounce jig head, or use a live pinfish, grunt or croaker on a standard sliding sinker rig, with a slip sinker above a swivel running to a two-foot leader of 30-pound-test mono and a 3/0 to 5/0 octopus or circle hook.

On shallower bridges like the Dauphin Island Bridge, it also sometimes works to put the best artificial bait for redfish on a slip-cork rig, set to drop the bait down about four feet or so. This is then freelined with the tide so that it floats naturally through the bridge pilings, a deadly tactic that not only catches reds but also big trout.

FishBites Fight Club baits are a step up from most scent baits, which are designed to add a bit of scent to lures that primarily attract visually. The FishBites formula is such that you can literally fish the Fight’n Shrimp like shrimp for scent feeders like reds.

Put them on a 2/0 to 3/0 short-shank hook through the tail, cast them where you think the reds are likely to be, and let them set. If there’s moving water, redfish down-tide won’t take long to come calling.

The new Fight Club 5” Brawler Jerkbait is equally deadly rigged on a 1/8 to ¼ ounce jig head or a weighted widegap hook and fished with a rapid stop-and-go twitch.

Fight Club baits are infused with the same chemical compound as the original FishBites, and fish will eat them just as they would the real thing. 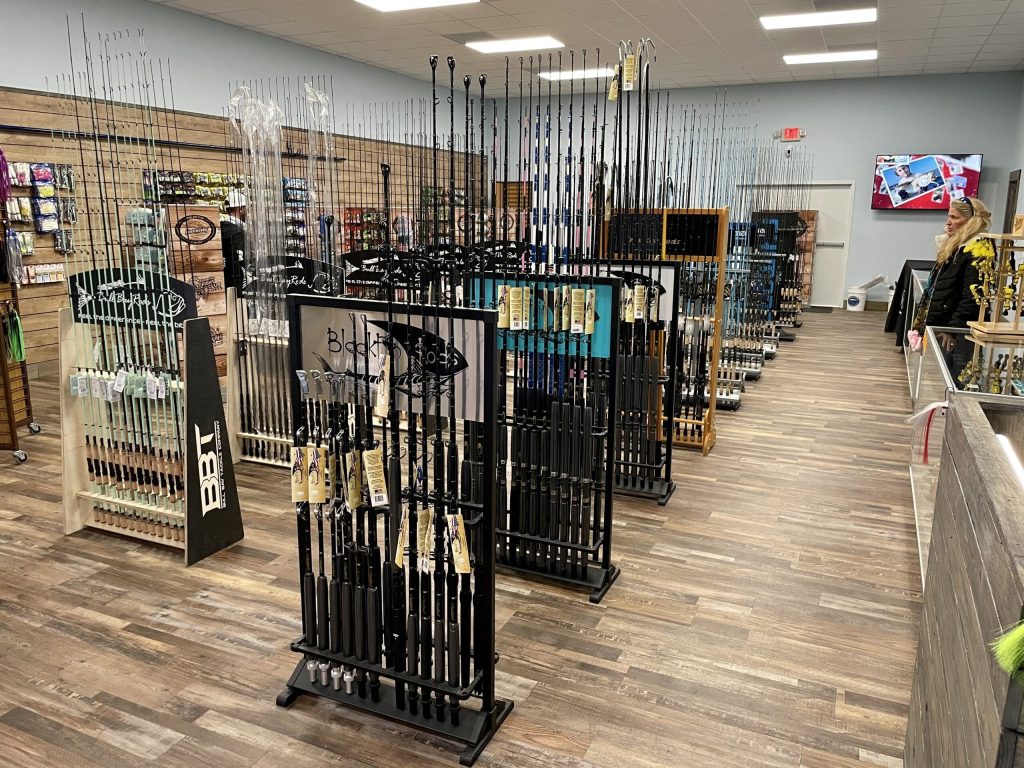 FishBites now has a well-stocked St. Augustine store that sells not only all their scented and flavored products but also all sorts of other gear anglers need.

For more than 30 years, Dr. Bill Carr, founder of the FishBites Company devoted his career to studying the feeding behaviors of marine species at the University of Florida. His pioneering scientific research methods led to his key findings about the chemical stimulants fish use to detect and track their prey.

Carr’s discoveries busted the myth of stink-baits, proving that there is little in common between what humans smell in the air and what fish detect in the water. He learned that odors that persist in the air don’t necessarily dissolve in water and become detectable or attractive to fish. Carr then focused on replicating these natural, nongaseous feeding stimulants in the lab, creating more refined and potent versions. FishBites is the result.

Not only did Carr unlock the scent component of the formula, he also unlocked the importance of the flavor. Fish might smell something interesting, but on tasting it, they might simply spit it out before you can set the hook.

Today, the company offers over 160 baits and rigs including Fishbites Fight Club® Lures, all made in the USA. The baits have been used to catch over 90 species of fish, and are must-have products for thousands of coastal, inshore and freshwater anglers. 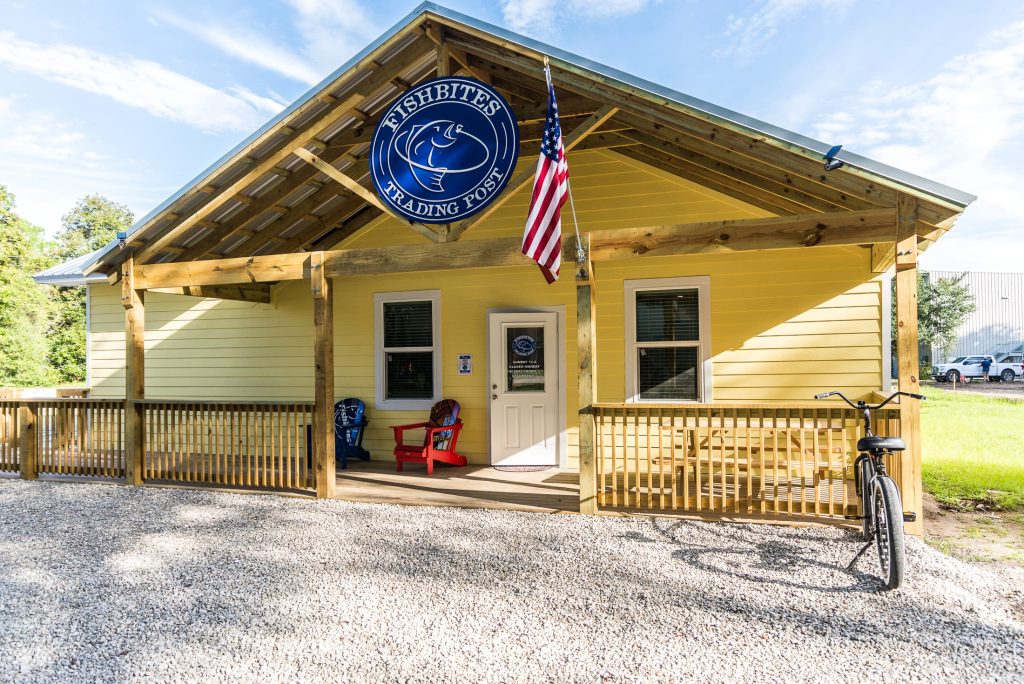 One of the huge advantages of FishBites over the natural bait it replaces is that it needs no refrigeration or special preservatives, and can be kept in your tacklebox for weeks, ready to go when needed. (The company cautions that storage in a hot car or direct sun can shorten the baits’ lifespan, however—for long term storage, it’s best to refrigerate them in the original sealed package.)

FishBites also has a retail store in St. Augustine, which is not only a great place to buy every possible variation of FishBites but also all sorts of tackle. The shop also holds regular fishing seminars on the open-air patio.