If all of us fishermen waited for bluebird skies and calm conditions to take our boats out, we would miss out on a lot of fishing. Most serious anglers have a good rain suit stowed away and have learned to endure the sudden change in weather conditions that often accompany a day on the water, but choosing the best bass boat for rough water is also key.

Those sudden changes can produce waves that rival their saltwater counterparts in the Gulf of Mexico, and drivers quickly figure out how far they are willing to run after those first few waves. Even rivers and smaller lakes can challenge a boat’s hull under the right conditions.

If you want a bass boat that can cruise through rough water and allow you to slice through whitecaps to get to those distant sheltered coves, then speak to a few seasoned tournament anglers and get their opinions. Anyone that competes on the professional bass circuit requires a boat that can perform in the harshest conditions, and even weekend fishermen can benefit from choosing a hull design that will slice through waves, curl the water back down, and keep you and the inside of your boat dry.

I made a call to Buck’s Island Marina, a family-owned business near Southside, Alabama. They have provided anglers, skiers, and recreational boaters with sales and service of new and used boats for more than 70 years. Since 1948 they have witnessed the evolution from the blunt-nosed flat bottom designs typical in the earliest B.A.S.S. tournaments to innovative hull designs borrowed from the boat-racing industry. I called Angela Britt, the service manager at Buck’s Island Marina, to discuss some of the characteristics to look for in a bass boat that allow it to handle the formidable waves that boaters sometimes encounter. 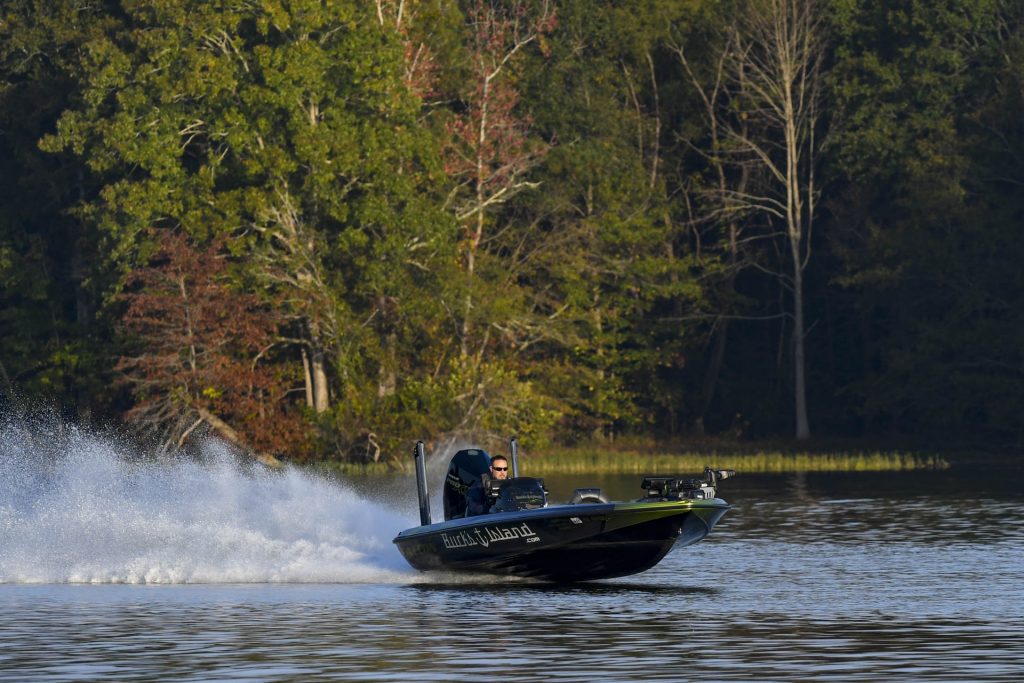 With the right bass boat, you will be able to fish no matter the conditions on the water.

I asked Angela if she would comment on some of the latest hull designs in bass boats that handled well in rough water. “I’m going to transfer you to Dan in marketing; he knows a lot about bass boats,” was her reply. Just a few sentences into our conversation and I realized that Angela’s statement couldn’t have been more accurate. Dan O’Sullivan wears many hats, but his passion for bass fishing is at the center of them all. Dan and several co-workers at Buck’s Island are seasoned anglers who have traveled extensively competing on the bass tournament trail. Dan spoke about why a well-designed hull can slice through rough water, the design features that contribute to their stability and ride, and the best small fishing boat for rough water.

The Evolution of the Bass Boat

Flat-bottomed aluminum boats with tiller-handled outboards and hand-controlled electric motors were the norm before Ray Scott founded the Bass Anglers Sportsman Society in 1967. The following year Forrest Wood began building his “Ranger” boats to compete with the early fiberglass offerings, and nearly all resembled the flat-bottom aluminum designs with tri-hulls and stubby-nosed fronts. Ranger, Skeeter, and Bass Cat were some of the earliest fiberglass brands and the innovations to their design, construction, and layouts are still ongoing in 2021.

In 1975 boat racing champion Earl Bentz joined the R&D team at Hydra-Sports. Bentz contributed design elements that he learned from winning nine National and two World boat racing championships. Bentz later resigned from Hydra-Sports and founded Stratos Boats. He later founded Javelin and then Triton, and in 2018, founded Caymas Boats. Many boat makers have adopted some of the design features introduced by Bentz in his lengthy career in order to work toward the best small boat for rough water.

Dan discussed the term deadrise and told me about some recent experiments Skeeter Boats carried out on Lake Pontchartrain, in Louisiana looking for the best deadrise for rough water.

“In 2019, Skeeter experimented with the deadrise on their FX line of boats. They increased the angle from 15 to 17 degrees and did extensive testing at Pontchartrain. They calculated there was a 32% improvement in the ride with those two additional degrees of deadrise. The result is the Skeeter FXR/ZXR line of boats,”O’Sullivan said. 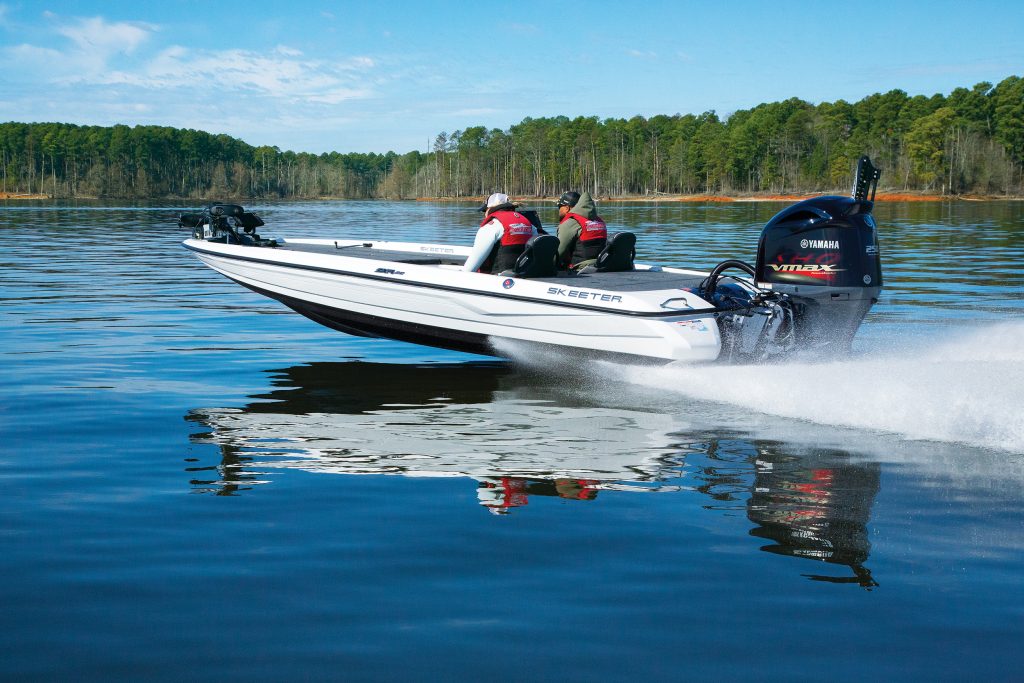 Deadrise relates to the design of the bottom of a boat’s hull. It is a standard measurement that helps determine how smooth and fast the ride will be, especially in choppy conditions. It is traditionally measured near the transom because only the rear 30-50% of a hull has contact with the water once it’s on plane. It is the degrees of angle measured across the bottom of a boat’s hull. The deeper the “V”, the softer the reentry impact; however, a flatter bottom has more stability and shallower draft. Some early offshore racing boats had over 24 degrees of deadrise and were designed purely for speed. Modern bass boats need a compromise between stability, draft, ride, and speed.

Problems can arise when conditions prevent adequate speed to lift the hull to full plane, and some designers use a “variable deadrise” from the transom to the bow to help address this issue. The amount of deadrise can vary by several degrees from the rear to the front, and it can help when the bow drops down after going over a giant wave.

Dan explained that, along with the best boat for rough seas, a boat driver needs considerable experience before feeling comfortable cutting across the more sizable waves. He mentioned that the trim buttons are a driver’s best friend, and learning to adjust the nose for a smoother ride takes a little practice. He added that having advanced bilge pumps, a 4-5 blade prop, and soft-ride seats benefit drivers in rougher conditions, but that driving skills are critical and only come with practice.

Buck’s Island Marina carries a complete line of boats made by Falcon, Skeeter, and Bass Cat.

“There are several of us on staff that compete in numerous bass circuits, and we helped choose these particular brands because we’ve fished them all and can personally verify the quality, ride, and comfort these boats provide,” O’Sullivan pointed out.

“I fish a Falcon F205 and can tell you that they have a rock-solid hull with a three-stringer configuration and four cross beams. It’s enclosed with closed-cell foam and has zero twist in the entire structure,” O’Sullivan added. “I can run hard over two-foot waves and cruise in the mid-70s in normal chop.” He said that switching to a 4-5 bladed prop and trimming the front down is sometimes necessary when fishing big water in rough conditions.

Often choosing a boat boils down to eye appeal, what you grew up fishing in, or what boat your friends fished.

An expert opinion ca be very valuable when picking out the right bass boat for your needs.

“We endorse every boat we sell and our staff of experienced tournament anglers knows that every model we carry will exceed your expectations for ride, comfort, stability, and safety,” O’Sullivan explained.

“We sell Falcon, Skeeter, and Bass Cat boats for the serious fisherman here at Buck’s Island, and sometimes deciding on a particular model is just a matter of personal preference,” O’Sullivan said. “Whether it’s a Falcon F205 or F215, the Skeeter FXR or ZXR, or a Bass Cat Cougar or Puma, I can assure you that the ride, stability and comfort will impress any fisherman, especially in rough conditions.”

If you are looking to trade up or purchase your first boat, and need some more information about your choices and what will be a good fit with your fishing style, make a call and speak to someone at Buck’s Island Marina. You can have the best boat design for rough water, that won’t confine you to fishing only in good weather and will carry you comfortably through water conditions that keep many boaters at home.