Selecting the Best Flounder Rig for Natural and Artificial Presentations

Selecting the Best Flounder Rig for Natural and Artificial Presentations

Flounder are a favorite target for Gulf Coast anglers due to their table qualities, but are notoriously hard to catch at times without the ultimate flounder rig.

They also hang around riprap rocks, piers and docks, oyster bars and creek mouths. In late fall, they swarm to the inlets on their way to spawn off the beaches. The spawning migration is usually triggered by cold fronts after Halloween, and sometimes hundreds of the flatfish head out the inlets all at once in November.

For years, this run was a target of savvy anglers, resulting in heavy harvest. Now, Alabama and other states have closed the season in November to protect these spawners and hopefully improve the fishery. 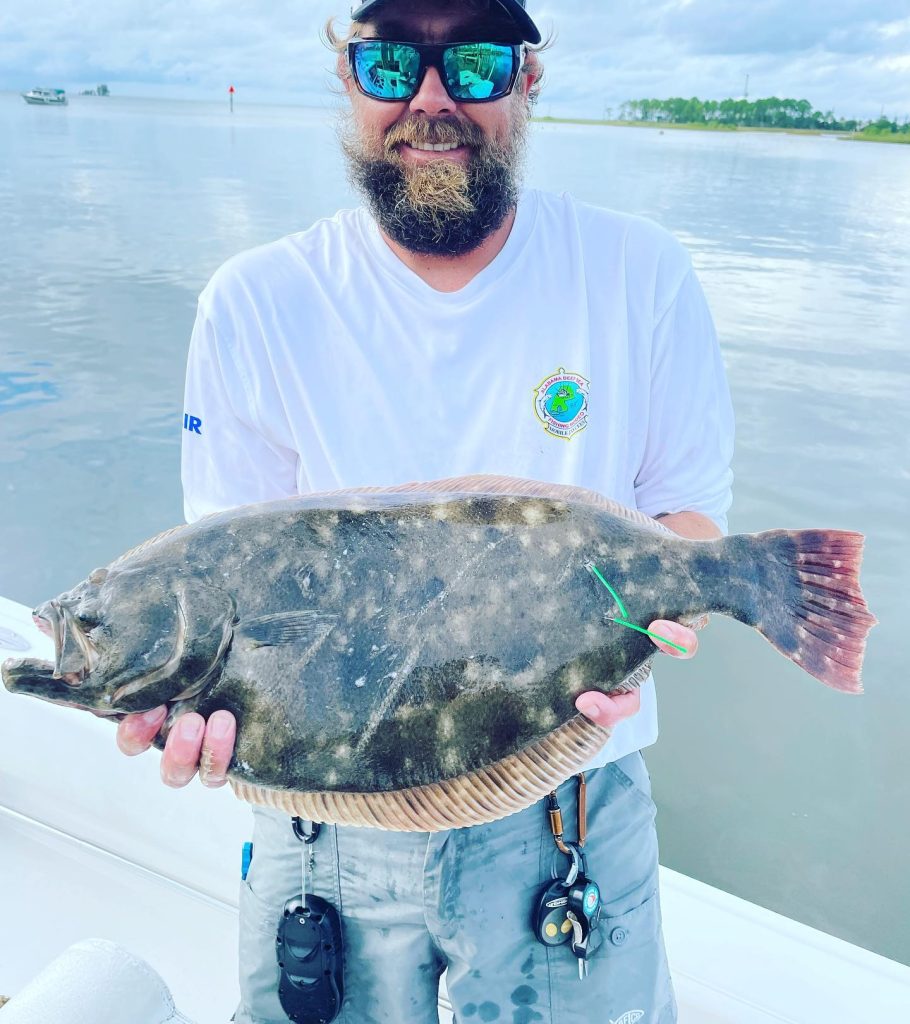 Both flounder species are often sight feeders lying in wait on bottom partially covered with sand or mud with only their eyes sticking out. When a baitfish or a shrimp drifts by, they lunge out and swallow it.

But they also readily hunt down fishy scents brought to them on the tide.

That means that live baits or lures with scent added boost the odds of connecting with a flounder dinner.

Captain Richard Rutland from Cold Blood Fishing is good at catching most of the species along the Alabama coast where he’s a well-known and respected inshore guide. In fact, he’s the go-to angler for the University of South Alabama when they need to capture fish for their research programs.

In recent years, he’s been heavily involved in catching, tagging and releasing flounder for the Flounder Tagging project run by the University’s Marine Sciences research program. The study is a response to the apparent reduction in flounder abundance on the Alabama coast in recent years.

Some of the fish Rutland has caught and assisted in tagging have been huge, with several over 6 pounds and a few approaching 10 pounds.

So far, the program indicates the big fish, and most adults, leave the bays and coastal rivers in late October into December and don’t return until summer. So prime time to catch them in those areas will be July until early November. (November is now a catch and release month for flounder in Alabama, however.)

The fish hang around inlets and river mouths, riprap channels, oyster bars, docks and other structure all around Mobile Bay, Perdido Bay and Mississippi Sound except when they move offshore to spawn in late fall and winter.

Rutland says the best bait for flounder changes with the season. In fall and early winter prior to the spawning migration it’s finger mullet, hands down.

He says throwing a castnet of the right size and design is essential in catching quantities of finger mullet. 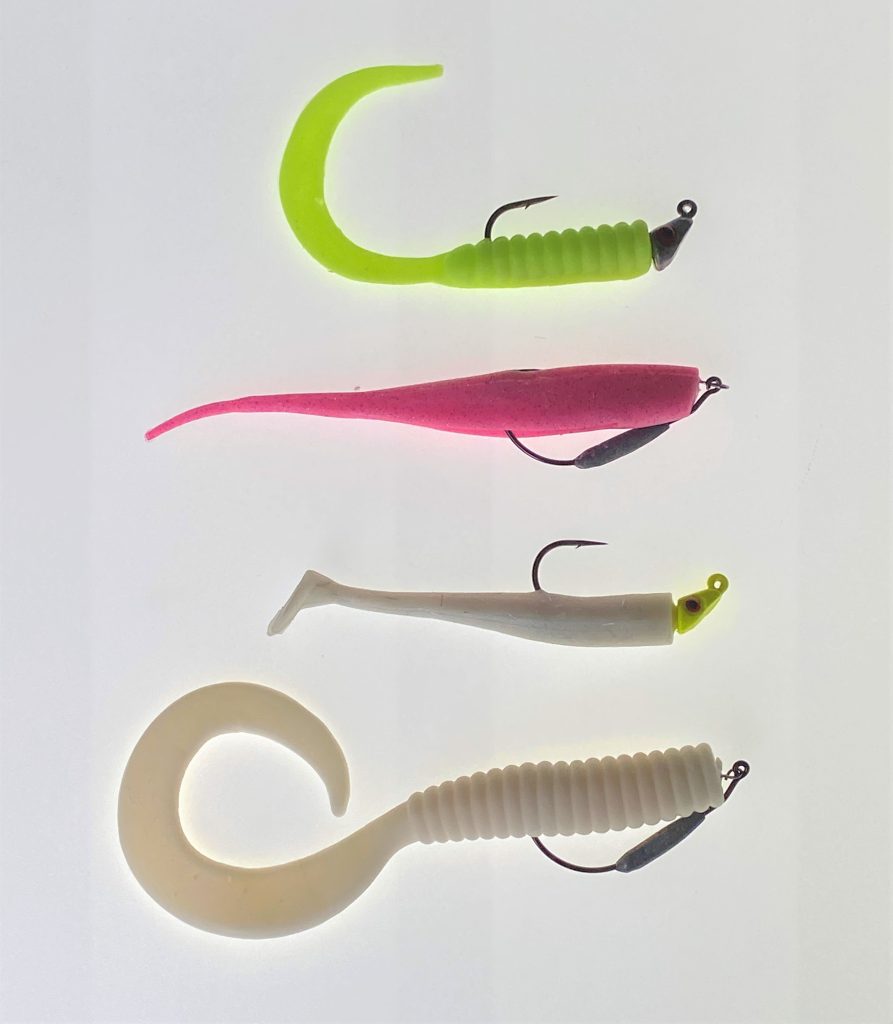 “They like structure so you can start around rocks. They also congregate in tidal rivers and pools, feeder creeks, marsh grass areas and even boat ramps.”

Rutland says he uses a customized Carolina Rig for flounder.

“I use a 10- to 14-inch 20-pound fluorocarbon leader, with a half-ounce or less egg weight.  For smaller mullet that are three to four inches long, we fish on a 1/0 Owner live bait hook and larger baits we use a 2/0 hook.”

He hooks the baitfish at the back of the dorsal fin, just in front of the tail.  That allows the mullet to swim freely. He suggests fishing the bait very slowly.

“Turn the reel handle about once or twice a minute.  Let the flounder take their time to come up on the bait,” Rutland advised..

Rutland says he finds a lot of flounder around steep banks, particularly areas where water is about three feet deep and drops quickly to as much as 20 feet. An artificial flounder rig setup can work well in these locations.

“I fish those areas with a 3/8-ounce Hogie jig head with a soft plastic or scented artificial bait because I feel the bottom well with that weight in most fishing situations, ”Rutland.said. 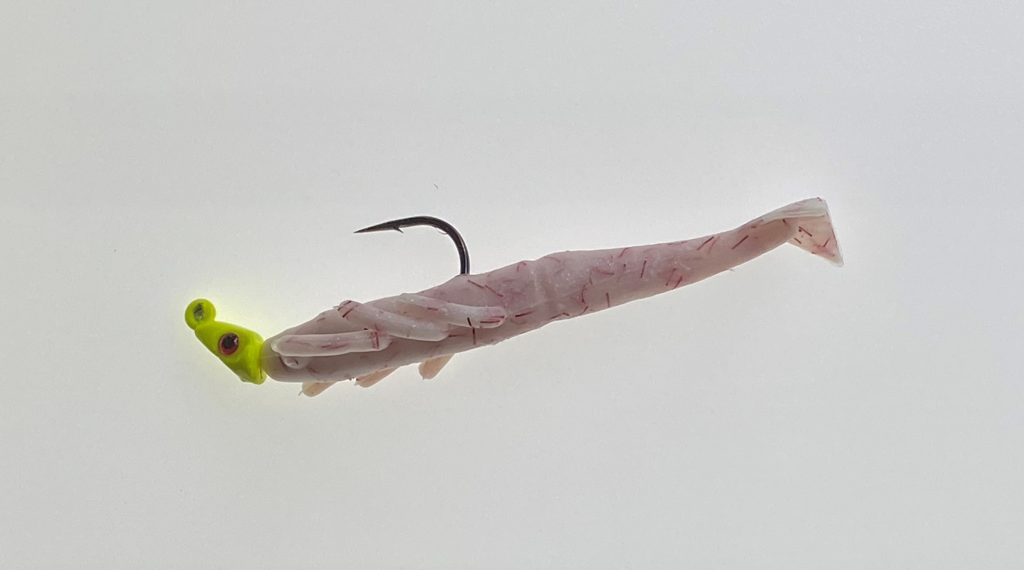 The Fight Club Fight’n Shrimp is a great option for fishing under a popping cork. (Frank Sargeant)

Rutland likes to position the boat on the shallow side and cast out to the deep side.

“Work your bait up that slope. That seems more effective than going from shallow to deep.  I also keep my “hops” very short, probably coming off the bottom only four or five inches,” he noted.

He also said that he just “ticks” bottom with the jig, raising it a foot or so, letting it drop to touch bottom, then raising the rod again and suggests using bright colors, pearl white, chartreuse, pink, electric chicken, and for body shape he prefers grubs with long curly tails.

Rutland likes the scented and flavored lures produced by Fishbites, which is a prepared bait that has become legendary for catching pompano and whiting in the surf.

The company started out making strip baits, but now makes a whole menagerie of swimming minnows with kicker tails, curly tails and pintails, as well as shrimp designs and more.

“I’ve had good luck fishing with Fishbites Fight Club Curly Tails,” Rutland said. Sometimes he adds a second attracter, the Fishbites substitute pork rind with the odd name of “Bob’s Your Uncle” on the same jig.

“While it sounds gaudy, you’ve got these two little curly tails going and it almost looks like a spinnerbait,” Rutland said.

The fact that Fishbites Fight Club lures not only smell like food but also taste like it is an important factor in catching flounder. They tend to grab the front of the lure with their spiky teeth, hold it for a few seconds and then inhale it completely into their mouths. The taste of the Fight Club lures means they’re more likely to hang on, giving the angler a better chance to stick them.

Rutland notes that setting the hook on your flounder rig too soon may mean missed fish.

“When you feel a bump, or the lure just stops, give it a second or two—that’s when the fish is eating it, so don’t set the hook too soon.”

For more information on Captain Richard, visit www.coldbloodedfishing.com or call 251-459-5077.

Fishbites has recently expanded their lineup to include a variety of fully-formed Fight Club lures made of their famed Fishbites composite with scientifically-engineered flavor and scent. The original research for the product was done at the University of Florida by company founder Dr. William Carr. The company is now located in St. Augustine, Florida.

Fishbites Fight Club Lures are made from the company’s patented Hydrogel matrix. These baits are more durable and flexible than other similar scent-based lures currently on the market, according to the company, and each bait is heavily infused with the company’s proven flavor/scent technology.

Fishbites notes that the baits are not immersed in a solution so do not taint hands and boat decks as some scented baits do. The scent is not unpleasant to humans, as some scent baits can be, either.

Kept in the sealed pouch, the lures can be carried in a tacklebox for months and still be ready to use. (The company warns against putting used baits back in with the new ones, however, as this is likely to cause mold.)

Flounder ready for the pan—there are few fish in saltwater that are a match. (Frank Sargeant)

The grubs and jerkbaits all work well on the company’s new line of jig heads, which are equipped with sharp, strong Mustad Ultrapoint hooks. Use the lightest head that will consistently tick bottom where you’re fishing, the company advises.

The shrimp, in particular, is a natural for a popping cork rig, where it can be suspended 24 to 30 inches below the cork on a lightly-weighted hook. Popping the cork creates a fish-attracting disturbance as well as causing the shrimp to dart towards the surface, then flutter back down. It’s a deadly tactic around docks or riprap.

The Fishbites Fight Club lures have a more solid consistency than most soft plastics, so getting some versions on the hook can be a bit of a challenge but once they’re in place, they stay put through multiple fish.

The trick is to keep the lures in the package and keep the package sealed until you’re ready to fish. One tail can last for hours in most duties unless a Spanish mackerel or a bluefish comes along and cuts the bait in half. However, it’s likely the scent loses effectiveness after some time in the water, so a change anytime the bite slows on your flounder rig is a good idea.