Many anglers stay home in front of the television throughout much of January, and they miss some of the best big bass, small water fishing of the entire year.

My big spinnerbait approached the sunken logs at the corner of the small pond. The silver blade just barely ticked over as I slowly retrieved the chartreuse lure toward the danger zone.

When the lure reached the logs, which I could just barely see as they lay on the bottom of the pond, I let the lure pause for just a count, so it could sink just a little, and then started the retrieve again.

But that’s when the retrieve ended. I saw a flash of white on my spinnerbait, and then I felt a heavyweight and a slow, but very strong pull. I managed to work the big fish away from the logs and out into the open water of the pond where I had a better chance of catching her.

After a bit of hand to fin combat and some very impressive leaps from such a big, chunky fish, I had the big ole bass up in the shallow water where I could reach down and firmly grip her by the lower jaw.

No doubt about it, this bass was better- much better- than ten pounds- a prize for any water, anywhere. But especially for such a small pond, this was a fish of a lifetime. But this was not the first time I had met this wonderful old fish.

As I removed the hook of the spinnerbait from the big, dark bass’s jaw, I said, “Good afternoon to you, Huldy. It’s very nice to see you again.”

And then I eased the big bass back into the water and watched her swim back to her logs and her spawning spot.

This was the fourth time I had met up and caught Huldy, this biggest bass of my lifetime, but I certainly hoped it wouldn’t be the last- she’s too much fun to catch to just do it once.

And almost every time I’ve encountered Huldy and her big bass sisters, it came during the month of January, when most anglers are home in comfort. 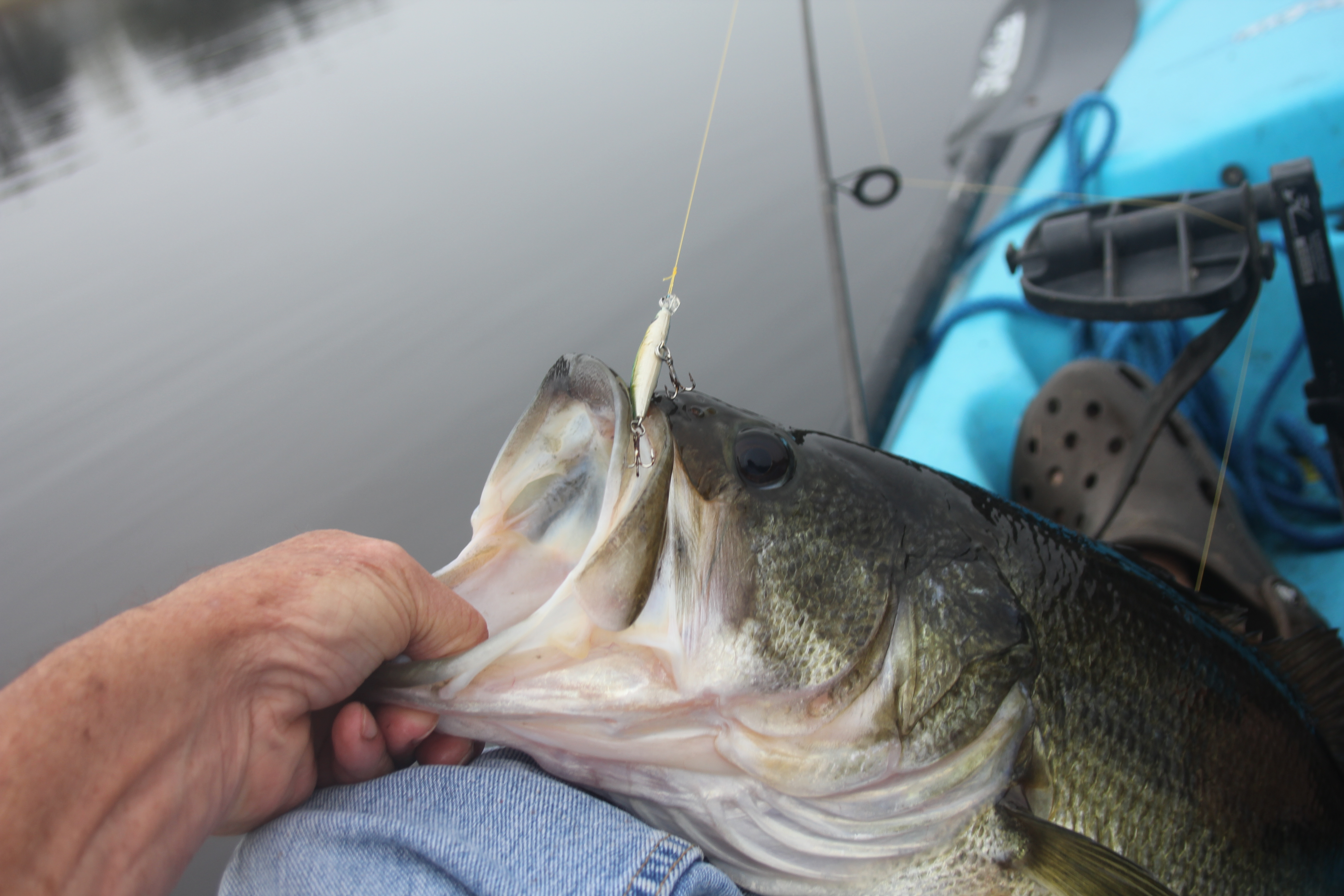 Some of the biggest bass in the world live their entire lives in tiny, often unfished private ponds and lakes. It’s a fact- big bass does not require massive lakes and reservoirs to do quite well and grow very big.

The biggest bass I’ve encountered all came from little waters. Huldy, the featured fish of this article, lives in a small private pond of perhaps five acres size less than a mile from my home in south Alabama. Other small private ponds across the deep South produce many big bass, and anglers can often get access to these small waters when big bass fishing in January.

“If you can find a good pond that’s protected from the direct wind, you can catch bass all year long. There are some really good ponds located on national forest land in addition to ponds on private land.”

Our buddy Tim Perkins, a bass fishing veteran and big bass catcher from Heflin, Alabama, says, “If you can find a good pond that’s protected from the direct wind, you can catch bass all year long. There are some really good ponds located on national forest land in addition to ponds on private land.”

So, why do these small waters produce such big fish in the coldest part of the year? Most of the small ponds and lakes are shallow, and if the water is clear at all, these shallow ponds warm up quicker than large, open water major lakes. The shallow water allows more sunlight to penetrate to the bottom where just a few degrees of warmer water can trigger pre-spawn feeding, especially among the larger bass.

Of course, it never hurts that many of these smaller winter ponds and lakes are pretty much ignored by anglers. Given a couple of months’ quiet and almost no fishing pressure from panfish anglers and less dedicated bass chasers, big bass seems to relax a bit and becomes less wary and easier to approach and sometimes fool into biting.

Also, it’s possible when fishing very small ponds and lakes for an angler to learn the spots where the biggest bass tend to gather and where the very biggest old bass will go to spawn. After some years of fishing the pond where Huldy lives, I know where the logs and the sunken stumps are, and I have a pretty good idea of where Huldy and her sisters will be.

What the Big Bass are Doing

In January, the big bass fishing is totally dependent on the weather. The biggest bass are getting ready for the annual spawn, and this means they are eating everything that they can find. Bluegills, shad, crawfish, small crappie, and even smaller bass are all fair game for big bass putting on weight and storing up protein for the hard work of spawning.

Big female bass will produce thousands of eggs, and it’s not unusual for a big bass like Huldy to produce egg masses weighing a half-pound or more- it takes some serious food intake for a big bass to produce this many eggs. So, the biggest bass in small ponds are eating in January.

But, if a particular January is very cold so the waters of ponds and small lakes don’t warm up toward the magic 60-degree mark, big bass won’t feed as much, and they won’t be as easy to catch. They’ll still feed, but they won’t be as active, and they will usually be in deeper water. 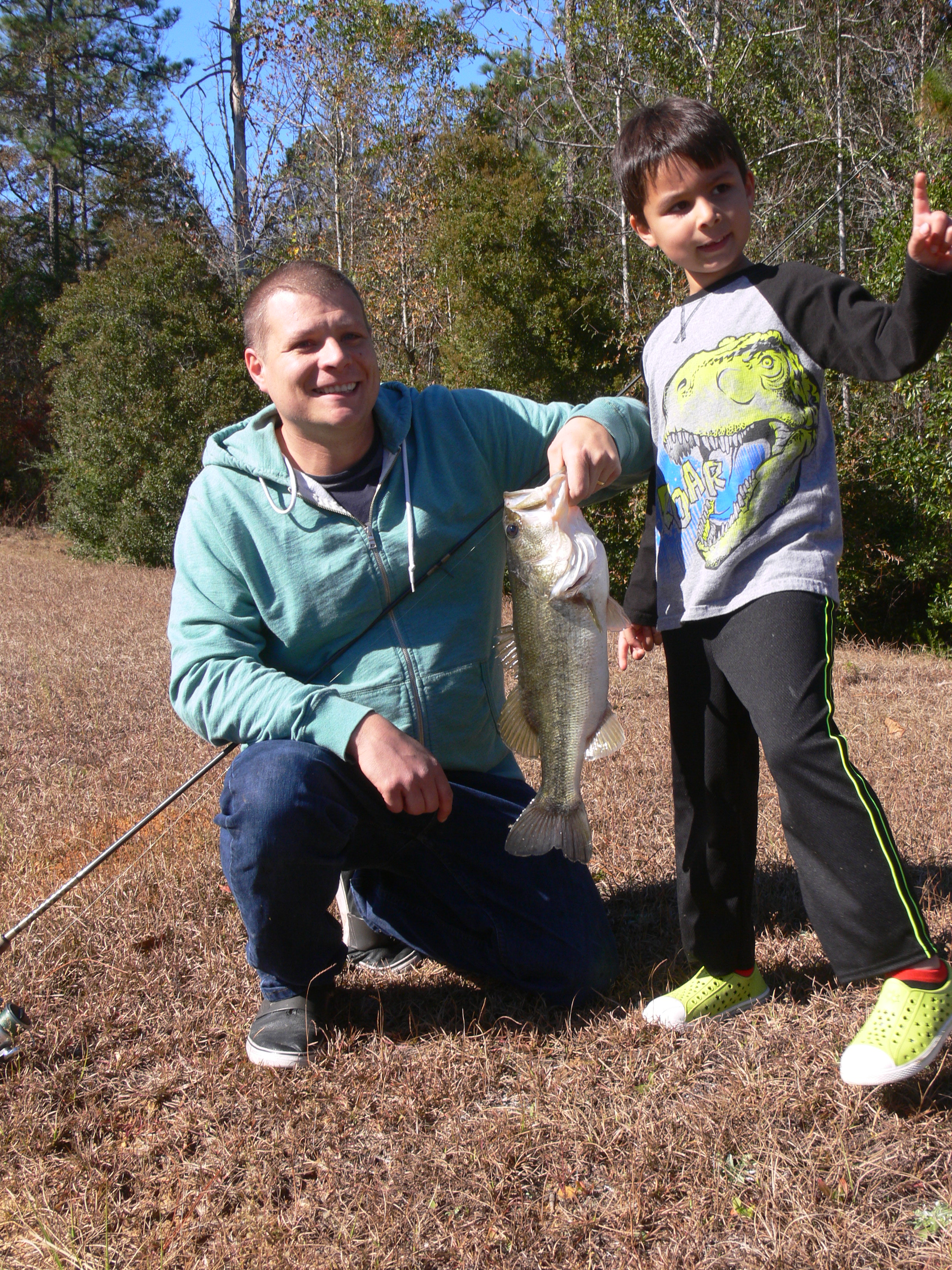 This small pond bass came on a spinnerbait near wood cover. Photo by Ed Mashburn.

What They Will Eat

Tim Perkins has caught a lot of huge bass in January- his fishing journals tell us that for a two-year period, he caught twenty-six bass over 9 lbs. in January, and this includes his personal best, a 12-pound 2 oz. monster.

He says,” Big bass in January are opportunists. If a big meal comes along, they’ll jump it.”

January big bass are looking for lots of nutrition with not much effort, so they’ll gobble down bream, crawfish, and they will especially eat smaller crappie if these fish are present in the small pond where the big bass live.

Anglers need to present the big cool-water bass with an easy meal that looks like it can’t get away and doesn’t require much effort to catch.

Tim Perkins recommends spinner baits in January, and he particularly likes a 3/8 oz. Premier League River Series spinnerbait in chartreuse and pearl. He puts a big trailer- a grub or twin-tailed spinnerbait trailer on the hook.

And he works the spinner slowly. He says,” You want to just have the blade of the spinnerbait go ‘whup-whup-whup’ on the retrieve.”

Although day in and day out more big bass are caught in January on spinners, the big old girls will also take soft plastics and jigs worked slowly around their holding spots.

And the Second Verse

One of the best things about big bass fishing in January in small ponds- the big fish can’t go very far away. When fishing in a lake like Guntersville or Wheeler, a big bass has literally miles of water to get lost in, and the chances of meeting back up with a big bass on one of these monster lakes are very, very slim.

An angler who handles a big bass carefully once it is caught and gets the big old girl back in the water after a quick photo can be assured that the big bass will still be in the same water and close to the same location year after year.

And, it’s a whole lot of fun to remember where the big bass was last year when it was caught, and then to go back and catch her again.

These big small-water bass are much too much pleasure to just enjoy once.