Mega-fish—the biggest catfish in the country—are right here in Alabama.

Most of us enjoy catching a mess of delicious pan-size catfish from time to time.  Catfishing is a fine old Southern tradition. Catching three to five-pound cats is fun, and there’s no better main ingredient for a fish fry than fillets from this size fish.

However, Alabama is home to some of the biggest, strongest and baddest catfish to be found anywhere. Some truly monstrous catfish are living in the rivers and lakes of Alabama; fish in the 100-pound range are caught on rod and reel every year.

A number of guides on the major north Alabama lakes can put anglers on these monster catfish. Like any other trophy trip, the route to trophy catfish takes some planning and arranging for success. 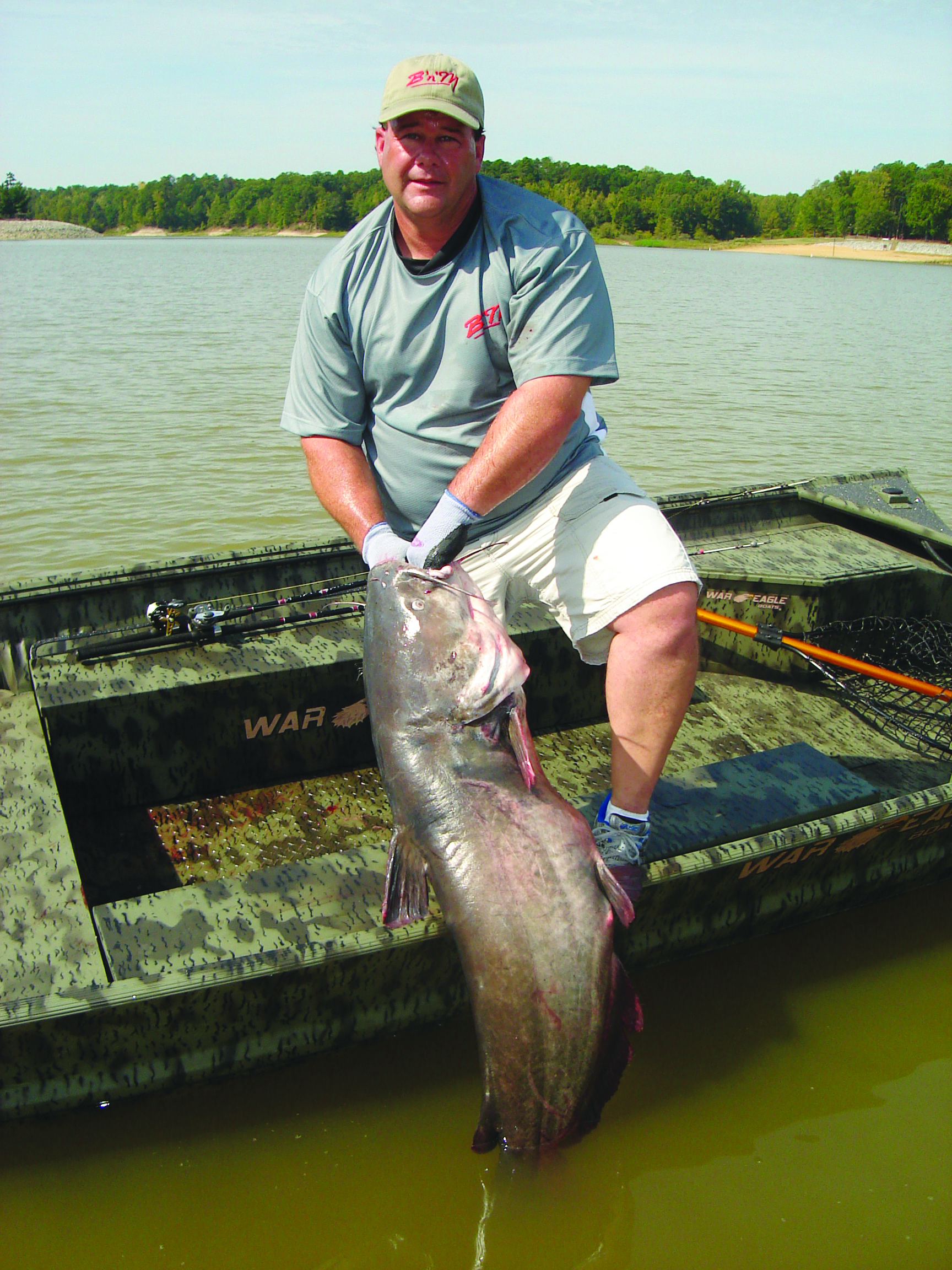 This photo was taken by Ed Mashburn.

Tale of a Big Ol’ Good One

“I had been fishing Wilson Lake for the past couple of weeks in search of a trophy-size fish,” Captain Brian says. “I caught several small fish, but I had no luck on a fish over 30 pounds. Since the bite on Wilson and Pickwick was slow, I contacted Mike Mitchell of Albertville who has a great deal of experience on Wheeler Lake to see if we could locate a trophy fish. When we made our first stop, we landed the huge fish after about an hour.”

“We caught the big fish in 52 feet of water just downstream of Elk River,” he adds. “Mike slowly pulled the rod straight down to about a half-bend. It sat motionlessly. But when I took the rod out of the holder, the fish began to pull really hard. After a short fight, the 75-pound catfish was in the boat.”

Be assured that a 75-pound catfish qualifies as a trophy anywhere. And that fine fish was not an unusual catch. The best thing for us anglers who want to catch a monster like this is to know lots of them are in the big lakes. They are no longer rare.

How to Find the Biggest Alabama Catfish

For us anglers who want to go after the mega-catfish, there are some things we can do to improve our chances.

First, timing is important. Captain Brian says the prime months for catching really big catfish are September through March. October is a good month for the big ones. Hot weather months are typically the poorest times to go after really big catfish.

In cool weather months, it’s not uncommon for anglers to fish for seven or eight hours to get only four or five bites—it’s not usually a fast, hot bite. But the chance of hooking a 40-pound or larger catfish is much better. Those four or five bites in a day are likely to come from very big fish.

Good quality electronics are just as important for finding and catching trophy catfish as they are for bass fishing.

Big catfish show up well on fish finder units, and good electronics can really cut down on the “search time” when we’re looking for big cats.

“We used my Hummingbird 1198 to locate the fish,” Captain Brian says. “We rode over the area several times and located a few fish there. We then plotted a GPS course with the trolling motor and began to fish. Large cats will show as bright yellow or red arches on the unit.”

The best fishing for big cats occurs when the dams are generating maximum current.  High, dingy water always makes for a better catfish bite. Catfish will move into shallow water in the dead of winter if heavy current exists. They’re looking for food.

It’s possible to hook very large catfish on standard-issue fishing gear. However, the possibility of landing one of these monster catfish on typical catfish rigs is minimal. We need to gear up right if we’re going trophy catfish hunting.

“I use an eight-foot medium-action B’n’M Silver Cat Series catfish rod with an Abu 6500C3 reel with a line counter,” he says. “I spool my reels with 80 lb test yellow Vicious braided line. I slide a one to two-ounce egg sinker up on the line, and then I place a bead between the sinker and a barrel swivel. Next, I put an 18 to 24-inch, 50 lb test mono leader with a 7/0 Daiichi bleeding circle hook.”

The next part of the equipment is very important. A quality rod holder allows the fish to eat and take the bait without an over-eager angler trying to set the hook. That’s important.  Captain Brian adds, “I use a Hi-Tek rod holder, and then I wait for the fish to bite. When a big catfish strikes, it’s important not to jerk but simply apply pressure and start reeling.”

So, what’s it like to hook one of these monsters?

Fishing for trophy catfish is a “bait and wait” process. Most trophy cat anglers use either a whole skipjack or a really large chunk of cut shad. Don’t be stingy with the bait. After all, big baits catch big fish.

When asked how the big ones strike, Captain Brian laughs and says, “The really big ones are either going to hit it so hard you’ll think the rod holder will come off the boat, or the line will simply go slack as the fish takes the pressure out of the line and swims upward.”

“The usual mega-catfish battle is very intense but fairly short.”

Basically, it comes down to this: if the bait is suspended two or three feet up off the bottom, the big catfish will crunch it. If the bait is on the bottom, the fish will lift it and relieve the pressure fairly gently. Of course, when the mega-catfish decides that playtime is over, it will apply plenty of pressure to the angler.

“With the big catfish, there’s no ‘peck-peck-peck’ like we get with smaller fish,” Captain Brian says. “They just take the bait and go.”

After the big fish is hooked, it’s largely a matter of holding on when the fish tries to run and then steadily applying pressure and taking in line when it’s possible. Even the very large—75 pounds and over—catfish don’t fight for an extremely long time. Instead, the usual mega-catfish battle is very intense but fairly short.

We might wonder why the mega-catfish population is so large in the big northern lakes, namely Wheeler, Wilson, and Pickwick. First, the lakes are very big and they all have a healthy food base for the big ones. The food supply combines with healthy water conditions for prime catfish living.

Another reason for the massive number of catfish is the crash of the commercial catfish market. In years past, it was common to see 10 to 15 commercial catfishers on the lakes on any given morning. These guys would harvest 300 to 400 pounds of catfish. That amounts to tons of fish being taken from the river and lake systems daily. Today, commercial catfishing is rarely done in the lakes. The commercial pond catfish culture supplies the demand for catfish fillets, so commercial fishing in the lakes is a lost art.  This has led to more and larger fish in the entire Tennessee River system.

Respect the fish—for the fish and yourself

When trophy fishing for any species, we have to be aware that these extra-large fish are powerful animals. They can’t be simply lipped and lifted into the boat. Big catfish can be quite dangerous if not handled properly.

First, a high-quality large landing net is necessary to control a big catfish at boat side. A net that is too small or rotten and not up to the strain of landing a heavy fish is a recipe for disaster. Get a reliable, big landing net.

When a big catfish is brought aboard, anglers need to resist the temptation to immediately lift up the fish and take pictures. A fresh mega-catfish is very strong, and these fish come with very stout and dangerous spines on several of their fins. Captain Brian reminds us that most of these big catfish have spines that are not nearly as sharp as the ones found on five-pound or smaller catfish, but the trophy-sized fish have a lot more weight and muscle to propel their spines. They are worthy of respect.

“I weigh big catfish while they are still in the net, and then I give them time to settle down before we take pictures,” Captain Brian says. “Don’t try to handle a big catfish when it first hits the deck. Let it rest a couple of minutes.”

A good pair of leather gloves is also a good idea when holding up a monster catfish.  Catfish don’t have sharp teeth like pike or mackerel, but they do have rows of very rough and abrasive teeth in their jaws, and when they bite down and twist and turn, these rows of small teeth can remove the skin from a thumb or the back of a hand within seconds.  Gloves are necessary equipment for handling mega-catfish.

Finally, anglers are faced with what to do with a monster catfish. The ultimate respect an angler can show such a magnificent fish is to admire it, photograph it, weigh and measure it, and then release it back into the water safely. The really big catfish are not nearly as good to eat as the smaller ones, and the big ones are the brood fish that continually re-stock the lake with more catfish. So, when a big catfish is caught, it should be released.

As Captain Brian advises, “Any fish over ten pounds needs to be released. Keep the two pounders for a fish fry.”