The Gulf Coast sun is bright. The spring air is getting warm and the tourists on the beach stare at the parade of big boats moving slowly just out past the second bar. What the tourists probably don’t know is that the boat crews are doing some serious watching and waiting of their own.

Of course, it is cobia time along Alabama and northwest Florida beaches. Nothing else matters very much to the anglers and boat crews except spotting some of the big fish that migrate to our emerald waters every April from their winter haunts far down the Florida coast. Let’s look at how anglers can get in on the big cobia craziness in April.

John Brooks works at Top Gun Tackle in Orange Beach, AL. and has fished for cobia along the Alabama beaches for some time. Capt. Chris Garner guides cobia chasers with High Cotton Charters in Orange Beach and provides us with some good advice. These expert anglers were kind enough to share their experience and opinions on spring cobia fishing.

Brooks says, “We usually go out of Perdido Pass and head east toward Pensacola and even Destin. We usually stay about 200 to 250 yards off the beach on the way east. We may drop out farther, a mile or more, on our way back. We may troll some large Rapalas or other billed lures as we slowly motor, but we are primarily sight fishing.”

Capt. Chris Garner adds, “For cobia, we sight fish. For mackerel, we troll spoons and dusters.”

“The more eyes on the boat looking, the more likely it is someone will see a cobia.” – John Brooks

The biggest key to successful cobia fishing in April is simply seeing the fish so anglers can cast to them. This can be a problem for smaller boat anglers, especially those that don’t have towers on the boats.

Brooks says, “Even without a tower, get on the highest point of the boat and watch from there. The more eyes on the boat looking, the more likely it is someone will see a cobia.”

Nine times out of ten, the cobia will be moving slowly on the surface. They will be dark shapes moving from east to the west usually in groups of five or less. Single fish are quite common. The dark fish are much easier to spot against the white sand in the clear water. Most of the time, these migrating fish do not spook if anglers don’t approach too closely and are quite responsive to anglers’ offerings.

Brooks tells us that locating April cobia is pretty much random along the beaches, but a couple specific areas that often hold fish are just out of Pensacola Pass and just off the beach of the largest condo with green glass. For some reason, many cobia have been seen and caught in these areas.

Migrating cobia face a barrage of lures and live bait as they move up the coastal waters. The numbers of cobia anglers see and the size of them seem to be declining. Capt. Chris Garner adds, “Cobia are most definitely on the decline in my opinion. They are a target everywhere they go, from the equator to New York. Let’s face it. They’re pretty dumb about what they put in their mouths.” 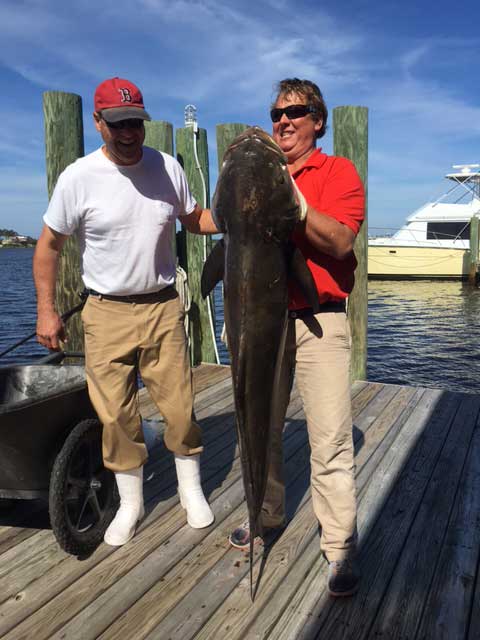 Those brown fish can get pretty big and they are hard fighters. Photo by Ed Mashburn

Bait and Tackle for the Big Ones

Gearing up for a cobia trip shouldn’t set an angler back too much. Probably much of the tackle is already on hand. Brooks recommends anglers use a 7.5-foot rod. Either spinning or bait casting will work. Sometimes, anglers must make long distance casts. A reel that holds at least 200 yards of 20- to 30-pound-test monofilament is good. A 3- to 4-foot leader of 40-pound fluorocarbon is a good idea because cobia can roll up the line when hooked. They can wear through plain monofilament line. Also, anglers are urged to use good, high-end swivels when making leaders. Cobia are very strong fish. If they find a weak point in the gear, they will use it to escape.

Lures for big cobia are simple. Get some big 6- to 8-ounce brightly colored jigs, attach a plastic grub tail and we’re in business. John Brooks recommends a 6-inch Gulp! eel as the trailer. A very good thing about this large jig combination is that small boat anglers can make long casts in front of the swimming cobia when needed.

Live bait is equally simple. Live eels are the first choice of big cobia chasers. The big brown fish usually can’t refuse a live eel. The problem is that live eels can be very hard to find in the Orange Beach area. Some local bait shops try to keep eels, but they sell out very fast during cobia season. Large pinfish and even live hardhead catfish are often good live bait choices for cobia in April.

Of course, anglers who want to catch big cobia need to use very high-quality hooks when using live bait. This is not the time to save a few pennies on cheap hooks. 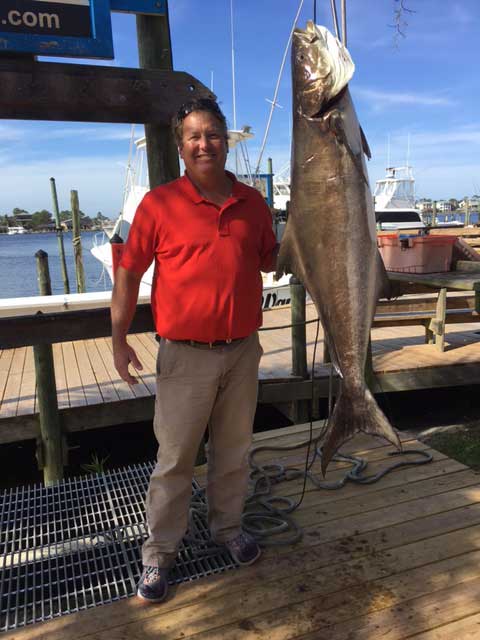 Once a cobia is landed, the rewards don’t end. Cobia are some of the best-eating fish in the Gulf of Mexico. Photo by Ed Mashburn

Now, this is probably the most important element of the April cobia game for anglers. “We can’t catch cobia if we can’t see them” is true the great majority of the time. Anything we can do to improve our “seeing” will likely improve our “catching.”

John Brooks says, “Height makes a huge difference. That’s why we put towers on our boats. Even if our small boats don’t have towers, we can spend our looking time standing at least. In smooth water conditions, standing up on the seat can help. Bright days with minimal cloud covers are best. Chop on the surface makes it harder to see, but when the glare is bad, try to look with the glare and not into it.”

Probably the best thing that anglers can do to improve how they spot cobia is to get a pair of quality polarized sunglasses. These can be pricey, but they are worth the money when it comes to cobia fishing.

“We were able to catch a 78-pound cobia as it was swimming along the top of the water.” – Capt. Chris Garner, fishing guide

Finally, when the big, dark fish are spotted, they will frequently already be in casting range. Anglers should try to put the jig or live bait in front of the moving fish and give the cobia plenty of time to see and take the bait. Anglers who do everything just right and who have a little luck will discover that even though cobia swim slowly when minding their own business, they get very strong and very fast very quickly when hooked.

Captain Chris describes his most memorable big cobia sight-fishing trip. He says, “I was fishing with my young daughter. We were able to catch a 78-pound cobia as it was swimming along the top of the water. It was fantastic. I was in the tower and we got a bait to it on a perfect cast. It was really awesome!”

That’s the kind of report that gets coastal anglers excited about big cobia fishing in April.

Also, anglers without boats are not totally shut out of the April big cobia fishing. The fishing pier at Gulf State Park near Gulf Shores, Ala. provides anglers access to cobia as they migrate through the area. Each spring, many large gamefish are taken by pier anglers who spend the time watching and being ready for that special moment when one of the big, brown cobia swims into casting range.