Catching Blackfin Tuna in The Gulf of Mexico

Catching Blackfin Tuna in The Gulf of Mexico

My medium-weight jigging rod tip is dipping rapidly into the water. My reel is complaining loudly as something strong and fast is pulling line off the reel. My back, arms, and wrists are starting to ache just a little bit, and sweat is trailing down the side of my face. My fingers are smarting from where they were pinched between the rod grip and the rail of the boat as I fight to gain leverage on this strong, powerful fish. After a couple of surging runs deep in the clear Gulf water, my fish starts the circle of death. The fish pulls away, and I hold on and then crank fast when the fish comes closer. I lift hard and then crank, several times, and then there it is, my gorgeous tuna appearing deep down in the glass-clear water and coming closer with every lift. Hard work has never, ever been this much fun. Catching blackfin tuna is great!

Blackfin tuna are not the biggest tuna in the Gulf waters, and they are not held in quite as high esteem as their bigger and more colorful cousins the yellowfin tuna, but these blackfins are easier to find, easier to hook, and they offer anglers some great fishing and a whole lot of it.

How to Find Blackfin Tuna

Anglers who never leave sight of the land will most likely not be catching blackfin tuna anytime soon. These are true blue water, open Gulf fish, and to find the biggest concentrations of blackfins, a boat of considerable size is needed.

Mike and Skipper Thierry have done overnight tuna trips out of Dauphin Island for many years, and they know how to put ambitious anglers on tuna. And these overnight trips are simply a lot of fun as anglers get to see things that most people can only dream about. It’s not uncommon to see large sea turtles, huge sharks, unusual migrating birds, and of course, the massive small-town sized drilling rigs that are the most common targets for tuna trips.

Skipper Thierry tells us that they don’t expect to encounter blackfins until they reach sixty miles or more offshore. This is a lot farther offshore than most small-boat anglers want to run, and that’s why going on the bigger professionally run charter boats is such a good idea.

On these overnight trips, anglers have very comfortable sleeping and resting arrangements, air-conditioning, and equipment for this specialized kind of big game fishing is provided by the boat. Escape is a 65 foot long, dual Volvo diesel powered boat with hot water showers, flat screen television, and a Big Green Egg to cook on. These overnight tuna trips are not rough conditions, except when the big tuna treat the anglers badly.

Anglers can bring their own gear if it’s appropriate for big-game fishing. Also, advice and direction on catching blackfin tuna are provided by the crew. and when it comes time to gaff a fine, fat blackfin after an intense battle, a deckhand will be there.

In general, anglers won’t have any trouble catching blackfin tuna if they head for one of the far offshore drilling rigs. These massive structures provide protection for a wide range of fish and other ocean dwelling creatures, and the smaller critters around the rigs draw the hungry blackfins to feast on the constantly renewing banquet of food. It may take a bit of searching and running to find the rig which has the cleanest, most productive water, but when the tuna are found, the fishing is usually very fast. 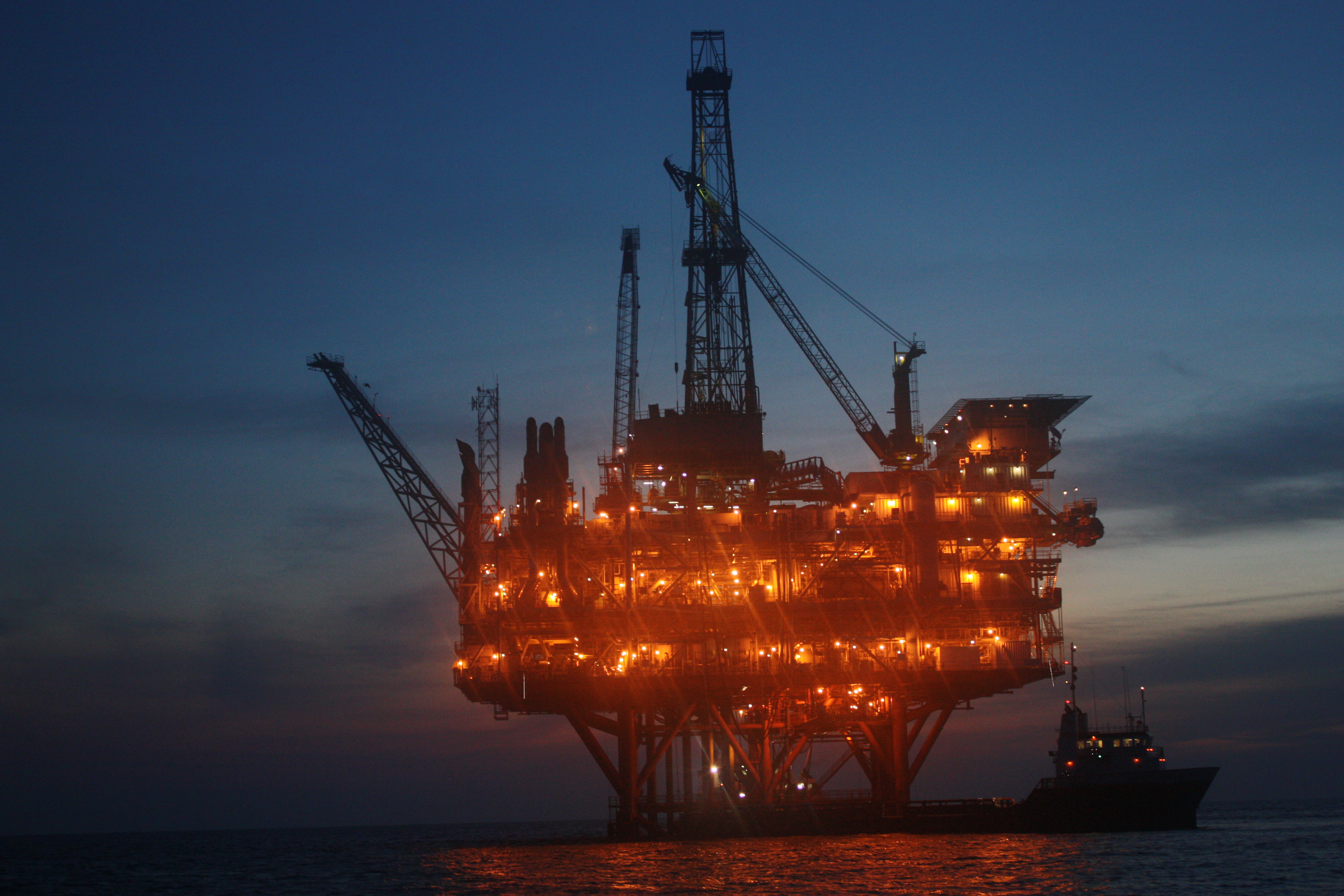 They run in massive schools so catching blackfin tuna can be intense. When they are found, fish after fish will be hooked and since there are no limits on blackfin tuna, anglers can literally load a boat with the hard-pulling tuna. Blackfins are often used as “chunk bait” for their larger cousins the yellowfin tuna. Some of the blackfins that are caught will be converted into two-inch square chunks of bait and then drifted in the current for the yellowfins to find and gobble up. Apparently, people are not the only creatures that find blackfin tuna very good to eat.

Another thing about blackfins that make them very attractive to offshore anglers is that they don’t leave the deep blue water off the Alabama coast on migrations as some pelagic fish do. Skipper Thierry says, “Blackfin tuna are normally plentiful all year round with the most consistent fishing during spring and fall.”

So, if we can get far out into the deep blue Gulf waters, the blackfin tuna will be there waiting for us.

Blackfin tuna are not massive fish; most blackfins in the Gulf will run 25 pounds or less, but they are extremely powerful fish. Skipper Thierry says, “The average blackfin is around six to ten pounds. Some schools are larger, some smaller. We have caught some to 30 pounds on the Escape.” A good thing about their somewhat smaller means catching blackfin tuna can happen fairly quickly, allowing anglers to land them and then get back on another fish instead of having to fight, and perhaps lose, one single giant fish after hours of struggle. 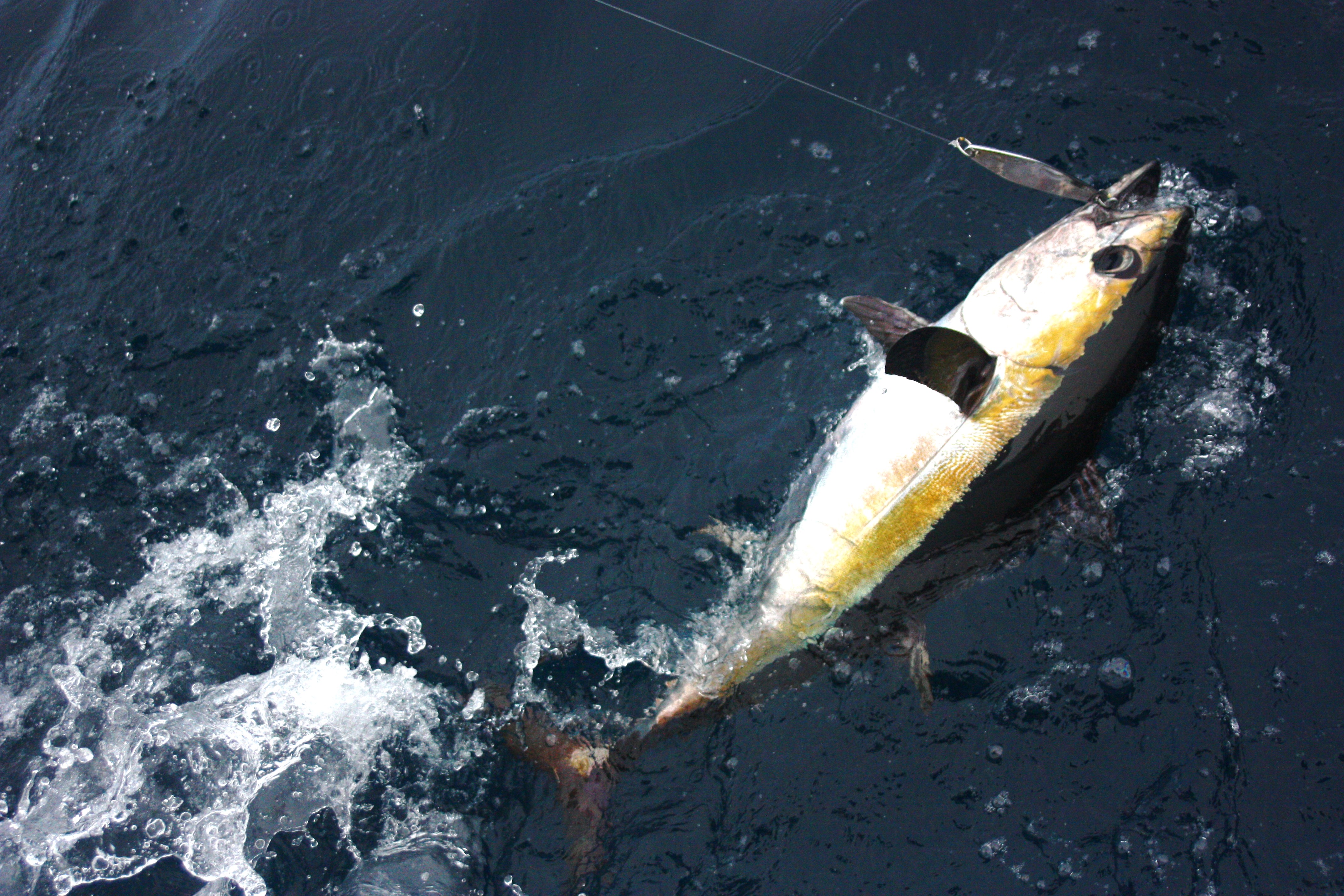 Blackfin will take a wide range of heavy spoon and jigs dropped to them.

Successfully catching blackfin tuna requires equipment and line that is up to the task. Skipper tells us that a TLD 20 wide reel with a 7-foot medium action jigging rod is perfect. A six foot 80 lb. leader is what is used on Escape for blackfin tuna. Although such a heavy leader is not needed for the average fifteen pound blackfin, anglers on the long-run, overnight trips have to always keep in mind that larger fish, sometimes, much larger fish, are not uncommon, and a heavy leader on a relatively light rig gives an angler a chance to catch a 90 pound yellowfin tuna if one shows up and takes a lure intended for a much smaller blackfin.

On overnight trips, anglers will be shown how to use heavy trolling gear including fighting belts as the boat circles the drilling rigs. Blackfins eagerly strike trolled lures and rigged live baits of all kinds, and this is a very productive way to locate the schools of feeding fish. Of course, other big fish such as wahoo, yellowfin tuna, big bull dorado, and even billfish are taken on these trolling trips around the rigs.

Don’t Stop When the Sun Goes Down

A very fun way of catching blackfin tuna happens when the boat shuts down for the night. As darkness falls over the Gulf, the big boat will locate itself somewhat away from the drilling rigs, and then the main engines will be shut off and the boat allowed to drift. Some exhausted anglers head for the bunks and a good night’s rest, but other folks stay on deck and experience some wonderful conditions and some exciting fishing. 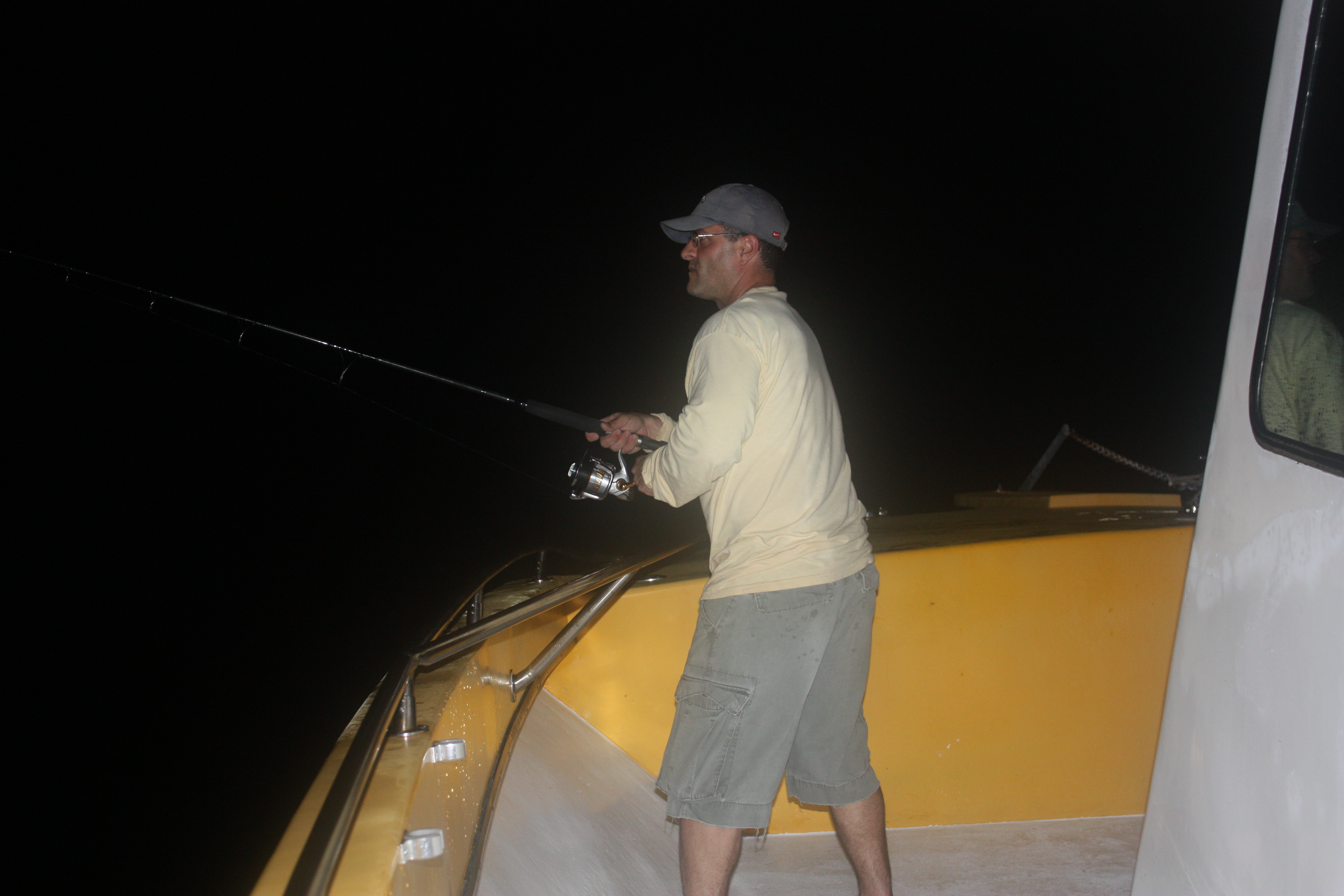 Casting poppers at night is a real blast- literally so when a bit blackfin explodes on the popper.

Most summer nights on the Gulf are calm, quiet and absolutely gorgeous when the air cools off, and life is good. The boat’s lights are left on, and some of the lights are directed down into the clear Gulf waters, and soon clouds of small squid and other bite-size fish appear. And then the blackfin tuna line up for chow time.

A heavy spoon or jig can be dropped into the water beside the boat and allowed to sink on a free line. At some point in the drop, and it usually doesn’t take long, the line will stop going out. The lure is not on the bottom; the bottom is a thousand feet below. A blackfin tuna has located the lure, and if the angler will take up slack and set the hook, something amazing will happen.

It is possible to stand at the rail of the boat and drop lures all night long; catching blackfin tuna after blackfin tuna.

Of course, during the night when some of the anglers have gone to bed and there’s not a crowd on deck, it is possible to throw a big popper plug on a heavy spinning rig to hook and catch lots of blackfins on top-water lures. When blackfins crash a top-water plug, there is absolutely no doubt about it. The top-water strike of a blackfin tuna is more like a detonation than a strike, and then the hard fight begins.

And When the Catching is Done

Catching blackfin tuna is great and so is eating them. Although they are not held in the same high regard as their cousin the yellowfin when it comes to table use, the truth is, blackfin tuna are great tasting fish. The flesh of blackfin is a dark rich red — not the light, pink color of yellowfin. But the taste of blackfin is very nice. Blackfin tuna is not strong or fishy at all, and it is firm enough to hold up to grilling without falling apart. It’s hard to find a way to prepare blackfin tuna fillets that isn’t very good.