Bluegill Fishing Tips For The Spring

Bluegill Fishing Tips For The Spring

May is a magical month in the world of bream fishing. Many anglers will circle the full moon date on their calendars, prepare their rig, and start to ponder how to catch bluegill. They tie on a small hook and attach a float a few feet above.  Old cricket boxes are dusted off and cleaned out. They search out bluegill fishing tips.

Most anglers will opt for live bait when fishing for bluegill and other sunfish and traditionally, crickets and redworms are at the top of the list. Carrying live bait out to the lake or pond requires some extra prep plus there’s always a chance the live bait can be depleted quickly when the bite is on.

However, some anglers will choose a different type of bait or lure and see plenty of action catching hubcap-sized bluegills.  Artificial flies and bugs come in a plethora of styles, shapes and sizes. And when the gills are hot, more time can be spent catching fish than baiting hooks.

Flies and bugs for bluegills are generally delivered to the fish via a fly rod. There are many different types and weights of fly rods on the market and each is designed for a specific purpose.  Since most bluegills weigh in under the one pound , a light weight or action rod is all that is needed. 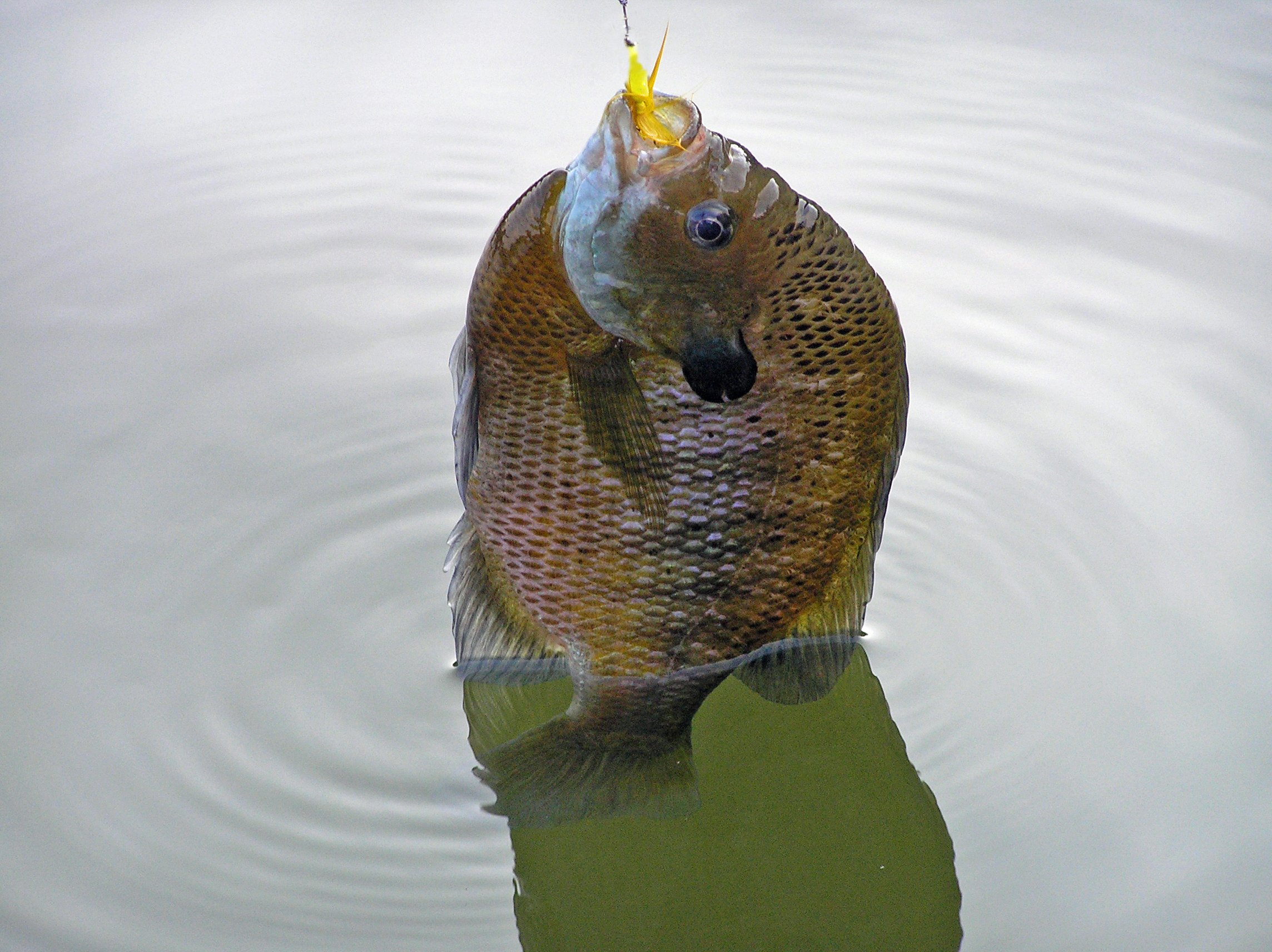 Yellow is a top color for popping bugs to catch spawning bluegills.

“A #3 or #4 weight rod will work fine for bluegills,” mentioned the late Bill Weaver of Eastaboga, Ala. “These type rods are easy to handle and cast any size fly with little effort.”

Weaver loved fishing for any type of freshwater fish, but I think bluegill and bream where his favorite. In his later years a bad shoulder forced him fish with ultra-light spinning tackle.  But, once-in-awhile on a good day he would break out his fly rod and his bluegill rig.

Tackle stores may offer fly rods with reels already spooled with the correct line. These combos can be had for under $100 dollars. Usually, the rod will be two-piece and around 8 to 9 feet in length which is perfect for delivering a small fly or bug to a hungry bluegill.

While trout anglers try to match-the-hatch for the perfect nymph or fly, bluegill anglers don’t have to be picky. Small stones flies, popping bugs and wet flies all will catch their share of bluegills on any pond or lake. In most cases it will be a personal favorite of the angler. 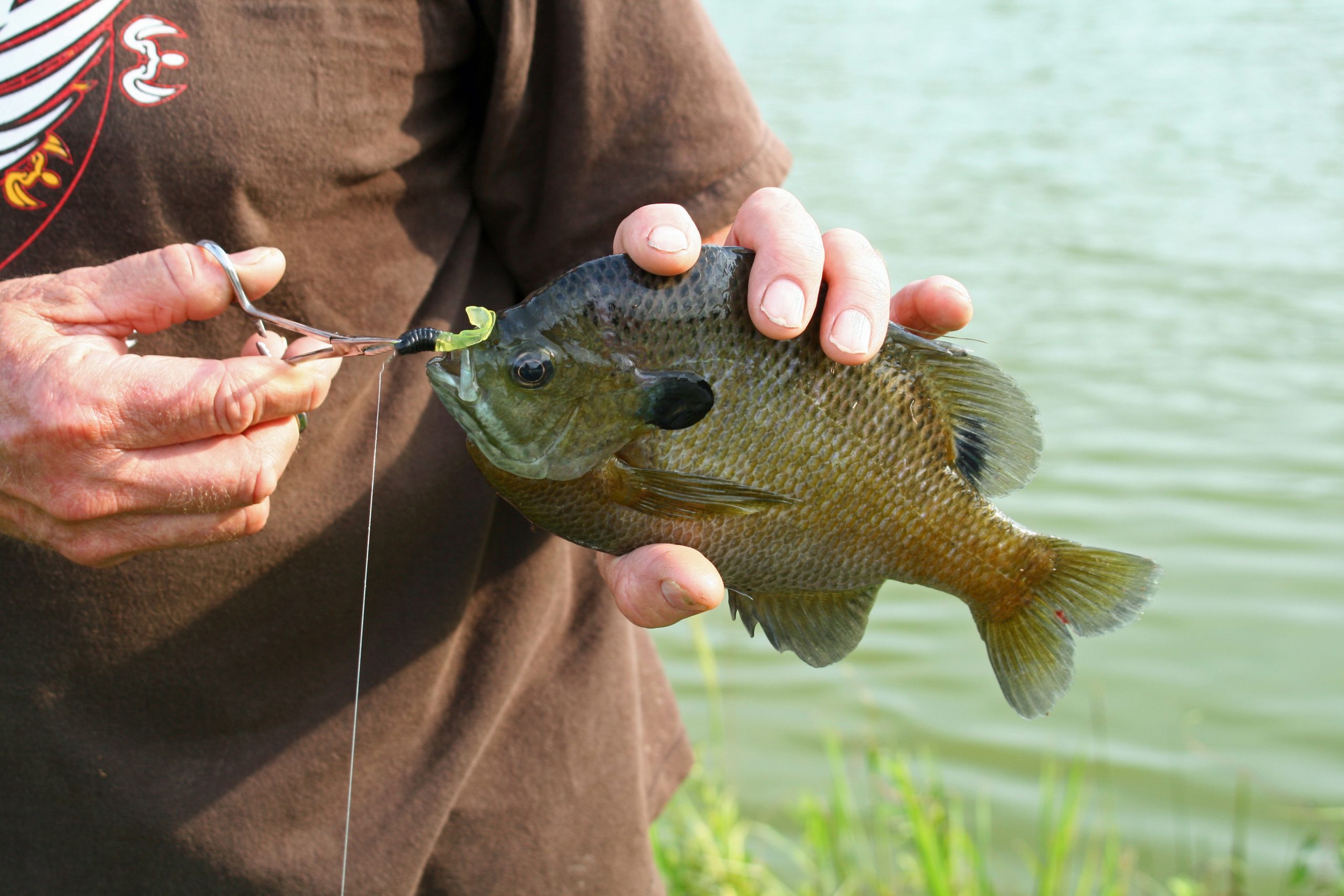 Tiny soft-plastic grubs can be threaded on a #6 hook and easily cast on a fly rod.

“I like to start off with a popping bug,” Weaver commented. “A yellow or white bug with a short hackle works great when they’re bedding,”

Weaver wasn’t really particular about his leader. He preferred his leader to be about half the length of his rod which was around 4 to 5 feet. The leader was monofilament in either 6 or 8 pound test. Weaver said the lighter weight line on leader would give more action to the fly.

Sometimes the paint would wear off the popping bug Weaver was using but  if the fish were still taking the bug he would keep fishing it. After many hits and catches from big bluegills, the popping bug would come apart and he would tie on a new one.

In most lakes and ponds, bluegills along with other species of sunfish, are usually the most common fish. The fish will usually spawn along or near the shoreline. Grass or weed patches at the shoreline are other places to search for bluegills. Low, overhanging limbs will have bluegills hanging out waiting for insects to hit the water’s surface. 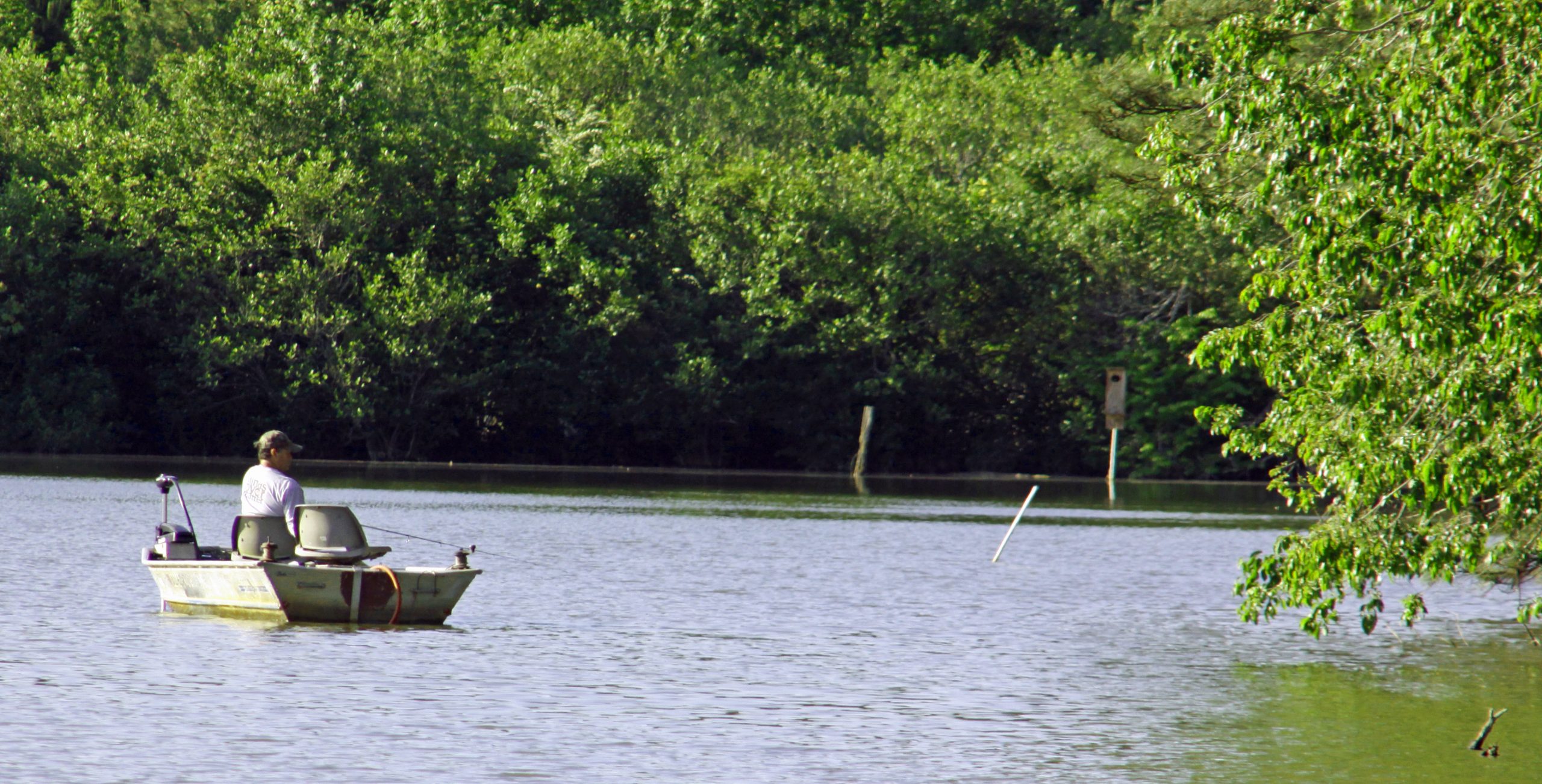 Anglers should place their bluegill bugs under and close to overhanging branches.

When it comes to spawning, bluegills will clean out a roundish spot on the lake bottom to lay their eggs. There are usually several beds together in one location. Individual bed will be about the size of a small dinner plate or saucer.

“Bluegills will bed in the same spot each time they spawn,” Weaver said. When you find them the first time, they will be back again to bed there the next month.”

Weaver has caught bluegills spawning in the same spot throughout the summer months. Of course, there are many different bedding locations around the lake. Bluegills like to spawn in about 2 to 3 feet of water depending on the lake location, weather and water conditions.

Sandy to semi-hard bottoms are the preferred areas for bluegills to fan out their beds and  pea size gravel bottoms are also another good spot to search for bluegills. A quality pair of polarized sunglasses will help anglers see the bottom and locate the beds. 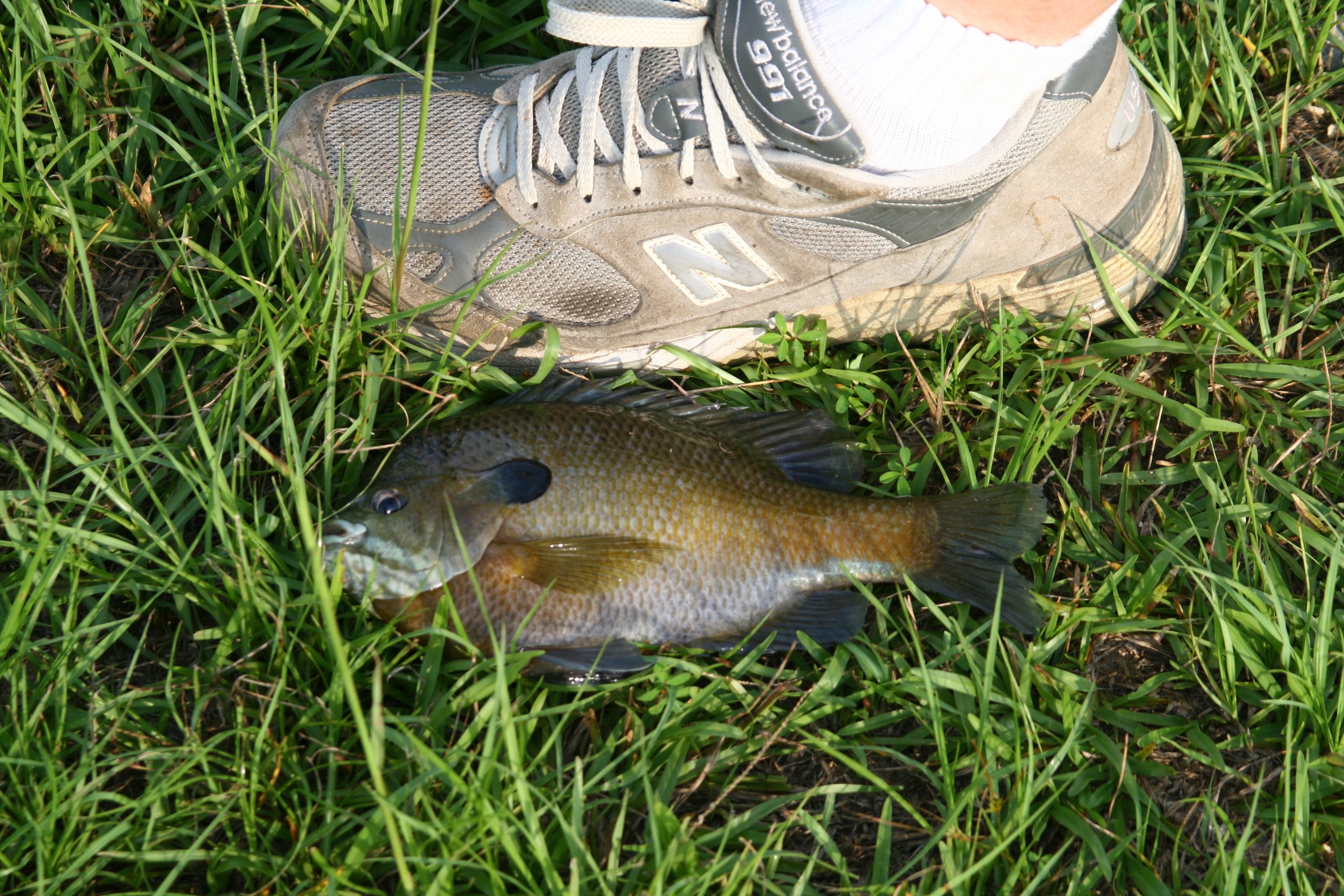 Small flies and popping bugs can catch large bluegills throughout the summer months.

Anglers shouldn’t limit themselves solely to shoreline areas in search of bluegills. Offshore spots like bars, points or humps can also have bluegills setting up spawning areas.

Always approach the bluegill bedding area quietly. And do not move in directly over the spawning beds. Bluegill, like all fish are a little spooky, especially in clear water. A good rule of thumb it not to get any closer than needed to make a cast of your bluegill rig.

Every fly angler has a certain technique they use when fishing their bluegill rig. Bluegills aren’t super picky and will generally take almost any type of bug or fly on the surface. But there are times when a little finesse with the rod tip can move a bug in the right position.

“Let the bug sit for a few seconds before moving it, Weaver mentioned. “Sometimes the fish will come up right under the bug before sucking it in.” 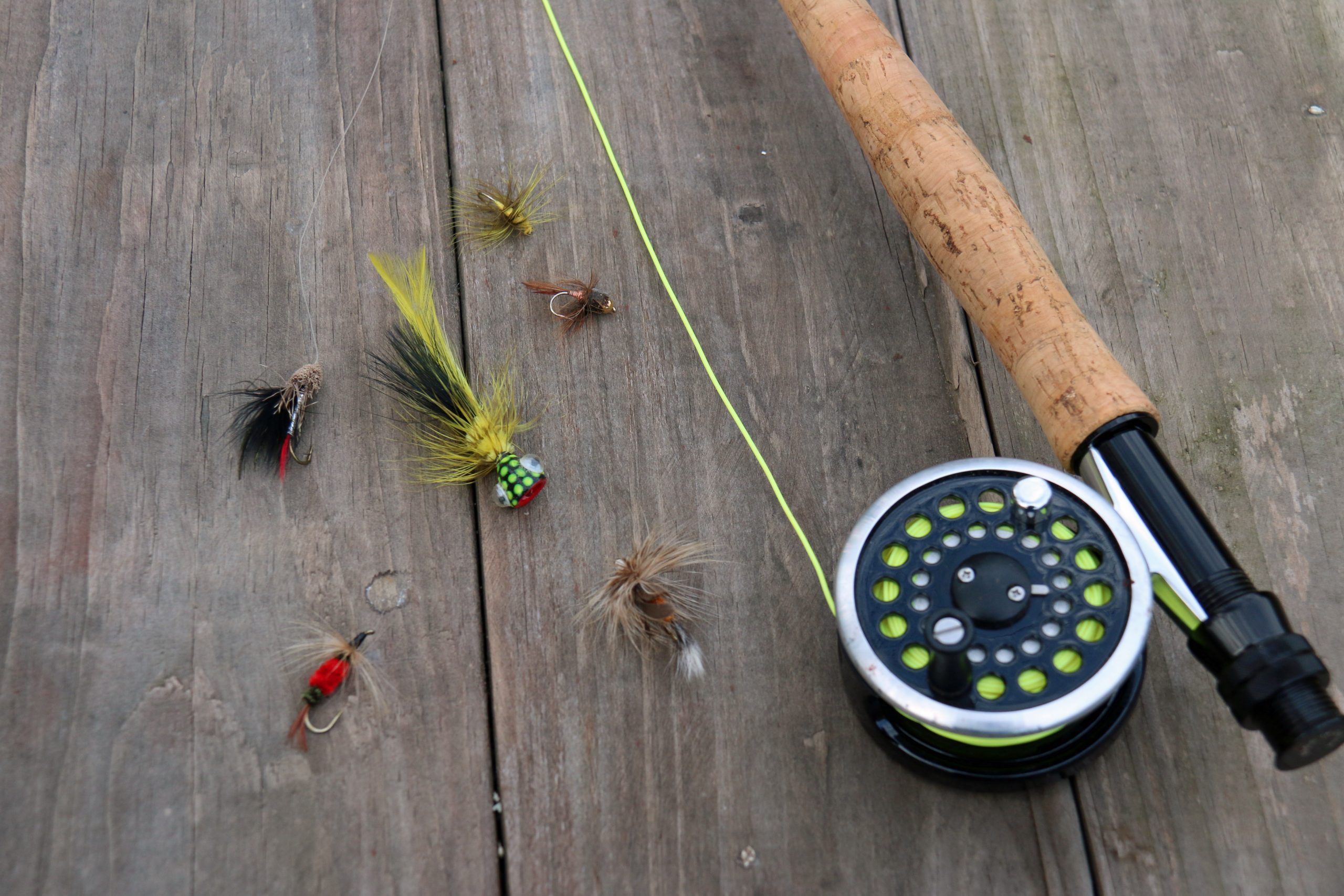 Bluegill anglers will want to switch to nymphs or wet flies if the bite on top slows down.

Weaver would pop the bug with a few short twitches of the rod tip and then let the bug lie still for a few seconds before popping again. The key is keeping the bug over the bluegill’s beds. Once outside the area he would make another cast.

Anglers should try to place the bug directly over the bed if possible. A little trick Weaver would use is to fish the outer edges of the spawning area and gradually cast to the center. This helped from spooking all of fish when one was hooked.

If the action slows on top and bluegills are still around the beds, a wet fly may be in order. Small nymphs will sink down slowly toward the bed. The different looking bug doesn’t matter to the bluegills and they will suck it in.

Sometimes the strike on a wet fly can be very light, especially if the fish are a little edgy from others being caught. Anglers will want to watch for very slight twitch in the leader line to detect the strike. 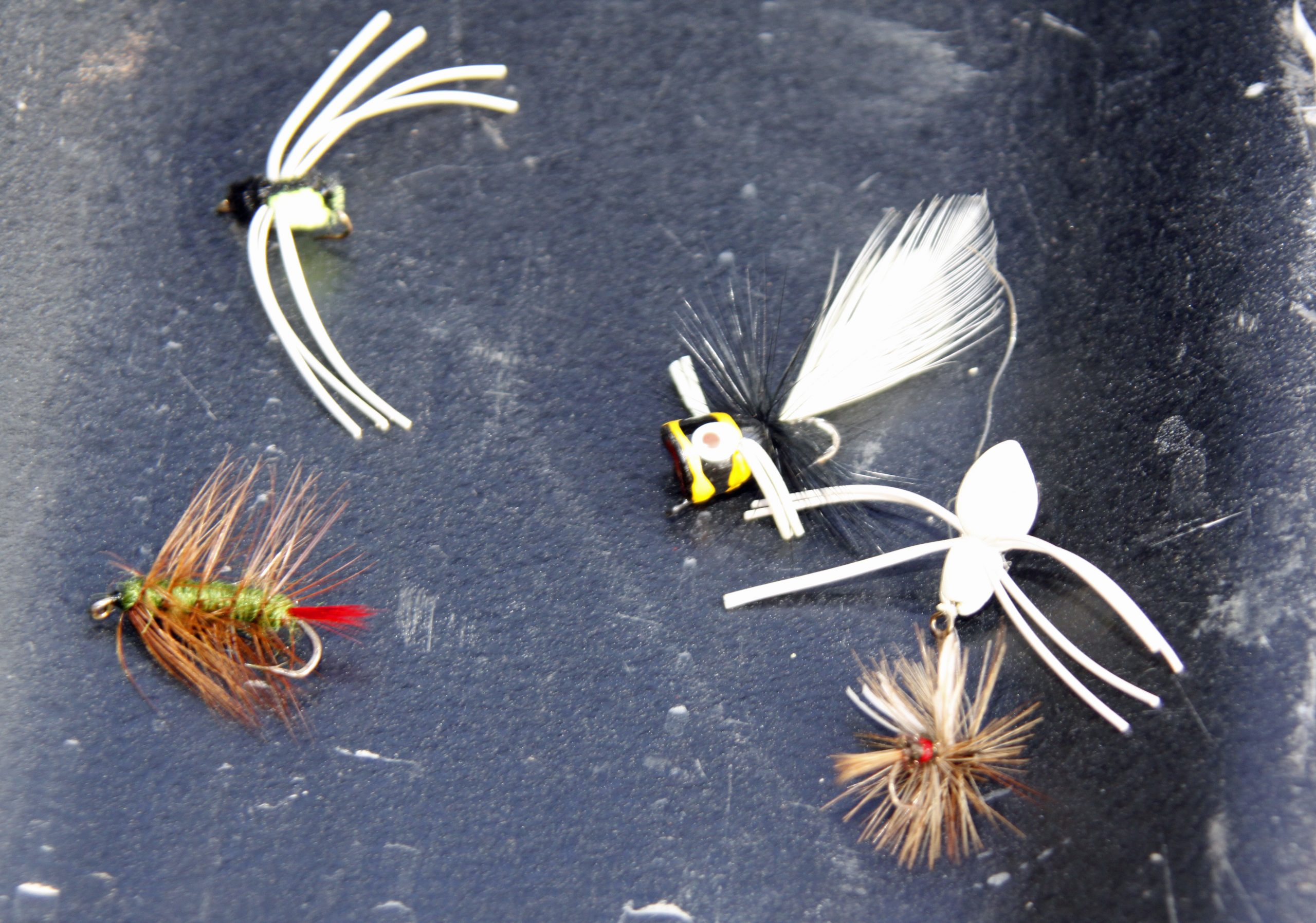 Bugs for bluegills are available in different styles and colors.

The hook-set with bug or fly doesn’t have to be hard and heavy. A quick, soft snap of the rod tip is all that is needed to stick a big bluegill.

Another trick Weaver used when the mayflies were hatching, was to use a bug or fly totally different on his bluegill rig.  His thought was the odd bug stood out more among the hundreds of the live mayflies and the bluegill would focus on that one oddball.

One last bluegill fishing tip, if the action slowed since the fish had gorged themselves on the abundant mayfly hatch, Weaver would keep a plastic worm rigged on a casting rod and cast it into the overhanging bush. A couple of shakes and more mayflies would hit the water triggering another feeding frenzy by the bluegills. 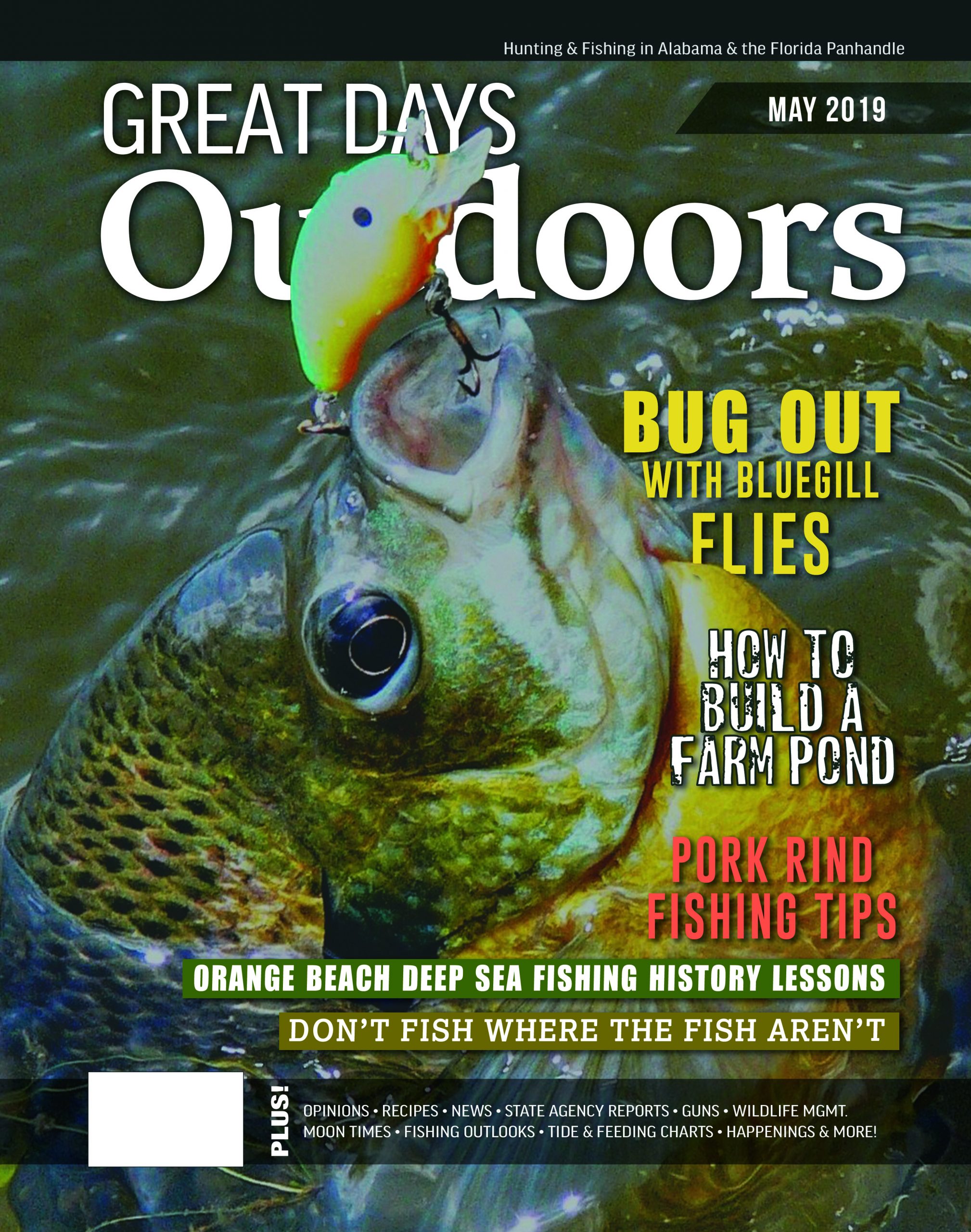 This article first appeared in the May 2019 print issue of Great Days Outdoors Magazine. For more great hunting and fishing content for the deep South, subscribe to Great Days Outdoors print and digital editions or click the image to download this issue.