This thing I have hooked is just about to pull the rod from my hands.  When I had cast out into the clear waters, I was not prepared for this brutal strike and powerful fight. I was not ready for the sudden pull and run. I assumed that some big bull reds were around- it is fall redfish season on the Gulf Coast, after all, and I’m drifting just outside of Pensacola Pass but I was not quite ready for the strength, power, and aggressive strike of this bull redfish. 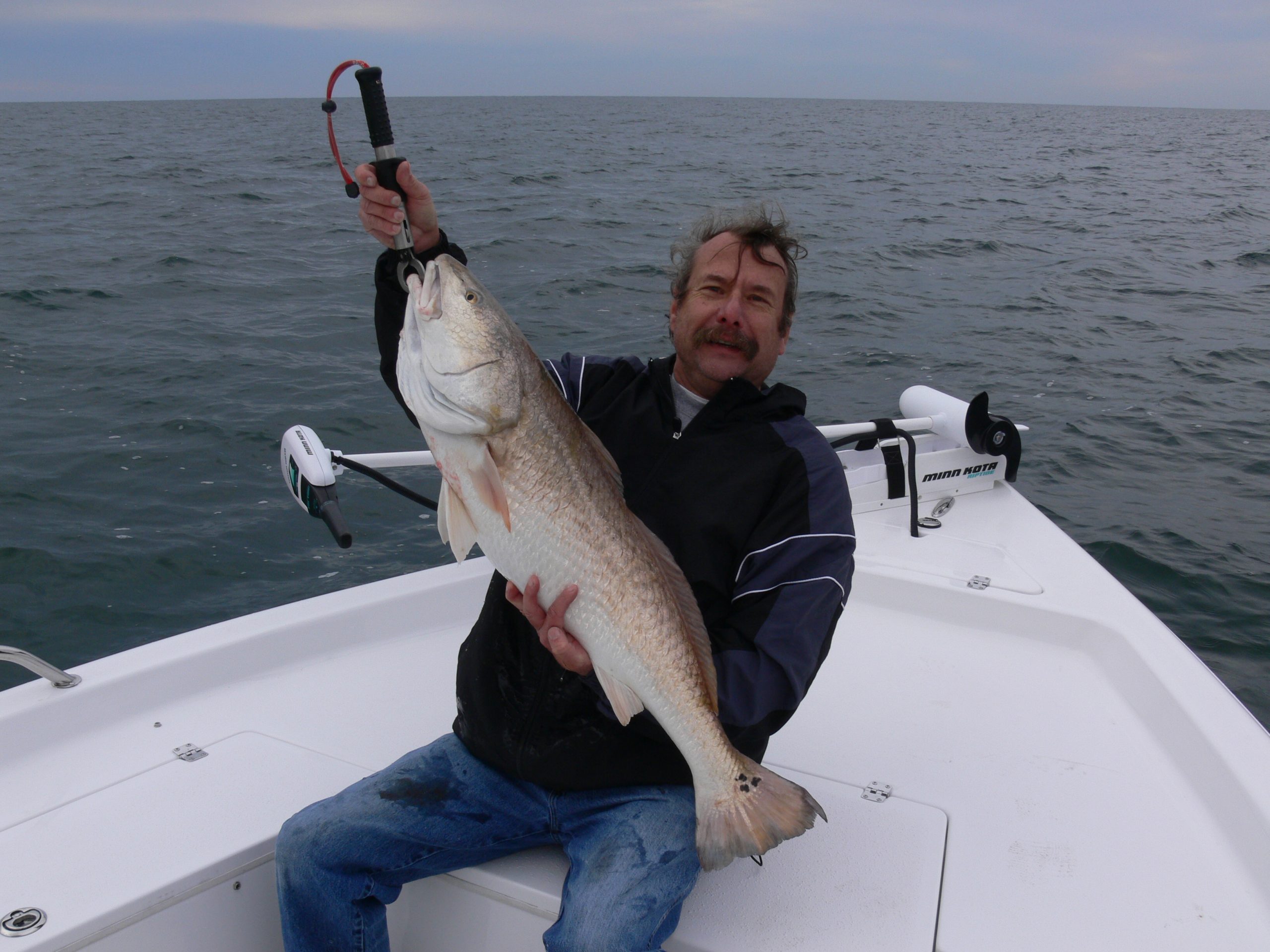 Big bull reds will make anyone smile- and they run in massive schools in fall.

As I slowly worked my hooked 25 lb. redfish to the boat, a cloud of other equally large and aggressive reds followed the hooked fish, and their flashing golden-red sides changed the color of the clear water.  The emerald green outgoing tide water became a red- almost crimson- color.

This kind of fishing makes almost anyone want to holler, “Roll Tide!”

Even if you cheer for Auburn or Georgia, the Rebels or the Bulldogs, the Gators or the Seminoles, and don’t love the team from Tuscaloosa, this redfish-caused “crimson tide” is something everyone who chases big strong fish on the Gulf Coast cheers for each fall redfish season.

All along the Gulf Coast from the barrier islands of Mississippi and Louisiana to the Panhandle of Florida, in the fall of every year, huge schools of big redfish flood the passes and beaches and give anglers the chance to hook and fight world-class redfish.

How to find the Bulls during Redfish Season

Before we can catch the big bull reds of fall, we have to find them. Let’s be honest here- the Gulf and the coastal waters comprise lots of territory for the massive schools of big reds to move around.

Even though the schools of reds turn the clear Gulf water red when they gather to massacre baitfish as the bait schools move from the bays into the Gulf for winter, it can be very hard to locate these aggressive bull reds.

There are some things we can do to help find the bull reds.

Birds- They are Diving for a Reason

The very best fish-finders in the world are not the remarkable new electronic sonar units that we can install on our boats.

Sea birds are the best and most reliable fish finders in the world.  Gulls, terns, pelicans, and other fish-eating birds must find the baitfish for them to eat and live. 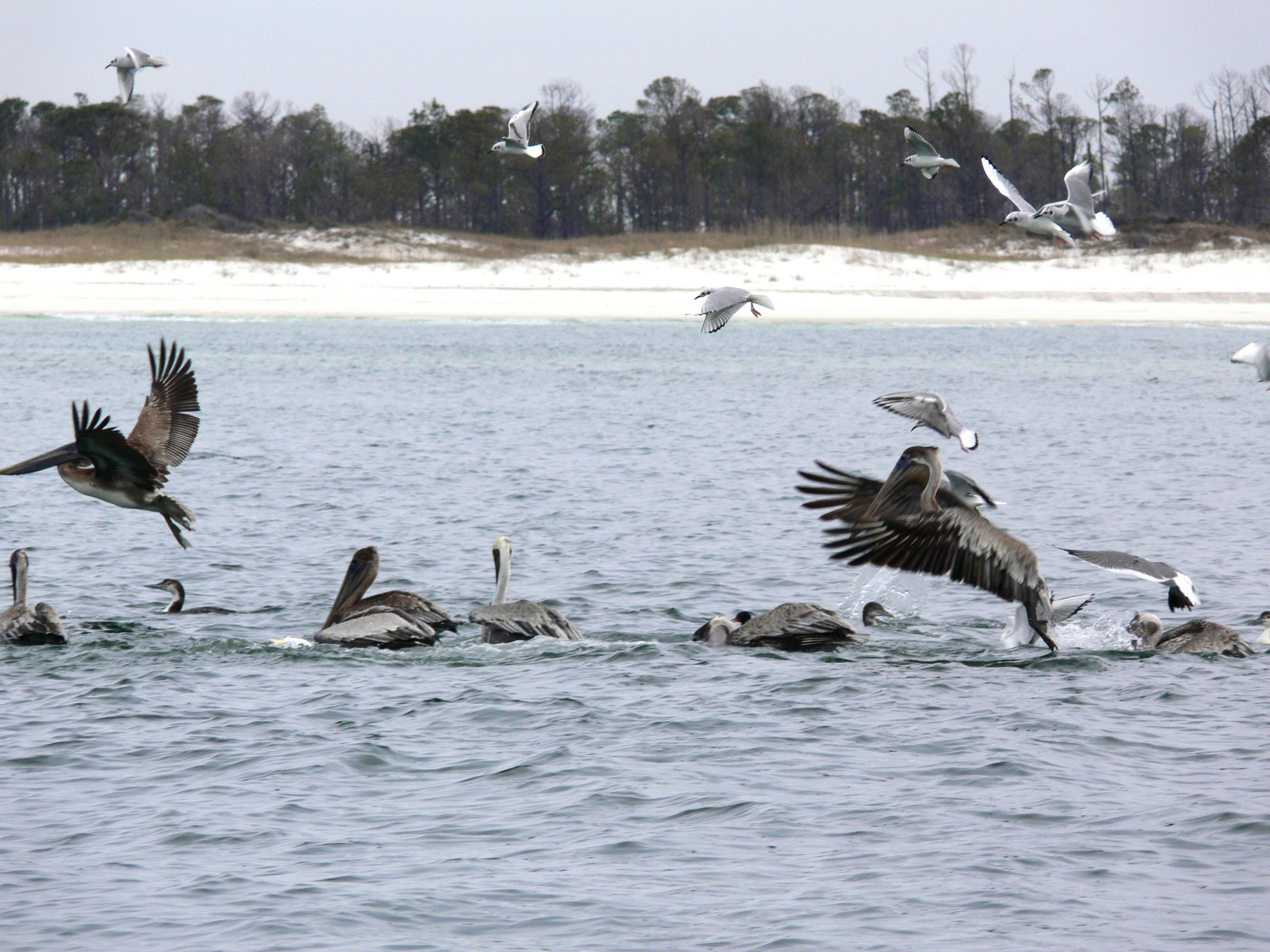 When the birds start working bait like this, the big reds will be under them.

When the birds find the baitfish, they dive, scream, circle and create a scene that must be seen to be understood.  The baitfish that these birds seek for their own use are the same baitfish that the big bull reds are looking for. Most of the time, if the bait is up on the surface where the birds can find them, there are big reds below the bait eating them up down there.

A very important point for folks just getting into the fall bull red fishing game- don’t approach the feeding school too closely.  Even though the big reds may be smashing through the surface and creating a mass of white-water mayhem, they are very sensitive to disruptions from above, and a boat that comes too close will spook the birds, the bait, and then the big reds. Try to get in casting range, and then work the outside edges of the feeding school. 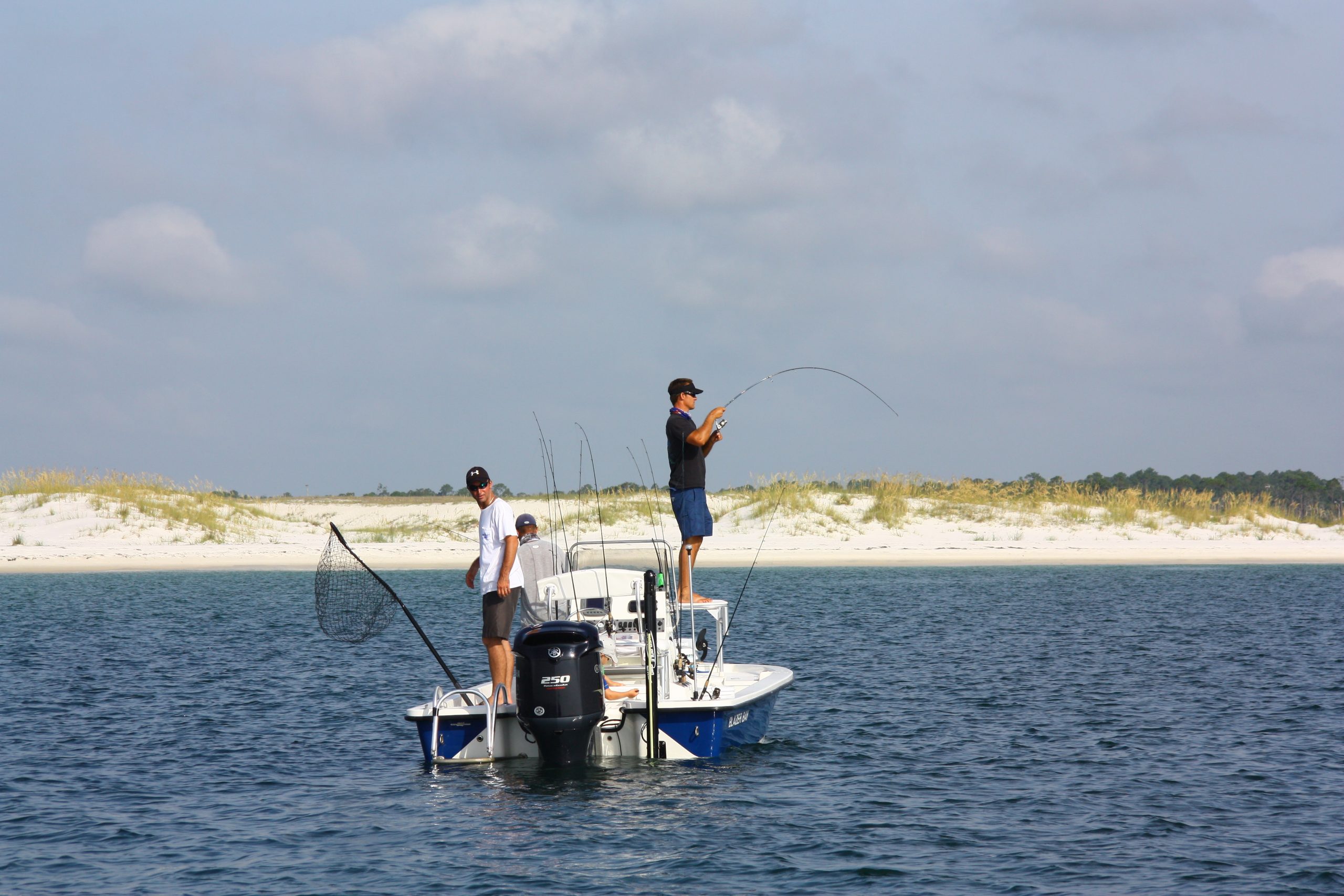 The big bulls will be close to the beaches in fall, and they are easy to find- not to catch.

When casting to busting bull reds, there’s no lure better for the job than a simple ½ oz. white or silver jig.  A light colored soft plastic grub body pinned to the jighead makes a long-distance lure that the big reds can’t resist.  Cast a jig to the feeding area, let the jig sink a couple of feet and then start a quick retrieve. You will want to have a good grip on your rod when you do this- big reds will try and take the rod out of an angler’s hand.

For another kind of super-exciting bull redfish fun, anglers can try fishing on top. It can be a whole lot of fun to cast a big top water plug to a feeding boil of big reds and watch the mega-reds blow up on the lure.  Reds have a hard time getting a top water plug in their undershot mouths, but that doesn’t keep them from trying- time after time.

An important point for anglers using top waters is to think about switching out the treble hooks that come standard on most top water plugs and replacing them with strong single hooks.  Treble hooks can do a lot of damage to big reds when they get hooked, and they can be very difficult to remove from a deep-hooked red. A couple of single hooks are much easier to remove and they don’t do nearly as much damage to the fish as trebles.

Sometimes the big bull reds aren’t busting on bait, but that doesn’t mean they have left the area.  Big reds will move deeper in the water on very bright days during redfish season, but they still feed heavily on the bait that is present. 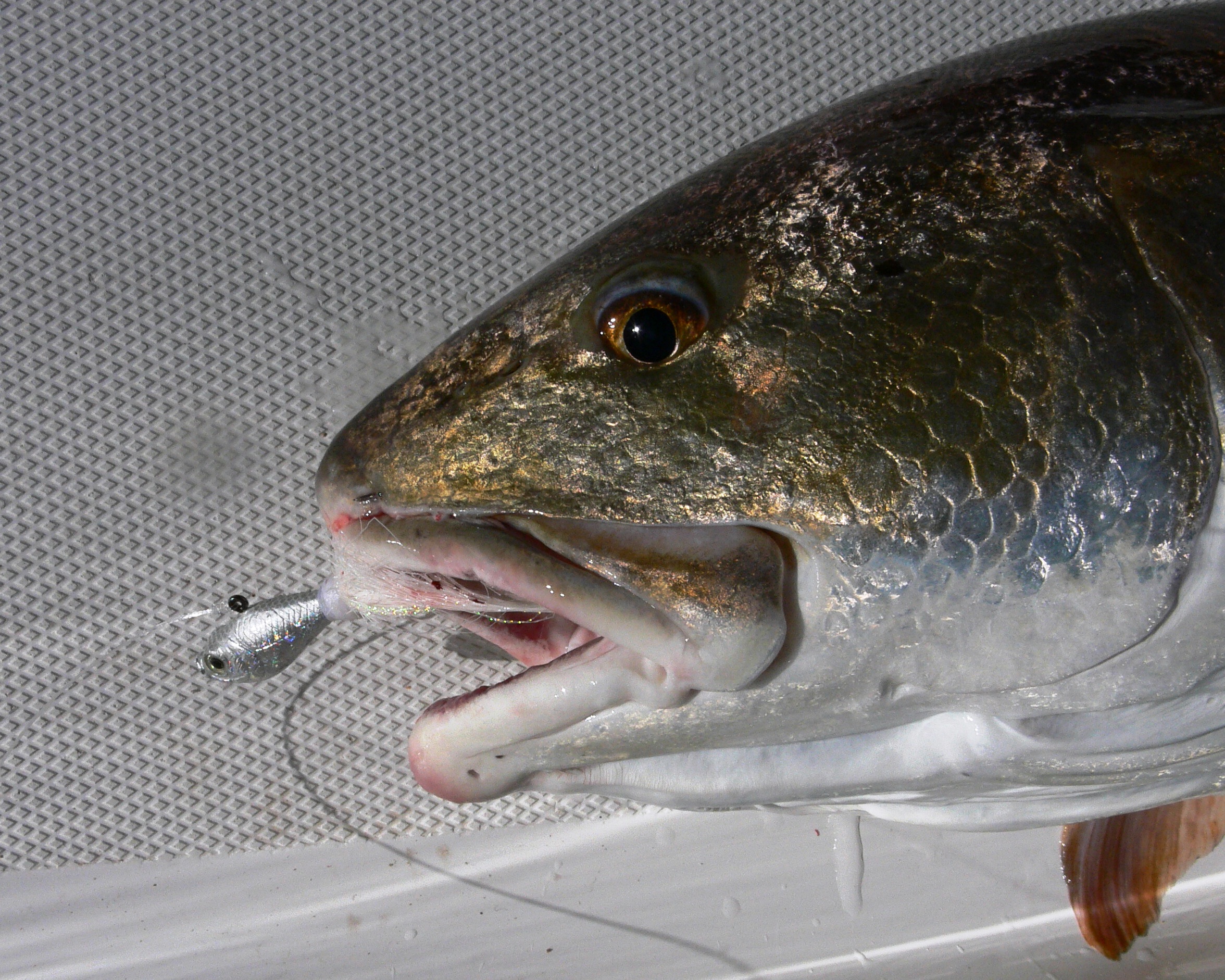 Heavy jigs that can be cast a long way are very effective on bull reds.

A traditionally effective trolling plug for big reds is the old Mann’s Deep 25 crankbait.  I have had great results with the bright pink solid color. Troll this big old crank bait just fast enough that the rod tip bounces as the plug wiggles through the water.

When trolling for big bull reds, have the drag set just tight enough to keep the line from being pulled off the reel by the plug. When a big red hits a trolled crank bait, the line or the rod can be broken if the reel’s drag is too tight.

As with the top water plugs, it’s a good idea to replace the big treble hooks with strong single hooks which shouldn’t affect the action or running of the plug as it is trolled along the second sandbar along the beach or across the passes where the bay waters meet the Gulf.

Drift Bait Across the Bar

A very reliable method to find and catch bull reds is to drift a live or frozen pogie or mullet across Dixey Bar at the mouth of Mobile Bay. Bull reds sometimes gather in massive schools over the solid, flat bottom of the bar.

Find the way the tide is running, move the boat up current and then let the current sweep the bait and boat across the bar. 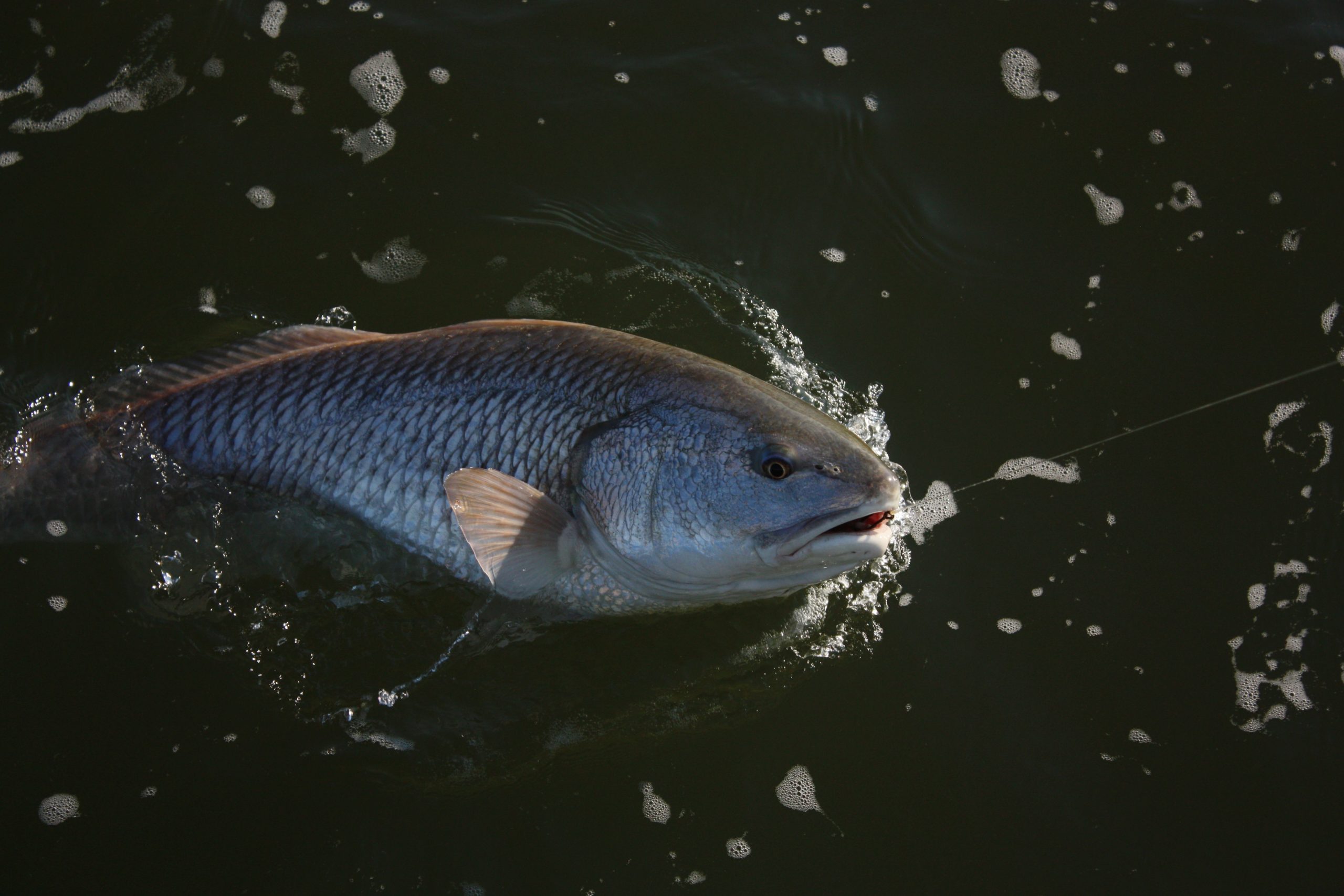 When big reds take a lure or bait, they will stress any angler.

When reds are found, there will be no doubt about it at all.

Drifting live bait just out of Pensacola Bay toward the Massachusetts Wreck and from the bridge over Destin Pass to the end of the jetties at Destin can be very effective during redfish season.

The deeper schools of bull reds can sometimes be seen as a darker shadow moving across the bottom in the clear water of autumn. A live bait won’t last long when it moves into the view of the reds.

Rig Right- for You and the Fish

The good news about rigging during redfish season- bull reds can be hooked and caught on a wide range of different gear. The bad news about rigging for bull reds? Anglers should not go too light when they fish for big reds.  A hooked red that is fought for over ten minutes on light gear is not a good situation. Big redfish are great catch-and-release game fish, just as long as they are not allowed to fight themselves into exhaustion. It’s important to use gear heavy enough to get hooked bull reds to the boat for healthy release.  Very light gear simply over-stresses bull reds, and they may not recover from the fight. 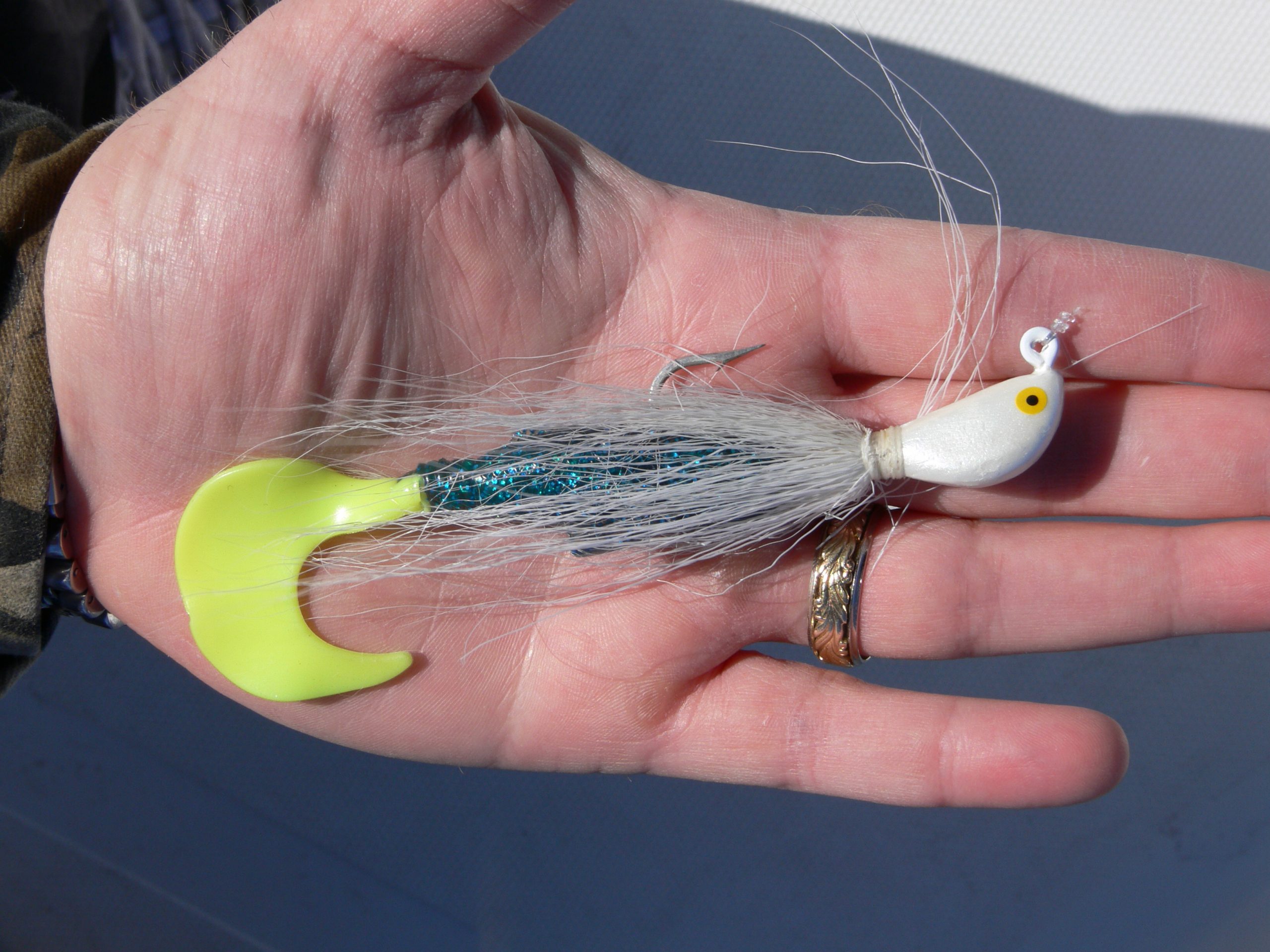 Medium to heavy spinning or level wind rigs are the best choice. Line strength of at least 20 lb. is acceptable, but 30 lb. test mono or braid is better.  This weight line allows anglers to have fun with big reds, but it enables the big fish to be worked to the boat quickly.

These big reds are the brood stock for our Gulf Coast inshore redfish, so they need to be protected as they are caught. Anglers should be happy to find, hook and catch and then release these wonderful big bull redfish. 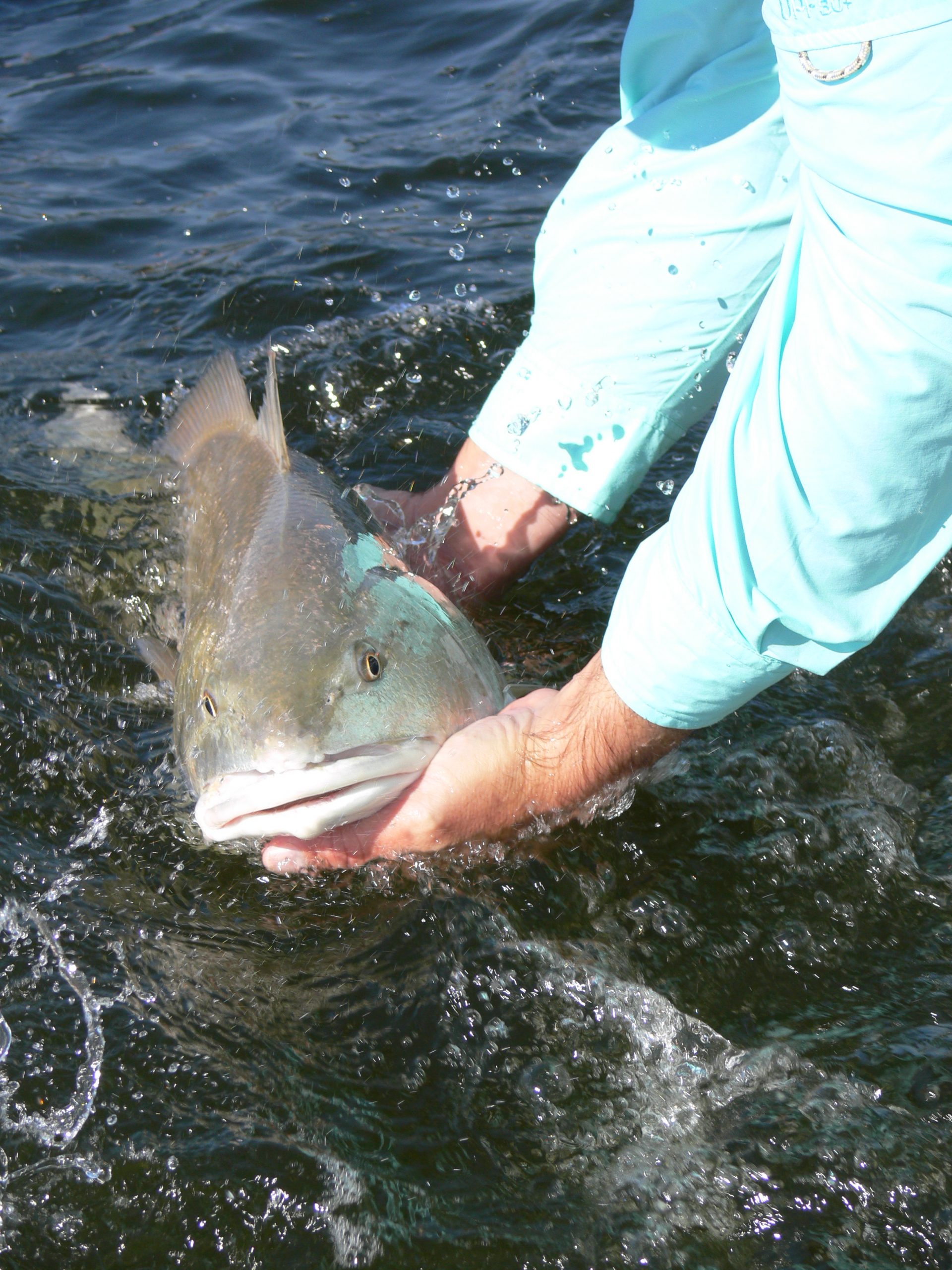 After a good intense and short fight, this is the correct way to release big reds.

A quick photo shoot and a safe release of these big bull redfish after a short and fierce fight should be enough for any fall coastal angler to stand up and holler, “Roll Tide- Redfish Tide, that is.” 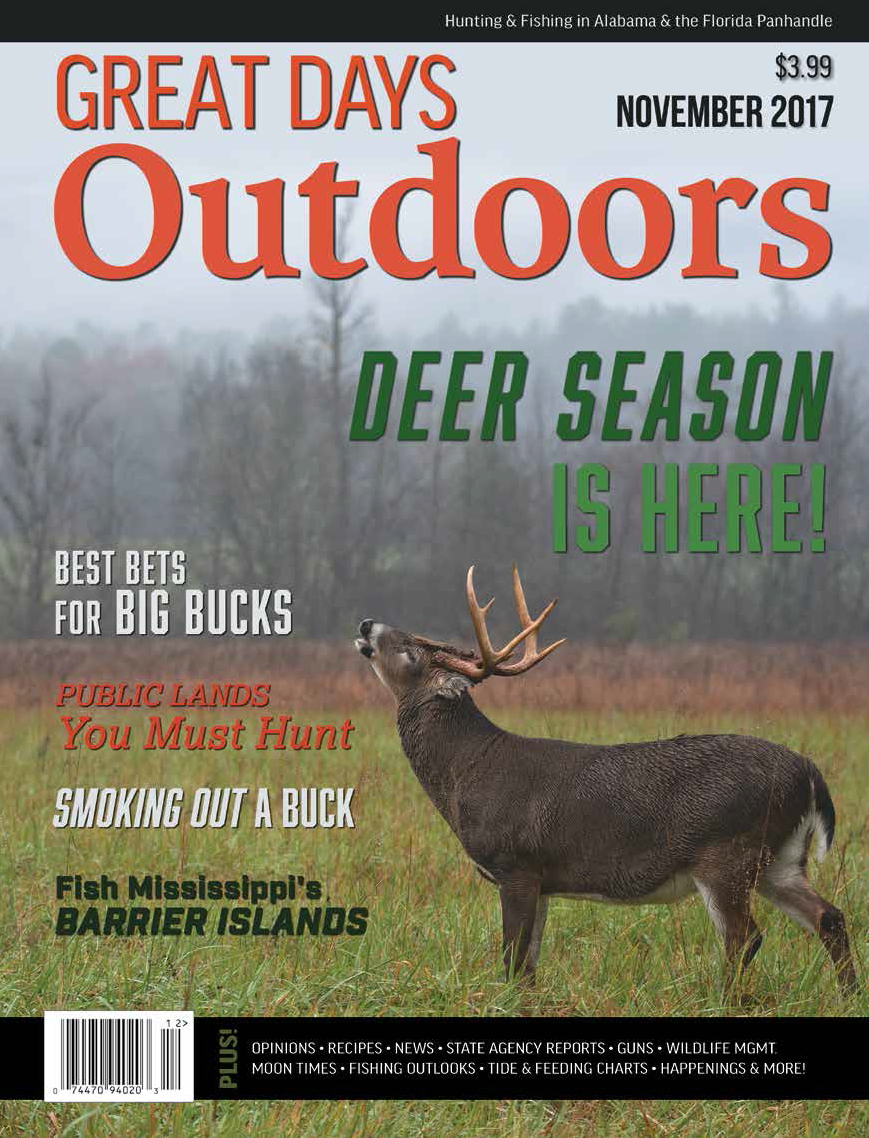 This article first appeared in the November 2017 print issue of Great Days Outdoors Magazine. For more great hunting and fishing content for the deep South, subscribe to Great Days Outdoors print and digital editions or click the image to download this issue.