Catfish Rigs for Rivers Taught by the Experts

The Mobile Delta’s rivers, streams, and backwaters are home to some of the finest catfish to be found anywhere, and anglers who have not tried this great Mobile Delta fishery are missing out on some truly great delta catfish dining and some wonderfully fun delta catfish fishing. When picking the perfect catfish rigs for rivers, the secrets of the fisherman of the Mobile Delta can be applied to just about any river in the country.

It’s hard to beat a freshwater game fish that gets big, fights hard, and tastes great. We might suggest that any fish that meets these standards might just be the perfect freshwater fish for any angler. And right now, this angler is being treated pretty badly by a good-sized perfect freshwater game fish. My heavy spinning rod is bent way over, my 25 lb. test line is being stressed considerably, and my reel’s drag has been protesting its bad treatment by squealing and squalling loudly when the big fish has made runs.

Finally, I begin to work the big fish closer to the side of my boat, and then there it is, about ten or twelve pounds of perfect Mobile Delta game fish. Small beady eyes stare up at me, whiskers fringe the fish’s mouth, and a smooth, blue skin shines in the sun. It’s a fine blue catfish.

After I unhook this hard-fighting fish, I slide it into the ice chest with a few other perfect freshwater game fish where it will wait for a while before becoming the main course of a wonderful Gulf Coast fish fry dinner.

Larry Scott is a man who knows a lot about catfish rigs for rivers of the Mobile Delta, and he knows a lot about catching them, too. He says, “I’ve been catfishing on the Delta for probably 55 years. I was taught by my grandfather who ran a seafood market, and by the time we were ten years old, we were catfishing.”

Scott operates Scott’s Landing, a local Causeway landmark boat launch, and tackle shop, and when he’s not helping other folks get on the water, he’s usually out on the Delta catching catfish. Scott’s Landing is just one of many places on the Causeway where anglers can put a boat in and then motor or paddle upstream or downstream to find great catfishing action. The advantage of using Scott’s Landing as a starting point is that Larry Scott will be there, and he knows where the fish are, too. 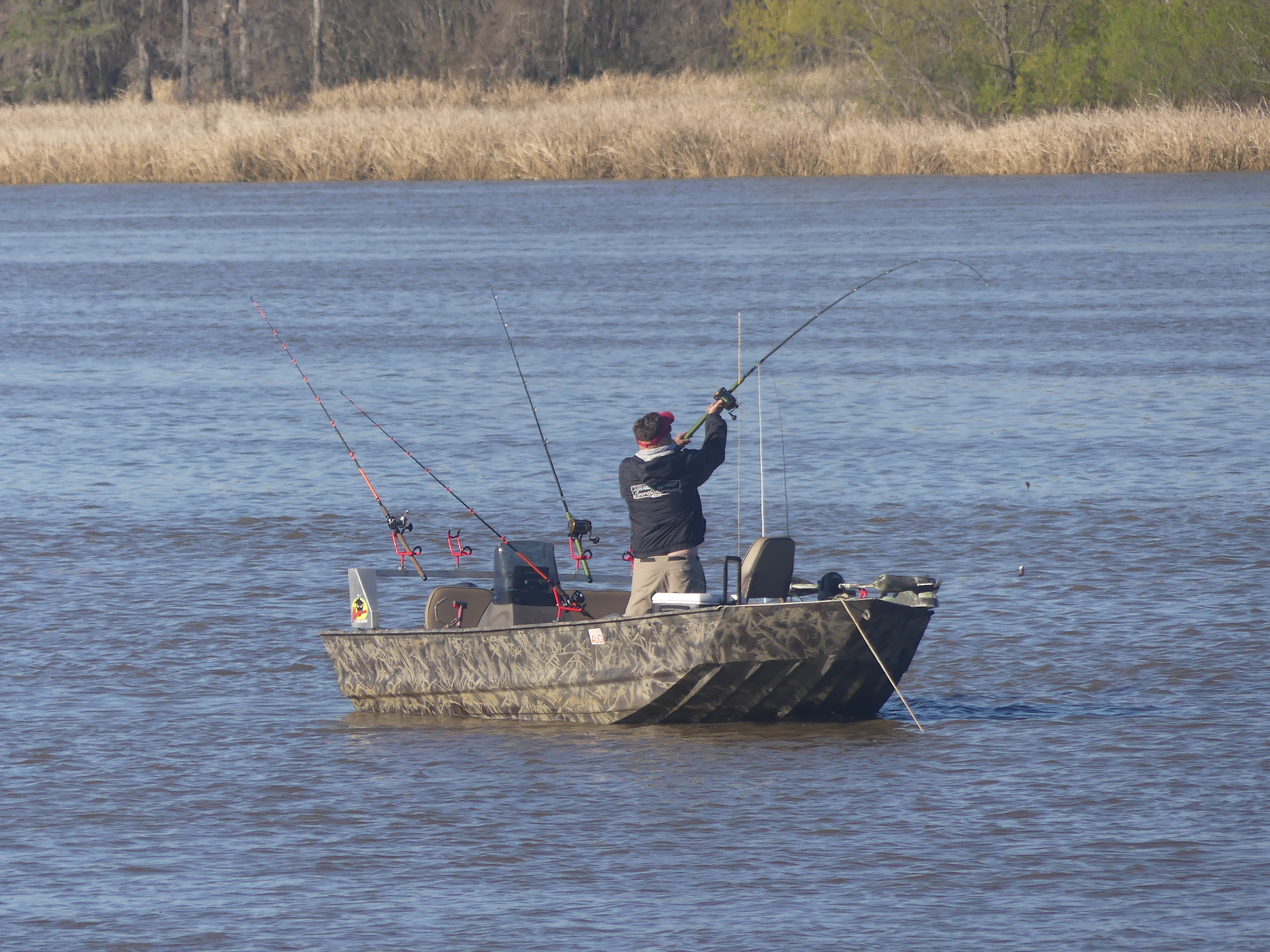 This catfish hunter is rigged and ready. Multiple rods increase the chances of finding better fish.

For most recreational anglers, a rod and reel will catch plenty of catfish from the Delta to supply their family’s eating needs. And a big catfish on a rod and reel is a whole lot of fun. A rod and Reel is one of the key catfish rigs for rivers, let’s learn what you need.

Larry Scott says, “A medium-heavy rod and reel setup will work. A 20 lb. braid line and a leader to match is good. I use a 2/0 stainless ‘J’ hook because it stays sharp longer.”

Choosing the right bait is crucial for catfish anglers. Scott says, “The biggest mistake folks make when they go catfishing on the Delta is using stink bait and rotten bait. The fresher the bait used, the better. It’s just like crabbing. Fresh cut bait stays on the hook better, releases more oils to attract the fish. It’s just better to use fresh bait.”

Cut mullet is always a good choice for Delta catfish, but fresh shrimp works well, too. For big flathead cats, or as they are known by locals on the Delta, “yellow cats” require live bait such as bream, which is their preferred food.

Anglers on the Delta looking for big, mean catfish won’t go wrong by starting in water from 18-25 feet deep. Better catfish tend to gather in deeper water like this, and anglers can soon determine if the big cats are in the vicinity or not.

Trot Lines are an one of the most effective catfish rigs for rivers, these multi-hook rigs can collect a lot of catfish when they are set properly.

Larry Scott advises trotline anglers, “Remember that when a trotline is attached to the shore, there must be a six-foot section of the cotton line included in the run of the main line. A trotline often has 30-35 hooks six feet apart on dropper lines. There should be a weight between every five hooks to help keep the line on the bottom. Half a brick works well. A big rock anchors the end of the trotline to the bottom.”

Scott says that he baits up his trotlines in the evening and then makes an early morning run to check the results and collect the catfish.

Scott advises potential trotline anglers, “Big catfish on a trotline can whip you. There’s no play in a trot line, and big catfish can work you. I’ve hooked big blues, 80 to100 pound fish, too big for me to get in the boat.”

Catfish anglers on the Delta can have a whole lot of fun catching catfish on jug or noodle lines. These are simple to rig. A gallon jug or a two-foot long section of foam swimming pool noodle with hard plastic reinforcement inside the noodle has a line with a hook attached, and these jugs are allowed to drift free with the current. When a catfish takes the bait, the jug or noodle will dance and start to move. Anglers can catch a lot of catfish using this technique, and small kids love to help with the spotting and chasing down of dancing jugs. While jug fishing is one of the great catfish rigs for rivers, be sure to check your local laws to be sure they are legal for your area.

And How’s the Fishing? 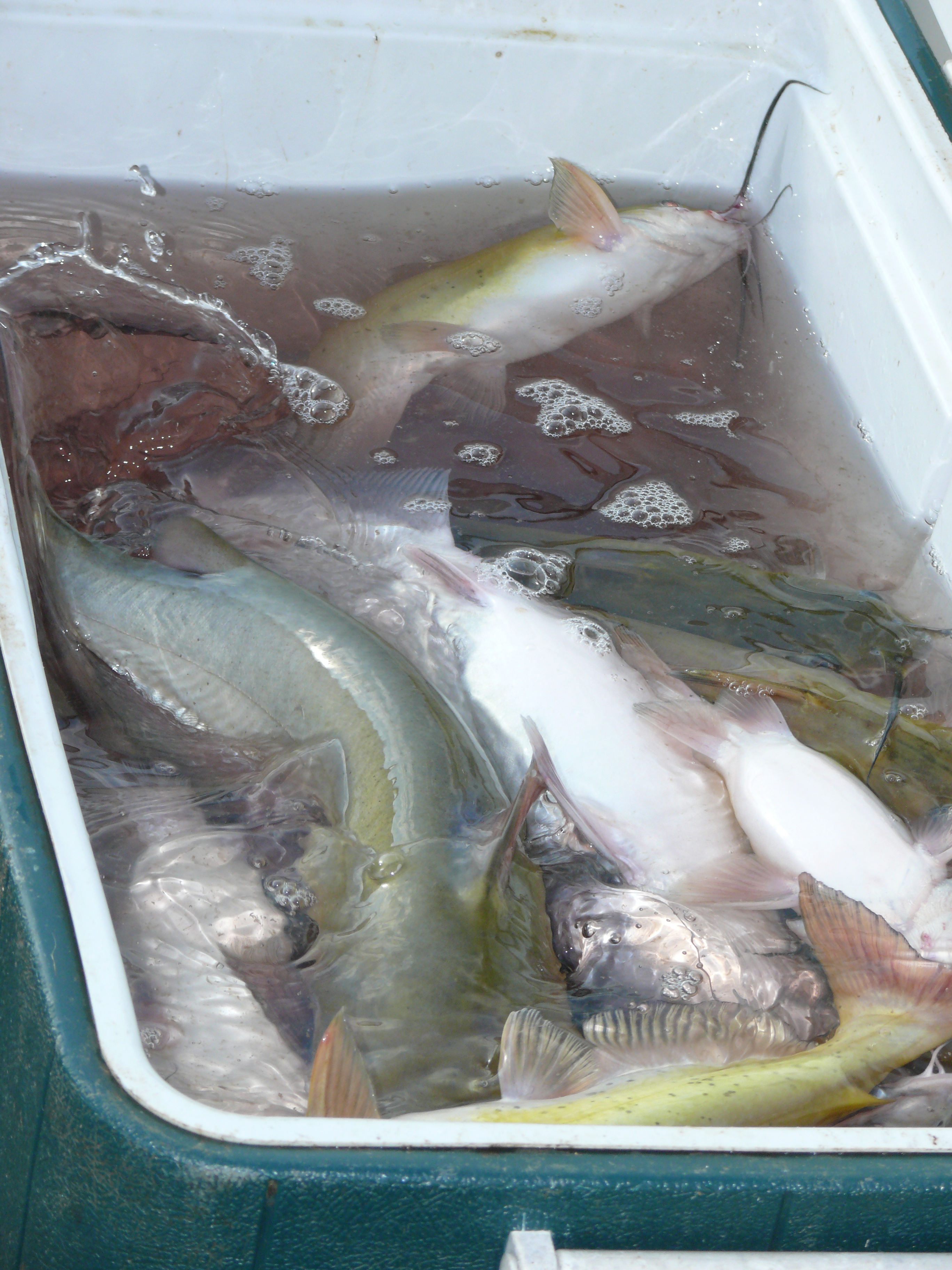 Here’s what we’re after. An ice chest full of catfish will provide a feast.

All of the big three species of catfish caught from Delta waters are native fish. Mobile Bay’s feeder rivers are just about the eastern end of the natural range of both blue cats and flatheads.

Larry Scott has spent his life on the Delta using every different variety of catfish rigs for rivers, and he says, “Delta catfish fishing is just as good now as it’s ever been. We’re seeing more big fish now. We’ve always had a good fishery, and it’s still very good.”

What Species to Expect when Delta Catfishing Fishing:

Blue catfish get very big on the Mobile Delta. Blues up to twelve pounds are fairly common, and anglers using the proper catfish rigs for rivers will catch them up to 30 pounds on occasion. However, there are some blues a lot bigger than this.

Larry Scott says,” A 96 pounder was the biggest blue cat I’ve caught, and I’ve caught thousands of 50 to 70-pound blues.”

These aggressive and very strong fish are active predators, and anglers looking for flatheads will want to obtain some hand-size live bream for bait. Bream can be used as bait as long as they are caught on rod and reel.

Look for these strong catfish near wooden cover, and fishing at night can be very effective for them as they are much more active at night.

These are the classic freshwater catfish, and anglers can expect to encounter them all over the Delta waters from the big main rivers to far up the smaller feeder streams.

Channel cats can get big, but the best-tasting fish will run from three to five pounds.

Learn From the Professionals and Old Timers

Water levels on the Mobile Delta system can vary greatly according to upstream rain and local rains, too. Anglers must learn to read the water and adjust their delta catfish fishing according to the water levels and the time of year.

When the water is high and the main rivers are in flood, anglers on the Delta can still find great catfishing.

Larry Scott says, “When rivers are in flood, fish up in creeks to get out of the strong current. When the water goes down, fish on the bottom anywhere. In spring, catfish anglers do very well by fishing from Gravine Island up to Upper Bryant Landing.”

In winter, the catfish tend to move farther south in the Delta, and places like Bay Minette Basin, Grand Bay, and even out toward Mobile Bay can be good.

The Battery at the mouth of Apalachee River can be a very good place to find catfish for much of the year.

A very special time for catfish anglers is during the fall when the days shorten and much of the life in the swamps starts to relocate toward the open waters of Mobile Bay.

Scott says, “In October and November, real good shrimp filter out of the swamp, and bass, specks, reds, and delta catfish fishing gets good. We catch good catfish during fall because everything is eating in fall. In fact, it is possible to catch multiple species of fish in the rivers of the Delta in fall. We’ve caught specks, reds and big blue catfish while sitting in the same place and fishing the same bait, live shrimp. Fall is a special time for anglers on the Delta.”

Dave Armstrong, Biologist and Fisheries Supervisor for District Five of the Alabama Division of Wildlife and Freshwater Fisheries tells us that when the water in the lower Delta rivers gets low and salt water from the bay begins to creep up the rivers, the catfish go somewhere else.

Armstrong says, “Cats are fairly sensitive to salt water. When the water gets to 8 to 12 parts per million, that’s about one-fourth the strength of seawater, it starts to stress freshwater catfish. We see the greatest chances of saltwater stress to Delta catfish in September when the rivers are low. The catfish will get pushed up the rivers away from the saltwater filtering in from the bay.”

Although access to a boat will put catfish anglers on the Mobile Delta in contact with a lot more fish, shore-bound anglers armed with the right catfish rigs for rivers can still do very well. In particular, the shelly beach area of Meaher Park which lies between the Causeway and I-10 is very good for catfish, especially when the river is up and the water is very fresh,

Anglers at this place can drive right to the water and unload and set up for some good catfishing.