Nothing says springtime quite like catching a big mess of bream.

There’s nothing like simple pleasures for simple minds. So, I guess I have a very simple mind because one of my true pleasures in life is watching a small float make a quick dip and dive.

When my line comes tight and the fish on the other end makes some high-speed, hard-pulling circles in the water, I know that one of my favorite fish has come to call. The simple joy of dropping a baited hook in a promising spot and having a big, dark springtime bream bite the hook and then fight hard all the way to my hand brings me about as much pleasure as hooking into a much bigger saltwater fish.

I’ll admit it; I’ve loved bream fishing since I was a little boy fishing with my dad, and that’s a very long time ago.

When considering the many ways to catch a good mess of bream, also consider the many species of bream that call Alabama home. But no matter what the species and what kind of fishing technique is used, catching bream is just plain fun.

Where to Find the Big Ones

Wherever freshwater is a permanent feature in Alabama, some sort of bream will probably be found living and prospering there.

Big northern lakes, the major rivers which flow through Alabama, and small bayous and backwaters off bigger waters can all be great locations to find and catch springtime bream. However, to find the biggest and strongest bream, anglers will need to keep a few things in mind.

First, even though bream are usually very aggressive and willing to take a bait very quickly, the biggest bream didn’t get big by being stupid.

When an angler finds a concentration of small bream, by simply fishing a bit farther off the bank and in deeper water, the chances are better than the bigger fish will be found there.

Also, if the bream angler wants to find the biggest fish, look for some kind of structure. Underwater logs are excellent. Fallen timber from shoreline trees are prime hideaways. Big rocks in the water are often fish havens. And if a rise or hump can be found in the middle of the pond, lake or river being fished, that can be the next thing this side of paradise. Bream love to orient to solid structure.

“Bream are found in all major rivers, and some of the big lakes are world-class locations for bream fishing. However, it’s hard to beat a private pond or small lake for some great bream fishing.”

Having said that, we also have to allow that sometimes—in fact, quite often—some very big bream will be encountered in deep, open water. No cover of any kind will be close. Much of the time, these big bream are eating aquatic insects that are hatching and coming to the top of the water where they emerge and fly off to complete their life cycles.

Alabama bream are found in all major rivers, and some of the big lakes are world-class locations for bream fishing. However, it’s hard to beat a private pond or small lake for some great bream fishing. If a private lake that receives very little or no fishing pressure can be found, and if permission from the owner can be arranged, a bream angler stands to have a memorable day bream fishing.

Even though bream are not the brightest lights on the Christmas tree, they do get wise to heavy fishing pressure. The big ones soon learn that seeing or hearing people on the shoreline means it’s time to stop feeding and go hide. So, if a low-pressure small body of water can be found, some really big bream can be caught. 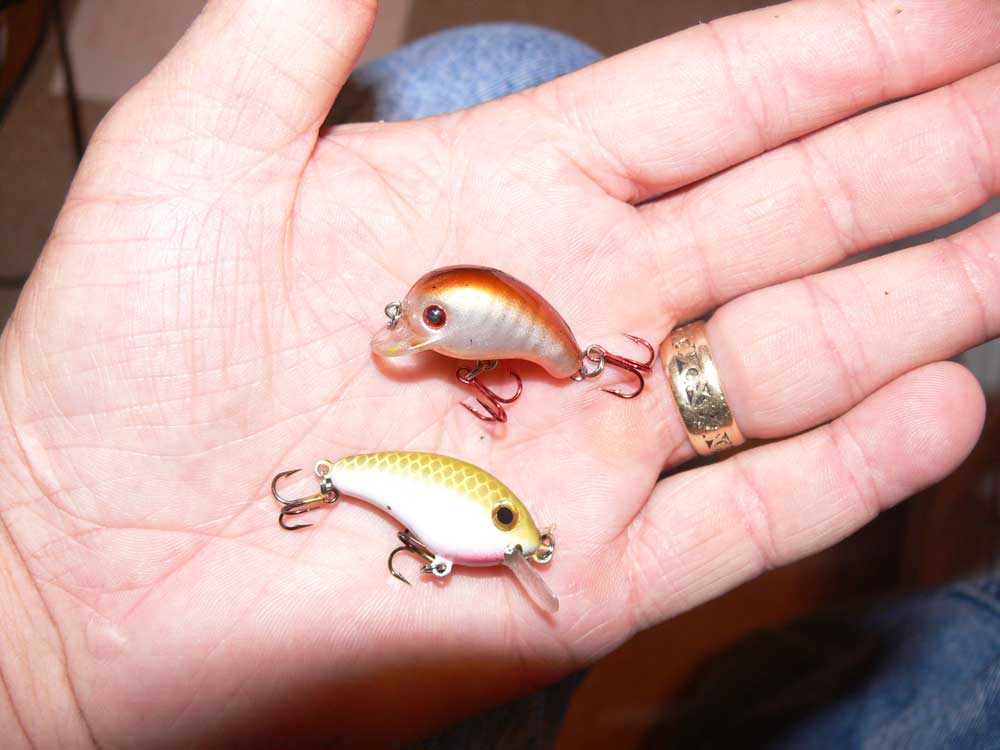 Let the little crankbait sit floating for a while after each cast. Photo by Edmashburn

How to Rig for the Bigger Bream

Rigging for bream fishing can be simple. Tons of bream have come to hand for anglers who use nothing more than a cane pole, a small hook, and worms or crickets for bait. This is the best setup for introducing kids to the art of bream catching.

However, when it comes to catching the biggest and smartest of the bream, many anglers prefer an ultralight spinning rig. A lightweight rod and matching reel that can handle a six-pound test line is just about right. A small spinning rig allows long distance casts with both live bait and tiny artificial lures. And by making long casts, anglers can escape being seen or heard by the bigger bream.

You will discover a wide range of well-made and very effective artificial lures have been designed to catch panfish such as bream. Tiny floating/diving crankbaits can be deadly on big bream, and a tiny Beetle-Spin or in-line spinner can be very effective on the bigger bream.

By the way, a very effective way to catch some very big redear bream—shellcrackers they are often called—is to slowly retrieve a tiny spinnerbait along the bottom near fallen timber. When a three-pound redear takes a small spinnerbait, there’s nothing gentle about either the strike or the fight.

One of the most effective ways to catch a mess of big bream, especially when the fish are on the beds spawning (as they will be in all Alabama waters in April), is to use a very small—1/8 to 1/16 oz—jighead with a very small two-inch soft plastic worm.

Color doesn’t matter much at all to bream with soft plastic lures. Cast this mini-worm rig into the bedding area, but hold on tight. Bream will absolutely crush a properly-sized jig and soft-plastic lure that is worked slowly through the bedding area.

Of course, the surest bet to assure catching a mess of April bream is to use live bait. Put a bream hook on the end of the line, a small split shot above the hook, and a quarter-sized or smaller float a couple of feet above the sinker. Bait up with a cricket or red wiggler worm and toss this near solid structure.

When the float disappears, the fun begins.

Now, for some really extreme live bait fish for bream, anglers can try this. On most of the rivers and streams that enter into Mobile Bay, the shorelines will have reeds and other waterplant growth.

If an angler can use a seine net or just a dip net to dig into the reeds or grass, sometimes a bunch of tiny, one- to two-inch-long shrimp can be encountered. When this happens, the world is looking good for a world-class bream fishing trip.

If a lucky bream angler can find and collect a bucket of these “grass-shrimp,” some very big bream can be expected. Big bream love to eat these tiny shrimp, and one or two on a bream hook dropped into deeper water near cover is just about a sure bet for the biggest bream in the water.

Fly Fishing—the Fun Way to Collect a Mess of Bream

Catching bream is fun no matter how we go about it, but for maximum pleasure, it’s hard to beat casting a fly on a fly rod and having a big bream come up and engulf the bug.  Although effectively using a fly rod is harder than using spinning gear, the truth is an angler doesn’t really have to be very good at fly-casting to catch a bunch of bream on the fly rod. I’m proof of that.

Bream love to eat bugs, and a fly rod can present a fake bug better than any other fishing technique. A popping bug (it can be any color in the world as long as it’s yellow) is without a doubt almost always too much for any bream to resist. Short 30-foot casts can put a bug over some big bream. By being patient and slow in the retrieve, anglers can find some great bream fishing on the long rod.

In fact, just about the best fly rod popping bug retrieve is no retrieving at all.

Seriously. Just cast the bug out, perhaps give it one very slight movement, and then let it sit. If the bream are there, they will know the bug is floating on the surface. Before long, one of the big fish will not be able to stand seeing the free food sitting there and will flash up and strike.

A very old-school but very effective way to collect some big bream is to use a double rig. On the leader, have a popping bug tied up the leader about a foot, and then on the end of the leader, tie on a sinking fly of some kind.

Anything dark and buggie-looking will work, but it’s hard to beat the old “Bream Killer” rubber-legged black-and-white sinking fly.

Most of the time, the bigger bream will take the sinking fly, but sometimes a double hookup happens when two big bream decide they both want to eat at the same time. This is almost more fun than the law should allow.

A good thing about fly-fishing for bream in Alabama in April is that anglers don’t have to spend a lot of money on the gear. Bream don’t require world-class fly rods. Anglers who want to try the fly-fishing game can use a $50 setup and do very well.

There’s no reason to spend hundreds of dollars on fly rod equipment used to catch bream. 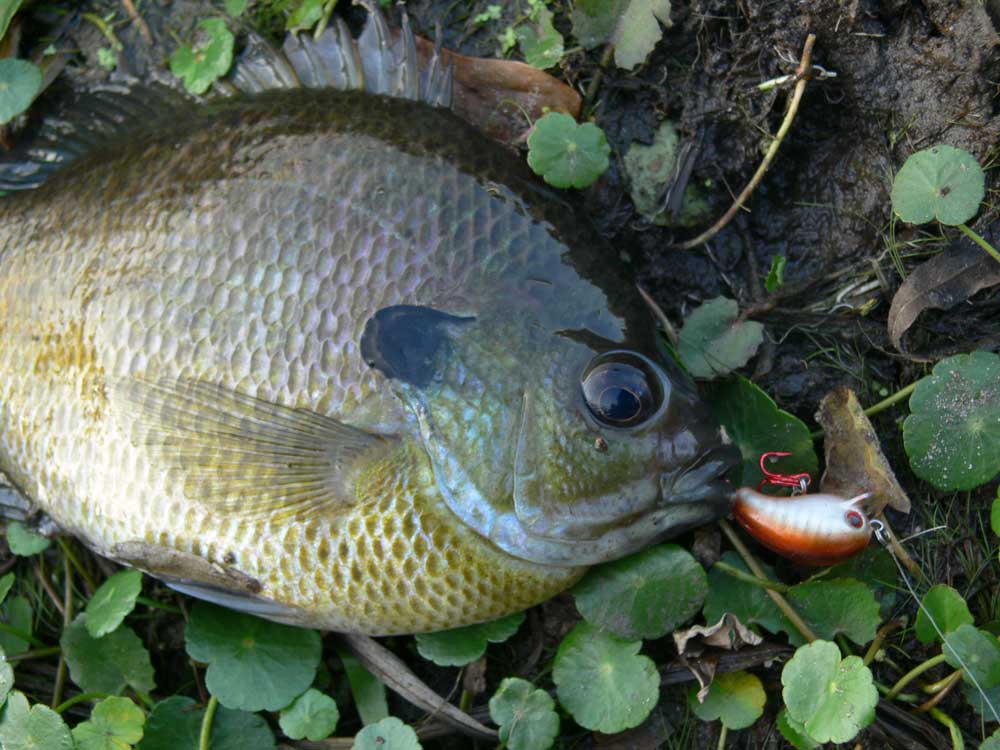 After the Bream Fishing Trip

Anglers who love to catch bream in Alabama are in luck. The limits are generous.  Anglers can catch and keep fifty bream a day, no matter the species. That’s a lot of fish. But bream are very prolific breeders, and keeping a fifty-fish limit won’t hurt the population of the lake or stream at all.

Also, fried bream is a gourmet’s delight; one of the best eating fish to be found. Big slab bream—a pound or more—can be filleted for frying, but the smaller fish just aren’t big enough to fillet. These smaller bream are still delicious, and by simply heading the fish and scaling it, anglers (and fish eaters) can enjoy a mess of some of the best fried fish to be found anywhere.

Just roll the headed and scaled whole fish in hushpuppy mix and drop it in deep hot oil. When the fish floats to the top of the hot oil, it’s ready for the plate. By the way, when fried this way, the tail fins of the bream are the best parts; just saying.

Mix a big platter of fast-fried bream with some coleslaw, macaroni, and cheese, plus a big glass of iced tea and, well, things don’t get much better than that in Alabama—or anywhere else in the world.

Fishing for big Alabama bream is a wonderful way to have some great days outdoors.