Let’s just assume that an angler has obtained a kayak for fishing and you are looking for the ultimate beginner fishing kayak setup.

Many anglers of all ages and sizes have discovered that these lightweight, easy to transport and propel boats are superb fishing platforms.

However, equipping these fishing kayaks requires some thought and planning to maximize the time spent on the water.  The first thing that new kayak anglers will discover when gearing up a new fishing ‘yak is that space is limited on all kayaks, and that gear and equipment must be kept to a minimum. 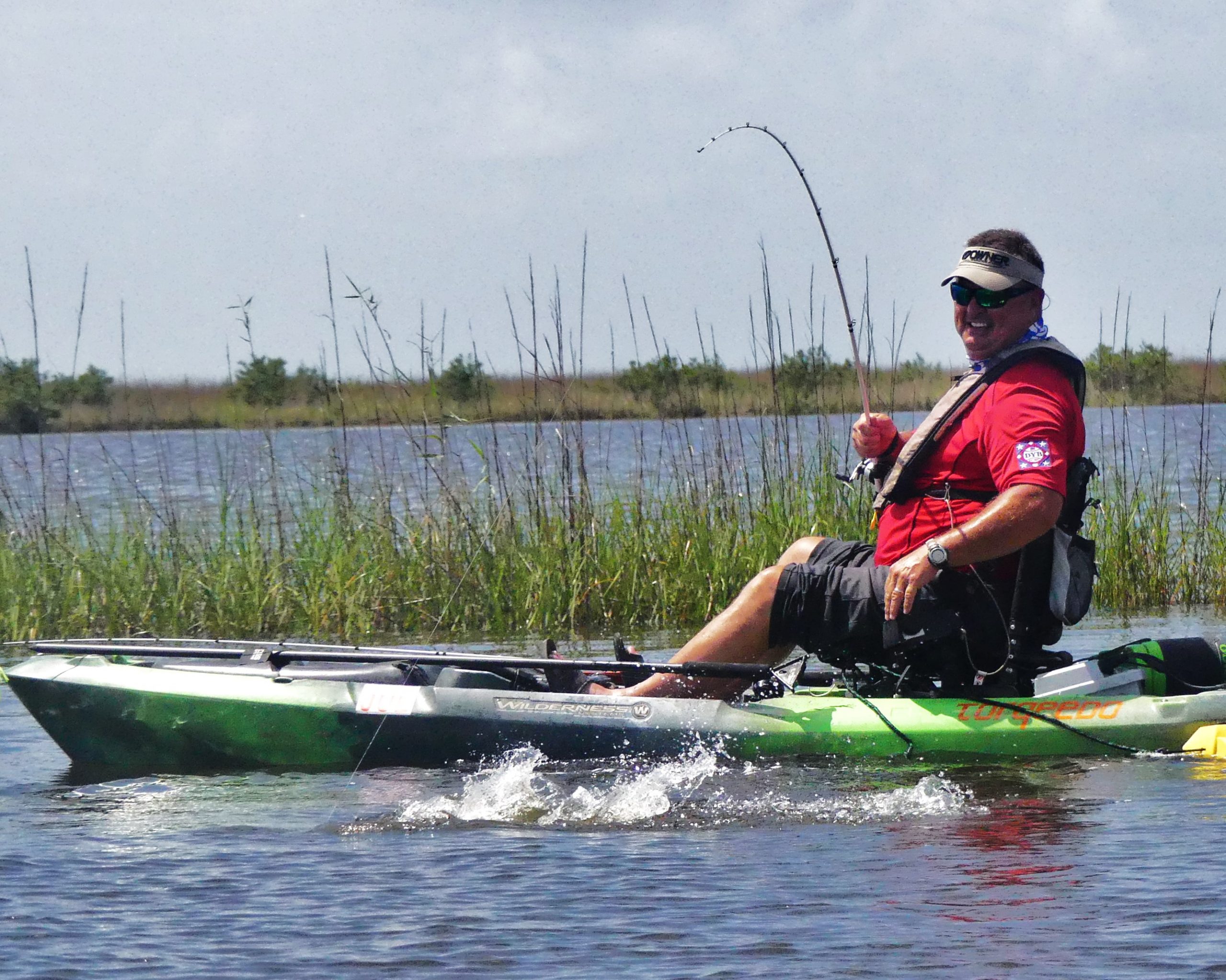 Tim Perkins, a kayak fishing tournament repeat winner shows that the key to kayak gear selection is to keep it as simple as possible.

There’s no room for anything on a fishing kayak setup that is not used often.  So setting up a new fishing kayak is not a matter of filling up space with gear, but rather a process of determining what is needed and what can be left home in storage.  This process can take some time on the water and some careful observation, but most anglers quickly come to really enjoy their kayak fishing with its limited amount of gear and equipment.  It is minimalist fishing at its best.

The following is what we’ve discovered about selecting basic kayak fishing gear in our long-time experiences chasing fish of all kinds and in all kinds of waters.  When outfitting your new kayak keep in mind that the most important to keep in mind is that every kayaak angler is different and has different needs.

The absolute first gear purchase for a beginner fishing kayak setup is simple, a personal floatation device (PFD) that can and should be worn at all times when on the water. Any kayak angler who claims to have never rolled over a kayak or fallen out of a kayak is not telling the truth or hasn’t been on the water very long. Accidentally getting in the water happens to all kayak anglers.

The most expensive PFD is worthless if the angler is not wearing it when an accident happens.  So each new kayak angler will have to select the PFD that suits her or him. 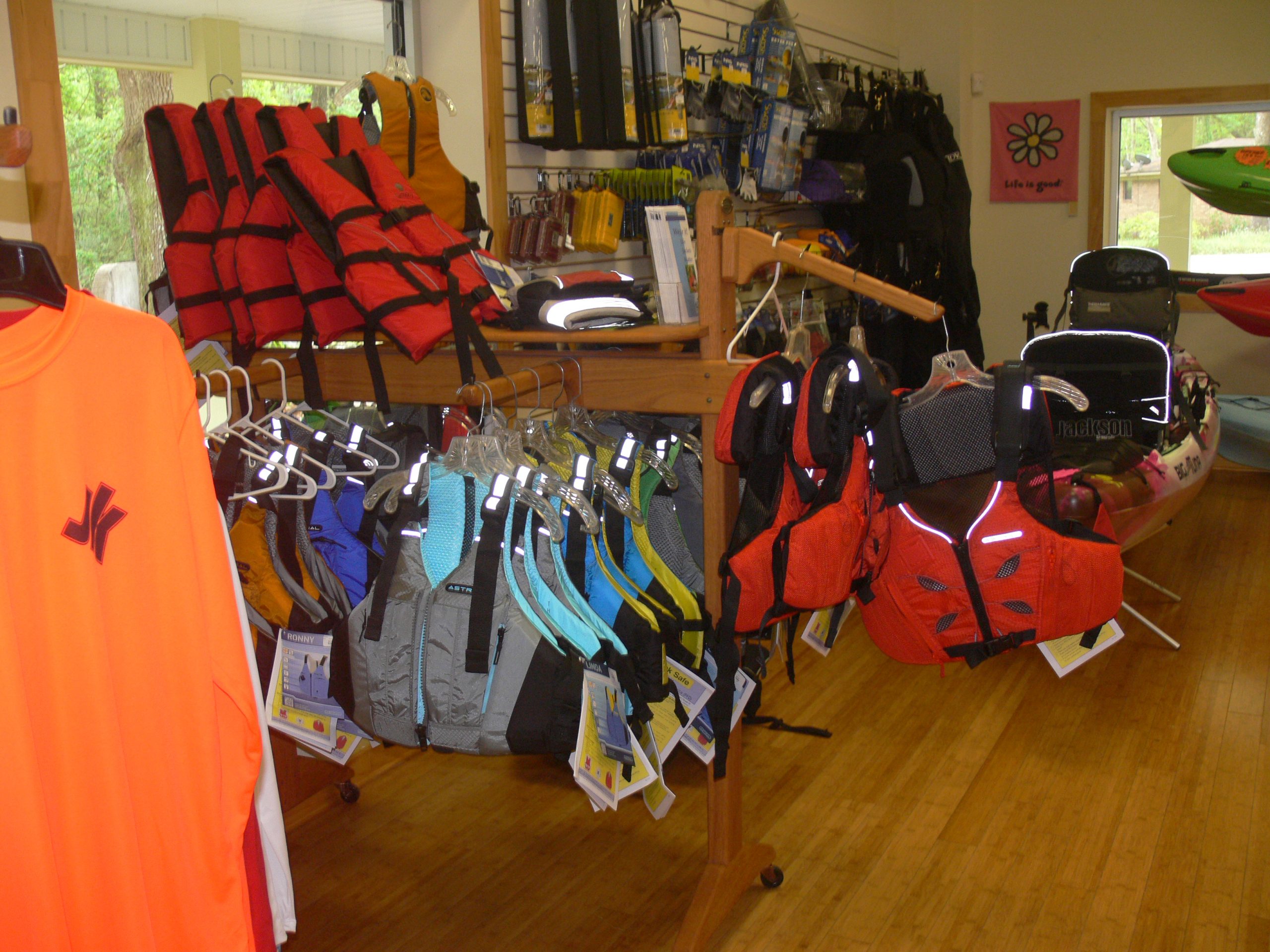 Make a good selection of PFD for best fit and comfortable use.

A wide range of styles, colors, and features come on modern kayak PFDs.  Some really small and lightweight inflatable PFDs are on the market for kayak anglers, and these are very nice.  I have one of these devices and it does not intrude on my fishing at all.

For woman kayak anglers, many PFD makers offer new kayak devices which are designed for the female form and which are much more comfortable than the traditional devices which were made to fit men.

New kayak anglers will want to visit a local kayak shop and look through their PFD styles and sizes to find the unit which fits best.  Trying to save a few dollars by buying a thick, heavy, hot, uncomfortable PFD which is a torment to wear is a mistake. Spend a little more money and get a PFD that fits and that will be worn.

Next, a paddle that fits

Even if a new kayak angler buys a top of the line pedal-powered kayak, a paddle is needed for back-up propulsion situations.  And traditional kayaks must have a good paddle for the angler to enjoy most efficient movement on the water.

It’s not easy to select the paddle which best fits a particular angler. Arm length, boat width, strength of paddler, water being fishing, all of these factors and many others must be taken into account when selecting a paddle for a fishing kayak.

The one thing certain about kayak paddles is that the paddle which comes with most new kayak purchases probably will not be the best fit for the new kayak angler. 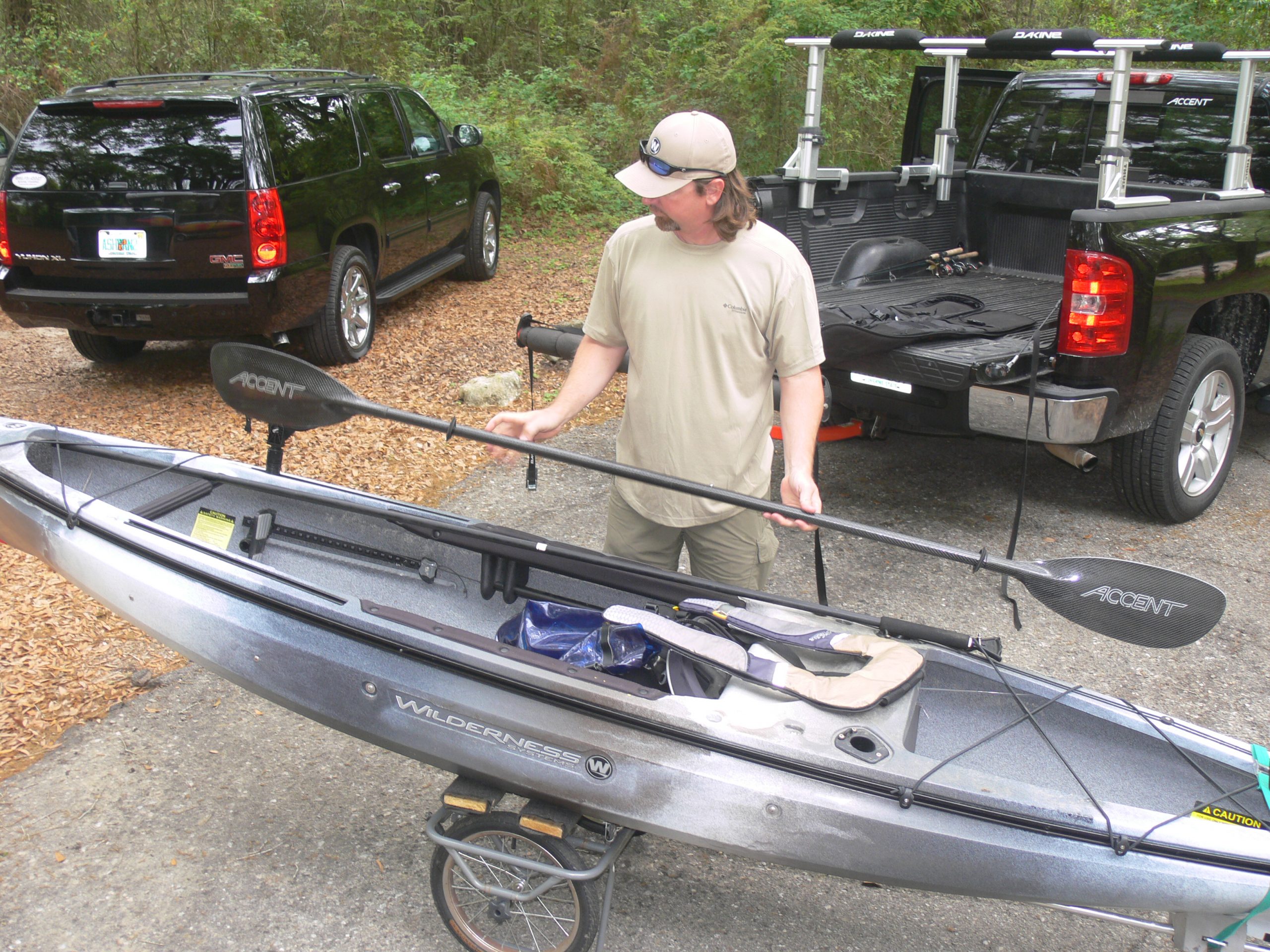 Again, trying out several paddles at on-the-water demo days held by most kayak shops is the best way to try out and select a paddle that fits.  Paddles for your fishing kayak setup come in a wide range of materials, sizes, and prices.  In most cases, a lighter, stronger, and yes, more expensive paddle will work better than heavy, cheaply made paddles.

Keep in mind that on a kayak fishing trip, the angler will use the paddle many, many times over the course of the day, and just a few ounces in lighter weight of the paddle can make the day a lot easier and more enjoyable.

Most new fishing kayak setups give anglers a lot of options for storage.  Most kayaks have built-in dry storage for gear that needs to not get wet such as spare clothes, food, camping gear for overnight kayak fishing trips, not to mention personal items like wallets, cellphones and more.

For the actual fishing gear, most anglers want to have everything close at hand and up on top where it can be easily accessed.  All fishing kayaks have deck tie-downs and recessed platforms behind the paddler where gear can be stored. 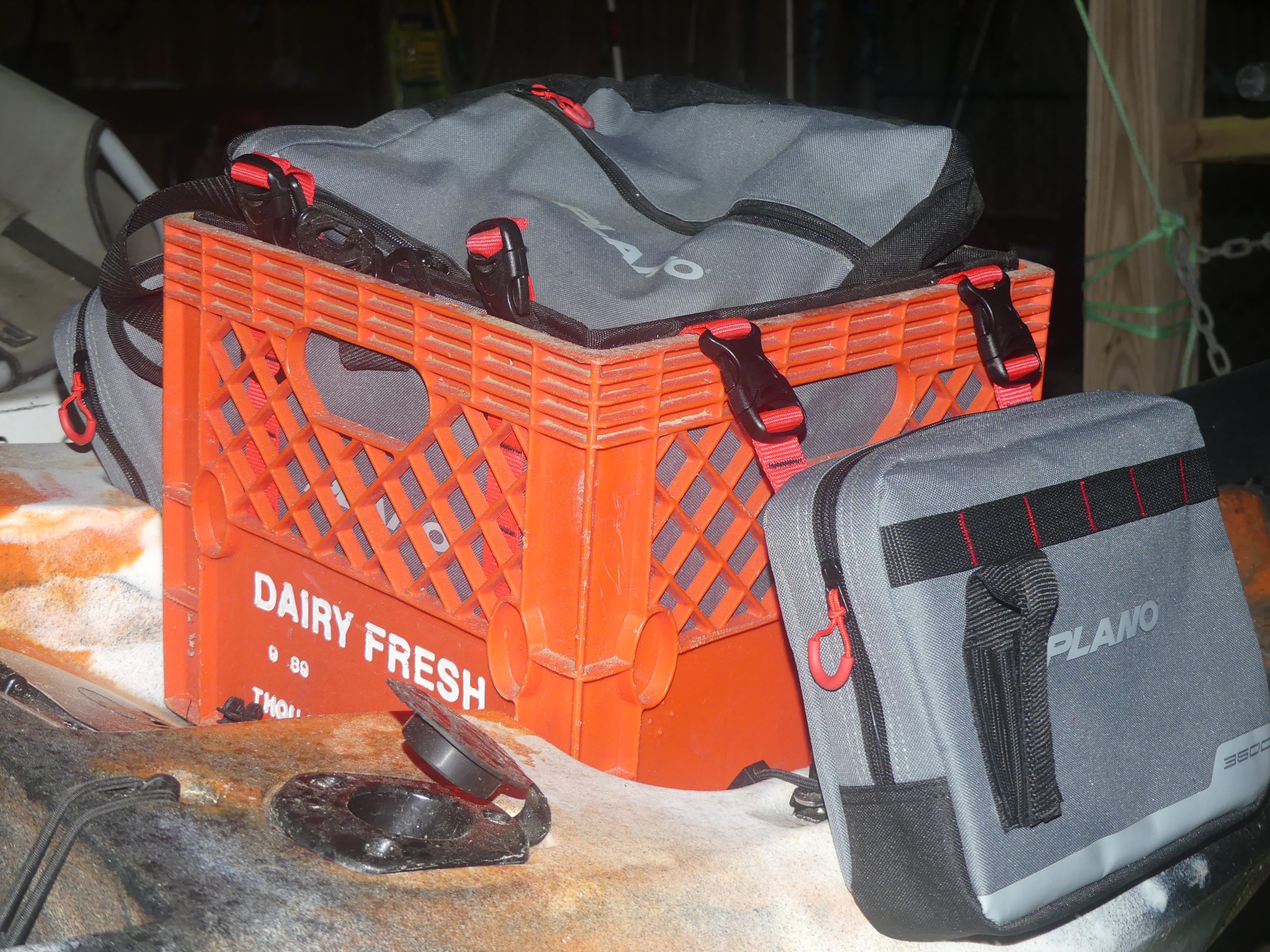 The traditional storage unit for kayak anglers is a simple plastic milk-crate which can be secured to the kayak with bungee cords and which provides easy gear access at all times.  Gear companies have developed some really nice slip in the crate gear bags which do a great job of keeping fishing gear safe and easy to reach.

And this is the easiest part of equipping your ultimate, beginner fishing kayak setup. Fishing kayaks don’t require an angler to buy anything new or special in the way of fishing tackle and gear. What an angler has and uses already will work just fine on a fishing kayak.

Everything from fly gear to spinning gear to heavy deep sea gear can be used on fishing kayaks. So anglers don’t need to look for special “kayak fishing tackle” at all, because the best kayak fishing tackle is the equipment the angler knows and uses well from previous experiences.

But the one thing new kayak anglers will have to do to maximize the fun on the water is to seriously determine what kind of lures will actually be used, what kind of live-bait equipment is routinely used and what rods and reels are used the most. Take this often-used tackle and gear, and leave the rest home. 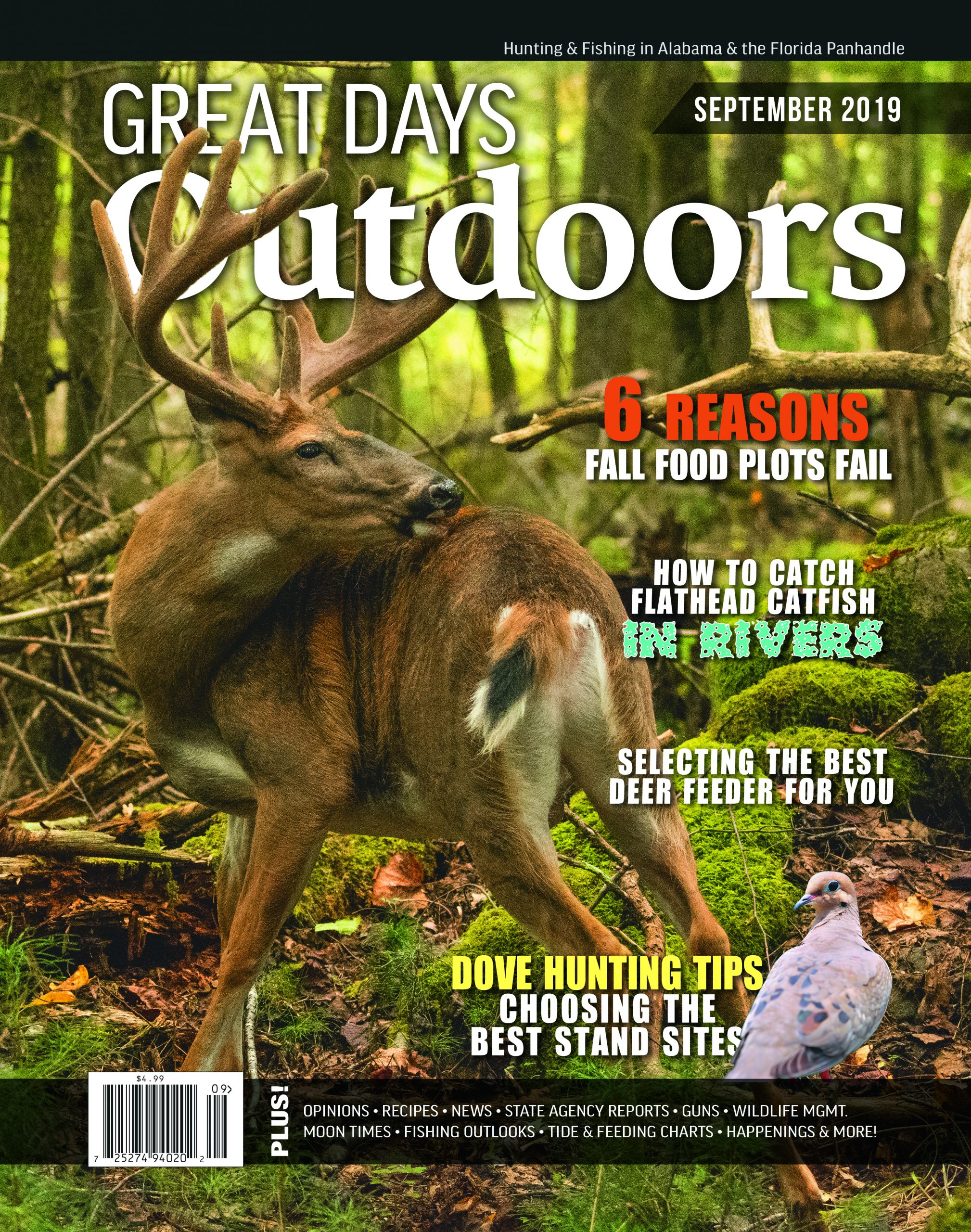 This article first appeared in the September 2019 print issue of Great Days Outdoors Magazine. For more great hunting and fishing content for the deep South, subscribe to Great Days Outdoors print and digital editions or click the image to download this issue.