Q & A: All About Ticks | Great Days Outdoors

EDITOR’S NOTE: Great Days Outdoors magazine asked Emily Merritt to provide some information on ticks. Merritt is a research associate at the Auburn University School of Forestry and Wildlife Sciences and is manager and field researcher of a tick and tick-borne illness study. She received her Master’s degree in wildlife sciences at Auburn University and her Bachelor’s degree in environmental science at Siena College in New York. Merritt is interested in exploring the role environmental factors, humans and wildlife play in the distribution and prevalence of ticks and tick-borne illnesses in the Southeast.

GDO: What is a tick and why do they bite?

Ticks are tiny external parasites that feed by sucking blood from host animals including mammals, birds, reptiles, and amphibians. In Alabama, there are several tick species, some of which carry illness-causing bacteria that can be transferred to the hosts they feed on. People who spend time outdoors, either in their backyard or the wilderness, are at risk of exposure to ticks and contracting a tick-borne illness. Hikers, hunters, outdoor workers, and other groups are more likely to be bitten by ticks because they spend greater time in wooded areas, forest edges, tall grasses, leaf piles and other areas preferred by ticks. Pets that spend time outdoors can be bitten by ticks and infected with a tick-borne illness. If pets come inside, they can bring ticks into a home and put people living there at greater risk of being bitten. 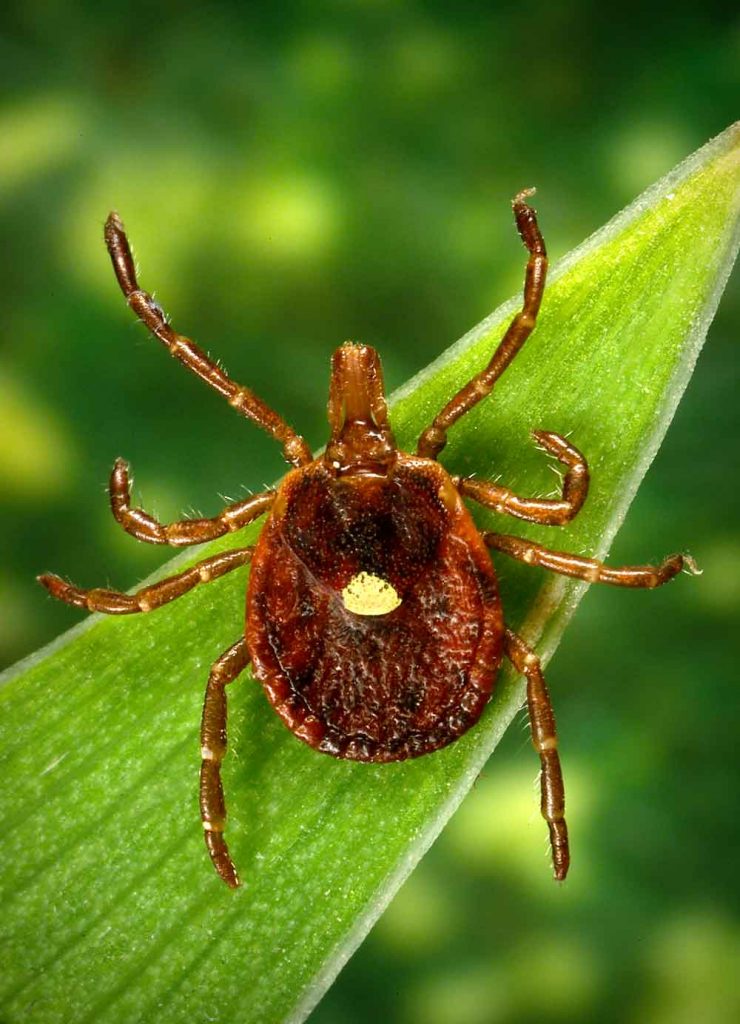 Lonestar ticks are the most prevalent in Alabama. Photo by James Gathany, courtesy of the CDC.

GDO: What species of ticks bite humans and pets in Alabama?

Lone star ticks are the most abundant tick species in Alabama. Adult females are easily identified by a single white dot in the center of their brown bodies, which lends to their name. The black-legged (also known as deer tick), American dog and Gulf Coast ticks are commonly encountered outdoors as well. All of these tick species will attach to humans and pets if provided the opportunity. The brown dog tick is found throughout Alabama and commonly infests homes, animal pens, and dog kennels. Unlike other species, they can spend their entire life cycle indoors and controlling infestation in a home can be difficult. While preferring dogs, they will feed on humans and other mammals.

GDO: How do ticks find hosts and what happens when they are attached?

“Ticks cannot fly or jump, but when a host brushes past, they can quickly climb onto clothing or fur.”

Ticks find their hosts by sensing animal breath, odor, heat, vibrations or shadows. They also find hosts by waiting or “questing,” on the tips of grasses and shrubs along well-used paths. Ticks cannot fly or jump, but when a host brushes past, they can quickly climb onto clothing or fur. Once on the body, ticks find a preferred spot and begin feeding. During feeding, a tick will slowly suck its host’s blood for several days. If the tick contains an infectious organism or pathogen, it could transmit that to the host.

GDO: Where are the most common places to find ticks attached to a human body?

Immediately after coming inside, check yourself, significant others and pets for ticks over the entire body. Carefully examine dark, moist places that bend and fold, including the hair and scalp, in and around the ears, under the arms, inside the belly button, under the waistband, the groin area, inside of thighs, where bras pull snug to skin, around the knees and ankles and between fingers and toes.

GDO: How should someone safely remove a tick from a body?

If you find an attached tick, remove it immediately. The longer a tick is attached, the greater the chance it will transmit disease. Be careful. Improper removal can increase the risk of infection. To properly remove and dispose of a tick, grasp the tick as close to the skin as possible with sterile tweezers or a tick removal tool like this one. Pull upward on the tick with a steady, even tug. After removal, wash and disinfect the area where the tick was attached. Wash hands and tweezers. Dispose of the tick by submerging it in rubbing alcohol for more than a day, wrapping it tightly in tape and throwing it away or flushing it down the toilet. When removing a tick, DO NOT touch the tick with your fingers. Also, do not scrape, twist or squeeze a tick, as this can cause the mouthparts to break off in the skin. Never burn a tick with a hot match or apply a substance, such as nail polish remover, petroleum jelly, gasoline, or soap, to the tick in an attempt to kill it while it is still attached. Do not attempt to dispose of the tick by washing it down a drain; it can crawl back up and into your home.

GDO: How can tick encounters and bites be prevented?

Preventative measures are the only way to avoid being bitten by ticks and acquiring an infection. Before going outside, put on light-colored long pants, a long-sleeved shirt, and close-toed shoes. Tuck your shirt into the pants and tuck pants legs into socks or boots. If you have long hair, put it in a bun or pull it up into a hat. Use insect repellents that contain greater than 20 percent DEET on exposed skin and clothing. Treat clothing and gear with products containing 0.5 percent permethrin. (see link) This is the most effective prevention when used according to the label. While outside, walk along the center of a trail to avoid questing ticks at trail edges and in tall grass. Do not sit on rotten logs or stumps since that is where ticks seek refuge. Always wear protective gloves when handling dead animals.

GDO: What should we do when we return home?

Immediately after coming indoors, carefully examine clothing, gear, and pets. Ticks can ride into your home and attach later. Tumble clothes in a dryer on high heat for 30 minutes to kill undiscovered ticks. Conduct a full body check in the shower or by using a partner or a mirror. You should do this for several days following potential exposure or make it part of your daily routine. Check skin for any bumps, scabs or dirt specks that might indicate a tick, especially on the scalp. If you feel something, do not squeeze or press it…check it!

GDO: How should we protect pets?

For pets, use a brush to facilitate full body checks. Look for ticks all over, but particularly around the face, ears, neck, armpits, thighs, belly, tail and toes. Consult with your veterinarian for effective tick control products, such as oral medication, impregnated collars or topical treatments. Protecting your pets will also protect you!

GDO: What illnesses can ticks cause?

Over the last two decades, the Southeast has experienced a dramatic increase in the number of reported cases of tick-borne illnesses. Knowing the symptoms is the key to prevention. Spotted fever is a group of closely related bacteria that includes Rocky Mountain spotted fever and is the most commonly reported tick-borne illness in Alabama. Symptoms begin in a few days to two weeks after infection and include fever, headache, muscle pain, lack of appetite, nausea, vomiting and abdominal pain. Most people develop a spotted red rash, typically around the wrists and ankles at first. This rash can spread to the entire body.

GDO: What is Lyme disease?

Lyme disease is the most commonly reported vector-borne illness in the United States with approximately 300,000 cases reported each year. Typical symptoms appear within days or weeks after being bitten by an infected tick and may include fever, headache, chills, stiff neck, fatigue, mental fogginess, depression, swollen lymph nodes, muscle aches and joint pain. A telltale sign of Lyme disease is an expanding red rash anywhere on the body that may have a “bull’s eye” appearance. Most, but not all, infected individuals develop a rash and that rash may not be at the location of the bite. A similar illness, Southern tick-associated rash illness (STARI or Masters disease), is found in the South, but not as much is known about its cause or long-term effects. Symptoms occur within approximately seven days of infection and include fatigue, fever, headache as well as muscle and joint pains. A red “bull’s eye” rash may form on the skin at the location of the bite.

GDO: What other diseases do ticks carry?

Ehrlichiosis is an emerging tick-borne illness that is more common in the South, particularly in dogs. Symptoms commonly occur within five to 10 days and may include fever, headache, muscle ache, lethargy, confusion, nausea, and vomiting. Less than a third of infected adults develop a body rash. Tularemia is caused by bacteria transmitted by ticks and deer flies or by handling an infected animal’s carcass, such as when skinning a rabbit (common carriers of the disease) without gloves. Symptoms appear within three to five days and include chills, headache, muscle aches, vomiting, diarrhea, fever and swollen lymph nodes. Skin ulcers may also develop and occur in about 80 percent of cases. It is common for symptoms to disappear for one to three days and return for two to three weeks.

GDO: How can doctors treat these diseases?

Rocky Mountain spotted fever, Lyme disease, STARI, Ehrlichiosis, and Tularemia are treated with antibiotics. If treated early, recovery is usually quick. However, these illnesses are difficult to diagnose because of their non-specific symptoms, particularly when a rash is absent. If treatment is not received immediately, the infection can spread to other parts of the body and become difficult to treat. In these cases, life-long illness and sometimes death can occur.

Tick paralysis is one of few tick-borne conditions not caused by a pathogen. The illness is caused by a neurotoxin in a female tick’s saliva and is transmitted during attachment. Symptoms usually occur within two to seven days and include headaches, vomiting, fatigue, and loss of muscle function. Treatment requires removal of the tick, after which symptoms go away within hours to days. If untreated, it can lead to respiratory failure and death. Children in rural areas during the spring, especially those not checked around the neck, scalp, and body upon coming indoors, are at greatest risk of getting tick paralysis.

GDO: What is ‘red meat allergy’?

Alpha-gal allergy, also known as the “red meat allergy,” is an emerging illness. This allergy is induced in some people when the saliva of an attached lone star tick causes their immune systems to produce antibodies specific to alpha-gal, a carbohydrate found in red meat. When a person eats red meat, the meat triggers an allergic response within four to six hours of ingestion. Symptoms include upset stomach, diarrhea, hives, itching and anaphylaxis. A blood test confirms the condition and avoiding red meat is the only treatment.

GDO: What else should people who go outdoors keep in mind?

These are just a few of the tick-borne diseases that infect humans and pets. You should familiarize yourself with the symptoms of them all. Infected individuals may not develop all the symptoms listed and symptoms can vary greatly from person to person. Additionally, having more than one tick-borne illness at a time or co-infection, is possible. Pets are at risk of becoming infected with some of these illnesses. If your pet spends time outdoors, check it regularly for ticks and watch for signs of lethargy, arthritis, lameness, fever, fatigue, and change in appetite. See a doctor or veterinarian immediately if you or a loved one suspect infection.