What’s the most popular game fish? It’s the crappie, of course! And lots of them await your visit to the Delta.

The little bobber settled after my short cast. I had dropped the bait near the cypress roots close to the shoreline where the swamp birds were singing their songs. On this fine day, the sun was warm and a slight breeze from the south made a tiny ripple on the water. But there was one thing that kept this South Alabama morning from being perfect.

My bobber suddenly disappeared, my line came tight, and my long, slender rod bent with the weight and pull of a fish. A silvery flat side marked with dark spots rolled on the surface as I moved the fat crappie away from the roots and into my landing net.

Yep, now the day was perfect. I had found the place where the crappie were holding. And I had the bait they wanted. All I had left to do was collect a few more delicious crappie for supper and the day would be just about as good as days get.

The fact that all of this great action happened just a few miles from home here on the magnificent Mobile-Tensaw Delta made the fine day even better. 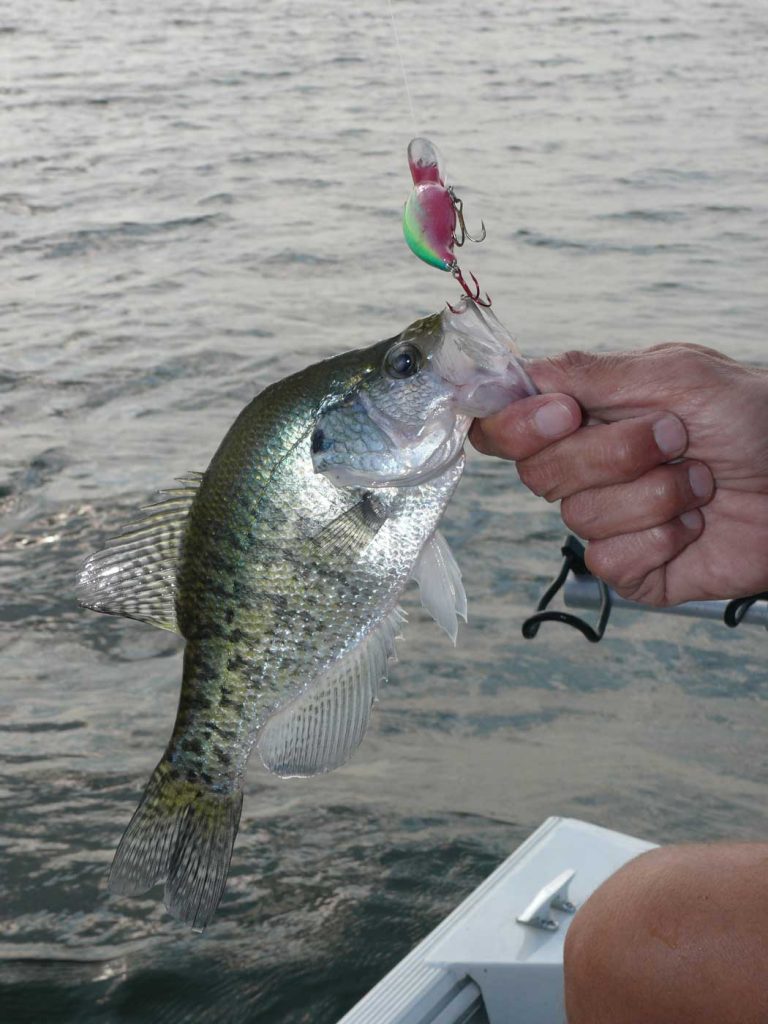 Crappie won’t turn down a small crankbait pulled slowly past their cover. Photo by Ed Mashburn

Where to Find Crappie on the Delta

The Mobile-Tensaw Delta is a very large place, and a novice angler will be overwhelmed when faced with the prospect of trying to find crappie in the miles and miles of water and trees that fill the Delta. There’s a lot of water to sift through to try and find good crappie fishing on our own.

We are in luck, though, because a couple of Alabama’s veteran anglers have offered to help us find and catch crappie by sharing their years of fishing in the bayous and creeks of the Delta. Robert Dobson of Foley and Ken Tyson of Bay Minette have spent a lot of days on the Delta chasing after crappie, and they share their knowledge with us.

“Crappie are in every tributary in the Delta—small streams and bayous which feed into the main rivers—and any side stream that has grass, stumps, or wood will probably have crappie.”

Robert Dobson, best known to his friends as “BT 66,” tells us that certain places on the Delta have plenty of structure—logs, stumps, blowdowns, limbs. Other places don’t.  This is crucial because crappie will very often orient to structure in the water.

Even after the crappie have spawned and moved somewhat away from the spawning areas, they want some sort of cover around.

Tyson agrees with Dobson. He tells us that crappie are in every tributary in the Delta—small streams and bayous which feed into the main rivers—and any side stream that has grass, stumps, or wood will probably have crappie.

To make our beginner’s search for crappie even easier, these two veterans give us some specific names and places to look for crappie.

This is structure fishing. There’s not much deep water. Dennis Lake is a lake where there’s no breakthrough. That means it’s narrow and somewhat deeper than broader creeks. There is lots of cover in Dennis Lake, and this is great for crappie.”

Ken Tyson says, “Bryar Lake and Mifflin Lake are good. Go in there and look for any structure.”

For crappie anglers from the Mobile side of the Delta, places like Gullison Creek, Catfish Creek, and Bayou Sarah are all very good for crappie fishing.

Spring is a Great Time for Delta Crappie

Ken Tyson says with conviction, “If weather conditions permit, you can catch crappie in the Delta year-round.”

Of course, most crappie anglers know that spring is the time that crappie are most easily located and caught because of their spawning habits, but we crappie fans don’t have to limit our fun to just the spring.

After the spawn has ended, anglers can still catch some very good crappie in the Delta. Spring presents anglers with the opportunity to explore a wide range of locations that will hold good numbers of crappie.

Another good thing about fishing for crappie is that the techniques that work on spawning slabs will work for postspawn fish, too.

“Look on the main rivers for post-spawn crappie,” says Robert Dobson. “There are several boathouses just south of Cliff’s Landing on the Tensaw River, and crappie fishing around these boathouses can be very good.”

Ken Tyson concurs. “After the spawn, they’ll be generally close to structure. Sometimes they will even be on the structure they spawned around, but they will not be as closely grouped. In late spring, instead of catching twenty or thirty crappie at a specific spot, you may only get three or four.”

When the Delta’s crappie have completed their family duties, they are still around, and we can still catch a bunch of them. We just have to keep looking and moving until we locate where the scattered group of slabs will be. 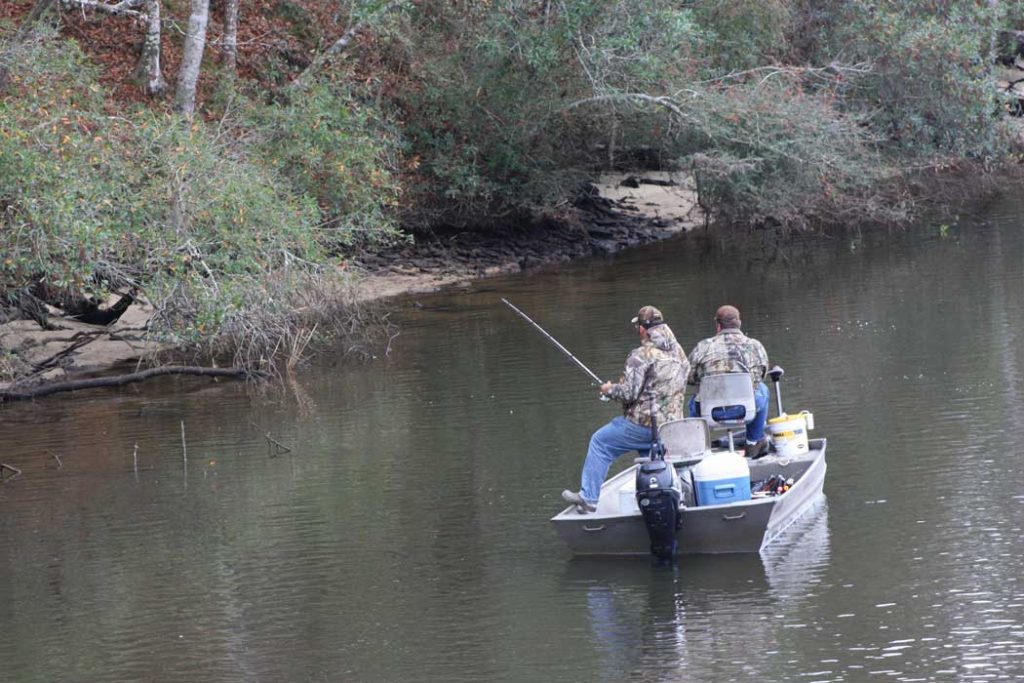 Finding a hot spot for crappie can be very rewarding. Photo by Ed Mashburn

How to Catch Delta Crappie

When it comes to rigging up for catching crappie, anglers have a wide range of choices.  All kinds of gear will work from high-end ultralight spinning gear to cane poles and big red and white bobbers.

In general, long and limber rods work better for crappie fishing since they allow anglers to dip and pick up bait in very tight quarters.

“I like a telescoping crappie pole,” Dobson says. “It’s a rod designed just for crappie fishing. Mine are from ten- to eighteen-feet long. Bass Pro makes a good crappie rod.  These come with little dinky reels. I guess you could call these crappie rods ‘educated cane poles,’ since they work the same way as old-time cane poles.”

“I go really light,” he adds. “My line is not heavier than eight to ten-pound test. I want to be able to break the line off when I get hung up in the structure, and if you’re fishing right, you will get hung up from time to time.”

Most crappie anglers on the Delta have learned that for consistent day-in and day-out results during spring, nothing beats a bucket of lively crappie minnows for collecting a cooler of big slab crappie for a fish fry.

However, sometimes bait and tackle shops just can’t get and keep enough crappie minnows for all of the anglers who want them.

“The obvious point: crappie anglers need to have a wide selection of sizes and colors in their jig tackle box.”

When using live minnows for crappie, anglers have to find the correct depth where the largest concentrations of crappie are holding.  The best way to do this is by fishing with a slip cork.

This slip-cork allows anglers to quickly and securely change the depth the live minnow stays at in the water.  This allows anglers to find out if the crappie are holding at two feet, or four feet or six feet. This kind of depth control is crucial for best live bait results on crappie.

Crappie jigs—small ¼ to 1/32 oz jigs in a rainbow of colors—have accounted for a lot of crappie through the years on Delta waters. Some days in late spring, the crappie don’t really care what color jig is put before them. They’ll eat everything. Other days, they want a red jig with just a flash of chartreuse on the tail.

The obvious point: crappie anglers need to have a wide selection of sizes and colors in their jig tackle box. Lots of spare jigs are needed, too, because like live bait fishing for crappie, if we’re fishing in the right places, we will hang up and lose a lot of jigs.

Robert Dobson suggests anglers try another lure technique for catching crappie. He says, “A tiny white crankbait (under 200 size) can be very effective on crappie. Fish it slowly. Throw it out near cover, and bring it back slowly. When it ‘loads up,’ keep reeling, because that is probably a crappie taking the bait. Crappie won’t smash the lure like a bass. They just swim up and take the plug.”

Dave Armstrong, Supervisor of the Freshwater Fisheries Division at Spanish Fort tells us that the high water earlier this year caused some short-term problems for anglers, but in the long term, it may be a benefit.

“The high water allowed crappie to spawn on mud flats where they can’t usually be,” Armstrong says. “When the water levels dropped, the crappie fry went back to the main river.”

When asked to describe the state of the crappie fishery in the Delta, he says, “Our crappie are in good shape. We don’t have the size and numbers like Miller’s Ferry, but we do have some fifteen- to eighteen-inch-long crappie caught every year.”

So, What Are We Waiting For?

Thanks to our buddies who have shared their knowledge and experience, we know how to fish for spring Delta slab crappie. And heck, we even know where to go to find great crappie fishing.

It only makes sense that we load up the boat, grab some long, limber poles and a bucket of minnows and a pocket-sized tackle box of jigs and head to the Delta. The crappie are just waiting for us to come visit and bring a few home for supper.