While the industry of deep sea fishing Orange Beach doesn’t enjoy a large coastline, the fishery both inshore and offshore is productive, and robust, largely due to extensive reef development. That artificial reef system has resulted in what many say is the best red snapper fishing in the region, if not the world.  That didn’t happen by accident or overnight.

Native Americans lived in what would become Orange Beach, Alabama for the abundant seafood and  especially oysters. The primary tribes were the Creeks, Alibamas, and Seminoles. These natives saw the earliest European explorers who largely passed by the area in their ships.

Early settlers faced some real hurdles when living in the Orange Beach region. Roads were practically non-existent, and supplies and gear had to come by water, if it arrived at all.

Large orange groves, for which the area was named, were planted by early settlers and were productive until the freeze of 1920.  Commercial shrimping and commercial farming have always been big industries in the Orange Beach area.  When the Intracoastal Waterway (ICW) was first developed in the region, it fostered a fledging fishing industry with some locals renting boats and serving as guides for charter fishing trips.

For a long time, Orange Beach was a pretty wild, unpopulated place.  No longer.

Step One – Access to the Gulf and Earliest Charter boats

When the ICW was built in 1936, Orange Beach residents had much easier access to Pensacola in the east and Mobile to the west.  However, access to the open Gulf waters and the fish that live there was very limited.

The first man-made pass was dug by hand and we’re talking shovels and buckets circa 1906. This first pass was located where the Flora-Bama Lounge now stands and because it was narrow, was quite difficult to navigate as tides and currents constantly shifted sandbars and made life hard for boaters.

Hurricanes have always been and continue to be major players in the development of Orange Beach. The hurricane of 1906 created a new, bigger pass to the west of the original hand-dug pass and created Alabama Point. The old pass was very narrow and dangerous with tide rips and bars, and it was  not usable by larger fishing boats.

With the opening of the new pass, though, captains and anglers could venture out into the Gulf a bit easier. It was still a challenging pass to navigate and captains had to be very cautious because of the changing bars and currents, but the storm-created pass showed great potential as access to the open Gulf. 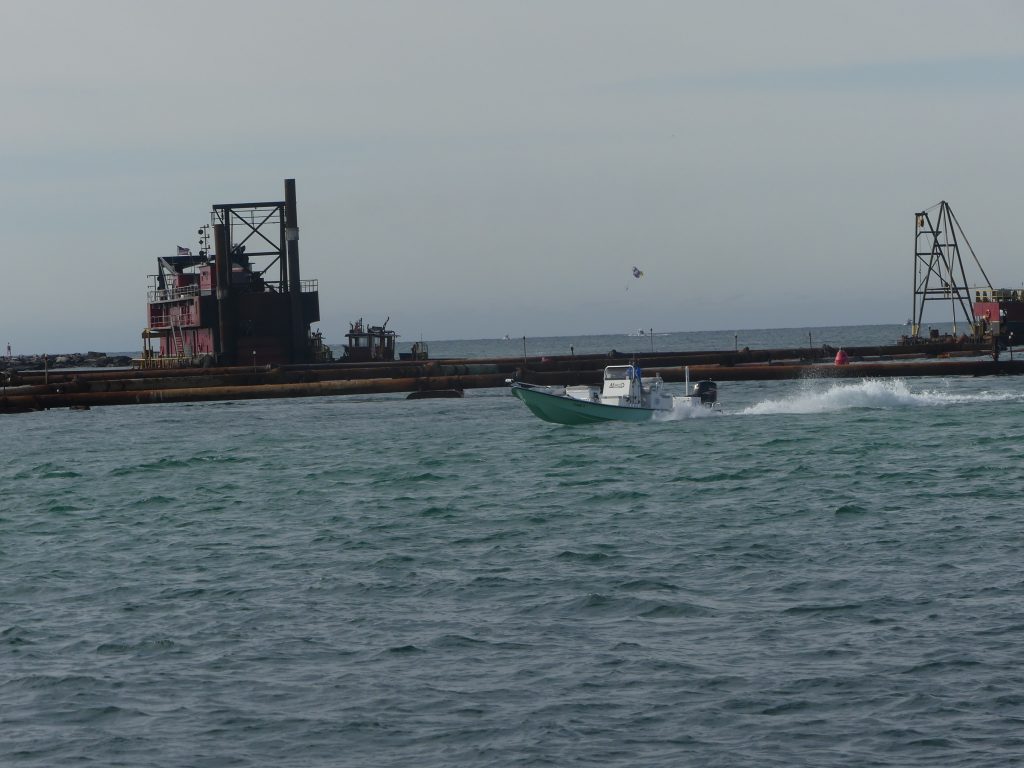 Even today the dredging of Perdido Pass is a constant chore

And the fishing boats in the early days of Orange Beach charter fishing?  Well, we’ve come a long way since then.

In 1913, Herman Callaway was the first Orange Beach charter boat captain.  He had a 24 foot long boat with a six horsepower engine. He could run at nine miles per hour.

In the early 1900s the first “fishing for hire” operations began in Orange Beach.  The Customs House in Mobile issued a “fishing for hire” license to the Callaway family.  Visitors to the Orange Beach area would arrive and then want to take fishing trips offshore, mainly trolling for redfish, cobia, and king mackerel.  Locals with suitable boats would take them fishing but it was nothing even close to the scale of today’s Orange Beach deep sea fishing operation. 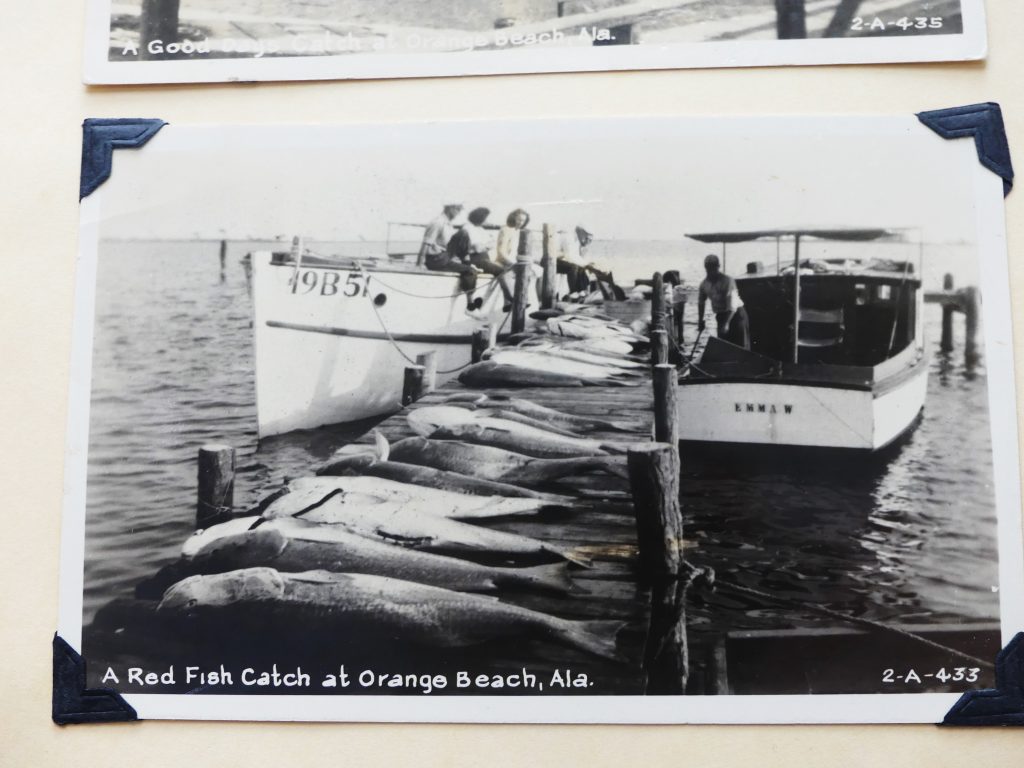 Orange Beach has always had good fishing, and this line-up of big bull reds proves it.

In 1962, the first bridge over Perdido Pass, a small two lane bridge, was built.  Sea walls and jetties were built along the sides of Perdido Pass during the 1960s to help stabilize the channel. Hurricane Frederick, we’ll hear more about this important occurrence, damaged the old bridge to the extent that a  new stronger, higher bridge was built in 1989.

Step Two – The Beginning of Reefs

Orange Beach anglers and captains have known for a long time that there are some great fishing in the Gulf, but getting to the fish was difficult, and the nature of the Alabama parts of the Gulf of Mexico bottom doesn’t fit the needs of many important reef fish.

Specifically, the natural bottom in the Orange Beach area doesn‘t have much solid bottom structure which occurs naturally. And if there’s no structure, there won’t be many reef fish, like red snapper.

So local Orange Beach captains decided to do something about this. 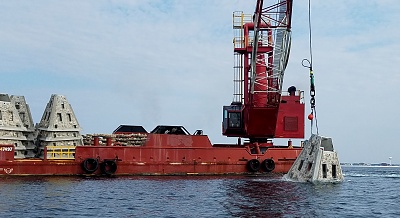 And the Rest is History.

It became immediately apparent that artificial reefs were effective magnets for important game fish, especially red snapper. After that first effort at reef creation, the Orange Beach area has seen lots of public and private reef structures sent to the bottom to attract red snapper and other popular game fish.  In 1974-75, more car bodies, culverts, bridge rubble, and barges were put on the bottom, along with ghost fleet Liberty ships, old World War II transport ships, were sunk. In 1987, offshore permitted areas for creation of artificial reefs whose combined permitted area is 1,260 square miles of bottom were allowed. In 1994, obsolete Army tanks were deployed on the bottom.

And of course, the offshore gas and oil drilling rigs have proven to be superb reef structures for reef fish including redfish and red snapper.

Of course, the path of Orange Beach’s deep sea fishing has not been easy. In particular, the coming of Hurricane Frederick in 1979 challenged all aspects of Orange Beach life.

After the wind stopped blowing  and the storm surge receded, Orange Beach residents came back and got started rebuilding, and how they did rebuild.

Roads to the Orange Beach areas were rebuilt and greatly improved. The first modern Orange Beach condo came in 1979 after Frederick.

A new and much larger and higher bridge over Perdido Pass came after Frederick damaged the old small bridge.

Although Frederick brought a great deal of destruction and death to the Orange Beach area, it also brought better roads, more access, more traffic, and many more people..

In fact, everything in Orange Beach might be described in time terms as “BF” or “AF” which stand for “Before Frederick” and “After Frederick”.

And for the Future

At present there is an ever increasing number of charter boats for deep sea fishing and more than 100 charter boats dock in the various marinas around the area of Orange Beach.

There is constant  public and private reef building activities going on, and all charter boats and crews spend much of the off-season building and deploying private reefs to attract more and more red snapper and other reef fish. 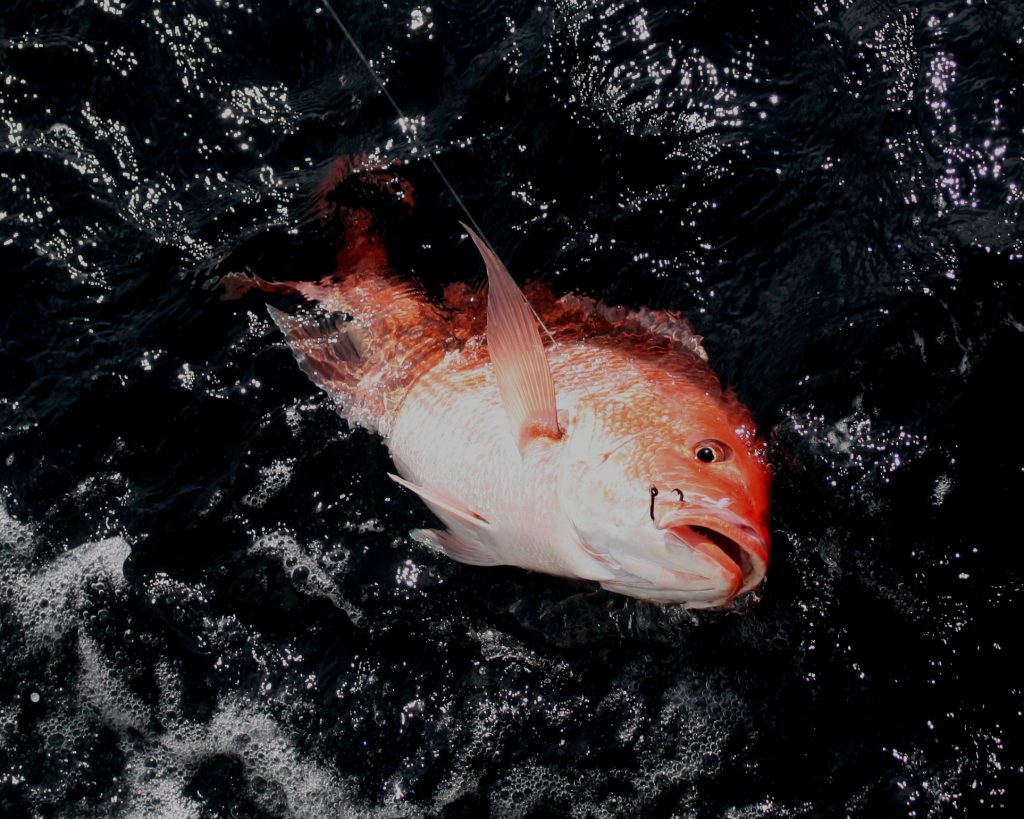 The star of Orange Beach deep sea fishing, the best red snapper fishing in the world

Looking forward, the state of Alabama has assumed more control and power over red snapper fishing regulations. Things such as season start and stop dates, days of the week open for red snapper fishing and closed days because of storm conditions which are much more realistic and accurate than federal regulations are coming in play. The continuing deployment of artificial reef structures by the state and private interests show that the red snapper population in particular has never been better . There are more and bigger red snapper now than ever before.