The debate seems simple: shallow or deep water bass fishing. Bass fishermen have long argued the issue with individual anglers adopting a shallow or deep philosophy and only grudgingly deviating from the approach.

Spring and fall are generally considered prime shallow-water periods with summer and winter the best times for a deep approach. However, those generalizations do not take into account the peculiarities of fish behavior nor the continued evolution of bass fishing.

The shallow/deep conundrum became most evident to me a few years ago. Some of the best anglers in the sport had gathered to promote both Lake Guntersville and the Bassmaster Classic held there in 2014. The largemouth were near the peak of the spawn with numerous fish in the 4- to 6-pound range locked on beds in the shallows. The timing and conditions – a full moon period in April with water temperatures in the high 60s – seemed perfect for shallow-water fishing.

“There’s always some fish deep. You can spend several hours trying to catch one fish or, if you find the right school out deep, you can catch 30 pounds in a few minutes.” — Casey Martin, bass pro

The pros caught a few of those spawners, but almost without exception, every angler with whom I shared a boat during the 3-day promotional event checked out fish in deeper water. They either scanned the deep ledges on their electronics looking for schools or positioned their boats in deep water to intercept fish moving to and from spawning areas.

“There’s always some fish deep,” said Casey Martin, a Guntersville guide and FLW tournament pro. “You have to weigh your odds. You can spend several hours trying to catch one fish or, if you find the right school out deep, you can catch 30 pounds in a few minutes. The deeper fish are generally more predictable.”

Those ideas translate to fishing success today, particularly in tournament situations. While the thought of fooling bedding fish is intriguing, that approach can also be frustrating because spawners are notoriously fickle and ignore even the best presentations. Even shallow fish in the fall can be difficult to catch, often because of the glut of baitfish available in a given area.

Given the proper electronics, an understanding of underwater topography and a little patience, fishermen continue to trend toward deep water bass fishing. For every Greg Hackney, a B.A.S.S. Elite Series pro known best for his shallow-water acumen, a dozen other pros find their money fish offshore in deep water. 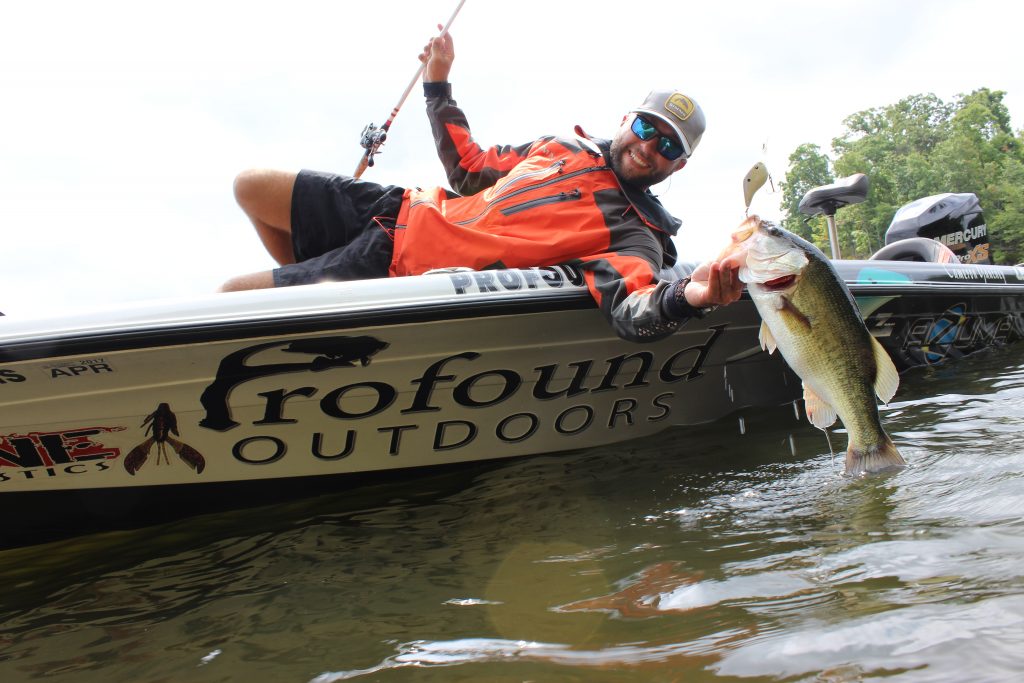 Tennessee angler Taylor Massingill, who calls Chickamauga his home lake, but fishes up and down the Tennessee River chain, opts for deep water bass fishing almost all year long. He only moves shallow in small, precise windows during the spring or fall, instead using his electronics expertise to pinpoint bass out deep.

“I usually go shallow later and move back deep earlier than other fishermen that I compete against,” said Massingill, who later added that he follows much the same routine in the fall.

Cameron Gautney, one of the hot sticks on Tennessee River lakes this year, follows a similar approach. He concedes the need to fish shallow at certain times of the year, but finds more tournament quality fish in deeper areas.

“I definitely can catch them deep year-round,” said Gautney, who led the Bass Fishing League ChooChoo Division points standings through late summer. “At certain times of the year you will find more numbers and better fish out there. Any time you can find groups of fish in deeper water, nine times out of 10, they are going to be pretty good-sized fish. When I say good-sized, I’m talking four pounds or better.”

Gautney cites the first BFL tournament on Lake Guntersville this year as an example. While Guntersville bass transition toward the shallows in February, Gautney found fish in deep water and milked a small school to finish in fifth place for that event.

“If I see a group of fish out deep, even one with four or five fish, I am going to fish it,” Gautney said. “In the first BFL on Guntersville, I located a school that I thought had six fish in it. I caught six fish and did well in the tournament.”

Just how deep is deep? The answer is relative. For Massingill, deep water bass fishing in the spring may be anywhere from eight to 15 feet. He fishes down to about 30 feet in the summer and winter.

Gautney said deep is also relative to the fishery. He probes down to about 35 feet on Tennessee River lakes, but notes that fish may hold even deeper on upland reservoirs like Smith Lake.

Both Massingill and Gautney are digital experts. Their understanding of electronics is an inherent part of their nature and fishing success. State-of-the-art electronics available today allow them to fish most efficiently.

“My strength is fishing deep,” Gautney said. “If I can see a fish on my electronics, I feel like I can catch it.”

“I enjoy seeing them,” Gautney said. “I enjoy using electronics and knowing the fish are there, being able to locate schools and being able to throw right on them. When you’re beating the banks or fishing grass, you have to cover just a whole lot of water before you encounter a school of fish. That’s one thing I enjoy about deep water bass fishing. You can find the fish and know that they are there.”

“It takes a little patience, but can prove much more effective than just randomly casting,” Massingill said. 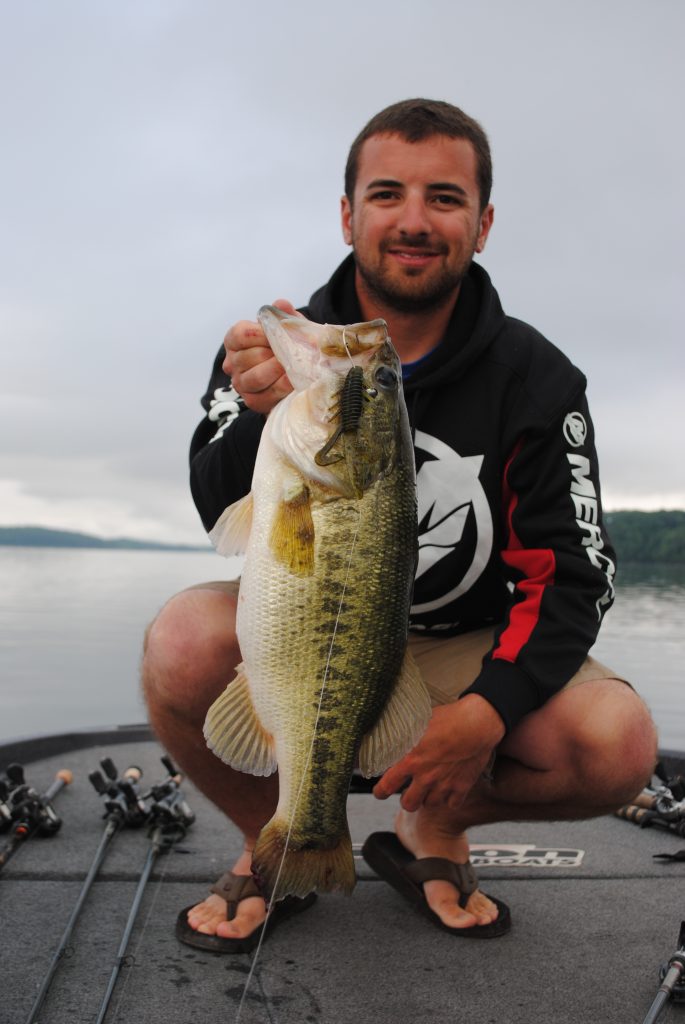 Gautney and Massingill have both employed traditional weapons for deep water bass fishing, such as crankbaits, swimbaits, Carolina rigs, Texas rigs, football jigs, big spoons and shaky heads. Both, however, continue to refine their approaches.

When the bite turned tough on Chickamauga this year, Massingill turned to a drop shot rig to trigger bites.

“We have not had a lot of current and the bite has been tough at times,” he said. “You pull up on a school of fish that should bite and catch nothing. That’s one reason I’ve thrown a drop shot with a finesse worm this year more than I ever have. Once you get a school fired up with the drop shot, you can then pick off a few more with the bigger moving baits.”

“Once you get a school fired up with the drop shot, you can then pick off a few more with the bigger moving baits.” — Taylor Massingill, bass pro

Gautney enjoyed great success with swimbaits in the past, but his deep fish this year have largely come on two presentations, a drop shot rig and Profound Outdoors deep-diving crankbaits.

“I’ve really gone away from the swimbait thing this year and gotten more into finesse fishing,” he said. “You do what you have to do to get bit and fishing the drop shot and sometimes with a shaky head have produced better, that and deep-cranking with the Z-Boss 20 and Z-Boss 25.”

Massingill said choosing the deep option is not a difficult choice for him.

“Fishing deep, I think you have your best chance of catching those 5- or 6-pounds that normally make up a winning tournament limit,” he said. “When you put together a limit of fish like that, it is a winner or always very close to it. That’s why you will almost always find me in deep water.”