Nothing makes these dogs happier than finding your deer.

One of the toughest decisions a deer hunter will ever face is when to call off the search for a deer he knows he hit but can’t find. If you’ve hunted much at all, you’ve probably suffered through the experience.

You see a deer, take the shot, and watch the deer crash off into the brush. You’re pretty sure you made a good shot. You wait 30 minutes or so to pursue the wounded deer, just like you’ve been taught to do. Finally, you climb down from your stand to go look for your deer.

You find a blood trail and you start tracking. You keep going until you just can’t believe there’s no deer, only a trail of blood that keeps on going. You wonder how anything could possibly keep moving after losing that much blood.

Eventually, the time comes when you decide to stop tracking the deer and let him lay overnight, then resume the search the next morning. Or, heaven forbid, call off the search for one reason or another.

Either way, that’s the kind of thing that can make a hunter lose many hours of sleep. “What if the deer goes off of our property? What if it rains and washes the blood trail away? What if coyotes find my deer and devour him overnight? What if someone else finds my deer and claims him?”

It’s hard to shut down your brain and go to sleep, especially if it was a good-sized buck. 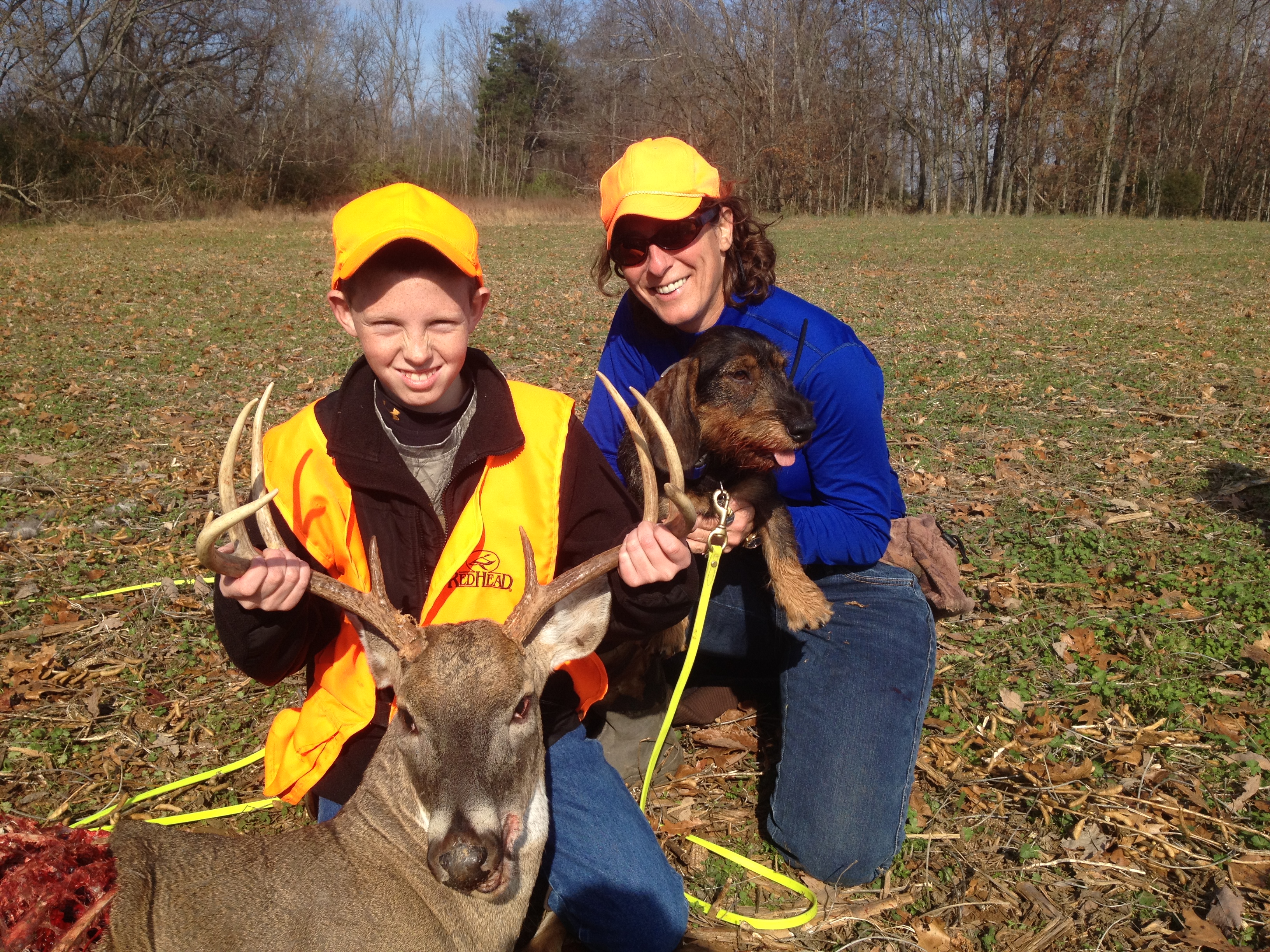 Imagine Lane Freeman’s joy when his 9-pointer was located. This photo was taken by Pete Young.

Call On The Deer Tracking Dogs Before Calling Off The Search

If you’re convinced the deer was fatally shot and you can’t find it, help is only a phone call away. Trackers have deer tracking dogs that live for this.

These tracking dogs want to find your deer as much as you do. Just give them a few minutes to sniff around and pick up the scent. A dog’s sense of smell is just about as good as that of a deer. In fact, good deer tracking dogs can get onto the scent of a wounded deer and find it with or without a blood trail.

That’s what Tom Munoz of Madison County, Alabama says about his dogs, Meg and Jack. Both are Wirehaired Dachshunds. Tom and his wife Jackie usually work as a team when called on a tracking expedition.

Tom says when they load up Meg and Jack in the truck and head off to a tracking job, the dogs go nuts as soon as they arrive at the site and see men dressed in camo. They know what’s about to happen.

When the dogs hit the ground, their noses go to work instantly. Once the scent is picked up, the dogs begin trailing off-leash and work their magic.

“If your deer is down, my dogs will find it!” Tom says.

The dogs are fitted with GPS tracking collars. After all, these dogs have been known to track a deer as far as five miles.

The Dog’s Bark Can Tell You Everything

Tom says he can tell a difference in the way the dogs sound, indicating whether they’ve found a dead deer, bayed a critically wounded deer, or bayed a deer that still has some fight left in him.

This can be especially helpful in getting a hunter into position to finish the deer off if it jumps up again.

Tom and Jackie cover a large portion of northern Alabama and southern Tennessee. Check out their website: http://www.alabamadeertracking.com for more great photos and success stories.

In the southern part of the state, a good source for deer tracking dogs is Roger Barnhill of Baldwin County. Roger has a single deer tracking dog, a female Southern Black Mouth Cur named Copper.

Even though Copper is fitted with a GPS tracking collar, Roger prefers to have her on a long leash, or 40-foot lead as he calls it, while she’s tracking. This method allows him to see what Copper sees and how she reacts to different findings, such as blood, hair, bone and other traces the deer may have left behind.

This has allowed Roger to become highly skilled in foretelling where the deer was hit. He can, with a great degree of accuracy, tell the hunter if his deer was gut-shot, shoulder-shot, lung-shot and so forth.

He once told a hunter, much to the hunter’s dismay, that his deer had been shot in one of the hind legs. Sure enough, when they found the deer, a hind leg had been shot and broken. This skill is extremely helpful in getting a hunter in position to finish off a wounded deer. 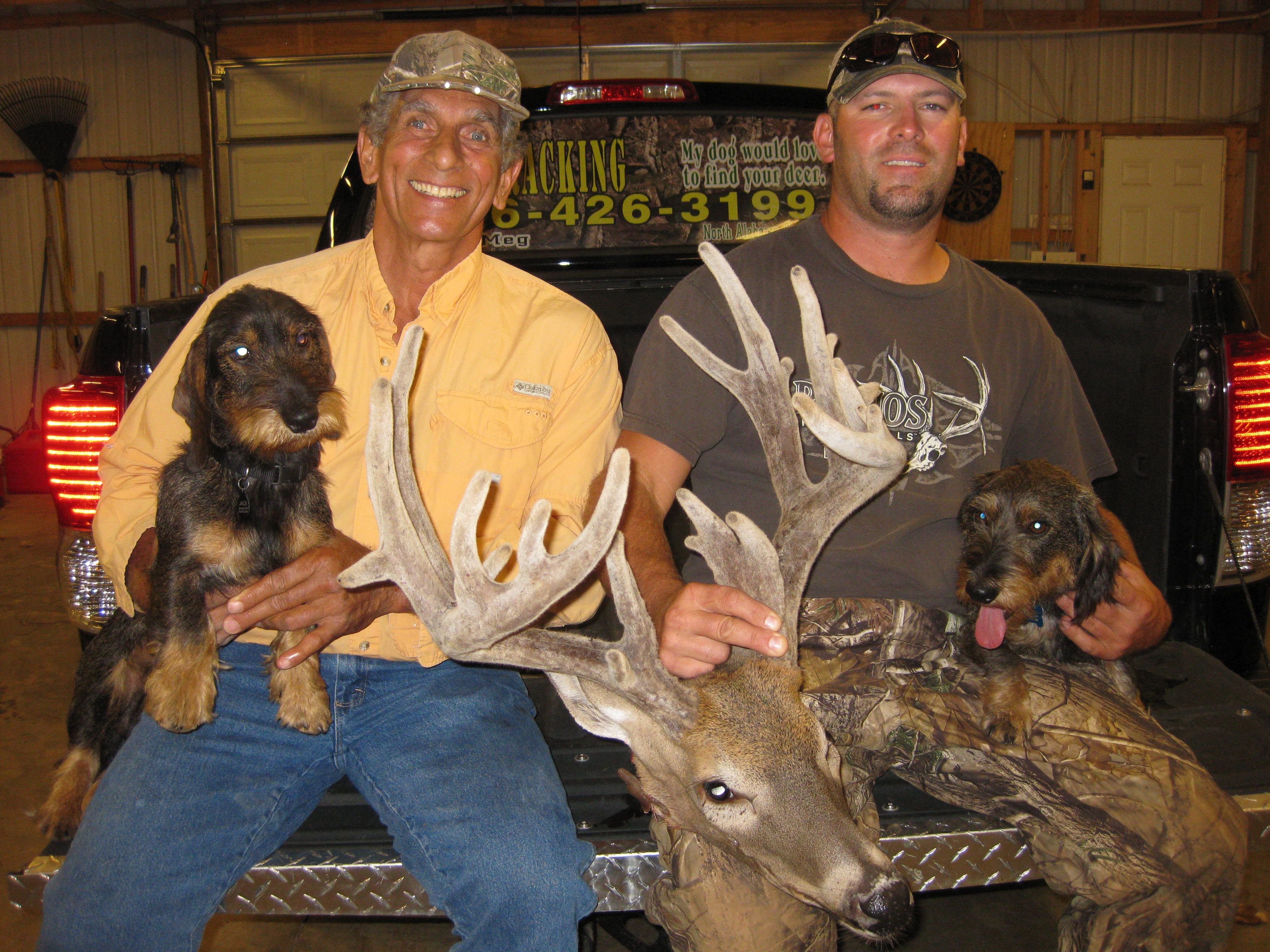 Recovering this trophy involved a “skunking” in the dog’s face. This photo was taken by Pete Young.

Trust The Dog’s Instincts More Than Your Own

Some things can be very frustrating to a tracker until he learns to totally trust the dog’s instincts over his own. One fault is second-guessing; you just know you’re supposed to continue in a certain direction but the dog insists on going the other way.

“Sometimes you just want to snatch the dog up and say ‘get back over here and do your job!’” Roger says.

But he has since learned that Copper’s way is always the right way. Another thing is that sometimes deer tracking dogs will just stop as if to say “I’m done; no more tracking,” and completely stop cooperating.

Roger has talked to other trackers about this issue and they all experience the same thing at times. They have concluded that the dog’s senses tell it the deer is not fatally wounded and will not be found.

Copper has an amazing 100-percent track record (pun intended) with gut-shot deer being recovered. Other deer, not seriously wounded, have slipped away after a long search only to be found later on game cameras, alive and well, to be hunted another day.

Though Tom and Roger have different dog breeds and different tracking methods, they both share a common sentiment; tracking has become an addiction, much more than hunting ever was. They both say it’s a hobby and not a profession. It’s more about a bond between dog and dog owner and the gratification that comes from helping a fellow hunter find his deer.

An organization dedicated to the art is called “United Blood Trackers.” For more information, you can visit their website at http://www.unitedbloodtrackers.org/

Pike, Barbour, Dale, Coffee, Bullock, and parts of Henry and