The sun began to color the sky above the eastern shore of Mobile Bay. Subtle shades of pink and orange colored the early morning darkness. The surface of the river feeding into Mobile Bay was smooth; not a ripple could be seen.

The anglers in the center-console fishing boat, who had arrived on the calm scene a few minutes earlier, made long casts and started the slow, irregular retrieve so typical of top-water lures being worked in early fall. It was a peaceful, almost sleepy scene. It marked early fall on the Alabama coast as another calm night changing naturally into another calm day.

All at once, the scene changed from calm to very energetic. Something big rolled up and took a plug. The water was shattered by powerful beats of a broad tail, and the quiet was pierced by the sound of a reel’s drag protesting as line was pulled off the reel by a strong fish. The angler had his hands full of fighting fish.

After a good fight, the angler’s buddy netted the big fish. This one just happened to be a 12-pound redfish. After admiring the copper-colored fish, the two friends were pleased to see the released red swim strongly and return to the waters of Mobile Bay.

This morning was a golden moment in a golden time of the year for fishing in Mobile Bay.

What Can We Catch in Early Fall?

It might be easier to ask, “What can we NOT catch in early Fall?”

In smaller waters, creeks, bayous and so on, the usual list of inshore choices will be ready to play. Some of the best speckled trout and redfish catching usually happens during this time. At this time, there are lots of feed sources inshore—shrimp, crabs, pogies, mullet—and the game fish are busy eating as much as they can to get ready for leaner times ahead when the weather and the water turns cold with winter.

Our buddy, veteran Mobile Bay angler Robert Dobson of Foley, Alabama, tells us that early fall is a high point of the entire fishing year.

“September to October is the start of good fall fishing in Mobile Bay IF we don’t get too much rain and freshwater coming down the rivers into the bay,” he says. “As the water starts cooling down, fishing should be very good. Both specks and reds are fished and caught in the same places and on the same lures and bait.”

Flounder can also be quite good. This year in particular has not been a very good flounder year for most inshore anglers due to a very cold spring. Plus, heavy upstream rains pushed a lot of freshwater through all rivers and streams feeding the bay. Our hope is that the water over the summer and into fall will regain its usual saltiness. This should make flounder fishing in Mobile Bay feeder streams much better in the early fall.

White trout should start to make a strong appearance on the inshore reefs and bars, and anglers can load up a boat with these good-tasting little cousins to the speck trout.

“Larger summertime game fish are still here out in the open bay and especially on Dixey Bar.”

Larger summertime game fish are still here out in the open bay and especially on Dixey Bar. King mackerel are still here, and these fall kings tend to be some of the largest fish of the entire season. They are feeding heavily to prepare for their fall migration south to warmer waters off the Florida Keys.

Also, a small fraternity of dedicated anglers spends time in various secret locations all over Mobile Bay looking for those huge and intense fighters, tarpon.

Mobile Bay has a good population of tarpon that arrive here every spring and leave every fall. Mobile Bay tarpon travel widely, and they tend not to stay in a certain place very long. Live mullet work well, but tarpon will also take live crabs drifted past them.

A fish that has been a traditional favorite of many Mobile Bay anglers in late summer and early fall is the tripletail. These funny-looking and hard-fighting fish are very common in Mobile Bay, and they can come in sizes approaching 30 pounds, but the most commonly found fish will weight from five to 10 pounds. Live shrimp are a standard bait for tripletails.

Where Should We go?

Inshore, both reds and specks (and the flounders which live in the Mobile Bay system) will be orienting toward the mouths and lower reaches of feeder creeks and rivers.  Robert Dobson says, “Fish River, Bon Secour River, Magnolia River can all be very good in the fall, and Big Mouth—that’s where Week’s Bay empties into Mobile Bay —can be very good.” All of these fine inshore rivers have good launch ramps for anglers, plus bait and tackle shops are not far away. 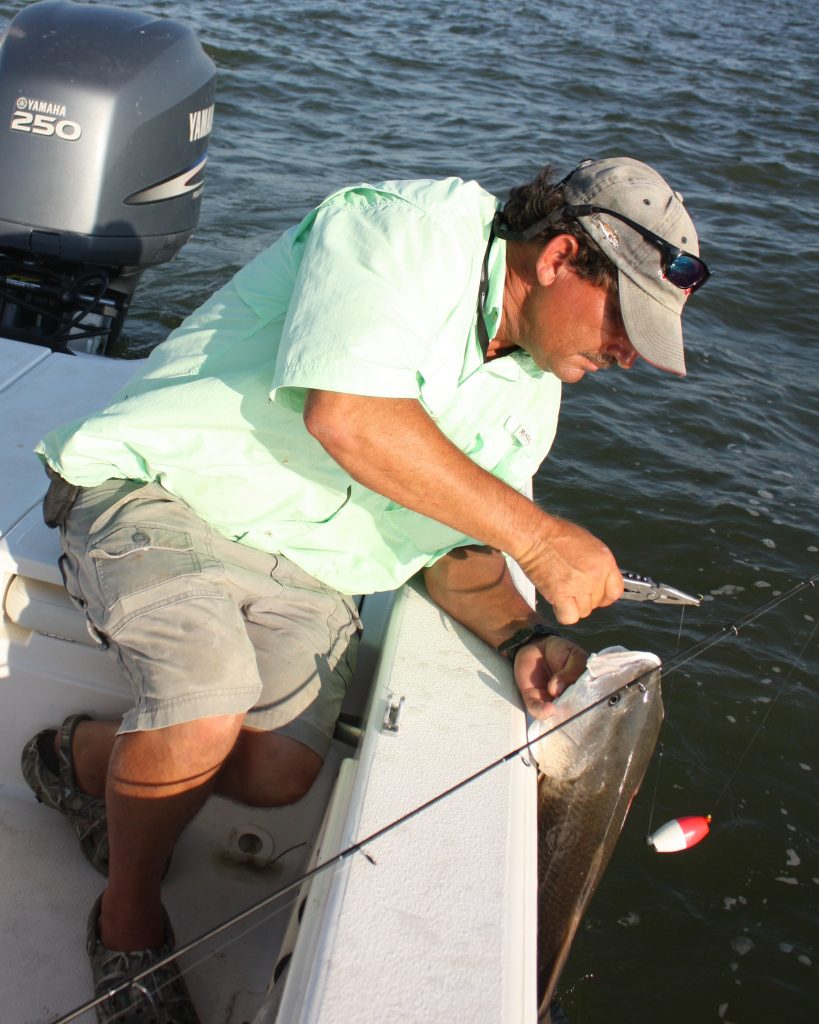 Big redfish can be found on oyster bars and other bottom features. Photo by Ed Mashburn

For the great big open water fish, we’ll need to look at the Gulf and the main body of Mobile Bay. Anglers can put in at Fort Morgan on the Eastern Shore or Billy Goat Hole on Dauphin Island for easy access to both the Bay and the near Gulf.

Tripletail are a real blast to find and catch, and they can be found just about anywhere in the Mobile Bay System where there is a floating object or solid structure in the water.  Look for these dark-colored fish to hang around navigation markers and crab trap floats.

Kings are generally found around open water structure such as gas rigs.

Fishing a live cigar minnow on a two-hook stinger rig just out in the Gulf past Dixey Bar will almost certainly produce some lightning-fast big fall kings. Fishing in Mobile Bay for kings around Sand Island Lighthouse can be very productive, too. Look for birds working over schools of feeding fish. Almost certainly, the feeding fish will be kings, big bull reds or Spanish mackerel.

Tarpon can be found almost anywhere in Mobile Bay, but a traditionally solid place to find kings is in the pocket of deeper water just out from the Grand Hotel at Point Clear.  Fish an outgoing tide, and have some big live mullet and live crabs for bait. Oh, yes, hold  on tight. When one of the silver kings takes a bait, some stressful action will be arriving very soon.

When fishing inshore waters of Mobile Bay, an angler can never go wrong with live shrimp. Everything eats live shrimp, and most bait and tackle shops have good supplies of shrimp in the fall. Just about the only problem with using live shrimp is the clouds of pinfish and other bait stealers will whittle down a live shrimp in just a few seconds. The specks and reds we’re after may never get a chance to see our offerings.

We can always use artificial lures. Robert Dobson says, “I’m partial to GULP scented lures. I put a GULP on a ¼ oz jighead. I prefer the natural color, but many folks like the new penny color.”

A jig fished over inshore reefs (oyster bars are very good places to find reds and specks) is almost always a sure bet to catch fish. Work the jig along the bottom with a small jerk now and then. Don’t overwork the jig. Make it look like a shrimp that has been chased from its hiding place and is looking for shelter.

”Top-water fishing in Mobile Bay is also starting to get good in the fall,” Dobson adds. “I walk the dog with a bone-colored Zara Spook, but just about any kind of top-water plug will work.”

Anglers who make it to a good oyster bar reef or other solid structure just at sunrise can have some great results fishing in Mobile Bay top-waters.  Work the plug slowly and let the fish have plenty of time to see and take the lure. Redfish, in particular, have a hard time sometimes getting a solid strike on a top-water, so let them have a second or even third try at the lure before it is brought back to the boat.

For most of the big open water gamesters in Mobile Bay, it’s hard to beat an eight-inch-long live mullet for bait. For kings, use a two-hook rig and let the mullet swim around in the vicinity of a near-shore gas rig or just out from the pass of Mobile Bay.

Don’t be in a hurry to set the hook when a big king takes the mullet. Most of the time, the fish will hook itself on the strike.

For tarpon, a single big circle hook pinned through both lips of the mullet is a good idea.  Let the mullet swim freely. Look for rolling tarpon to help you find a good potential spot for tarpon fishing. When a fish takes the mullet (about half the time the big fish taking the bait will be a shark), let the fish run and then just engage the drag and let the circle hook do its work.

Since the circle hook will be rigged on a heavy monofilament leader, if it’s a shark that is hooked, most of the time it will bite free and that is that. However, if it’s a tarpon, some very interesting things will start to happen very quickly.

For those big old tripletails, the best technique is to cruise around looking for floating objects or solid channel markers. When a shadow is seen in the water near the object, toss out a live shrimp and let the shrimp sink. If the shadow is a tripletail, the shrimp won’t last long, and a very intense battle will begin shortly.

And of Course, There’s Always…

I hate to even say it—tropical storms. Early Fall is prime season for those nasty big ol’ weather systems with names like Camille, Ivan, and Katrina. If a tropical storm comes in to visit, all bets for fishing—and just about everything else—are off.

A tropical system that comes ashore on the Alabama Coast can bring very heavy rains which can affect the inshore fishing in Mobile Bay for weeks and even months afterward.

With any luck, we’ll all be lucky this year and avoid any tropical storm activity. Early fall fishing in Mobile Bay is too good to miss because of bad weather.