Are you frustrated with the lack of deer sightings just after the season begins? Here are some early season deer hunting tips for Alabama. Is this you? You have observed deer all through the summer months. Bucks and does have ventured out along field edges and pastures. You have patterned the deer in early mornings and late afternoons around cutovers and forest openings. You have seen them often and know they are around your hunting area.

In early October you make another scouting trip near your favorite stand site. Using binoculars and spotting scope, you scan the field edges where bucks once roamed. You see nothing. After a couple of more trips at different times, still no bucks. A doe or two may wander by in the distance. The deer seem to have vanished.

Many deer hunters across the state of Alabama run into this scenario just before deer season opens. One might think the deer have been tipped off and are lying low. The deer are still around, only their movement patterns have changed with the change in seasons. 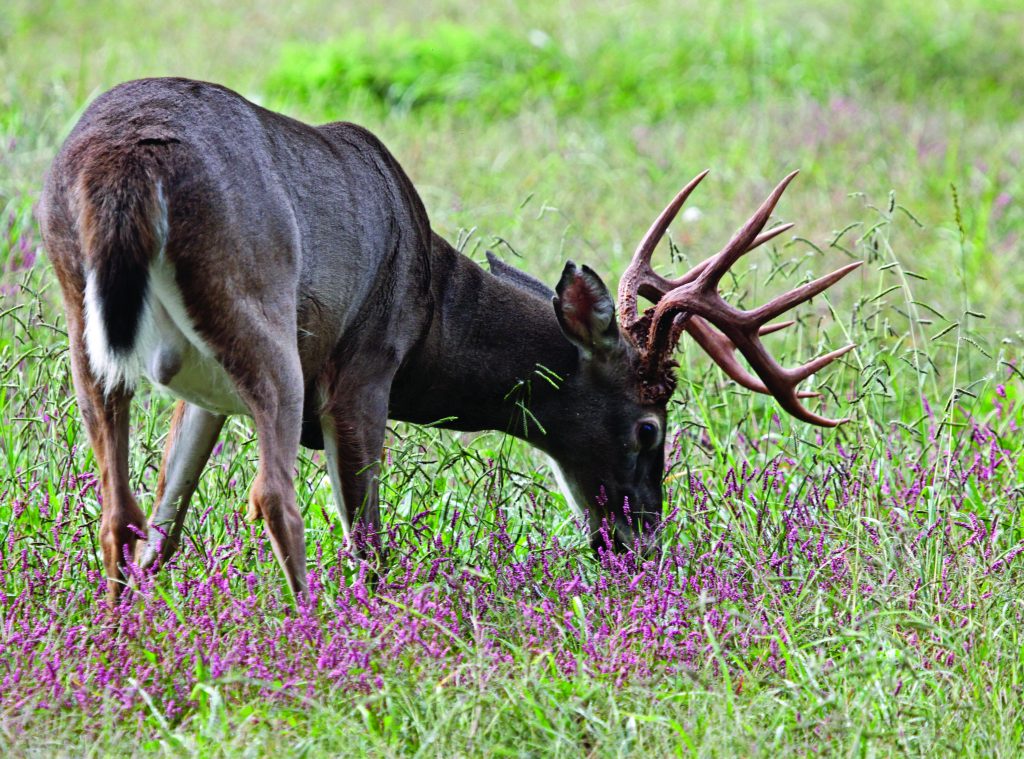 Deer will move with the food sources. Photo by Charles Johnson

Several factors can cause a shift in deer movement after September, especially with bucks. One factor is the change in food sources. During the summer months, deer have easy access to numerous corn, soybean and hay fields. These areas not only supplied adequate food but also cover.

In early to mid-September, farmers have harvested their corn crop. The dryer weather that is associated with early fall has reduced the growth of hay and other field grasses. Also, acorns begin to drop in some areas. The deer have shifted with the food source.

“Sometimes the changes in food can have the deer move,” mentions Eddie Salter of Evergreen, Ala. “I like to have my game cameras out during this time to catch that movement.”

A weather change can also affect the shift in deer movement. Deer know the conditions are changing and they are making a move to their fall/winter home range. As the fields are already bare and the leaves begin to drop, deer will move into thicker cover. The deer will find their hiding spot as long as food and water are nearby.

“Our data suggests about 50 percent of the deer in a given range will shift to the opposite end of their range during the fall and winters months,

Biologists believe deer have a spring/summer home range and then shift to the opposite end of their range for the fall/winter. Some deer research has suggested there is little overlap in range shifting. The deer biologists think the season shift in deer habits occurs about the time a buck sheds his velvet.

“Our data suggests about 50 percent of the deer in a given range will shift to the opposite end of their range during the fall and winters months,” comments Bradley Cohen of the University of Georgia Deer Research Center in Athens, Ga.”

The deer range can be from a few hundred acres to over a thousand acres. If you are hunting a large tract of land, the shift is not a big deal. However, if you are on a smaller tract, the deer on your property could range across the line to another property. Also, the deer on the other property can range over to your side.

Researchers at UGA are using GPS collars on deer to monitor shifts in movement patterns associated with seasonal changes. Also, the group is gathering information on how hunting pressure can also affect a change in deer movement.

The next early season deer hunting tips for Alabama lies in the biology of the deer. As the days grow shorter, the amount of light reaching the deer begins to trigger a biological response. Less daylight triggers the buck’s testosterone level and causes it to rise. Some bucks are in bachelor groups and will begin with some playful sparring. This is what we call the beginning of the rut.

The bucks are ready and able to breed. However, does have not yet come into estrus. Bucks will begin to move around and change their patterns. Some good news from deer studies indicates bucks range less as they get older.

“When a deer’s horns get hard, their whole complex changes,” Salter explains. “As the weather changes, especially after that first frost, they change their habits.”

As the seasonal changes progress, bucks will leave their bachelor groups and begin to range more over a wider area. Telemetry studies on deer have seen bucks range over a couple of miles. A buck you see today may be more than a mile away from the next. 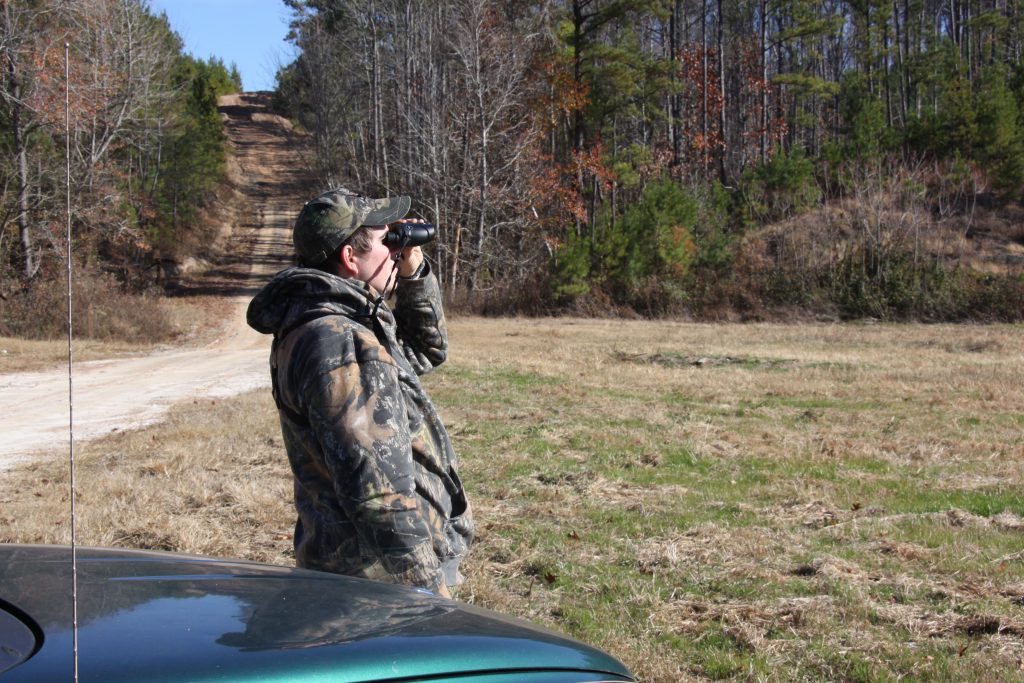 Use binocs or spotting scope for long-distance viewing. Photo was taken by Charles Johnson

During the spring and late summer, deer have very little contact with humans. A farmer gathers hay or checks his crops periodically. Deer don’t seem to care. Maybe they don’t feel as if they are being pursued. Even hunters watching from several hundred yards away don’t pose a threat to the deer.

Prior to the start of deer season, hunters begin to venture closer. They start planting food plots and setting up tree stands. Many hunters begin scouting and setting out game cameras. Now the deer are seeing real encroachment as humans draw closer to their area.

“Sometimes that little bit of pressure on deer can change the pattern,” advises Salter.

Another early season deer hunting tips for Alabama hunters can capitalize on is minimizing their impact on the deer world by keeping their scent down as much as possible. You should wear gloves and rubber boots when setting up trail cameras. Scouters should treat the area just like they were going to hunt it. They should keep noise, scent, and appearance to a minimum.

Salter says the deer are still around; they have just changed their pattern. If the deer you have been seeing in the summer has vanished, why not look around? They most likely have moved to a new food source. What’s the top food source for fall hunting? You know the answer is all those nutritious acorns.

“Dry fall weather will have deer moving close to a water source.”

With agricultural fields harvested, deer will move closer to an available food source. White oaks, red oaks, and other acorn-producing trees are among their favorites. Hunters may want to scout ridgetops and old forest roads for fall nuts.

“Hunters should scout during the midday hours to avoid spooking the deer,” explains Cohen. “The deer should be bedded down and are less likely to be up and moving.”

Early season deer hunting tips for Alabama is hunters should scout the area for water holes. Dry fall weather will have deer moving close to a water source. Hunters should check for trails leading to and from large creeks, ponds or rivers. Also, if the daytime temperatures are warm, these areas will provide some amount of shade and relief.

If it seems the deer you have been watching through the summer has disappeared, don’t panic. They are probably close by and only their movement patterns have changed. You can grab an aerial photo or satellite map and begin checking off the locations where deer will most likely hang out.

Hunters can piece together the various factors that affect deer movement and solve the range puzzle before opening day.