Long famous for its world-class fishing, Lake Weiss is great for fall fishing for crappie

Even though the calendar says it’s fall, the early morning temperature and the high humidity still say that summer heat has a grasp on anglers here on Lake Weiss in northeast Alabama.

But the days are starting to grow shorter, and the days are not nearly as oppressive as they were a couple of moths ago, so this must be fall.

The lake is quiet. Most skiers and jet-ski jockeys have left the lake for school or work after summer break, and the only folks venturing out on this calm, gorgeous morning are anglers, serious anglers looking for the prime ingredient of a wonderful fish fry.

But before we can clean and prepare those crappie fillets for frying up right, we have to catch them.

Captain Lee Pitts guides on Lake Weiss year-round, and it’s hard for the crappie to escape his knowledge and skills for very long. As we slowly work down a ledge along the mouth of Little River where it empties into Lake Weiss, Captain Lee keeps a sharp eye on his fish finder.

“Get ready any second now,” he says. And then both his rod and my rod bounce down toward the surface. It only takes a few seconds to get our fat crappies to the boat and into the live well. He smiles and says, “I believe we’re going to do alright today.” And that is surely a good sign for the day’s fishing.

Here’s how Captain Lee shoots his jig under a dock. Photo by Ed Mashburn.

As we slowly follow the curves and bend of the ledge below us, Captain Lee talks about the early fall fishing for crappie. It seems that, at least in the early part of autumn, crappie don’t all follow the same set of rules and the same roadmaps.

Captain Lee says, “Each day is different. You still have to work the fish this time of year.  It’s not just drop down and catch one right after the other, but the key to the puzzle is watching your bait and the fish as they move up and down on the ledge. This is where your electronics come in. I have learned to rely on my Humminbird electronics. When I see a black screen, it isn’t lying. It’s time for me to try somewhere else and search for bait and fish.”

“No matter what part of the month we’re fishing, the name of the game is finding the shad.”

As the month winds on, the weather tends to get cooler and more “fall like” so anglers generally find that the crappie tend to gather up in schools in deeper water. It’s their nature to chase shad and feed up for winter.

No matter what part of the month we’re fishing, the name of the game is finding the shad; the fish will be right there with them.

Where to Find These Early Fall Crappie

It doesn’t matter whether it’s spring, summer, fall or winter, the most important part of catching crappie is finding crappie.

Early fall fishing for crappie may take a good bit of searching and screen-watching to locate the best concentrations of good fish.

Captain Lee says, “I like to start out deep on ledges with a vertical approach. Around midday, I love to start hitting the docks. This is where the hunt begins. Fish move daily in and out of docks. I take into account several elements. Sunlight, wind direction, and the current all play major parts when I’m looking for crappie in October.”

During early fall fishing for crappie, we have crappie starting to wad up, hold on deeper structure, and feed up for the upcoming winter. As the month progresses and the water temperatures start to drop, the crappie will school up even more closely. 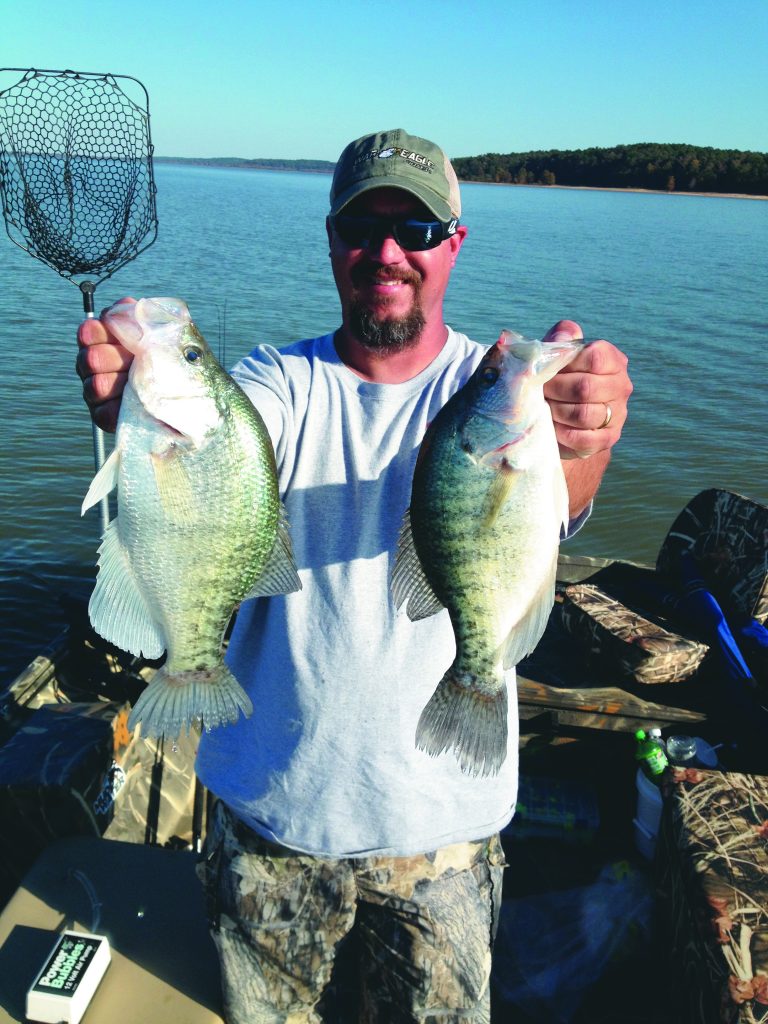 So, you want to catch a few crappie? Come to Lake Weiss in October. Photo by Ed Mashburn

More Than One Way to Skin a …Crappie

Many anglers assume that crappie will all be pretty close to the same areas at the same times. During the spring and summer, this is mostly true.

However, when the days start to shorten and the temperatures start to drop, crappie don’t all follow the same set of guidelines. They can be found and caught in different places.

When fall fishing for crappie, one reliable fall pattern on Weiss Lake is deep water fishing.

“For the deep water vertical technique, I use live bait,” Captain Lee says. “These fish don’t want to chase. They want the bait to sit right in their faces.”

Finding these deeper water crappie almost always involves finding some kind of deep ledge or stump line structure. The crappie may hold very close to the structure—almost touching it sometimes—or they may be a few feet off the structure. This is where good electronics come in handy. Once the crappie are located and their preferred holding position in relation to the cover (close or away) is identified, a live minnow dropped down to just above the fish will almost always bring results.

This simple yet effective technique consists of tossing a small jig as far under docks as possible and into the deepest shadows. Let the little jig slowly sink and then retrieve it very slowly. Many of the best “shooters” use a bow-and-arrow casting technique that looks kind of dangerous, but with a little practice is absolutely deadly on dock-holding crappie.

Captain Lee says, “For dock shooting, I prefer the Bobby Garland Baby Shad and the Slab Slay’r jigs. I use many colors since a fish’s preference seems to change daily. Some of my favorites are black and chartreuse and Monkey Milk.”

As we continue down the ledge looking for crappie on the screen, Captain Lee chuckles and says, “It’s crazy, but the two techniques contradict each other. Most of your crappie migrate out to creek channels and ledges, and this where I will use a vertical technique with live bait.

“However, many docks here at Weiss with three to six feet of water hold some giant crappie. This is where the fall dock shooting is deadly. When I use the Bobby Garland jigs, the fish tend to be very aggressive.”

One way or Another, Look for Wood

If there is an October pattern for crappie on Weiss, whether deep water or shallow structure, it would be to find and work wood.

As the water level on Lake Weiss is lowered to winter pool levels, more and more wooden structure becomes exposed. This means anglers can follow old creek channels with long-gone tree stumps that are much more obvious than during summer pool levels.  Crappie anglers can slowly work along these stump lines and will probably soon find good collections of crappie.

The wooden underwater structures of the many docks on Lake Weiss will be more exposed. This helps concentrate the crappie in smaller areas for easier catching.

“One of the biggest things I look for is wood cover,” Captain Lee says. “This time of year, crappie really bunch up on all kinds of wood, whether it be deep brush piles or stumps of shallow boat docks.”

Whether the crappie are found on deep wood or under shallow docks, the one thing that is always consistent is how good those crappie taste when they’re fried up with a bunch of French fries and onion rings for supper. And there’s nothing better than having a fish fry and watching football games on television.

That’s October at its best in Alabama.