Fishing for Catfish on Wheeler Lake

The water underneath the power lines hold larger catfish—here’s why.

We were idling out from the Mallard Creek Recreation Area boat ramp enroute to an area near the Brown’s Ferry Nuclear Plant cooling water intakes—less than two miles from the launch ramp. We had met last August at a Ken Freeman Big Cat Quest tournament at Joe Wheeler State Park.

Upon learning that my catfishing experience was limited, Brian Barton had invited me to fish with him anywhere in the Shoals area. So here we were. Three days earlier, he and his son Andrew had boated 13 fish weighing over 80 pounds in an afternoon. Having fished the area for over 30 years, Barton is a respected catfish and striper guide. 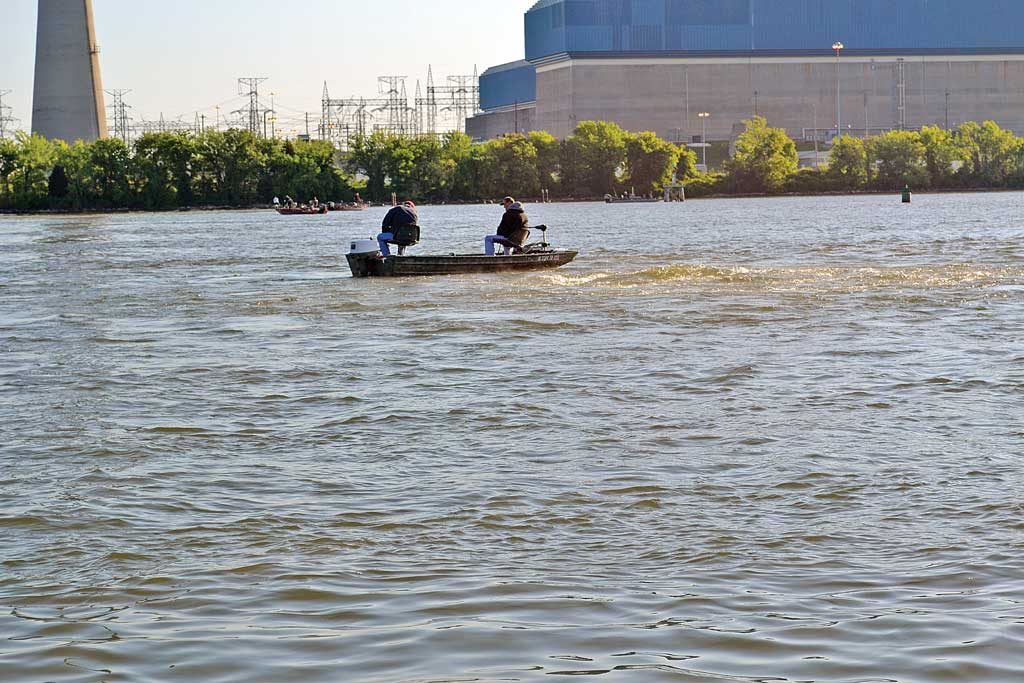 Our first stop was to fish along a steel-and-concrete wall that serves as intake for the power plant. Air temperature was approaching sixty, water temperature was mid-sixties, and the depth at the wall was about 25 feet. Within five minutes, a six-pound blue nailed my cut skipjack-baited hook and was soon boated. We released him back into the river quickly (as we did all of the fish we caught). We used a “controlled drift” or slow-troll technique throughout the day.

Next, we moved about 200 yards to the power plant discharge pipeline. Valves in this pipe allow the power plant operator to discharge water, thus creating a bubbling action in the river. While motoring slowly by six other boats to get to a place on the pipeline where the depth varied drastically, we talked about Barton’s “catfishing credentials.”

Brian and his Dad fished extensively for years. When it came time for college at UNA, he earned his tuition by running trotlines and selling about a hundred pounds a day, and by catching and selling skipjack to other anglers. The degree earned should have included at least a minor in catfishing.

After getting only two bites in this area, we moved a short distance and fished underneath a power line. According to Barton, the river bottom contains a lot of structure left when the power line was constructed. It can be seen easily on his Humminbird 1198 fish finder.

For large fish, Barton likes a 7′ rod with medium action. He still has a variety of reels and rods, but is now using the newly-introduced and super-sensitive catfish rods from B’n’M Poles, a well-known Mississippi company.
He is also a firm believer in Vicious line, an Alabama company product. We were using Daiichi Light Circle Bleeding Bait Catfish hooks, reputed to be the sharpest hook on the market. They are distributed by TruTurn, another Alabama company. Barton has recently converted to using High Visibility yellow braid in 80-pound test for the main line. 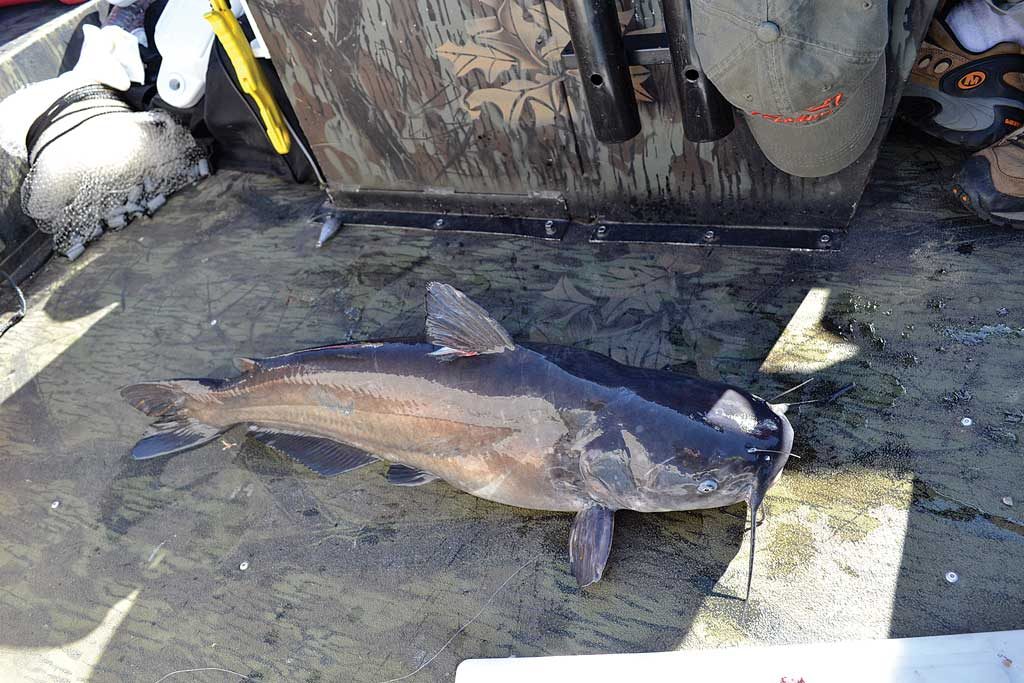 “You can often see a bite before you feel it,” says Barton. He uses 20-pound test mono on the weight, and 40-pound fluorocarbon on the hook. Barton starts with a snap swivel attached to the braid. To this he attaches a three-way swivel. The 3-0 hook is on an eight-inch leader, and the weight is on a two-foot leader. Use as light a weight as possible to keep the bait near the bottom.

“Alabama is fortunate to have quality companies such as these within or near our borders,” Barton says. When targeting smaller fish, he switches to traditional bass casting rods, spooled with 17-pound line. He has found circle hooks improve the hookup rate. “Let the fish hook itself,” Barton advises. “Then just lift the rod tip and land him.”

When asked what a guide typically does when he has clients, Barton replies, “I will pick you up at the motel or meet you for breakfast, and then head for the river. I provide water and a light lunch, and everything needed for fishing. If you want to keep fish, each angler can keep 10 fish less than five pounds, but you will need to bring a cooler for them. I will dress them.”

The angler should bring fishing license and clothing. Barton also says he will educate the anglers, so they can return on their own and successfully fish the area without a guide. He guides on Wheeler, Wilson, and Pickwick.

If we were targeting bedding cats, you would look for shallow banks and fish under the willows along the shore.

As to bait, Barton will either catch skipjack or shad the day before, or at the beginning of a trip. Skipjack are caught at the base of a dam on a multi-hook setup called a Sabiki rig. Shad are typically caught with a cast net. All bait is then put on ice. Alternative baits include cut bream and night crawlers, though the night crawlers tend to attract smaller catfish as well as other species. Shrimp are excellent. Every living creature, I believe, likes shrimp.

Catfish began bedding in May and will be on the beds in June. The water will be at 70 degrees in May and rising to over 80 degrees by the end of June. If we were targeting bedding cats, you would look for shallow banks and fish under the willows along the shore. Also, try a slip-cork at about three feet fished around boulders.

When fishing shallow, minimize boat noise and shadows that will disturb the fish. Every angler knows that all fish don’t spawn at the same time. Fishing deeper water at the power plant input (always a slow-moving current) where the power plant discharge pipe extends well into the river can be productive. It has several places where the water “boils up” to the surface. The adjacent power line can be equally productive.

The water underneath the power lines contains lots of structure and terrain changes and will often produce larger fish. All these areas are within a ten-minute ride from the Mallard Creek launch ramp.
Creek mouths and points, both deep and shallow, should produce this time of year. A bluebird day with clear water and no current usually means slow fishing. For deeper fishing, troll lines near bottom at .2 to .5mph.

During our eight hours of fishing, we boated ten nice ones—both blue and channel cats—weighing between four and ten pounds each. This was on a bright day with no current. Considerable time was also spent showing me the river and typical places to fish. It was a good day.

One word of caution; some of the wider portions of the lake can get choppy on windy days. There are numerous launch ramps and campgrounds on Wheeler. Get a lake map. It will be invaluable, particularly if you don’t have a fish finder with good internal electronics. For the lake newcomer, ask bait dealers and any commercial fishermen you see for advice. They can help.
For those that want to see what size catfish Wheeler has to offer, plan to attend the Ken Freeman Big Cat Quest Tournament held each August out of Joe Wheeler State Park. Cats in the 50- to 100-pound range are common. The pros will share when, where, and how with you.