The little feeder creek was slowly emptying its water into the larger bayou as the afternoon falling tide pulled water out of the Mobile Bay marsh.

Although I didn’t see any birds working or reds pushing water, I felt confident that I was in a good spot to have some great fishing action. I made a cast to the mouth of the feeder creek and let my jig tipped with plastic sink to the bottom. It didn’t sink long. The water was only four feet deep, but I could feel the sharp contact as my jig bumped into oyster shells on the bottom of the creek mouth.

“Catching flounder in the fall on the Alabama Gulf Coast is a tradition among anglers who want some fast action and some superb dining later.”

After a couple of short hops with a quick rod tip jerk, I felt what at first seemed to be the annoying tip-tip-tap of a pinfish attacking my jig. However, pinfish doesn’t usually mess with artificial lures, so this little bite might mean something else. Something a whole lot better than pinfish had found my offering.

I let the jig and grub sit still. When I tightened the line, I felt a solid pressure. A hang up? I don’t think so! With a sharp strike, I set the hook. Sure enough, I felt a movement from the bottom and then a good pull as something that I had hooked didn’t want to come see me. I could feel the familiar slow, but strong pulls, which told me I had found what I had come to find.

I made sure I had my landing net close by. When I worked the strong fish to the surface by the boat, I quickly slipped the net under the now wildly pulling flounder. That’s right. Old black on top and white on the bottom had come to the boat. Since this flounder weighed a good three pounds or better, it was going to come home with me for supper.

Catching flounder in the fall on the Alabama Gulf Coast is a tradition among anglers who want some fast action and some superb dining later. 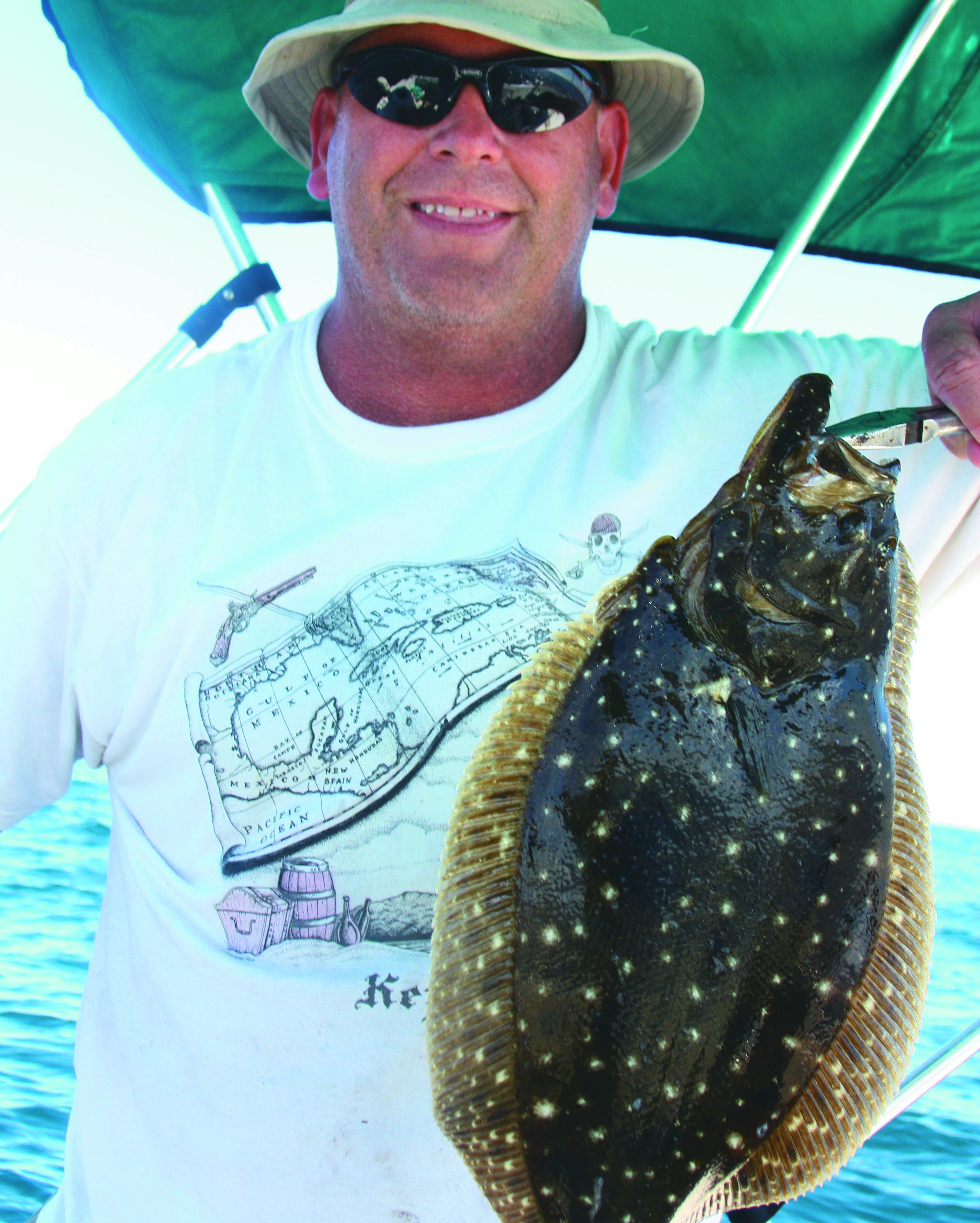 Here’s a classic arrangement, a nice flounder that could not resist a jig and soft-plastic grub bumped along the bottom. This photo was taken by Ed Mashburn.

Why are They Moving?

It seems that in fall, like many other kinds of inshore fish, Alabama flounder migrate from one habitat to another. In fact, there are two different species of flounder found here, but we’re going to look at them as the same fish. These funny-looking flat fish have spent the summer feeding heavily up in the shallower waters of the Mobile Bay system, but when the water temperatures reach 60 degrees, flounder head south to the gulf and deeper, warmer waters for the winter.

Flounder don’t make this move in one big dramatic relocation. Instead, they slowly drop farther and farther south through the channels leading to the open water of Mobile Bay and into the Gulf of Mexico. As the flounder move south, they feed heavily on a wide range of prey fish and shrimp.

Although each year is different and it is impossible to predict the exact day this migration will take place, November is traditionally the most common time for the flounder to head for the gulf. For anglers who know where to find them and how to fish them during this migration allows for some great fall fishing for flounder fishing.

How to Catch Them

Capt. Andrew Carter spends a whole lot of time taking clients fishing on the waters of the Mobile Bay system and he offers us his thoughts on this magical fall flounder fishing. He says, “As the water cools, the flounder start to move. They’ll move from bays into passes and then into the gulf. As they move, we catch them on sandbars, drop-offs, and ledges. Once they reach the open waters of Mobile Bay, they’ll gather up around gas rigs. When they reach the passes, flounder will be found around the jetties. No matter what kind of structure you fish, it’s best to fish the down current side of the structure. That’s where the flounder will be holding out of the main current.”

In general, by the end of November, most flounder will be out of the bays and creeks and they’ll be offshore in the Gulf until the water starts to warm again in the next spring.

“No matter what kind of structure you fish, it’s best to fish the down current side of the structure. That’s where the flounder will be holding out of the main current.”

When it comes to successful flounder fishing, Captain Andrew has some very solid advice. He tells us, “I would have to say using bull minnows is the best way to go. Bull minnows for flounder are like kryptonite for Superman. They just can’t resist it. A Berkley Gulp! curly tail grub on a 1/2-ounce jig in chartreuse or white works very well, too.”

The key, of course, for successful flounder fishing – whether using live bait or artificial lures – is to get the offering right down on the bottom. In slow water movement situations, use a lightweight, either a jighead or a Carolina rig slip sinker. However, if the current is really ripping as it does quite often in the passes and over open water Mobile Bay structure, add enough weight to get the bait on the bottom. If the bait is not on the bottom, not many flounder will be caught. It’s that simple.

Captain Andrew has some good advice when it comes to rigging up right for flounder fishing. He says, “I like a good, sensitive 7-foot rod and braided line. Remember, a flounder bite is often quite light, not a solid ‘thump.’ Braid works like a telegraph wire to transmit the soft flounder bite. If the water is dingy, I may tie the hook or jig directly to the braid with no leader at all. The fewer knots and connections, the better the feel for strikes.”

Most Mobile Bay area bait and tackle shops will have bull minnows for sale, but anglers can usually find good numbers of bull minnows in shallow water where the bait can be netted the evening before a trip. Bull minnows are very tough and they’ll usually live overnight in bait buckets just fine.

The most important element of successful fall flounder fishing is good structure on the bottom where there is current. Captain Andrew says, “You want moving water. The fish will be there using the current to bring them food so they can ambush it.”

As a bit final advice for someone who has successful flounder fishing, Captain Andrew reminds us that flounder are notorious for hanging on to a bait right up to the boat or shore and then letting go to make a clean escape. Because flounder mouths don’t work the same way as other fish mouths, getting a good hook set can be tough. Also, flounder go a little bit crazy when they are brought close in. They flop, fight and twist to escape at the last moment. A good landing net is an absolutely required equipment for serious flounder anglers. Trying to land an angry flounder by hand is a difficult task. There’s no good place to grab a flounder and trying to lip-land a flounder is an action most anglers only try once. Those flounder teeth are fierce. So, best get a good landing net. 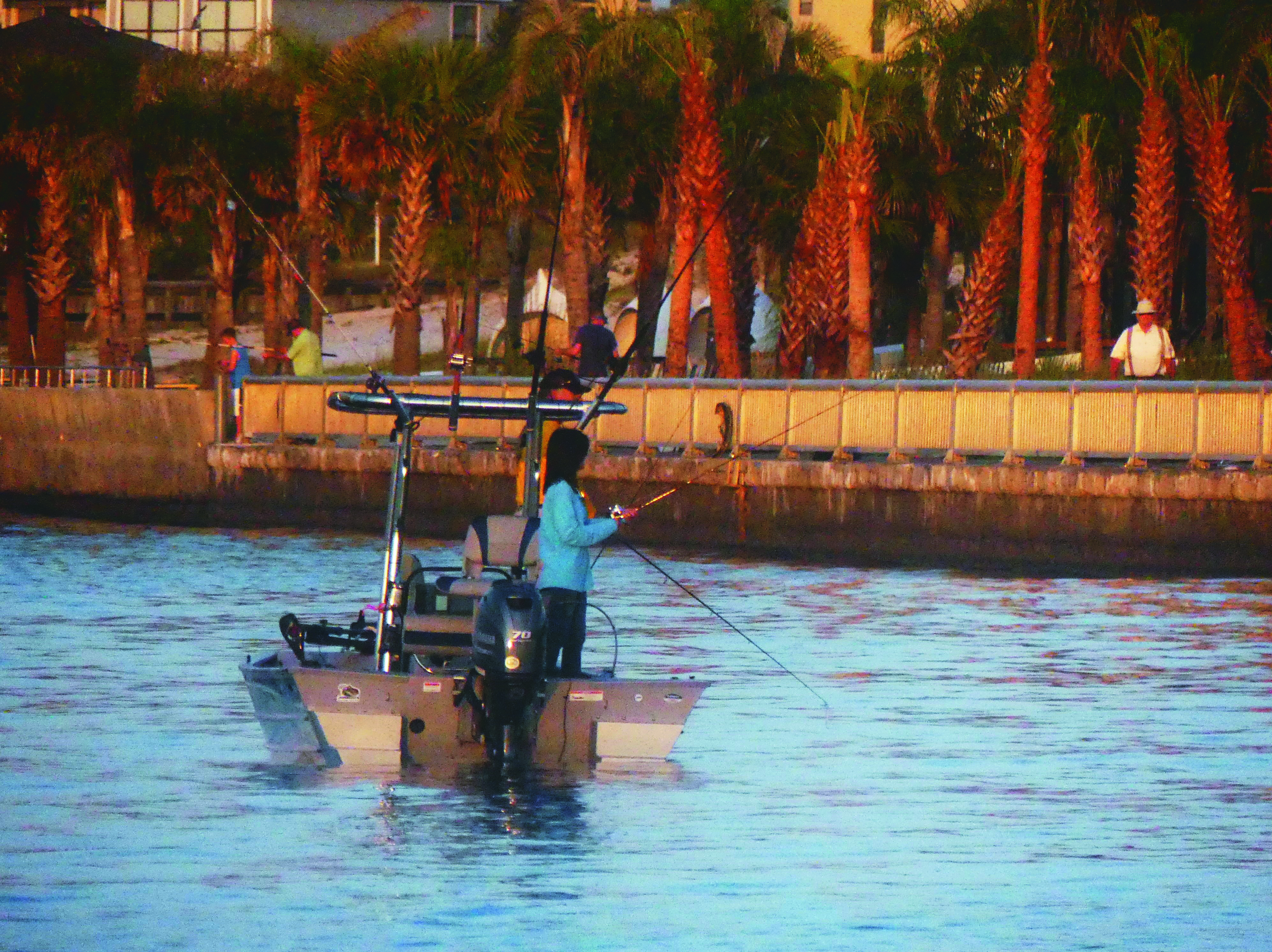 Working the seawall at Perdido Pass can pay off with good flounder catches. This photo was taken by Ed Mashburn.

Although fishing from a boat for flounder is probably the best way to catch a big mess of flatfish, it’s not the only way. Shore anglers can do quite well at times.

Fishing the jetties and newly reopened seawall areas of Perdido Pass can produce some fine flounder catches for fall anglers. Just try to keep the lure or bait in contact with the bottom and let the current move the bait to the fish holding on the sandy areas. Don’t be surprised when redfish or mangrove snapper take the offering intended for flounder. They’re in the same water doing the same thing as the flounder. Also, expect to lose some tackle to the rocky bottom here. If you’re not getting hung up, you’re not flounder fishing right.

The seawall of the Causeway is a traditional location for anglers on foot to catch some very good flounder in the fall. Anglers can park their car, drop a bull minnow or jig into the water close by the seawall and slowly walk up and down the seawall keeping the lure or bait in contact with the bottom as they stroll. Flounder love to hold just off the seawall to ambush prey as the outgoing tides pull water and food from the delta down to the open waters of the bay.

Another good spot for shore anglers to find successful fall flounder fishing is the Theodore Industrial Canal area. Shore-bound flounder catchers can have very good luck at the TIC when tides are going out. Most of the Theodore Industrial Canal area has a good ledge that drops off into the deeper water quickly. Flounder love to take up position on this drop-off to feed as minnows and shrimp are moved by the tide from shallows into deeper water.

For boat-equipped flounder chasers, Captain Andrew says, “Sand Island in the upper Mobile River in Pinto Pass is a good place. There are good shell banks and drop-offs that hold flounder. There’s always good water movement and there’s always bait there, too. The flounder will hang up on the ledges, so work your jig up and down the ledges for good results.”