Gigging flounder is a Gulf Coast tradition, and modern giggers have advantages that the old-timers would find amazing.

When we talk about gigging flounder on Mobile Bay, we’re talking about tradition.  Going out at night to find and stick a good mess of those delicious flatfish is about as simple as fishing can get.

It takes a light of some kind and a sharp gig. That’s about it.

Today, giggers have a lot of advantages that the old-timers would have loved. Propane lanterns are easier to use and keep out of the water than old gasoline-fueled lanterns.  Portable generators and super-bright lights mounted on shallow-draft boats make the night water look like it’s in bright sunlight.

Giggers today have some wonderful tools to work with, but it still comes down to going out after dark and getting into position for a secure thrust into an alert flounder. We may have more and better tools for gigging today, but we still face the same challenges as the old-timers did.

Of course, the reason we go out at night on the dark water is to obtain some of the best-eating seafood to be found on the Gulf Coast (or in the whole world).

Captain Yano Serra of Coden, Alabama, has spent many nights on and in the waters of western Mobile Bay and the surrounding bayous looking for flounder.

So, between the two of these great guides, we have the area pretty much covered. These experienced guides were kind enough to offer us some good ideas for gigging flounder effectively.

When we go flounder gigging, we can go by foot or by boat. We can sometimes do both in a single trip.

Wade-Gigging—About as Basic as Fishing Gets

Gigging flounder from a boat and gigging while wading have lots of similarities.  Actually, they are the same basic operation. Perhaps the biggest difference is that boat giggers can work all kinds of bottom while waders need to try to stick to firmer, non-muddy bottom. Of course, waders need to keep an eye out for stingrays as they work silently along.

However, for night-in night-out results, more flounder have been taken by wading giggers than by almost any other form of fishing. Wading puts us in close contact with the hard-to-see flounder of Mobile Bay.

Many wade giggers still use propane or other gas-powered lanterns, but some really effective underwater single-bulb lights have been developed that operate on small battery packs carried by the gigger.

These long-handled lights allow giggers to put the beam of light right on a suspected flounder for a quick stick.

A hand-held light allows giggers to safely and securely wade through shallow waters where most flounder spend their time looking for minnows, shrimp, and other food.

Captain Yano says that when he wade-gigs, instead of a multi-prong gig such as he uses on a boat, he prefers a single-prong gig. This makes removal of a stuck flounder much easier.

Wading allows giggers to silently work very shallow water that no boat could reach. This puts a lot of flounder within reach of a wader that a boat gigger just can’t access.

Another really big benefit of wade-gigging is that it allows giggers to find that wonderful seafood delicacy—soft-shell crabs—as they look for flounder.

Captain Yano says, “I always have a little scoop net with me when I go wade-gigging. When I see a crab, I scoop him up. If he’s a hard-shell, he goes back. If it’s a soft-shell, it goes in a sack I have with me. We used to pick up lots of soft-shell crabs in a single night’s gigging. This is easier to do when wading than from a boat.”

It’s hard to imagine better eating from a single fishing trip than flounder and a mess of soft-shell crabs.

Of course, there’s no reason that a gigger can’t do both kinds of gigging in a single trip.  It’s very likely that flounder on many nights will be in water too shallow even for a flounder boat’s shallow draft, so it’s a simple matter to anchor the boat in navigable water and then wade around islands and other structure that often hold nighttime flounder for gigging. 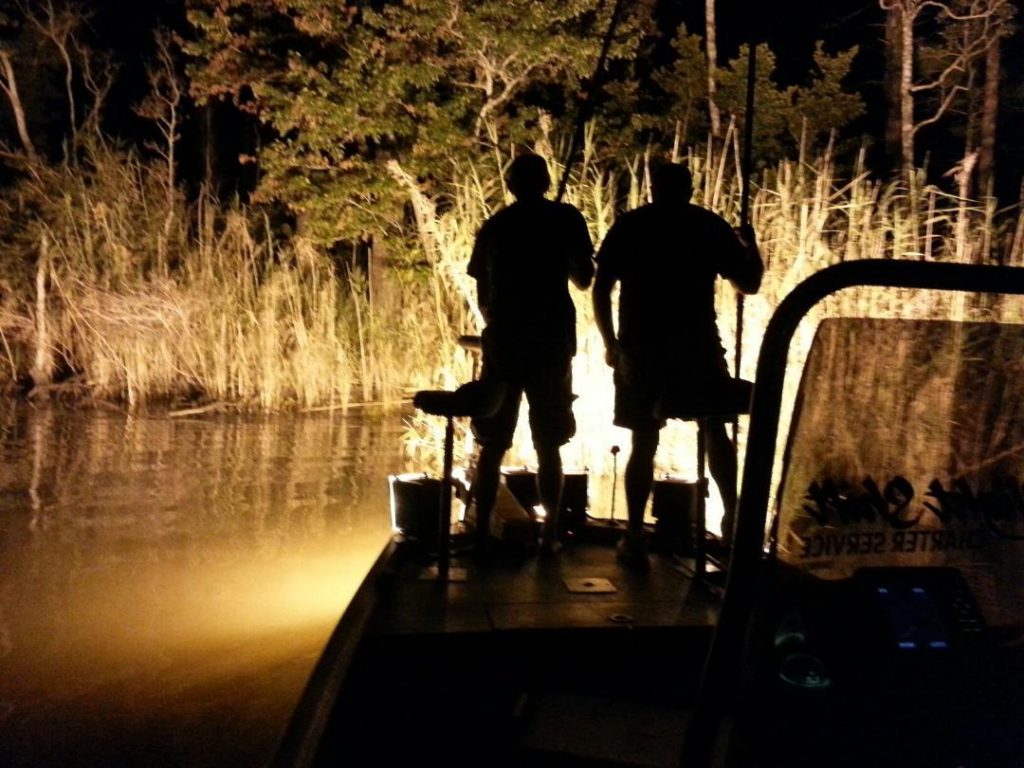 Flounder gigging boats need to be as shallow draft as possible because gigging is a shallow-water game.

“For years, I used a 14-foot aluminum flat-bottomed boat,” Captain Yano says. “It worked, but two people couldn’t gig from the front of the small boat. An 18-foot boat is better. You need a boat with length and width to support the people. You can pole the boat or use a trolling motor as you move down the shoreline.”

Captain Yano adds, “Now, I have a total gigging setup with a larger mud-boat with ten LED lights mounted on a handrail. Each light produces 950 lumens of lights, and it all runs off a battery. You can also use a generator to power a gigging boat’s lights.”

Captain Ron Stone adds, “Most people use a four-pronged gighead that you can get from any local bait and tackle shop. These gigheads are fine for a half-dozen trips, but they soon get bent and dull. I use a titanium gighead custom-made by Jim Cosson of Defuniak Springs, Florida, which has extra-large barbs to better hold gigged flounder.”

When asked what sort of tide he prefers for gigging, Yano says, “A neap tide is best; there’s no tide movement to scatter the bait, but really the tide is not as important as it is when fishing for flounder with a rod and reel.

“All you have to do when gigging is see the fish. The water needs to be clear.”

All you have to do when gigging is see the fish. The water needs to be clear. The bottom here on Mobile Bay is mud—a south wind will muddy the water. You’ve got to know the little places where there will be clearer water. In Florida, you’ve got sand bottom and you can gig in four feet of water. Here, thanks to runoff from farmland into creeks upstream, two feet is the maximum you can see in the bay.

Captain Ron Stone says, “The biggest mistake giggers make is that they find an area that looks like it SHOULD hold fish, but doesn’t, and they stay in the same area too long.  Flounder will move a lot, and they won’t always be in the same place.”

How to Spot the Flatfish and Stick It

Before we can stick ‘em, we have to see ‘em. This sounds easy but the whole structure and appearance of a flounder is designed to make it very hard to see. Flounder have first-rate camouflage, and when lying motionless on the bottom it’s a challenge to pick one out from the surrounding bottom.

When a flounder is spotted and then stuck with the gig, it might seem that the hard part is over. It’s not that simple. Many flounder have been lost to giggers because they slipped off the gig when the gig was lifted from the water.

Captain Yano says, “Stick him, then turn his head toward the stern, slide him across the bottom, and then slide him into the boat. Keep him moving on the gig. Don’t stop the gig until the flounder is in the boat. Flounder will jump when the gig is removed. I have a wooden wedge attached to an ice chest so I can just pull the gig out and the flounder will fall into the ice chest. Don’t just leave the flounder on the deck. They’ll be muddy and bloody and slick, and if someone steps on the flounder, you could kill yourself in a fall.”

How to Make the Stick Work—Where to Aim

When it comes to the moment of truth, there is a definite technique to maximize the chances of a successful thrust. “Try to stick him them right behind the gill plate,” Captain Yano says. “Try to get a head shot. That way you don’t mess up the meat. I was trained to hit them in the head, and that’s how I do it.”

Captain Yano has taken flounder from the waters around Mobile Bay for many years, and he’s learned a lot about the sticking game. He offers some good advice for those of us who are just getting started in the gigging game. 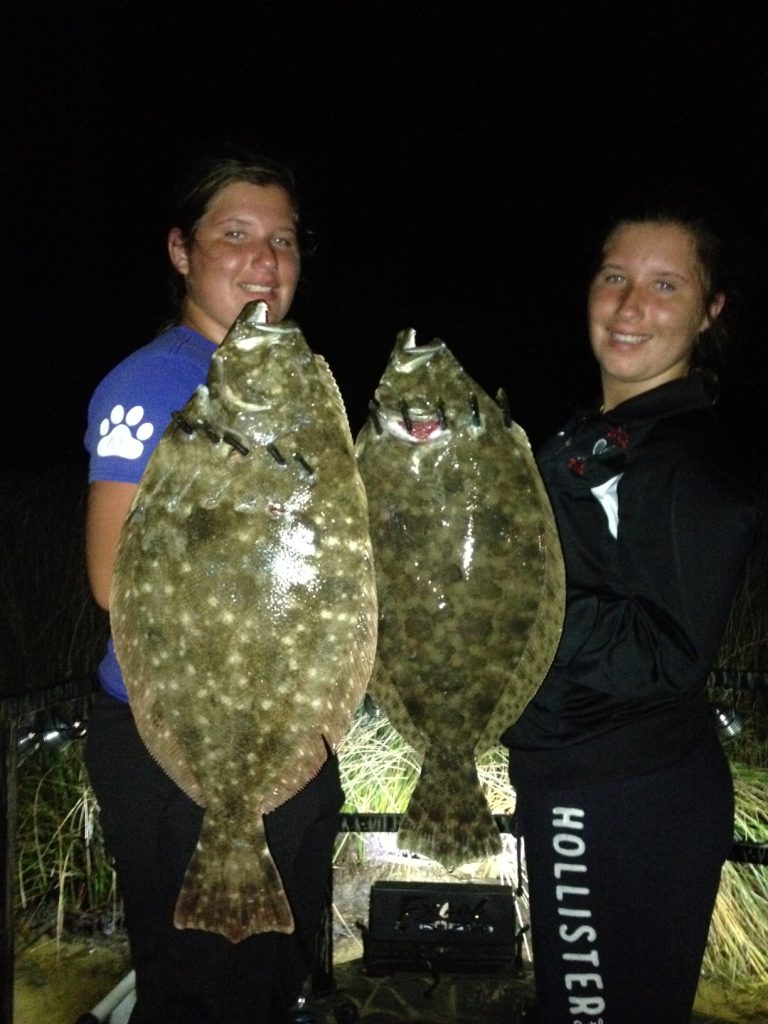 Marie and Maresa learned how to stick flatfish from their dad, Capt. Yano Serra. Photo by Ed Mashburn

Be quiet. This is very important. Don’t stomp and don’t drop things in the boat.

Full moon conditions are not the best for gigging. On a full moon, the flounder can see you coming before you see them. They spook.

Wind. You don’t want wind in your face. Try to go with the wind. This is quiet and the wind pushes you over the bottom.

If running a generator in an aluminum boat, make sure you’ve got a good in-line fuse. A short from a generator will run through the boat and you can’t get away from the shock.

Make sure you’ve got an ice chest ready for stuck flounder and get them in the chest and off the deck.

Have plenty of bug dope. Bright lights attract insects, and the mosquitoes can be fierce during a gigging trip.

Captain Ron Stone tells us, “Don’t try too hard at first. Don’t invest a lot of money on gear until you know you’re going to really like gigging. I started out with a setup that cost maybe fifteen dollars and went from there.”

Captain Ron gives us his final thoughts about flounder gigging. “It’s a whole lot of fun.  I fish offshore and in the backwaters of Mobile Bay, but the most fun is gigging at night. If you try gigging once, you might like it so much that you put away your fishing rod and reel for a gig.”

Regulations for Flounder Gigging in Alabama

Alabama allows giggers to have 10 flounder per person per day. A very important point is that a minimum size of 12 inches for flounder to be kept is in place. This means that giggers need to be absolutely certain that a flounder is legal before gigging it. A gigged flounder is generally a dead flounder, so giggers need to be sure a fish is legal before sticking it. It’s better to allow a marginal fish to swim away rather than kill a sub-legal flounder. An Alabama saltwater fishing license is also required.