Most of the lights from the marinas on both banks of the mouth of Dog River had come on as it was getting close to dark on this cold late–February evening. My boat drifted along with the slow-moving incoming tide — the wind almost non-existent. I was jigging a chartreuse Berkley Power Bait on a 3/8 oz. jig head. The first two trout I had caught were both quality fish probably weighing over 5 lbs. each, but not big gator speckled trout. Over the previous weeks, I had caught some nice fish, and it usually didn’t take long — about two drifts to finds out if the fish were going to bite. 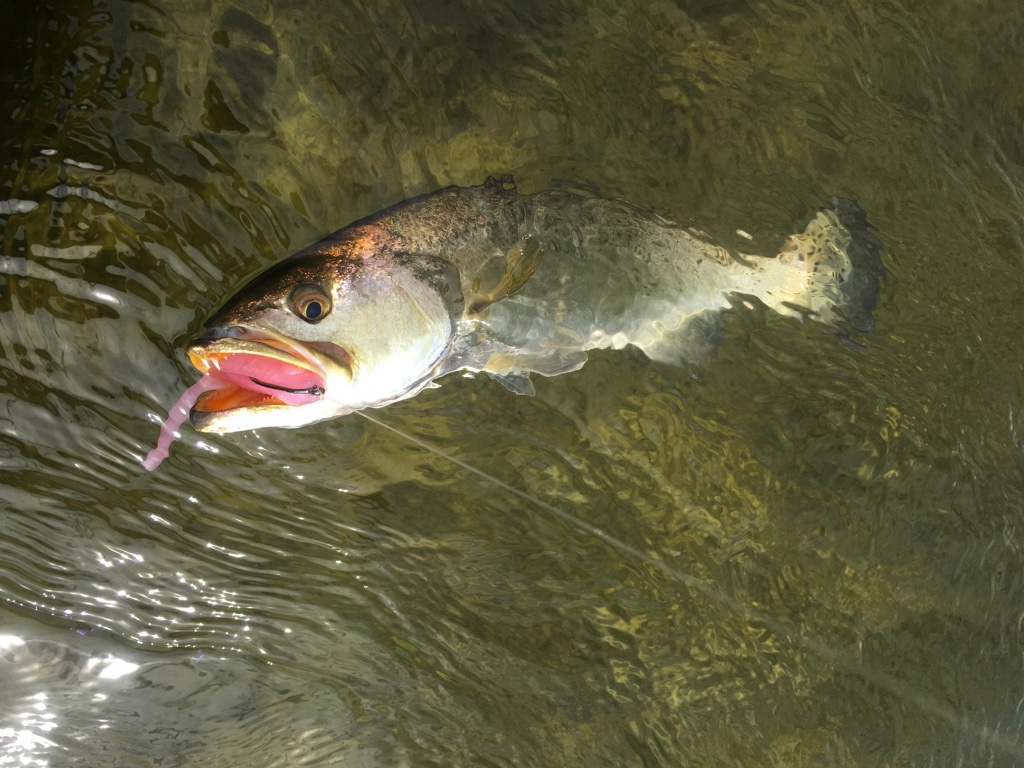 With full roe sacks, female gator trout are going to be at their heaviest in April.

This was one of the evenings that it felt “on” and the anticipation was driving me insane. The bite was like a jolt of electricity and I set the hook even though the fish was probably already on. It was a good one I could tell as there was no moving it at first. Luckily there were no other boats fishing so I could concentrate on the fish and not have to worry about drifting into someone. The fish made a few runs to try to get back down and every time I’d move it would take that much more line back. The fight only lasted for about 5 minutes, but it felt like an eternity. My heart was thumping with butterflies swarming in my stomach.

At last the monster trout rolled up to the surface and I laid the rubber lined net under it and gently laid it on the deck. The trout measured 28.5-inches but what was most impressive was its girth. The fish looked like a football as it was probably loaded with roe; having yet to make its first spawn of the year. I lifted the fish taking one last look at it before preparing to revive and release it when I heard from the balcony of the Grand Mariner  Restaurant “Hey, don’t let that go! It’s our dinner!” I just then noticed the two couples that were watching me land the fish.

“Sorry, this one’s going back. You’ll have to catch your own.” was my reply as I eased the monster fish back into the water.

That was in 1998 and I still remember every detail of the catch. In 50 years of chasing speckled trout (which represents thousands of fishing trips), I have caught 6 of what I consider trophy sized or “gator” speckled trout – those are trout over 7 pounds. Needless to say, that size fish are indeed rare along the northern Gulf Coast. So how does one go about catching a wall hanger speckled trout? Obviously, the fish have to cooperate, but there are a few things that can be done to improve the odds.

There is a saying that goes “Luck is where hard work meets preparation”.  Because gator trout feed year-round they can be caught at any time. All of my really big speckled trout have been caught at different times of the year and while using different techniques. Also, only one came while targeting big trout – i.e. I lucked into the others. The idea here is that there is no substitute for using quality tackle and always having it in tip-top shape because you never know when the fish of a lifetime may be ready to eat your offering. How many times have we all heard about “the big one that got away?” The connection to the fish is the line and even the best line is not very expensive so it pays to keep a quality line on your reel. 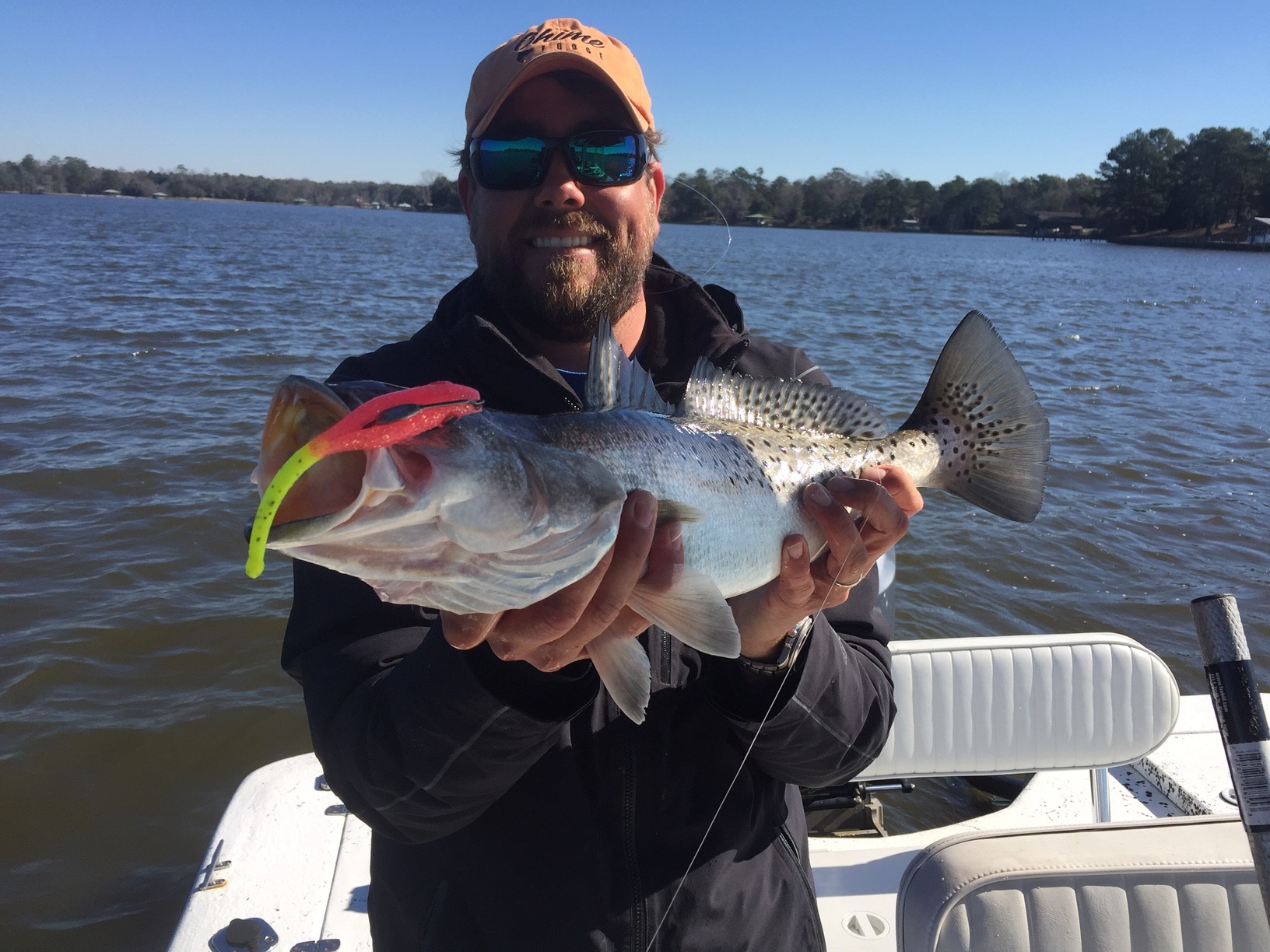 Make certain to sure up your rigging, if you want to land the biggest of the big speckled trout.

Of course, the best line is not worth a cent if the knot is weak. I use five knots and have gotten good at tying them. I have also had the opportunity to test them and some of the simpler knots — the Trilene, Palomar, Loop, Albright and Surgeons. All rate very high at the break. Be sure that whatever is used, can be tied quickly and most importantly effectively, and always check the knot after tying.

All fish are in one of two modes, but never both at the same time. They are either eating or trying to keep from being eaten. When something scares them they won’t eat. One of the things I tell my charters, especially when shallow water fishing, is that the one that casts the farthest is going to catch the most fish. That’s because the fish can “feel” the boat, thus know that something isn’t natural. I set my rods up so that they can be cast a long way by even an inexperienced angler. Being able to cast a long way is of utmost importance when targeting big trout. Also, use the current to your advantage when live-baiting. Letting the bait drift feely away from the boat is a very natural presentation and a very effective way to get the bait away from the boat.

My personal best gator trout and the biggest trout that I have ever had a charter catch have been while wading. By wading, you eliminate the boat and are super stealthy. In both cases, the fish were caught in less than two feet of clear water at mid-morning with a bright sky — not what I would have considered prime trout time. I think the only way we could have caught those fish was to be in the water. They don’t get big by being eaten, so they probably have a keen sense of self-preservation that shuts them down when something doesn’t feel right.

On the subject of bait, the common thinking is to use big baits to solely target big trout. There is definitely a lot of truth to that because by using large baits you eliminate the smaller trout from being able to eat. I am often amazed at the size of a bait that a trout will eat — or try to eat. We’ve all caught trout that are barely bigger than the top water plug we were throwing. 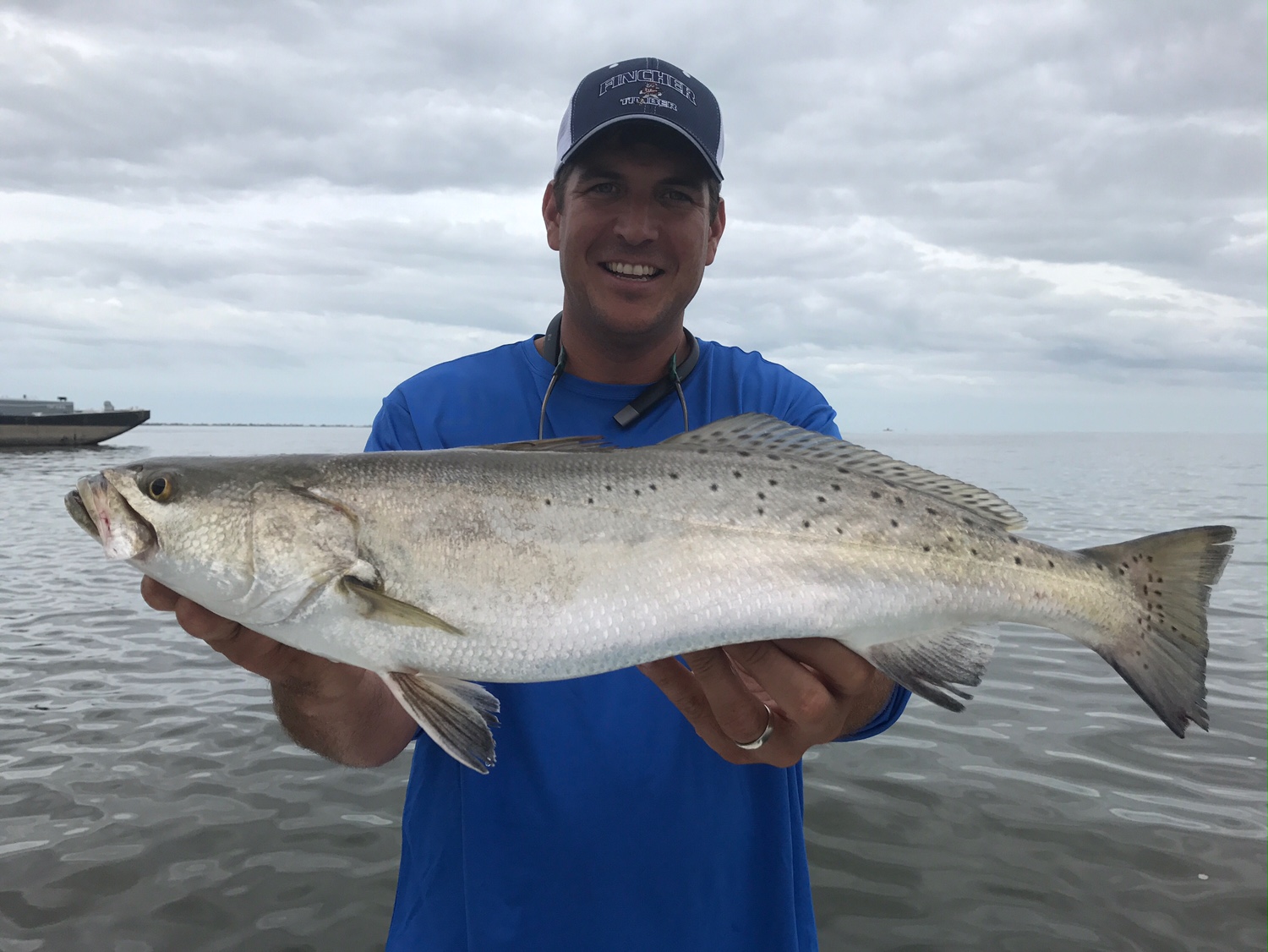 When rigging up your bait, be sure to make it look natural.

The moral here is that you almost can’t use a bait too big. Eight-inch finfish; croakers, mullet or pogies, can and are regularly eaten by big trout. The key though is not to just hook up a big bait and throw it out. The bait has to be presented in a natural fashion. For example, croakers don’t look natural 3 feet under a cork in 15 foot of water, but mullet and pogies do. Shrimp don’t swim up current. So shrimp and shrimp imitations need to be retrieved from up to down current or allowed to drift freely with the current. I mention shrimp because although big trout do eat big fin fish, they still eat a lot of shrimp while they are eating them.

As mentioned, big speckled trout can be caught year-round, but there are times when they are more likely to be caught. Trout spawn on the central Gulf Coast when the water temps are above 62 degrees. Typically, that is from April 1st to mid- October — of course varying based on the weather. The spawn is a regular occurrence — about every 4 days but peaks around the full moon. During the spawn, trout, unlike some other species, feed very aggressively. 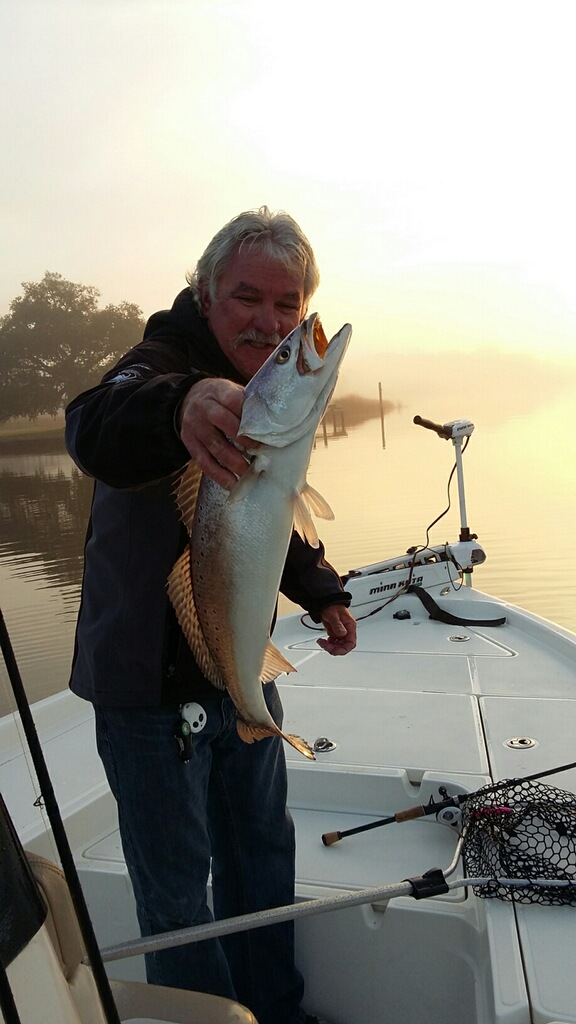 Fishing for gator trout is best done when there is little light, to take advantage of their ambush feeding nature.

On the peak full-moon-spawns that feeding activity is amplified 3 days before and after the moon. Naturally, that is a great time to target them.  Also, the 30-inch gator trout in early April is going to weigh as much as two pounds more than she would in November because she’ll be loaded with full roe sacks. The roe is very dense thus adding the weight. So when I am asked when would be the best time to catch a 7+ pound trout, I usually tell my clients that the full moon periods of April or May would be their best bet.

Again, even though some of my biggest trout have come at different times of the day, I still like to be at my prime area when on a big trout trip at first light, dusk or on overcast days. Trout are ambush feeders and I feel that the low-light provides them with the cover that they need to feed.  Therefore they are more likely to be in said mode.

There is no need to kill a big speckled trout anymore and more often than not, ire of other trout anglers is bestowed upon anyone that does. Nowadays, many taxidermists don’t need the actual fish to do a mount and many people agree that the replica mounts even look better and certainly last longer. If you happen to catch a trophy gator trout, take some good pictures, especially of any unique features of the fish, and release it. Trout of this size are always females and contribute greatly to the population as they are very prolific spawners. Best of luck in your pursuit of that trophy trout and if you decide to use them I hope that these tips are of use to you. 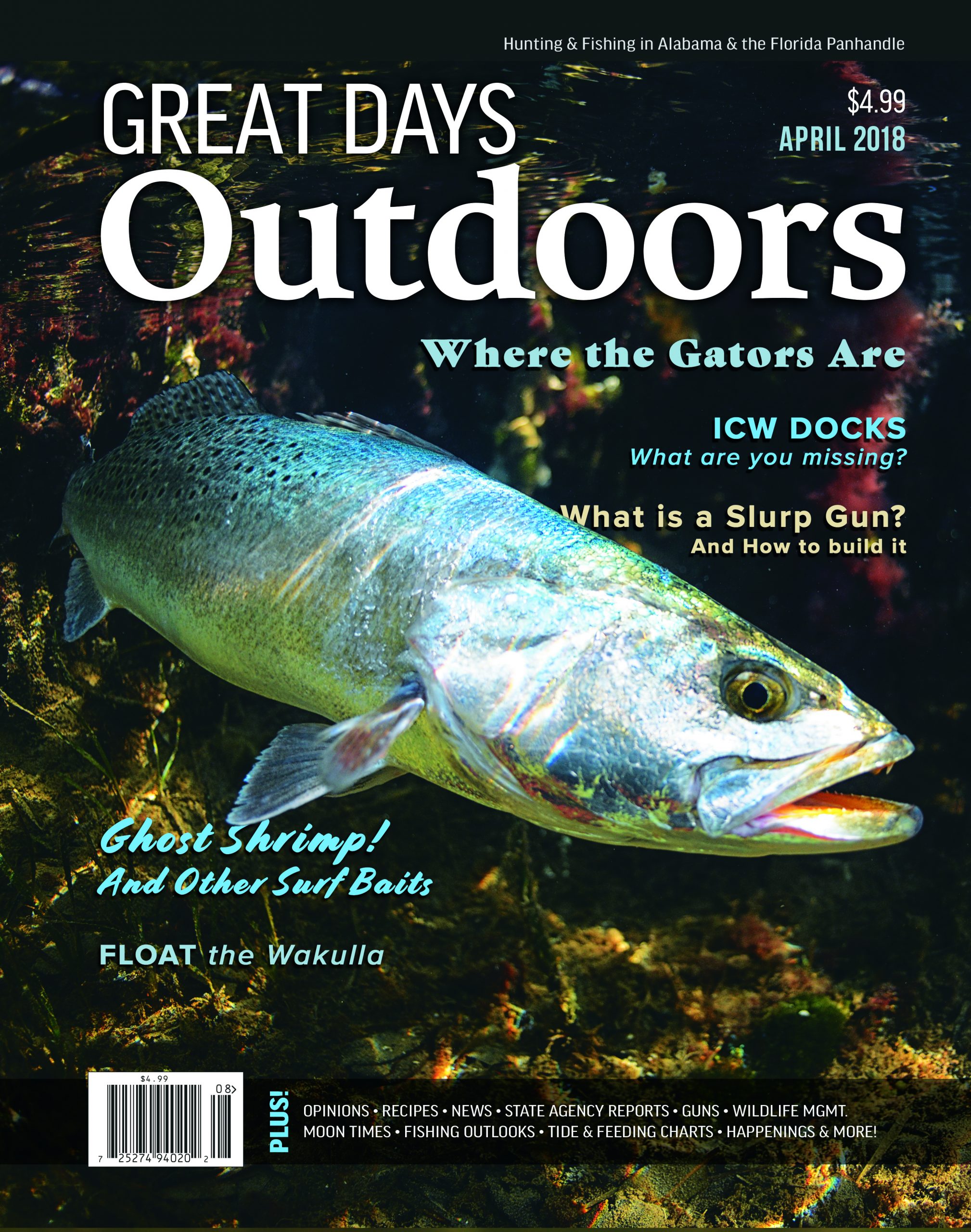 This article first appeared in the April 2018 print issue of Great Days Outdoors Magazine. For more great hunting and fishing content for the deep South, subscribe to Great Days Outdoors print and digital editions or click the image to download this issue.