Get Ready for the Deer Rut | Great Days Outdoors

Get Ready for the Deer Rut

Valentine’s Day is still a few months out, but love is in the air, at least it is for whitetails in parts of the Cotton State. Rutting bucks and does are searching the woods and fields for romance. It is a special time of year for both deer and deer hunters during the deer rut.

During the deer rut, bucks are more apt to follow a doe anywhere. If she ventures across a Walmart parking lot, the buck is sure to follow. However, that old buck may be a little warier than most hunters think. The buck may need a little sweet talking. The right calls at the right time can have him coming in to investigate.

There is more to calling deer than just throwing out a few bleats or grunts. Hunters need to understand how and when to call. Calling deer is different from calling turkeys. Deer will respond, but sometimes in different ways. Using various deer calling techniques during the deer rut can enhance your chances of filling a spot on your tag.

Biologists have discovered deer are more vocal than most hunters realize. There are three basic sounds in the deer vocabulary – the bleat, snort, and grunt. All other whitetail calls are variations of these. That includes bawls, wheezes and clicks, but deer use the three main calls in varying degrees.

“Deer do not call the same every time,” mentions Jared Knight, wildlife biologist and deer hunter from Cullman, Ala. “Sometimes the call can be soft and at other times louder.”

Knight has used various deer calls along with rattling to attract bucks. He says the deer can respond differently to various calls. Hunters have to be alert and attentive when calling as deer can approach from any direction.

Sometimes the deer response is not with a vocalization. They can approach with caution to determine what deer (or hunter) made the call. Sometimes, they may rush indirectly to the source of the sound. If the deer does respond it is usually with a low volume.

Does will sometimes give an estrous bleat. This is a fine, higher frequency call, just like how the voices of most women are a higher pitch than a man’s voice. The estrous bleat is a longer call that can last about three to five seconds. It is more of a “Hey I’m over here,” type call she uses to let other deer know she’s in the area.

“A buck grunt is a deep, guttural sound,” Knight advises. “Sometimes a buck will grunt only once or twice or may grunt more if he is on a doe.”

The snort can be an alarm sound and an attention getter used by deer. Some hunters use the snort – wheeze call to get the attention of a buck when other calls don’t receive a response. However, the snort can also alarm the deer and scare off younger, less dominant bucks. 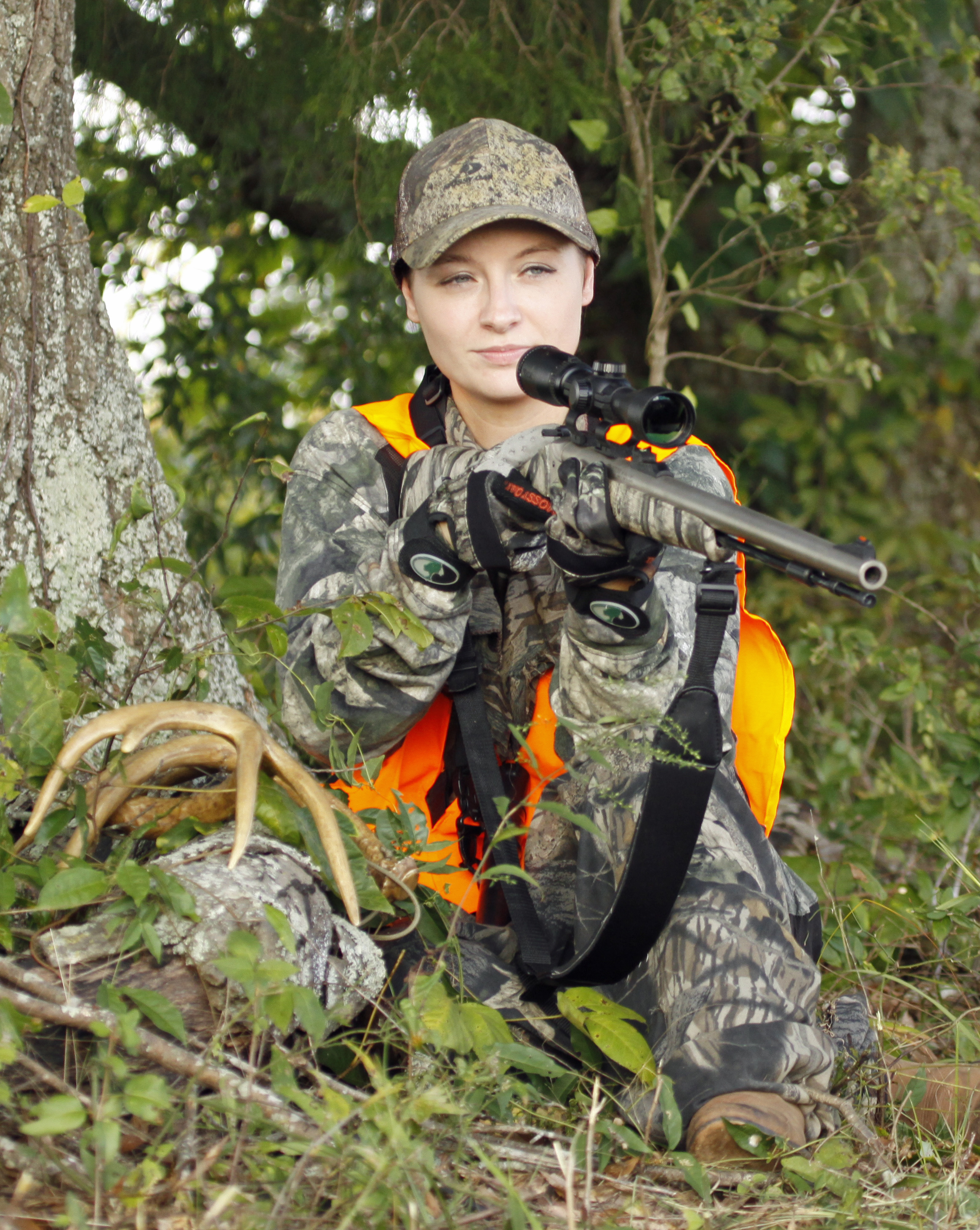 Hunters should be prepared when calling in case the buck makes a quick approach. This photo was taken by Charles Johnson.

Calling For a Buck

According to Knight, the pre-rut and rut are the best times to get a response from a buck. However, deer calls can work at other times too. Deer activity can change from day-to-day resulting in different responses to calling. Sometimes a doe may show up after a bleat or after rattling.

“I’ll stalk hunt from the ground during the deer rut to be mobile. If the deer activity is low I will go to calling and rattling.” — Jared Knight, wildlife biologist and deer hunter

“I’ll stalk hunt from the ground during the deer rut to be mobile,” Knight comments. “If the deer activity is low I will go to calling and rattling.”

Knight mentions he will stay with his calling setup about 30 to 45 minutes. He will mix up his deer calling techniques with a rattle then bleat sequence. Then, he will switch back to rattling and grunting. The change in calls makes the scenario sound more realistic to a deer.

Hunters need to be prepared when calling deer. The response can be rapid and in your face in a matter of minutes. On one occasion while rattling and grunting, an 8-point buck busted out of a wood line straight toward Knight. The young buck came within eight yards of his position. Knight passed on shooting the buck.

Although there are quite a few deer calling techniques, Knight likes to keep his calls and calling simple. He uses a grunt tube, a Primo’s bleat can and a rattle bag. These calls are easy to carry and are effective. He stated the response from deer with the rattle bag has been good.

You may be thinking Knight’s success in calling deer is because he is hunting private land. Nope. He primarily deer hunts public land. He mentions he has had better success calling deer on public land than private. 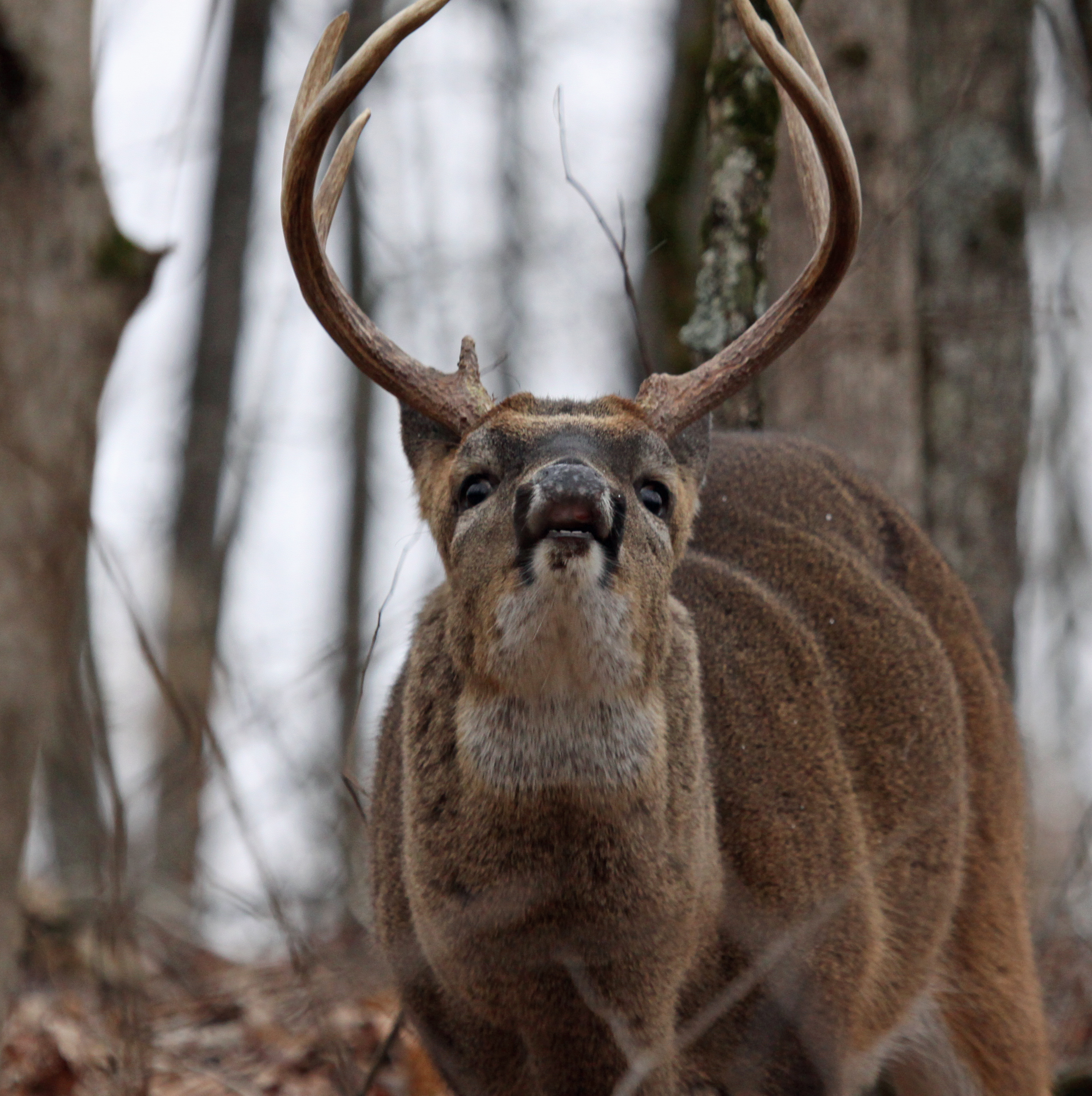 In some instances, bucks may grunt back. This photo was taken by Charles Johnson.

In the human world, to get someone’s attention you may shout or yell at them. However, that is not the case in the whitetail world. A sudden loud noise or call can scare off a buck into the next county. Deer hunters will need to be suave and a little subtle when throwing out their deer calling techniques.

“For me, calling between 7 a.m. and 8 a.m. works the best with grunt calls during the deer rut. Another time calling works is right before dark.” — Jared Knight, wildlife biologist and deer hunter

“I like to start off my calling sequence with some soft grunts,” Knight explains. “If no response, I’ll gradually increase the intensity. With a grunt call, the buck thinks there is another buck in his area.”

Knight says a buck may be close by and you not realize he is there. A loud grunt can put the deer on high alert or drive the buck in the opposite direction. A soft, low-volume grunt will sound more natural and the buck is likely to come in closer to investigate.

Usually, Knight will wait about five minutes between calling sequences. He will mix up his deer calling techniques and the volume if the deer do not respond. Sometimes he will use a tending grunt, like a tut, tut, tut sound – similar to clicking. Then he will throw in a bleat or two.

Some deer researchers think mature does may come into estrous earlier than their younger counterparts. This is good news for deer hunters as the bucks will be on their feet looking for a date. During the deer rut, a buck can show up at any time during the day looking for a doe. However, Knight has discovered the best time that calling has worked for him.

“For me, calling between 7 a.m. and 8 a.m. works the best with grunt calls during the rut,” Knight comments. “Another time calling works is right before dark.”

Knight relayed a hunting situation where he set up about 30 minutes before on a small knoll in the center of a pasture. He hit his bleat can about four times. He heard a sound behind him that resembled a running horse. It was a big buck that ran straight toward him on the knoll.

Part of calling deer is the setup location. Obviously, you will want to be around deer and during the deer rut. This means looking for does. If does are in the area, it won’t be long before the bucks arrive. If a bunch of girls are having a party, you can bet a couple of guys will find out and show up.

During the deer rut, bucks may be a little crazy looking for romance. However, they don’t always throw caution to the wind. Hunters will still need to use wise woodsmen skills. They should be as scent-free as possible and keep movement and noise to a minimum.

Hunters will want to set up in areas does will frequent during the deer rut. Two places are prime spots to start off your deer calling – near food sources and bedding areas.

Does will continue their feeding patterns during the deer rut. Hardwood bottoms and swamps where acorns can still be found are a good choice. Food plots or trails leading to food plots are more good choices. Pine thickets and grownup cutover areas are locales where doe will bed.

“I like to sit at the base of a tree where I can see the wood line,” Knight commented. “My first calls will be low grunts. The grunt call is a type of locator call for deer.”

Knight advises to mix up your deer calling techniques. Change up the grunts, bleats, and rattling. He says no deer call is the same every time. Make it realistic and the deer will come in.

Calling deer is not a magical event where the deer just appear. However, deer are vocal animals, especially during the deer rut. Hunters can use deer calling techniques to their advantage to have a great day outdoors romancing a buck.